With preview season just beginning, it’s difficult to get a good feel on
any individual card, so keep in mind to take everything with a grain of
salt. In general, a 2/2 for two with some upside is a good card, but
sometimes a format is hostile to a specific size of creature. Additionally,
this is a tribal set, so while I am going to assume that these tribes are
supported, I have no clue to what extent.

Anyway, let’s take a look at some Merfolk! 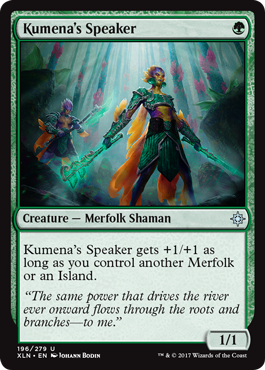 As I mentioned, a cheap 2/2 has very different context in every set. In Amonkhet, this card would’ve had more legs than normal. Now, a
one-mana 2/2 is always going to be pretty good, but exactly how good really
depends on both the scope of the deck and the format. If U/G Merfolk is a
supported aggressive deck, this card is going to be quite good there. Even
more so, it’s an example of a card that is spectacular in one archetype and
not very good in others, which means that that player can wheel a B-level
card.

Now, a one-mana 1/1 is abysmal, so please don’t play this in your green
decks. Even if you have a couple of green Merfolk, the ceiling just isn’t
worth the floor. This card has the most value early, so you should only
play it in decks where you can expect it to be a 2/2 on turn 2 a large
percentage of the time.

Overall, I don’t think this card is going to make me want to be U/G, but if
I’m already in a U/G deck I’ll almost always play it, and if I’m aggressive
I’ll take it highly. 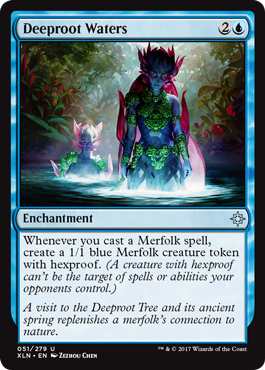 And we have a build-around card for the archetype. Again, how good this
card is is going to depend on how good a 1/1 body is.

If there are multiple
one-toughness creatures at common, this card is going to absolutely destroy
some decks. It definitely has the ability to produce a ton of value, but
how easy is that going to be?

I would say I want at least twelve Merfolk before I consider this card, and
fifteen is where I consider it to be quite good. The way that I look at
this is by asking the following question: How good would the card “2U:
Create X 1/1 hexproof Merfolk creature tokens” be for different values of
X? I would say the card is bad at two, good at three, and great above that.
In fact, it’s similar to Oketra’s Monument.

Oketra’s Monument was amazing, but that was because it could go into pretty
much any deck. Deeproot Waters will play a similar role in a dedicated
Merfolk deck. How early you should take this card will really depend on how
that archetype plays out. It strikes me as the kind of build-around to take
early because of how insane they get in multiples, but given that it will
only ever go in one deck, I don’t think I want to first-pick it. It’s the
kind of card I would like to take third or fourth after I’ve already taken
some blue or green cards to solidify into a Merfolk strategy. 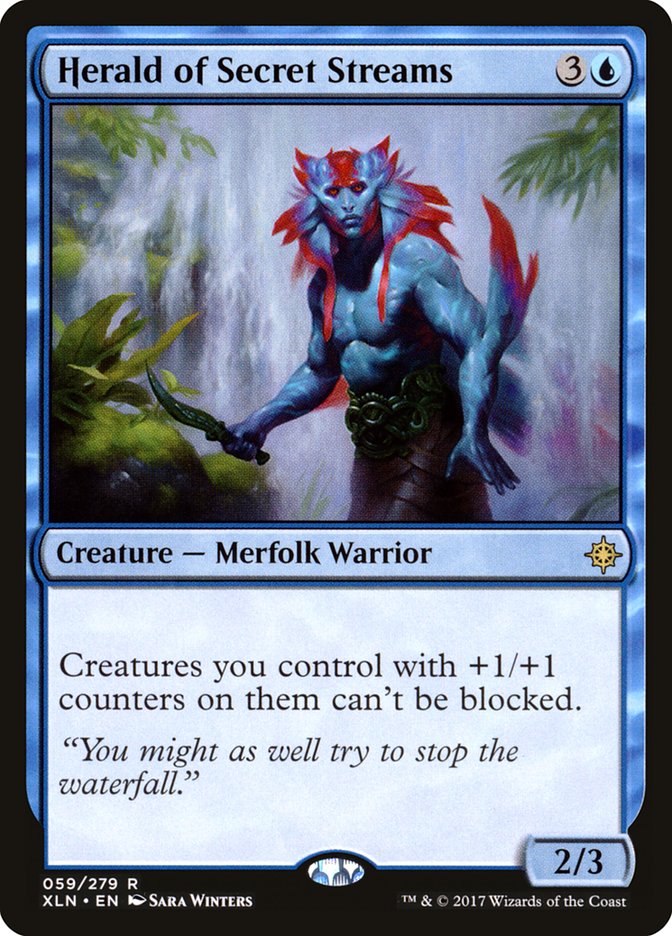 Explore is a mechanic in U/G, the colors for Merfolk in Ixalan.
And given this (as well as looking at some of the previewed cards), I think
there is reason to believe that many Merfolk will have something to do with
+1/+1 counters. That would make Herald of Secret Streams somewhat of a
lord. It’s unfortunate that it won’t work as well as a normal lord with
Deeproot Waters, but be on the lookout for ways to massively put out
counters.

A four-mana 2/3 is pretty abysmal, and I would never put a card with stats
that bad in my deck without a fair amount of upside. But being unblockable
is an extremely powerful ability in Limited. I am going to start by
assuming that this card is so good in the U/G deck that it’s
first-pickable. If you have multiple creatures with +1/+1 counters, Herald
of Secret Streams is pretty much game over. And I think that’s going to be
easy enough in this format, but we’ll just have to wait and see!

Just be careful when you play with the card. Note any instant-speed removal
that can hit Herald of Secret Streams, because that can end in a huge
blowout if you’re not careful. 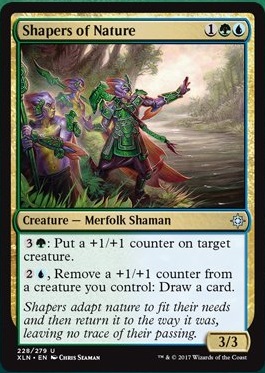 And this card, as it’s the signpost gold uncommon Merfolk, confirms that
+1/+1 counters will be relevant for this archetype. So Herald of Secret
Streams is going to be quite good.

Now, just looking at Shapers of Nature, this card seems pushed. In almost
every Limited set (funny enough, not in Hour of Devastation), a
3/3 for three is above curve. Given this, it’s likely that the abilities
don’t have to be great to make the card solid. And if they are great, well,
then this will be a first-pickable card.

These are the kind of abilities that people underrate. They tend to make
combat nearly impossible for the opponent. This creature may be a 3/3, but
it effectively attacks the next turn as a 4/4. Because it gives counters
rather than a temporary pump, it can snowball too. And if what we’re seeing
from the rest of the cards is right, there should be some cool things in
these colors to do with these counters.

Card advantage is a great way to win any game of Limited. Once you get into
a topdeck war, this card will entirely take over the game, using the first
ability to win in combat and this one to generate advantage when you don’t
have anything better to do. This ability can be broken in combination with
some cards, so be on the lookout for cards that enter the battlefield with
multiple counters or can tap to put counters on something.

Overall, this seems like a card I’m going to take early in the beginning of
the format. While it doesn’t appear to be broken, it’s hard to tell exactly
how good it’s going to be. It will always be good, but there’s a chance
it’s spectacular!