It didn’t take long for people to jump on the Color Identity rule and start making decks with the five now-legal Commanders. Strangely enough, in the aftermath of the announcement, I assumed that Memnarch would be the Commander that most folks gravitated toward making, or maybe even Bosh, Iron Golem, but the majority of the feedback I’ve heard is that they’re running off to make Thelon of Havenwood.

Fellow RC member Gavin Duggan has actually had a Thelon deck for quite some time, and his local guys have been letting him play it. I’ve never seen him bring it out at the Pro Tour, but it’s been some time since we’ve been at the same show together. He calls the deck “Fungus Family.”


True fact:
The percentage of non-land cards in this deck I had to look up was well above fifty. 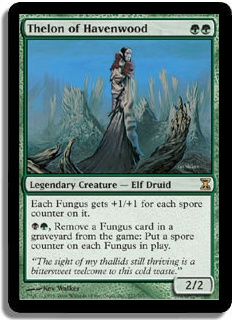 You know it’s going to be a fungus/Saproling deck with this guy in charge (I assume it’s a guy; I can never tell with the Elves). I’m wondering if the activation ever gets used â€” and if so, why there’s no Riftsweeper in the deck to fetch back the exiled stuff.

Acidic Slime: Green is the best color in EDH in my opinion, not even second to blue. The history of Magic is sprinkled with good green stuff, and then we get new, awesome things like Acidic Slime as well.

Butcher of Malakir: Grave Pact on a stick is good, and it’s even better when you have so many little dudes.

Deathspore Thallid: As you know, I’m a big fan of the sacrifice outlets, which prevent people from stealing your goodies. He’s certainly also part of the Saproling Explosion plan.

Dimir House Guard: He can also serve as don’t-touch-my-stuff role, but I’m sure he’s there more for the Transmute than anything.

Golgari Guildmage: Three sacrifice outlets in a row (after Butcher of Malakir). I’ve tried working this guy into decks, but the activations are really expensive.

Mycoloth: Make that four sacrifice outlets. I have a feeling that once this guy gets going, the fungus really spreads.

Nemata, Grove Guardian: I’ll admit a respect for Gavin really sticking to the theme. Maybe he should take a page out of Toby Elliott book and play Muraganda Petroglyphs.

Orochi Eggwatcher: Sacrificing a dude (and probably one that’s already getting blocked) to Giant Growth someone else seems pretty reasonable.

Primeval Titan: Like I said in a previous comment about Eternal Witness, it’d be difficult for me to string together nine words about this card that haven’t already been said â€” even if it’s “This might be the weakest Titan in Standard.”

Psychotrope Thallid: With a name like Psychotrope, I’d think this would do something…crazier. Otherwise, it’s a pretty saucy addition to the deck.

Sadistic Hypnotist: This seems like a bit of a head-scratcher. I mean, I guess with all the tokens, you can effectively recreate the effect of Myojin of Night’s Reach, repeatably, and with a lower cost â€” but in a deck that adheres heavily to a theme, this selection seems to drift a bit.

Savage Thallid: The ability doesn’t seem particularly savage. I’m starting to think the person responsible for naming Thallids was asleep at the wheel.

Savra, Queen of the Golgari: Love this card. Love it. This might be the first deck that I’ve actually seen it also makes sense in.

Spore Flower: Fogs keep you alive. I’m sad to see that Gavin’s not playing Spore Cloud, which completely saved my bacon a few weeks back when Overwhelming Stampede turned what was a moderately good board into one potentially lethal. Spore Cloud also good to inject into a combat where you’re neither the attacker nor defender.

Sporesower Thallid: Pretty straightforward in fitting in the theme. I need a few extra words for this line, so I’ll mention that Facebook tells me I’ve been on it for 549 days.

Sporoloth Ancient: My favorite thing about this card is the cool future art frame. I especially like that frame in foil.

Thallid: Ah, the one that started it all. I certainly hope that Gavin is playing one from Fallen Empires, not the time-shifted one, and that it’s the Jesper Myfors one.

Thallid Germinator: This article is brought to you by Bruce Dickinson’s first solo album, “Balls to Picasso,” and most especially the awesome final cut, “Tears of the Dragon.”

Thallid Shell-Dweller: This guy would attack for five if Doran were in play.

Thelonite Hermit: I’m a big fan of morphs that aren’t automatically either Willbender or Vesuvan Shapeshifter.

Thorn Thallid: For this one, I think the Heather Hudson art is my favorite, since it actually captures the essence of what the creature does. I like the Mark Tedin art, but it’s not particularly thorny.

Utopia Mycon: This made me look for infinite combos, but I don’t really see any.

Vitaspore Thallid: I’m kind of happy that we’re at the end of the creatures. While there are many variations on a theme on Thallid abilities, the variations aren’t particularly broad, making it difficult to have insightful comments, so I’ll just do a quick shout-out to the memory of Ronnie James Dio. 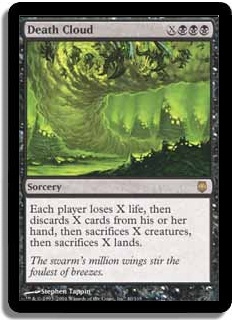 Barter in Blood: A clear winner unless everyone else is also playing some kind of token deck.

Bitter Ordeal: I fully support this card as protection against evil combo decks. And again, it’s on the Future Sight frame, which looks especially cool in black and foil.

Cultivate: A reasonable ramp spell â€” but this deck seems pretty low-costed. I wonder if ramp is really necessary here. On turn 3, you’re going to want to run out more Thallids, and later in the game, you’d be really disappointed to draw this guy.

Death Cloud: One of the few real bomb cards in the deck, it can certainly be a game-finisher. I can perhaps see what Utopia Mycon is there for.

Demonic Tutor: There’s something heartwarming about the classics. I wonder if the choice of what Gavin tends to Tutor for is pretty narrow or not.

Explosive Vegetation: Previous comment about ramp repeated. And this could well be Skyshroud Claim instead.

Kodama’s Reach: Double ditto. Again, it just seems like the rest of the deck wants to keep dropping those Thallids early, leaving little time for this.

Life from the Loam: This is a pretty good card in a vacuum, and I guess it’s pretty good at getting back your good lands.

Life / Death: I love the black part of this split card, for sure. I’d be really worried about getting a one-sided Armageddon from the other.

Primal Command: I have been blown out in my Kresh deck with this card and its shuffle mode.

Reap and Sow: This is ramp I can get behind. There are lands (Academy Ruins, Cabal Coffers among them) that deserve to get blown up.

Shred Memory: Boo â€” graveyard hate! I mean boo for me. Pretty good for this deck.

Sprout Swarm: It’s no Whispers of the Muse, but I suppose it’ll do.

Strength of the Tajuru: Okay, so some of the ramp is making a little more sense, given that there are a few X spells in the deck. Having this and a Proliferate engine running might make little guys pretty big. 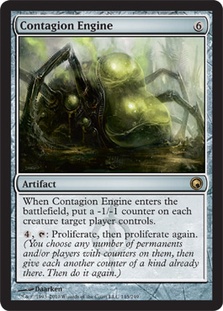 Contagion Clasp: This thing is
so good
against the other token decks. Proliferate is a very interesting mechanic that can take on many different forms. I look forward to seeing if Mirrodin Besieged has any kind of new counters.

Contagion Engine: Speaking of Proliferate Engines, this thing seems like a “destroy it now” or stuff gets out of control pretty quickly.

Eldrazi Monument: An obvious choice in token decks, I’d also like to see it used in more diverse builds, like in Thraximundar or something.

Helm of Possession: I used to play this card all the time back in the early days of the format. I think I stylistically like Helm of Obedience better, but this one is simply better, especially in this deck, where you can sacrifice what you’ve stolen in order to untap and steal something else.

Possessed Portal: I’m on the fence about this card. It’s certainly a great fit in this deck. My instincts tell me it crosses the d-bag line, but I’ll concede that it’s great defense against those decks that draw zillions of cards.

Rings of Brighthearth: Rings plus Contagion Engine means you probably run out of beads at some point. 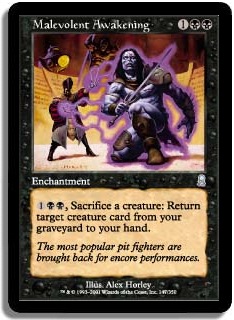 Beastmaster’s Ascension: My kind of card. Get into that Red Zone!!!

Doubling Season: An obvious inclusion, it’s the kind of card that either gets dealt with right away, before it has any chance to get out of control, or stays around forever because people think it’s already done its damage.

Grave Pact: Makes Top 10 of most-included cards in black decks. It’s in a class of cards that I think is very, very good because you don’t have to pay anything extra to gets its effect.

Life and Limb: If I played this card, I would feel horribly exposed all the time. Imagine someone playing Decree of Pain.

Malevolent Awakening: True story: I could picture the art on this card but could not remember what it does. With all the tokens, it seems pretty good, but I’m underwhelmed by Gavin’s non-Fungus Regrowth choices.

Necrogenesis: I still like Night Soil as straight up graveyard hate, but it’s hard to argue with removing that Reveillark target
and
getting a Saproling.

Perilous Forays: Seems a little expensive for what it does, but I applaud the outside-the-box choice.

Pernicious Deed: At first blush, this would seem to be an odd choice to go with all the low-cost stuff in the deck, but sometimes you just have to be able to blow up the world. Warning: do not combine with Life and Limb.

Saproling Burst: I see this card and start looking for Blastoderm and Fires of Yavimaya.

Sporogenesis: Until it gets Disenchanted, this thing is all kinds of wacky fun.

Sylvan Library: The best version of this card to have is not the one from Fourth Edition, but the Italian Legends one so that it’s
even

Liliana Vess: One of the slower-to-develop Planeswalkers, I think I’ve only seen her ultimate go off once. And that time, there was a Kederekt Leviathan in someone’s yard.

Garruk Wildspeaker: All kinds of good in so many ways, and in this deck it’s no exception.

Bojuka Bog: The reported demise of graveyard-recursion decks may have been premature.

Cabal Coffers: Seems silly to run black without it. I see that he’s running it without Urborg, Tomb of Yawgmoth â€” which I think is a fine choice, because someone else inevitably will.

Gaea’s Cradle: I imagine the number of times Gavin had made 50+ mana with this is non-zero.

Golgari Rot Farm: Always a big fan of the bouncelands, especially when Bojuka Bog is involved.

Okina, Temple to the Grandfathers: Evidence that most, if not all, of the underused Kamigawa block Legendary lands deserve at least a second look.

Wasteland: For the mean lands.

Winding Canyons: With this an Orrery, it seems like Gavin has a little fear of hanging himself out there by tapping out â€” yet he’s comfortable playing stuff that’s reasonably likely to get all his lands blown up.

…and there’s Gavin’s Thelon deck. I’d be certainly happy to feature someone’s Memnarch or Bosh build in the near future, especially if the card choices in the deck aren’t all overwhelmingly obvious. I also have an Ihsan’s Shade submission that will make it into print in the early part of the New Year.