Before I knew that there would be roughly fifteen Cluestones in each pack of Dragon’s Maze, I was set on playing Selesnya at the Prerelease because a) it had the highest chance of providing mana fixing, b) the populate mechanic can be incredibly unfair, and c) [author name="Brian Kibler"]Brian Kibler[/author] said it was the best.

As it turned out, not only did I wake up sufficiently late that I was just thrown a leftover Prerelease deck when I arrived during the middle of deckbuilding (Azorius/Boros), but I made the false assumption that there would only be one Cluestone per pack (as had been the case with recent fixing cards like the Guildgates). This made the format significantly slower as players added multiple Cluestones so that they could splash bombs. This was exacerbated by the fact that in many cases with four packs of Dragon’s Maze we opened only one or two “guild” cards from the eight guilds that we didn’t end up selecting.

Let’s begin with a look at the pool that I opened and how (and why) I built it the way I did, and then move into some more general thoughts about the format and how it may evolve.

I’ve separated the pool into distinct color and guild pairings for your convenience.

1 Tithe Drinker
1 Maw of the Obzedat

What’s the first thing worth noticing (aside from my unusual luck in opening mythics)? Other than the two guilds represented by my Prerelease pack, I opened very few “guild” cards in my pool. On the other hand, I opened TEN Cluestones, which my informal poll (consisting of me yelling in the middle of the room and listening for numbers) confirmed to be par for the course.

There were a number of ways I could have taken this pool. Let’s discuss what I did, why it had some problems, and then some alternate builds. But first, I encourage you to build your own deck out of the pool listed here. Sure, this is a typical exercise, but it is applied research. The more we take card evaluations outside of our basic premises and put them into action, the more quickly we can learn which cards are better than we think, which are worse, and which alternate greatly in value based on context.

Ok, if you’re here, you either have a deck or you’re cheating, either of which is fine in this case.

In my haste to eat lunch and build a deck within a short span of time, here is the greed-fest that I registered:

With a combination of Cluestones and Guildgates, I was able to register a relatively consistent mana base that was capable of sustaining Ral Zarek; Savageborn Hydra; Ruric Thar, the Unbowed; and Aurelia, the Warleader. My basic plan, as the deck demonstrates, was to run some bounce spells and the relatively limited amount of removal that I had, play out some Cluestones, and win the game with an early monster or planeswalker.

In essence, this is a control deck that sincerely hopes that the opponent doesn’t have an answer for a large creature.

My experiences with the deck made several things clear. 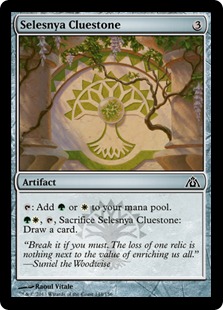 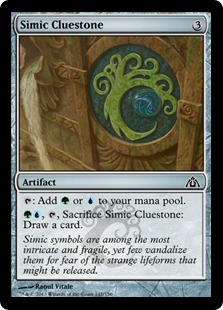 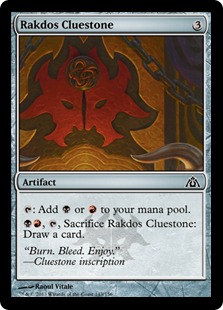 First, the Cluestones are not Signets. The difference between two and three mana, even in a slower Sealed format like this one, is meaningful. Even though they fixed my mana and even though I cut a land (a conservative response; it has been suggested that I should have cut two lands), with six mana generating/fixing cards it was very possible to have an opening hand with a bounce spell and some acceleration only, leaving me to either mulligan or play out the Cluestones and cross my fingers.

In the abstract, I was excited by the ability to draw a card from an accelerator, but I neglected to consider the fact that I can’t draw a card from an off-color Cluestone unless I’ve cast the specific splash cards I need it for and have additional sources of mana (in the case of Rakdos Cluestone, for example, nearly an impossible feat).

Second, this is a slower format than Gatecrash Limited. I included several two-drops, like Keening Apparition, that simply weren’t well suited to this kind of deck. I blame PGDD (Post-Gatecrash Deckbuilding Disorder). Why, in a control deck like this one, was I ignoring cards like Murmuring Phantasm and Doorkeeper? Further, Mindstatic is a solid counterspell for a multicolored deck; it’s easy on the color requirements, and it’s basically a hard counter. 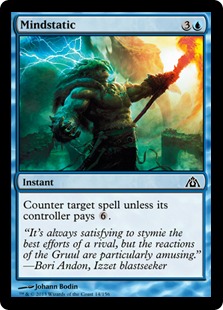 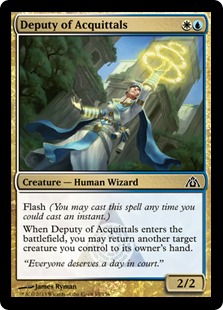 Third, and on the level of microanalysis, although Deputy of Acquittals seems like a 2/2 for two, it’s actually a mid- to late-game counterspell for removal. We shouldn’t really even think of it as fitting into our curve at two mana in the most basic sense because it’s best suited to protect our more valuable assets. In a deck like this one especially it’s important to protect the few meaningful threats that we have.

Still, though, this deck (as I learned) can lose to decks on both extremes of the aggression spectrum. It isn’t quite powerful enough to defeat an aggressive Boros, Gruul, or Orzhov start, nor can it really handle a deck with a lot of unconditional removal because it runs few creatures, all of which cost enough that our opponent will have time to locate a response.

So let’s take a step back and forget about the Cluestones. Let’s assume that we can actually play our bomb rares without just running a pseudo-control deck and some three mana accelerators.

The primary weaknesses of the greedy control deck are that it has a lot of tempo (i.e., Dramatic Rescue) but few ways to permanently deal with a creature. If it can’t stick a Ruric Thar, the Unbowed early in the game, it can run into trouble. Likewise, it can be almost impossible to win against removal because it has so few threats that demand an answer.

Is there a way to play a more creature-focused deck that still runs all of the mythics?

This was the other option that I had in front of me, which I perhaps should have registered.

Although this deck is also relatively light on early drops, by the time it hits six mana it has the ability to drop a number of meaningful threats that have a much better chance of survival because other cards like Assault Griffin, Armored Wolf Rider, and Battering Krasis pose actual clocks as well. It may very well be correct to include one or two Cluestones instead of a few of the four-drops since this deck is fairly clogged at that spot. That would also allow us to play our best threats on turn 5 instead of 6.

This deck also has the ability to run the more aggressive enchantments that were in the pool. Gleam of Battle is a very expensive card to run out (generally, we hope that an expensive card in Sealed will have an immediate impact on the board). However, as long as we have the ability to attack—not even necessarily into favorable trades, but into a neutral combat phase—we have the ability to swing the game in our favor. Gaining a +1/+1 counter for every attack is no Conclave’s Blessing, but it can quickly turn a Concordia Pegasus and Steeple Roc into unmanageable threats. This is doubly true if we have resolved a Gruul War Chant. 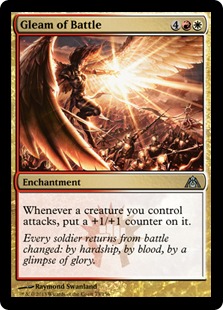 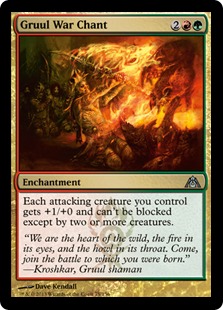 In a Draft format, I don’t think that this deck would be considered aggressive enough to run either of the combat enchantments we just discussed, but it seems as though the release-style Sealed events for Dragon’s Maze are much slower—there are many high toughness creatures relative to other sets (instead of Streetbreaker Wurm we get Armored Wolf-Rider, for example). This makes it especially attractive to run these slower, attrition-based enchantments.

One possible direction in which I didn’t experiment revolves around a high volume of expensive cards, Cluestones, and whatever removal we have. In my initial deck, I focused on the Cluestones as a means of accessing a more consistent mana base to play out the strongest creatures that I opened. However, I also had a few other five- and six-drops that I didn’t include in that build because I held to a “traditional” concept of the kinds of things that should be in a Limited deck.

It may be possible to run a lot of Cluestones (as many as seven or eight) and then the most expensive and powerful cards that we can force into the mana base. In this mode, cards like Maze Abomination and Maze Behemoth are probably auto-includes, and this deck suffers from the same issues that ramp decks before Primeval Titan suffered from: the ability to draw all threats or all ramp spells but not the right combination of the two.

At first blush, however, it seems as though Dragon’s Maze Sealed and the ensuing Draft format will be highly variable formats that avoid the problems that plagued the relatively linear Gatecrash Limited before them.

One of Magic's iconic lands is also among its biggest rule-breakers. Patrick Sullivan explores Commander favorite Maze of Ith, an early lesson in how not to design a land.
View More