There’s an old comedy writer’s adage that says, "Never start a scene on a closed door."  While meant to suggest that a closed door slows down and/or destroys the pacing of a comedic story, it can be applied more broadly—always start with an opportunity in mind. Those opportunities that arise from unlikely places are often the most exciting and the most fruitful. Whether it’s external forces, internal motivation, or a stroke of inspiration, we are able to accomplish a lot with a little spark.

Part of my task as a writer for you all is to find those opportunities nestled between the cracks and shadows of the more popular juggernauts we throw around on a week-to-week basis. This week I’m turning the knob on a reprint: 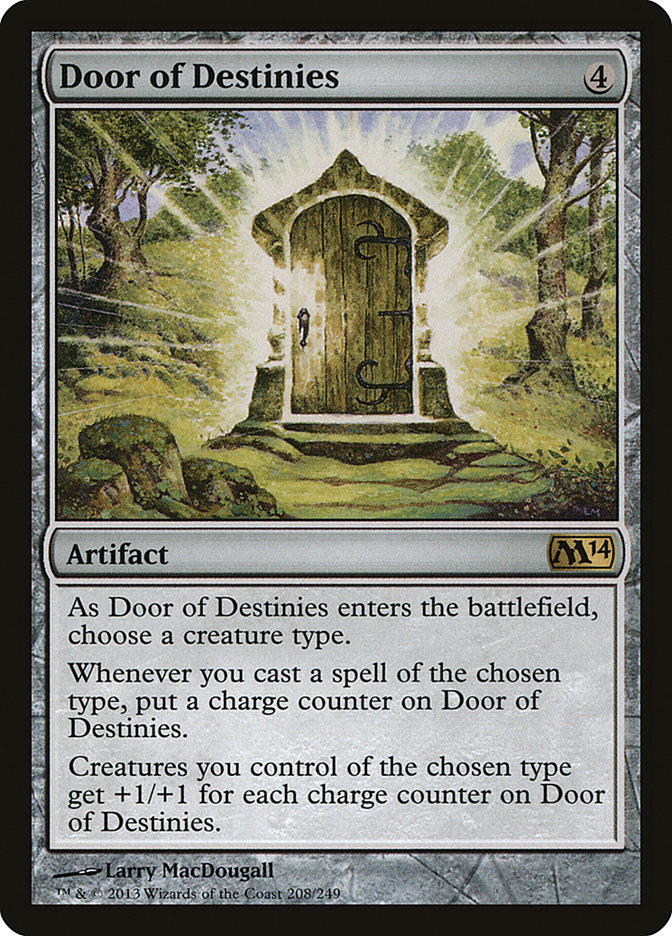 Tribal themes have always been a favorite of mine. The first time I saw a "target Beast" or "Zombie creature card," I knew I had begun a journey down one of my most memorable paths in my Magic career. Along with the reprint of Mutavault, which is mostly used for its 2/2 for one . . . ness, tribal themes can span across any color in our current Standard.

Shortly after its release, I noticed several Sliver decks that utilized them in the main or on the bench, as well as an occasional inclusion in a Human build. Door of Destinies, however, is best utilized in two situations. For each situation, I’ll present at least one deck.

The first situation where Door of Destinies flourishes is when the ability to cast a creature spell multiple times can allow you to make any creature you resolve to be powerful. Enter our first tribe. 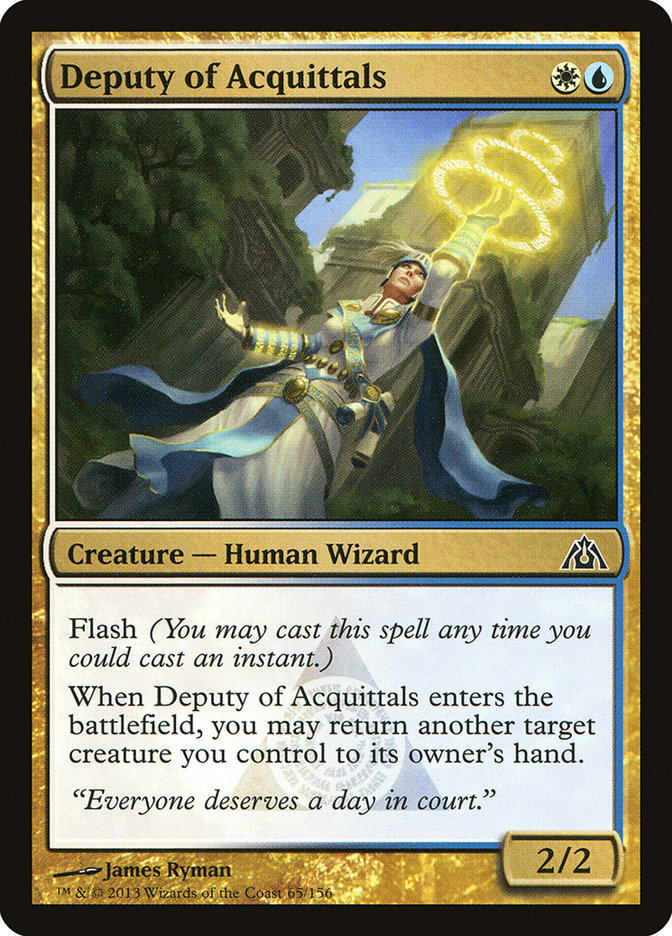 Go ahead. Try and shoot the sheriff.

As opposed to taking the possible Human route, I’d rather take the more exotic one and pursue class over race. Wizards, although weak, often have tricky abilities that give them extra usefulness on the battlefield. Let’s open our books and figure out how to get the most use out of these arcane allies.

That’s a lot of creatures for a blue deck! Well, in a normal blue deck.

Realmwright is first up, and he fulfills the important roles of being both a blue mana fixer and a 1/1 Wizard. Fugitive Wizard or the more hysterical Scornful Egotist (ALL HAIL SCORNFUL EGOTIST!) have come along nicely in this terraforming package. Most decks can find a better one-drop—but not this one. Deputy of Acquittals is a high-value Wizard. Naturally, she can save any of your creatures from getting smitten, either by a sweeper effect or from a good old curb stomp. More than that, though, if you have a copy in hand and on the board, you can loop them to ratchet your Door of Destinies to overload status. Wizards have never been known for their muscle, but these powerful magi can pump them up to thwart powerful Beasts and Hydrae.

Omenspeaker is a great anti-aggro play just like the nearly forgotten Augur of Bolas, but I’d still take the Omenspeaker over that Merfolk thanks to the 26 maindeck creatures we’re sporting. It benefits wildly from a Door, scaling well to X/X+2, which are frequently excellent stats for surviving combat.

Warden of Evos Isle looks pretty funny here; the observant readers probably noticed that it offers no reduction to anything but itself and Ascended Lawmage. Be that as it may, it is still a cheap, scalable, and evasive Wizard that can quickly grow to stop a Dragon. Speaking of which, Ascended Lawmage is still a really tough cookie to crack. A 3/2 with hexproof and evasion is great, and every point the Door has makes this creature a more intimidating threat.

Prophet of Kruphix is a card that although I’ve fiddled with it a bit since has not yielded the results I’d been hoping for, though others in my shop and in larger scenes have done better with her. Play when your opponent is tapped out, untap your field, and be prepared to flash in all manner of blockers and spells. In the midgame the ability to add (or subtract) creatures from the board will allow you to get extra value and invalidate your opponent’s sorcery-speed plays. I just wish it were one less.

Prime Speaker Zegana is still a powerhouse, and she comes with an added benefit. Even on an empty board, an active Door of Destinies makes her come in and draw you a fresh hand, extracting her power instead from the counters on the Door. By herself she’s a house on the ground, and the ability to resolve her after slamming down a Prophet is oh so exciting.

Two odd singles round out the creature base: Archaeomancer and Azorius Justiciar. Archaeomancer honestly looks pretty funny in a deck with ten instants, but each one provides a lot of value, and the sideboard offers nine more, making it useful pre-board and even more useful post-board. Being able to rebuy the Archaeomancer to snag a counterspell feels pretty good no matter how competitive your venue. Azorius Justiciar can either provide the window to sneak past two blockers or act as a mini Fog if cast during the beginning of combat step (assuming your Prophet is up and about of course.)  It’s an oddball, but the amount of draw and scry available to this deck means you can tuck it if it seems irrelevant.

The three maindeck noncreature spells explain themselves. Azorius Charm is your standard utility spell, but every mode has a purpose. Its Time Ebb can buy you time, the cycle ability is never dead, and giving your swollen Wizards lifelink for the turn it matters can keep you afloat when times are tough. Dissolve is the new Dissipate, and Cancel’s never been bad. Three copies of Door of Destinies made it in; although there is significant card filtration occurring, I still want to hit one, and I foresee a lot of quiet turn 4s where the Door can be unlocked.

The sideboard is nothing special. Tidebinder Mage is definitely the best clutch player against those tough-to-beat aggro decks, and he still pins most anything down that can’t be effectively blocked by your team. Simic Charm, which stands in as Deputy of Acquittals #5-7, protects your team from getting flattened or provide extra push to close the game. The fourth Dissolve and two Negate make up additional counter support, and Naturalize, which is seeming more maindeck worthy by the minute, makes it in three times. Ascended Lawmage and Archaeomancer also appear once apiece, ready to come in against mono-black or control respectively.

Secondly, Door of Destinies adds a colorless ability to permanently augment a team that loses their power as a game progresses. If you think of any one tribe that comes out fast early, I bet we think of the same one: Goblins. 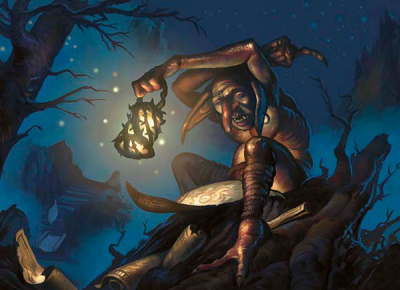 Since their inception Goblins have been formidable thanks to their numbers, not their power. While the current Standard retinue for Goblins is not as impressive as it was in Onslaught or even now for Legacy lovers, it provides the right balance of costs and abilities to be fun and interesting nonetheless.

Unlike the subtle intricacies of the Wizard deck posted above, the Goblin deck is relatively . . . straightforward. However, the Door strategy really shines with one of its cheapest drops, Legion Loyalist.

Every time you activate battalion with him and a decent Door of Destinies online, you should win the game. Trample, something that’s fairly useless for a creature with one or two power, gets immensely better when you consider how large the army you’re sporting has become. The first strike is frequently helpful, and even a 4/4 with first strike dies to very little outside of green in the format. The rest of the deck is direct and unyielding; there weren’t tons of choices to confound this list.

Another essential piece of this puzzle is Chandra, Pyromaster. Goblin decks and red decks in general are notorious for their lack of relevant, reliable card draw. With Chandra’s 0 ability, nothing will be out of reach when you turn that exiled card up. Its +1 helps you more carefully toss a Goblin through the defense; two Goblins in this deck, Riot Piker and Hellraiser Goblin provide nice bonuses at the cost of constant attack. The burn spells provide a slight bit of depth to the deck, but they are easily exchanged for the sideboard cards, which are also pretty simple.

Pithing Needle and Ratchet Bomb routinely provide colorless answers to any deck, and there aren’t any real Goblins to speak of outside of the ones listed here so I feel safe stocking the board with specific answers. In my experience, every monocolored deck mono-red needs depth against another aggro deck, and Trading Post fulfills every need; it recovers smashed Doors and Ratchet Bombs, seals gashes in your life total, and can turn dead Doors into another card. Burning Earth is a must for any red sideboard; if you’re not playing it, you’re just asking for trouble. I try not to ascribe to must-include cards for well-known archetypes, but Burning Earth provides a stone-cold answer for any three-colored deck opposite you.

Goblin Rally is embarrassingly a card I have wanted to include in a lot of brews. It’s a red Conqueror’s Pledge, and I’ve missed that card since it rotated. Here, if you find yourself with even a two-counter Door, you’re making twelve power in mono-red. There are tons of decks where giving your opponents four weaker targets is much better than one stronger target, namely mono-black or any non-sweeper, non-trample deck for that matter. Two more copies of Chandra round off the last spots where that free card each turn will really help you out of a grindy match. I kept trying to think of a better draw for this deck, but nine times out of ten, Chandra was pretty good.

Each of the two decks above provides you a budget-level opportunity to try the Door out; except for lands and the stray Chandra, you’re looking at complete decks for the cost of a decent steak.

I know there’s a lot of tribal lovers out there, so this week I want to reopen my old weekly competitions where I request a deck from you all! Door of Destinies is a versatile card that has seen uses in casual play since its release six years ago, and I’m willing to bet you’ve sleeved it up yourself. Share your Door of Destinies deck or brew your own for this week’s Untapped Challenge!

Besides the two lists I brought you, I thought of three more viable Door of Destinies decks in Standard, so I know you can think of many more! Use the entire stable of Magic creatures and submit your decks to [email protected] by 11:59 PM on December 7, 2013. I’ll choose one or two of my favorites and share them with you all next week.

I hope you’ll contribute a fun Door of Destinies deck with your favorite tribe leading the charge. I’ll also be bringing you a found combo next week, and we’ll flesh it out into a full deck.

Thanks for reading, and don’t forget to untap!