At first, I tried to play a bunch of evolve creatures and go all the way up to six mana for Prime Speaker Zegana, which quickly turned into Aetherling, but it became clear that this wasn’t realistic without card draw supplementing the mana base. Those slots would not help you evolve efficiently and led to broken draws, while you were an exceptionally bad Aetherling deck if you did stick one.

It would have been ideal to get a quality five-drop, especially one that didn’t punish overcommitment to the board. However, this was Block rather than Standard, so instead of the exact card I wanted being the most obnoxious creature in Standard (official name: Thragtusk), there was nothing available at all, so the curve peaked at four. Unfortunately, the deck didn’t have high enough card quality or velocity and was taken apart by Supreme Verdict since only Experiment One was resistant to it, but I reluctantly gave up on the concept.

Sam Black then built a variation on Jund Aggro that centered on Renegade Krasis. By using Thrill-Kill Assassin; Lotleth Troll; Exava, Blood Witch; Rakdos Cackler; and Hellhole Flailer, you could make teams surprisingly large and conveniently hasty, with Corpsejack Menace as the other four-drop. This deck wasn’t quite as good as the more hasty and aggressive Jund Aggro builds, but it showed me the cards that were missing from my Simic build: Corpsejack Menace and Lotleth Troll.

Lotleth Troll gives the deck far more resistance to Supreme Verdict and a much better early defense to aggression, while Corpsejack Menace is sick in combination with many of the Simic cards the deck was already using. Once it became clear that Vorel of the Hull Clade is absurd when you fully commit to it and that Master Biomancer is terrible because you do not have that kind of time, the maindeck came together into its natural state:

There are a number of very sick things you can do with this deck because doubling effects work very well when piled on top of each other. Often you end up attacking for twenty or more, and 60 or more happens once in a while thanks to Vorel of the Hull Clade. 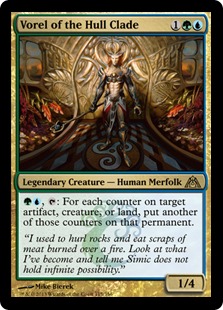 Vorel of the Hull Clade with any guy that starts with counters will take over the game unless they stop you, even without any help, since a lowly 1/2 Cloudfin Raptor will do two, then four, then eight, then sixteen. Vorel of the Hull Clade evolves all your creatures when coming into play—twice if you have Renegade Krasis—so you’re usually at least one turn ahead of that. Doubling up a Lotleth Troll is excellent so you get trample and regeneration, and Experiment One is the safest target since it can now regenerate an arbitrarily large number of times and dodges Selesnya Charm.

Combine this with Corpsejack Menace and things get out of hand far more quickly: one counter becomes three, then nine, then 27, then 81. With two Corpsejack Menaces, which happens every so often, one becomes five, then 25, then 125. 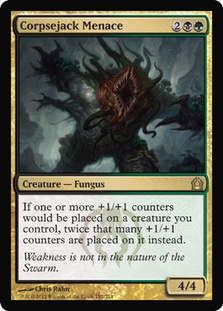 The default is to have the evolve curve and ride it to victory. With a Renegade Krasis on turn 3 and a Corpsejack Menace on turn 4, all your guys will get four counters, which is either fatal right away or fatal shortly thereafter. If you are forced to use a Deadbridge Goliath or a Vorel of the Hull Clade, you still are punching far above your weight in casting costs and should overwhelm opponents who don’t sweep your board. In general as long as you get a mix of different creatures, there are few combinations that when sequenced properly do not do sick things.

You can’t sideboard too much without breaking the deck, so the choices for it narrowed quickly. Against red in particular and Boros Reckoner in general, Murmuring Phantasm provides a quality blocker that can take it or another attacker out of the picture. It isn’t ideal against Firefist Striker, but you do have lots of creatures that can help with that. Because Murmuring Phantasm is 0/5, it reliably evolves your guys, which means that it can take the place of more expensive cards without breaking the deck, allowing you to lower your curve safely. Combining that with Abrupt Decay for Firefist Striker and Boros Reckoner means that you can defend against absurd starts and buy time for your guys to get far bigger than their casting costs would suggest, after which victory follows quickly.

Against control, Whispering Madness serves a similar function of providing another angle without breaking up the flow of the deck. If Whispering Madness would strand you without the ability to progress, all you need to do is cast Whispering Madness. This is a great response to Supreme Verdict since they have to tap out and you can usually keep one guy around. Often it’s Lotleth Troll, which is absurd with Whispering Madness and no other spells because you dump your hand, draw a new one, dump your hand again unless you want to keep it, draw a third hand, and smack them for about ten, and now they have one or two turns to deal with a giant regenerating monster.

Whispering Madness can also be used proactively since they’re much more likely to have Supreme Verdict in a hand that they sculpted from a starting hand that they didn’t mulligan than they are to have it in their new hand, plus most blue decks don’t have that many counters.

In Block Constructed, unfortunately, this deck turned out to be very badly positioned. The Esper Control players naturally wanted a lot of cards that were the perfect supplements to Supreme Verdict, making game 1 very difficult and even game 2 problematic. Meanwhile, Mono-Red Aggro was just aggressive enough to cause you problems by playing more creatures than one can block at the same time combined with wins off of Boros Reckoner chains. With those twin issues and the large mana requirements of the deck, even a deck this powerful and off the radar can’t compete, which was a pity.

It’s not impossible that you could sneak back in because maindeck Sin Collector is always going to be a blank against you, Aetherling is infinitely less scary than Angel of Serenity, and the Esper Control decks are going to be warping to beat themselves, but Blood Baron of Vizkopa is no fun and Supreme Verdict is still a nuisance, so it is highly doubtful. It is possible that you can maindeck Golgari Charm where they have to be more reliant on Supreme Verdict and your deck has more room to put in spells.

The good news is that Standard beckons. Standard offers you two things the deck desperately needs: more resistance to sweepers and better mana. The M13 lands replace Guildgates and several of the basic lands as well in an easy swap, at which point your color is excellent because your requirements are low. It is likely that you can go down to 24 lands since the 25th land in Block was as much about getting untapped lands and colored mana as it was about the activation costs of your cards. Thus, the deck gets to look like this:

I have not yet tested this in Standard because there is no time for such matters before a Pro Tour these days, but I do plan to give it a shot. I’ll likely radically alter the board, but Rot Farm Skeleton lines up very well against Restoration Angel and Thragtusk even though it’s obviously not as good a card.

When sideboarding, taking out one copy of a bunch of different creatures is often good because drawing two of the same one exposes you to Detention Sphere, reduces your sequencing options, and doesn’t evolve properly. When lowering the curve, you can take out four cards that cost four or more provided you replace them with Murmuring Phantasm, and you can take out two- and three-drops for Abrupt Decay.

If you have an opponent who is full aggression, you can take out copies of Renegade Krasis aggressively because you don’t need to go there to win—just use Abrupt Decay and walls to survive long enough to get to Thragtusk and enough evolving to attack them back, and the life should free you of the worry that they’ll block with Boros Reckoner and shoot at your head. Still, this obviously requires a lot more testing.

Like many of the decks I build, this is very good at plowing through what people consider normal strong resistance, like Huntmaster of the Fells, Thragtusk, and Restoration Angel, by going over the top of them. Olivia Voldaren is an obvious serious problem if they have time to do that, but you evolve your guys as fast as Olivia gets bigger. So in order to punish you, they need to buy time to steal Vampires, which is very scary against Simic since if you have Simic Charm or another bounce spell, they lose the game often in that spot. The list above does not have such cards in the maindeck, but there is room for one or two spells in the maindeck. They could easily be bounce or even Putrefy depending on what you fear, although I don’t recommend such things.

Given this is Standard, the obvious thing to do with the sideboard is to move away from Whispering Madness towards more traditional answers like Duress and Tormod’s Crypt. Reducing the card counts tends to be bad for you since your strategy is linear, but many of these decks can’t beat you without their key strategies working. So such approaches are worth trying, but one must be open to the possibility that they do not improve your chances. It’s also possible that Putrefy deals with Standard’s threats better than Abrupt Decay, which makes that an easy swap; the mana in the deck is much improved, so the casting cost is less of a concern than it was in Block.