Christmas is a great time of year—lots of snow (or if you’re where I’m currently writing this, balmy March temperatures,) sharing time with your family and friends, and a healthy dose of enchiladas home-cooked food. Well, okay, the holidays are different for everyone; everyone has their annual traditions, and they often make or break one or two each year. One tradition that’s always amused me is the yearly tradition of Wizards Holiday Promo cards. This year’s is fun. 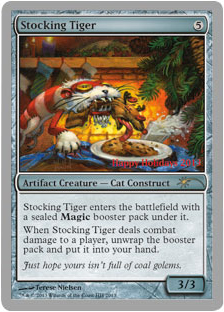 A play on Stalking Tiger, this silver-bordered card offers a fun diversion from the hustle and bustle of tournaments with which we’ve become accustomed. Oh, and also I feel like we can take a break from normal Standard brewing and jot up a casual list by the fire. Stocking Tiger offers a ton of awesome possibilities, and I want to take aim at a list. Let’s fill that stocking!

The deck’s goal is to power out a bunch of artifacts and leverage the all-colored nature of artifacts to do anything with the booster pack you open! Slide Mirrodin packs under your Tigers for added effect.

For Christmas, family and friends come together. You get the opportunity or for some the "experience" of interacting with all sorts of people—young, old, friendly, grouchy, and of every shape and size. Part of the joy of the holidays is that when you gather together you’ll always have a unique diverse experience; no one in the world can claim to have the same experience, and although there might be some disagreements and awkwardness, everyone benefits from every member of the group whether you know it or not.

You know what other family is worth more than the sum of its parts? Slivers.

Slivers have been around for most of Magic’s history, and everyone has a funny story to share about Slivers, especially if they’re on the dealing end of them. Since their recent resurrection in M14, I’ve been attempting to flesh out a Standard-legal version that I’d be pleased to play, and I’ve encountered a couple excellent versions in my search. However, we’re going to widen our scope a bit to include the past decade of Magic; Slivers’ brief reprisal with Time Spiral Block gave us dose, and if we put them both together, we might just have what we need.

Sliver decks have never allowed themselves to be too complex, so we’ll take this one with a bit of a stride.

This one might seem strange, but there are only a couple semi-decent one-cost Slivers, and this is the best of the bunch and conveniently in green like the other good Slivers. The poison isn’t irrelevant; against a Soul Sisters / life-gain deck, you have a maindeck answer for their nonsense. Unlike infect, you still deal normal damage when it counts. The triggers stack, so a pair of Virulent Slivers deals effectively four damage on impact.

The classic Sliver lord combined with the new global pumper is the perfect pair; creating redundant effects is crucial to being consistent, especially for a creature deck in this fast-paced format. Similarly, the mana makers supplement a low-land draw and fix for the five colors Slivers so desperately need. One thing I love about these two is that they’re hidden mana. Your opponent will forget about them even after you tap out. As such, always tap your lands first and hope for the best in this deck.

Blur Sliver and Sliver Legion each play a particular role in the deck. The first is purely utilitarian—the ability to apply pressure with itself and/or any other Slivers you play after it will make sure you stay relevant out there. It also lets you play your hand faster if you have a mana Sliver for what that’s worth. Sliver Legion is just short of a Fusion Elemental that also helps every other Sliver immensely. The fact that it’s huge on its own doesn’t hurt, and it’s the perfect alpha strike on turn 5. You can hustle him out two turns earlier for a classy 9/9!

This deck is filled with four copies of every creature, and that doesn’t change in the spell department either. Aether Vial, a classic in another certain tribal deck, fills in well here to flash in any creature while keeping your mana open for the other two spells. Boros Charm and Golgari Charm play similar roles, saving any one of your team from the killing stroke. Boros Charm is a solid finisher and closes out a game quickly once combat becomes impractical. Golgari Charm is much more diverse; it protects your Legion or other critical role player, of course, but it also manages to squash one of Modern’s many problem enchantments and can eliminate a bunch of tokens or mana producers, too. Don’t worry, as your team will often be too tough to die from its effect.

As is the case for most Modern decks, lands are pretty tricky. Most everything in the list requires green, so I stuck to the Forests of Modern to draw additional colors. Otherwise, Cavern of Souls is a no-brainer, and City of Brass and Gemstone Mine can’t be beat for multicolored mana with minimal penalty. An original set of Mutavaults made the initial cut, but the colored mana was too precious to cast Sliver Legion on time; if you slimmed on the Coat of Arms Sliver, you could probably fit a whole set in with ease.

In my opinion, a creature deck’s sideboard is only as good as the relevant creatures that can tag in for maindeck creatures. Slivers have a deep line of useful creatures, but very few apply in a conditional setting. Harmonic Sliver is a nice fit though, providing repeated, clean artifact and enchantment removal. It’s a pretty nice tool against Blood Moon and Affinity decks. Syphon Sliver is also a great weapon against aggro decks; because the deck lacks much in the way of traditional removal, you need to find ways to get ahead in other ways. Mirror Entity, while only a Sliver in the strictest sense, acts as a nice mana sink, and it lets you concentrate the damage where you need it. It stacks with the boosts your Slivers already provide too.

Dismember is your standard removal; nothing to see there. Angel’s Grace, on the other hand, is an excellent combo breaker, Fog, or Time Walk for just W. It buys you the one turn you need to undo their plans. It can’t be countered, and you can be guaranteed another combat step. Sometimes that’s all you need.

The year’s nearly over, and we’ll be closing it out next week with a couple large decks if you know what I mean. Until then, I wish you and your family a happy holiday, and I hope you get a chance to enjoy a break from your daily routine for a bit of rest and relaxation!