I was fortunate enough to play in several Magic Invitationals before WotC decided to do away with them. These tournaments gave me a chance to travel to South Africa and pet baby cheetahs, play in exhibition matches on the floor of the E3 gaming convention, and battle from the computer lab in the heart of WotC headquarters. More importantly, though, they gave me the chance to compete for a truly coveted prize: the right to appear on my own Magic card.

I went on record back then stating that I would rather win the Invitational than a Pro Tour, and to this day I stand by that claim. Prize money is great, but years later that money will be gone, while your face on a card lasts forever. Just look at Dark Confidant. It’s been almost ten years since Bob Maher won the Invitational, and with how the game is grown, most players these days hadn’t even started playing Magic at that point. And yet almost any time anyone refers to Dark Confidant, they refer to it by its proper name: "Bob."

I actually lost to Bob in that tournament in hilariously absurd fashion. That was the year that the Invitational was held at E3 on Magic Online. We played in one of the Limited portions, and I had him down to two life with a Seismic Assault in play. When I drew my card for the turn, I thought I clicked on my Seismic Assault to throw a lethal land at his face, but when I clicked on my land in hand, it just went right into play. Bob drew a Drain Life, got out of range of my Assault, and then slowly whittled me down as I lost a game that would have been impossible not to win in real life. And you thought your misclick to lose your 8-4 was bad! Bob went on to win the tournament and become Dark Confidant, while I had to go into game design for any hope of seeing my own face on a card.

While the Magic Invitational may be dead, the dream of being immortalized as a card is still very much alive. When we were designing our organized play program for Ascension, we talked about what kind of cool unique prizes we could offer, and unsurprisingly the idea of an invitational-style card came up. We offered it as a prize for our inaugural World Championship at Gen Con in 2011, which was won by Aaron Sulla. Aaron’s victory came about through defeating Avatar of the Fallen and using its reward to also defeat Samael, the Fallen One, so it seemed all-too appropriate to immortalize him as a Hero who can be used to defeat similarly enormous monsters. 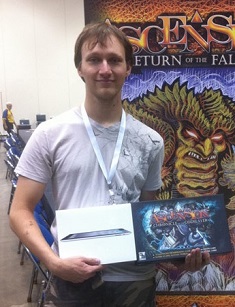 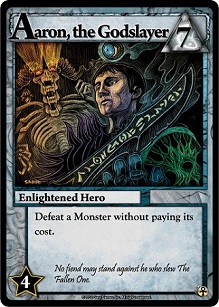 We offered the same prize once again for our World Championship last year, which was ultimately won by Jacob McCarthy in an incredibly close match. Jacob had relied on a heavy Lifebound strategy to gain lots of honor on his road to victory, so his heroic form became Jakeb, Cobra King, one of the new Transform cards coming out in our next set, Darkness Unleashed. 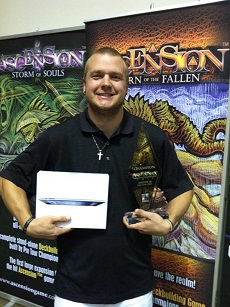 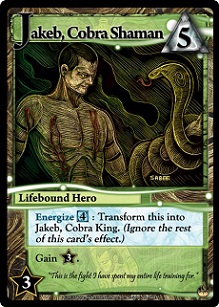 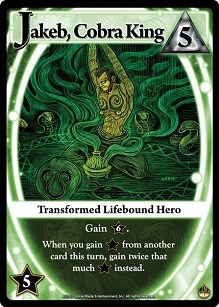 The excitement surrounding the cards awarded to the World Champions has been so high that we decided to expand the opportunities for our fans to become a part of the Ascension world. We’ve teamed up with StarCityGames.com to create a new tournament series: the Ascension Immortal Tournaments. An Ascension Immortal Tournament will be held at every StarCityGames.com Open Series weekend featuring an Invitational, giving players around the country a chance to be immortalized on an Ascension card.

Our very first Immortal Tournament was held at the last Invitational weekend in Atlanta. Reigning World Champion Jacob McCarthy made the thirteen-hour trek to Georgia for a chance to win the right to appear on another card. He did just that, pulling off an incredible second victory that cemented him as the player to beat in the Ascension tournament scene. He used his victory as an opportunity to make a card for his son, Miles, and that promo card will be given out to every competitor who plays in the next Immortal Tournament. 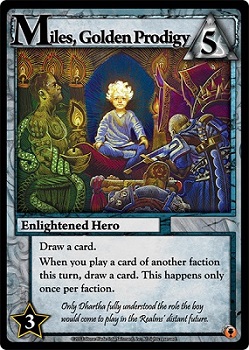 When is that next event? Coming up this weekend in Somerset, New Jersey! The Immortal Tournament will be held on Sunday, July 28th starting at noon. Every participant will receive a Miles, Golden Prodigy promo card, and prizes for the top finishers include exclusive playmats, honor bags, and Amazon gift cards in addition to the right to create your own card awarded to the champion.

If you aren’t an Ascension player already, you’ll also have a chance to learn the game at the event. As a deckbuilding game, it shares many similarities to Magic Draft in that you build your deck as you go from a constantly changing pool of cards. The game was designed by a group of former pro Magic players, including Pro Tour champions Justin Gary, Rob Dougherty, and myself, and our original goal was just to make a game that we would want to play—we had no idea it would take off like it did! For more information, head to ascensiongame.com.

So what are you waiting for? Don’t you want to be Immortal? Start planning your trip to the next StarCityGames.com Open Series featuring the Invitational today!