StarCityGames.com has lately been offering a bunch of new product lines and tokens on their website. One of these recent additions has been the Creature Collection illustrated by Liz Nugent. Various Magic-related paraphernalia are available for sale on SCG, and tokens with her art are offered with every order over $5. Right now, it’s Squirrels.

After seeing Liz’s new Squirrel token, I couldn’t resist spending some time with her and learning more about her process and her work with StarCityGames.com.

Liz, you’ve created some of the cutest tokens I’ve ever seen. What is your background as an artist?

I guess my background is being a cute machine! Really, I’ve been drawing since I was a little kid. I did go through several phases: anime, goth, more realistic concept art stuff… I knew I wanted to do this for my career, so I went to the Milwaukee Institute of Art and Design to study illustration. While I was there, I started investigating more of a cute/humorous illustration style, and that was finally the one that felt natural to me. I just like making people happy! So I focused on that, graduated in 2011, and I’ve been pursuing that style of work ever since!

Do you do illustration full time or as a side project?

I actually work full time at StarCityGames.com as a graphic designer and illustrator. Freelance illustration is fantastic and is my passion, but practicality (and student loans!) call for a steady paycheck.

What is the best part about working for StarCityGames.com?

My coworkers are just the coolest. We have such a blast making things for the Magic community, adorable products included! It’s just a really good culture there; it makes it fun to go to work.

Your tokens have become a great bonus feature for ordering from SCG. How did you start working with SCG?

On more or less a whim, I applied for a graphic design position there shortly after graduating. I wasn’t super into Magic at the time, but it seemed like a good opportunity and I thought the people there would be fun to work with. (And they are!) After working there a few months, the Penguin token idea was getting kicked around, and I pretty much pushed for a chance at it. They went for it, and you can see how that’s paid off! 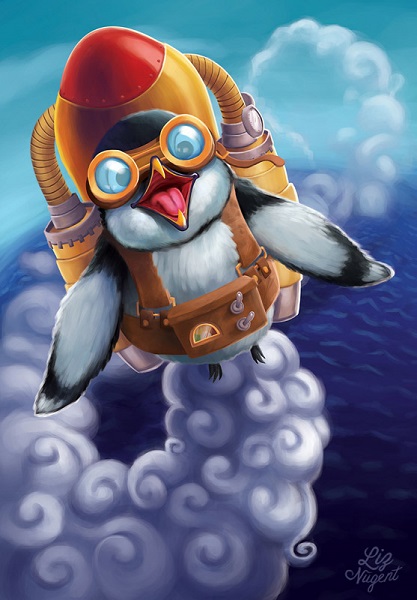 What is your creative process? For example, how did you create the latest Squirrel token?

The process is a little different for every project, but generally I get a prompt and do a bunch of rough sketches of different ideas and compositions. One really fun thing about the tokens in particular is that since my “client” is right in the office, we get to sit around spitballing ideas together. More fun than just plugging away by myself in my studio! We go through the thumbnails and pick the best one, and then I start painting.

I don’t actually tend to do very tight/detailed sketches before painting unless the client really needs to see one. I prefer to rough in shapes/colors and sort out the details of the composition from there. If I recall correctly, the Squirrel actually got flipped from my sketch, and the whole image got rearranged about one-fourth of the way through. I try to keep my process open to that kind of change. Some things look fine on paper and don’t feel right in the piece. 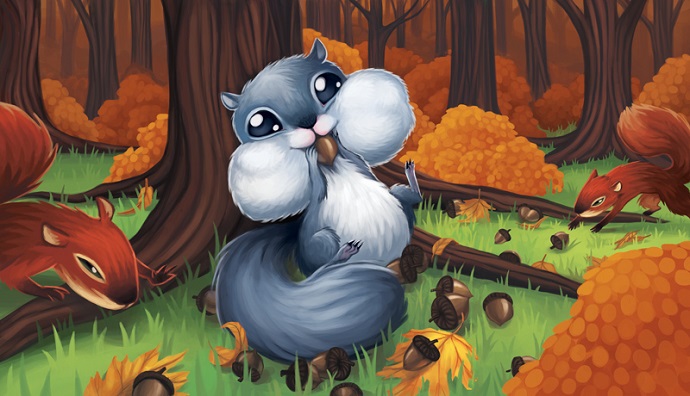 Do you work digitally? Have you ever worked in traditional media?

I worked almost exclusively digitally until about a few months ago when I started getting very excited about pen and ink drawings. And when I found out SCG wanted to send me to Grand Prix Charlotte, I learned how to use Copics so I could do playmats. So now I have those two skills in my arsenal, and I think they’re informing my digital work, which is great. I’ll always be most comfortable working digitally, but it is nice to get my hands dirty sometimes! 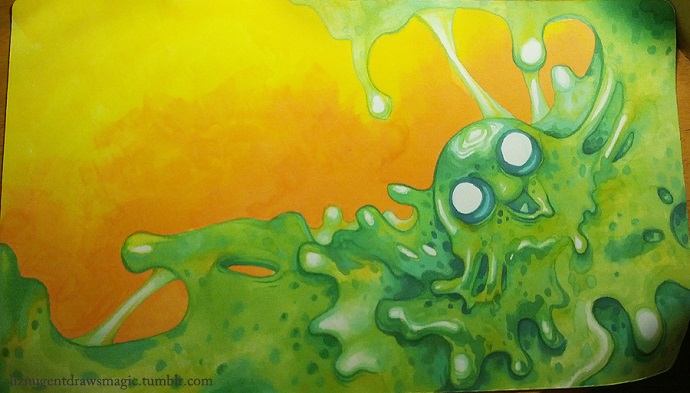 Have you had a chance to play with your tokens in a game of Magic? Would you consider yourself to be a fan of the game?

Haha, I sure have! I have a stack of Penguins I use sometimes, although typically I like to draw really stupid little tokens on the fly. It’s a little tradition we have in my EDH group now. So yes, I am a fan—I play EDH regularly and love it!

Who is your favorite EDH general? Do you play any other casual formats like Cube, Type 4, etc.?

I’m up to three EDH decks now: Karador, Ghost Chieftain; Thromok the Insatiable; and Wrexial, the Risen Deep. Wrexial is the newest and shiniest, but if I’m honest with myself, I think Karador will be my long-term favorite just because of his colors. And I love utilizing the graveyard; I feel powerless without some way to do that!

I haven’t tried Cube or any other casual formats yet. I love Planechase and Archenemy, though, if those count!

Do you have any stories involving your rocket-clad Penguins taking down opponents en masse? Any plans for doing the same with your newly released Squirrels?

I’ll get back to you on that after I draw up a “Squirrel Offensive” and a “Penguin Offensive” for my Thromok deck. (They certainly are…)

There is a continuing trend among Magic players to get their cards altered and personalized. Have you had any odd requests for alters done on your tokens yet?

Hmm…I did make a deathtouch Penguin, which was pretty goofy! I’ve only done the one event so far, so I haven’t gotten too many weird requests on that front yet. I’m sure there will be more.

If you could control the art direction and design for one card, what would the art look like and what would it do?

That’s a tough one. Is it too much to ask for a steampunky jetpack equipment that gives the equipped creature flying and intimidate?

As a relatively new illustrator, what has your experience been so far working in the industry? Has your work with StarCityGames.com inspired you to look into more projects involving gaming related illustration?

Although I’d done a few projects before the Creature Collection, this has just been on a completely different scale. It is really incredible to see stuff I made on display on this huge website and in the storefront and to have people (at Magic events) literally recognize me because of the artwork I’ve done. There just aren’t words. I see it as a confirmation that I’m on the right track and as motivation to keep getting better and find more avenues for my work. I’d love to do more game related illustration—my senior thesis was a children’s card game—but I’m also keen on anything in the children’s market or really anything that lets me draw silly cute things. 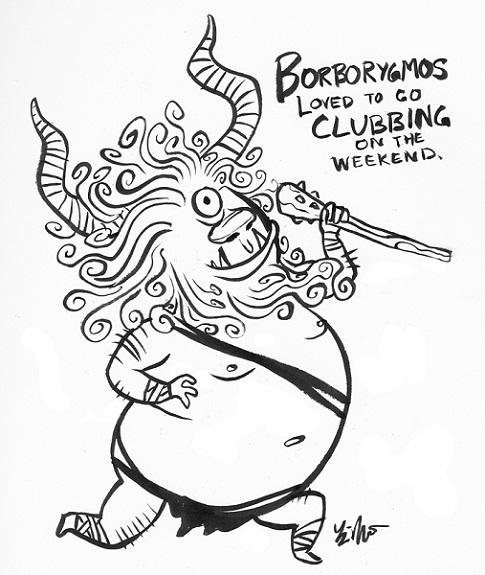 Do you draw inspiration from any other Magic artists when you are doing your illustrations? If so, who would you say has been the most inspirational?

Oh, absolutely! There are so many incredible Magic artists out there. I much admire the color palettes and exaggerated anatomy of Jim Murray, the beautiful abstraction of Veronique Meignaud, and the incredible mark making of Terese Nielsen. My biggest inspiration is definitely a personal one. John Matson was actually one of my professors in school, and I don’t think an illustration goes by that I don’t think of something he taught me or told me. So he would definitely have to be my biggest inspiration out of Magic artists.

Can you give us any hints for what you have in store for the next two tokens? Soldiers or Goblins, perhaps?

My lips are sealed! I don’t think anyone will predict what the last one is… That’s all I can say!

On your website, you have comic strips as well as other illustrations on display. Are there any other projects you want to show off to your fans—maybe a certain game involving Pirates? 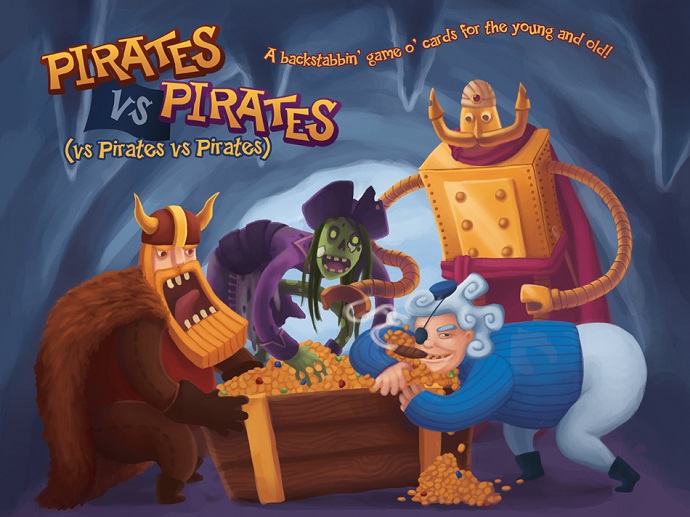 Aw man, I wish I had more to show or say about Pirates! Most of my personal projects have really been on the backburner since starting a full-time job. (I know, excuses excuses.) One thing that a lot of people don’t realize is that I do actually have a blog where I post a lot of Magic-related doodles and comics: liznugentdrawsmagic.tumblr.com.

Of course, I do a lot of non-Magic related art too, but the nature of this industry is that a lot of stuff has to be kept under wraps until release. So just keep your eyes open for my work, because I do have some really neat stuff coming down the pipeline!

If you enjoyed this interview, make sure to check out my other interviews at www.originalmagicart.com or follow me on Twitter @OriginalMtGArt.

My Case For Banning Thassa's Oracle In Historic

When a drawback is not severe enough, a card can end up ban-worthy. So why does Michael Majors want Tainted Pact to stay in Historic and Thassa's Oracle to go?

Did The May Strixhaven League Weekend Help Solve Strixhaven Standard?

What happened at the May Strixhaven League Weekend, and how will Standard players react? World Champion PVDDR and others say what they'd play.

Prepare For Sanctum Prelate's Arrival In Modern Or Else

Sanctum Prelate will transform the Modern metagame as part of Modern Horizons 2. Ari Lax breaks down why it matters, the losers, and the winners.

The Politics Of Commander

VS Live! Modern As We Know It

With Modern Horizons 2 approaching, Corey Baumeister and Ross Merriam survey the state of the format in three epic battles.

Everything I Know About Boros Winota In Strixhaven Standard

Boros Winota is the World Champion's pick for the best aggro deck in Strixhaven Standard. He shares his latest list and sideboarding guide.

Dominaria's Judgment: What To Expect From Modern Horizons 2

Dom Harvey and Ari Lax review the recently previewed cards from Modern Horizons 2 and discuss what they want and don't want most, based on the original set.

Everything I Know About Naya Adventures In Strixhaven Standard

Seeking a Strixhaven Standard deck for the weekend? Brad Nelson is here to send you on Naya Adventures... maybe with something extra thrown in.
View More