Amonkhet is in and Kaladesh and Aether Revolt are out. We’ve been crafting with artifacts and Vehicles for the last few months, and while there are bubbles of movement amongst the best decks in the format, most players I’ve interacted with agree that these newest sets are a bit passé by now. Whether it’s the exhaustion of facing 40 copies of Heart of Kiran in ten rounds of Standard, getting beaten down with millions of artifact creature copies of Felidar Guardian, suffering death by a thousand stings via Walking Ballista, suffering death by a thousand triggers via Aetherflux Reservoir, or cracking Renegade Maps and other “free” artifacts for value for the millionth time, it’s very possible that artifacts themselves are to blame. 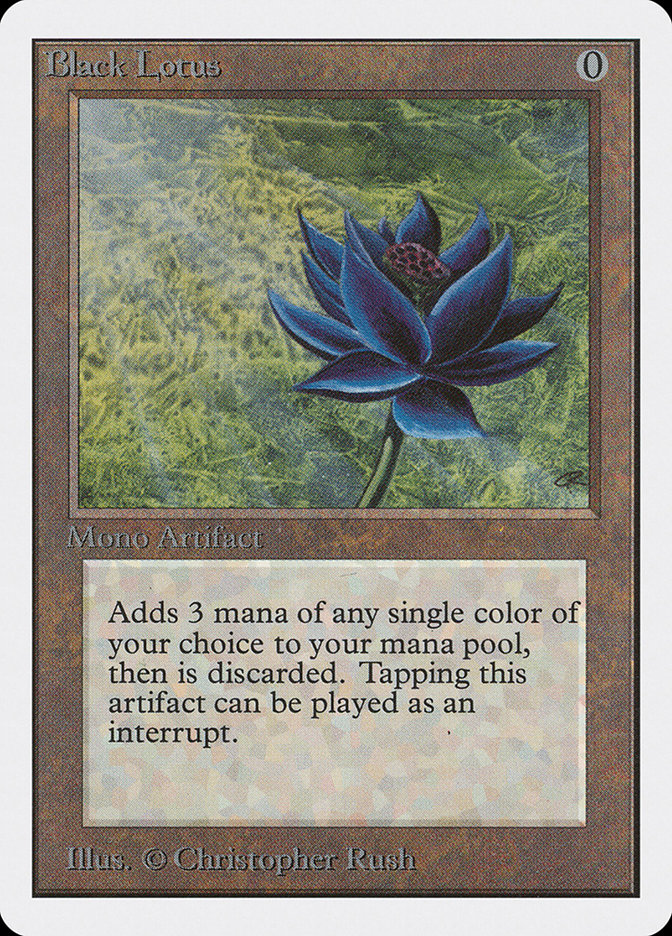 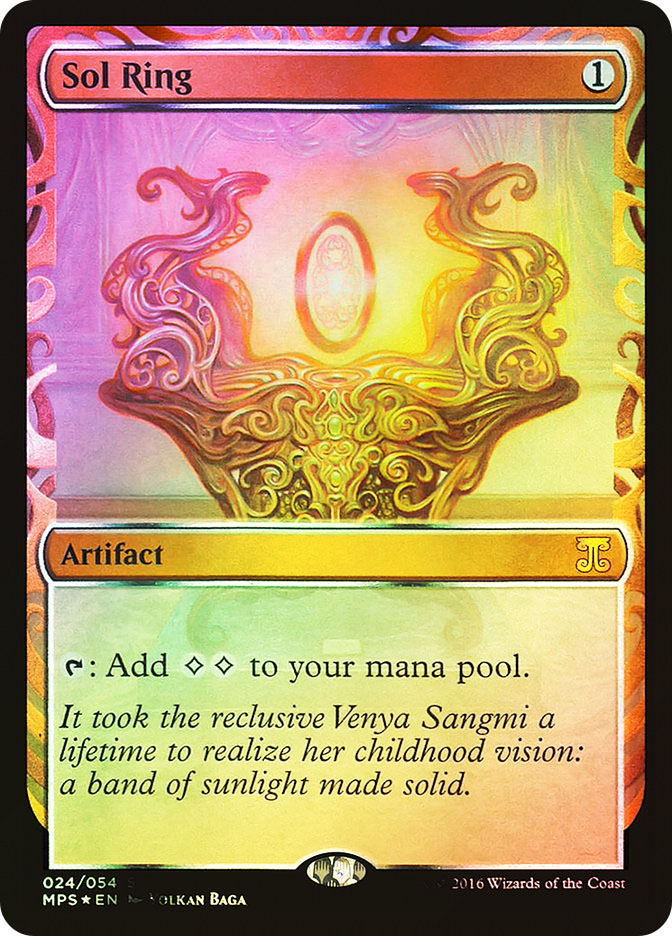 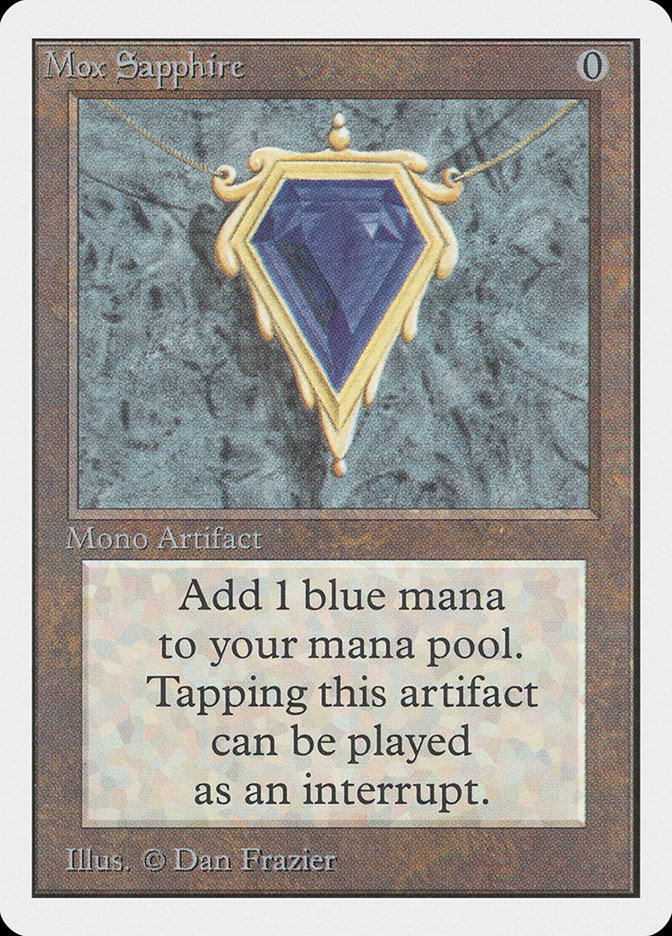 It has always been the artifacts’ fault.

Artifacts are tricky. On one hand, they provide flexibility for a color, allowing one color to do something it normally can’t, though usually at the cost of efficiency (green gets Explosive Apparatus, red gets Universal Solvent). On the other, good artifacts become ubiquitous, meaning that decks quickly become homogenous. That’s what made Smuggler’s Copter so toxic to the format; it was a creature with an excellent rate and evasion, and it gave any color card selection, instead of the typically red and blue identity of looting. Most of my own brews over the last few years have relied on good artifacts, and some have relied on artifacts for artifacts’ sake.

I love artifacts, but there is a limit, and, as with any mechanic, it can get old. Amonkhet takes us away from the artifact focus to concentrate on the graveyard, another design space I love. So, before the sand blows in to buffet the artifacts to which we’ve grown accustomed, let’s abandon our metallic ways. The cleansing winds are coming, so let’s take a step into a couple of decks I’ve been looking at that dodge artifact use entirely.

This is a bit harder than you think. Unless I missed one, all of the Top 8 decks at the previous GPs in Brazil and Shizuoka include at least a few artifacts, either as role-players or as central functions to the deck. Delirium decks, Vehicles decks, Dynavolt Tower decks, and Four-Color Saheeli all feature something that needs an artifact. With the exception of just slashing the artifacts, we’re going to have to rebuild the deck from the ground up.

My first “natural” deck came to mind as an aggro deck. Like, an old-school aggro deck. Artifact decks generally lend themselves to getting tricky, but after being sneaky for the last few months, I wanted to just get sideways with as many creatures as possible and beat my opponent down. Don’t let anyone talk you out of an aggro deck; there’s something truly cathartic about slamming into your opponent’s face at full speed.

The most common “natural” deck I’ve seen involves the use of energy, featuring great cards like Voltaic Brawler and Longtusk Cub. This is a known deck, and although it’s a legitimate path, I want to take a different way, mainly be using a mechanic that saw some time several months ago: Humans. 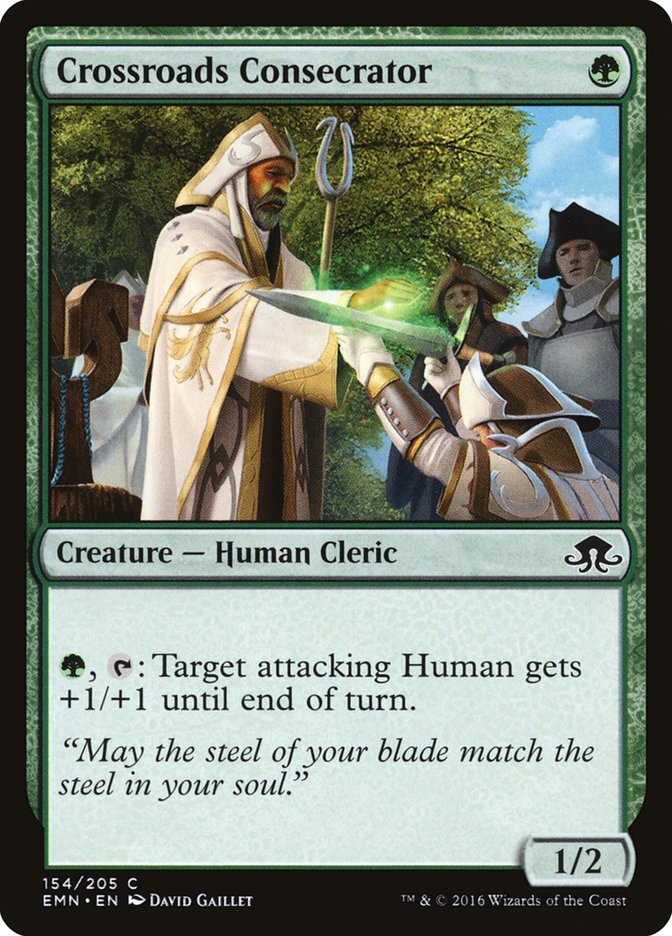 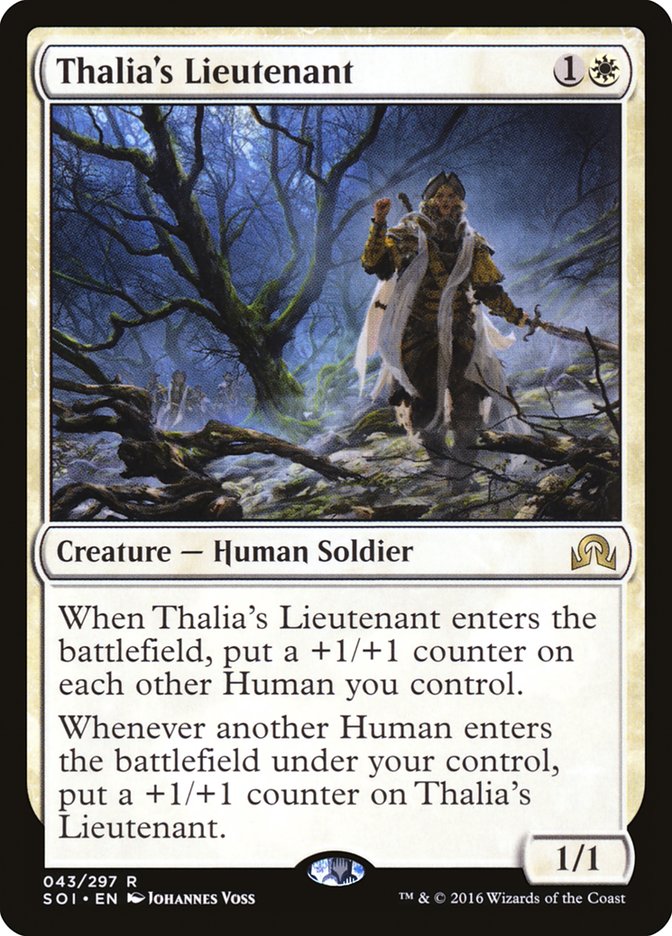 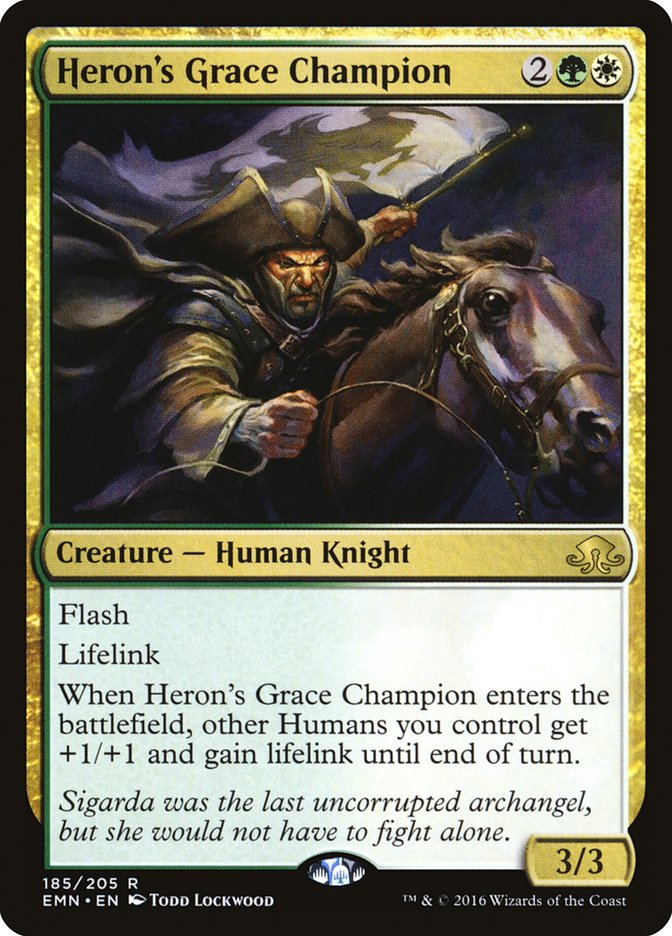 Humans haven’t been the same since we had a flurry of 2/1 one-drops for a single white mana. That level of consistency was terrifying for an unprepared deck. While we don’t have that level of speed, we do have that level of width, spreading creatures across the length of the battlefield. With today’s lack of effective sweepers and control decks, do decks like this have a chance in the metagame beyond just a whimsical distraction?

While the previous deck featured lots of one-drops, we can upgrade to slightly stronger two-drops this time around. Three-drops are rare, and all of them are attempts at two-for-ones.

Splitting into two colors is rough, but having Fortified Village is a huge boon, and it requires that you build your deck with a supportive manabase. Thraben Inspector (which, yes, I guess does make an artifact) is well-known, but the other one-drops never see play. I very much wish Crossroads Consecrator tapped for free like Infantry Veteran of years gone by, but this still lets you bluff it and then use the green mana in the second main phase. Thraben Standard Bearer is both a Human and a “spellshaper;” see Icatian Crier. Making Humans out of anything you draw is a way to stay relevant and, while not the most groundbreaking card, makes sure that you’re drawing live as long it’s alive.

This is particularly relevant for Thalia’s Lieutenant, which both pumps the tokens and gets pumped with each token created. Hamlet Captain is a classic Human creature from all the way back in Innistrad. I like that it increases blocking power, too, so that it’s immediately relevant if you’re behind.

Above two mana, Renegade Rallier can get anything below itself. It’s a Human, too, which means it has neat interactions; bring back Thalia’s Lieutenant or an Oath of Ajani, which gives the new Rallier a +1/+1 counter. Heron’s Grace Champion is the coup de grace, if you’ll permit me. Because our creatures are going to be larger anyway, less is needed to go right before Heron’s Grace Champion is a solid play. 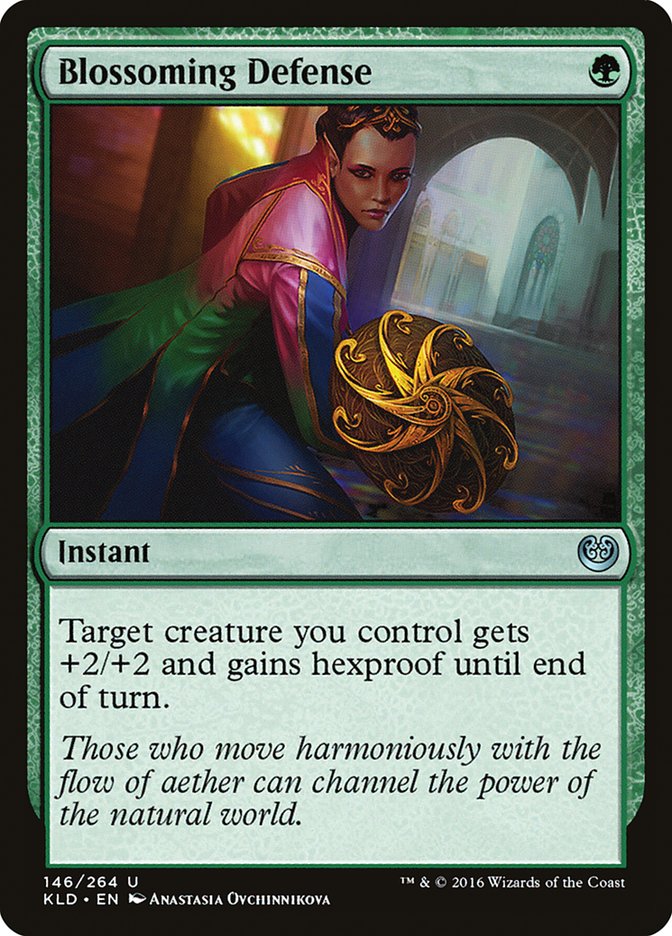 Anyone who’s played against Infect in Modern or Legacy knows what lies behind an untapped Forest: Vines of Vastwood. This seemingly innocuous green instant has confounded both proactive and reactive plans, and while Blossoming Defense can’t target their creatures to counter your opponent’s targeted spells, it sure does shut down Unlicensed Disintegration and Fatal Push, some of the most popular removal spells in the format. It’s a simple +2/+2 when you need it, but it can create uncomfortable trade potential for your opponent, or it can be used purely reactively. Either way, you’ll perfectly preserve your battlefield state. 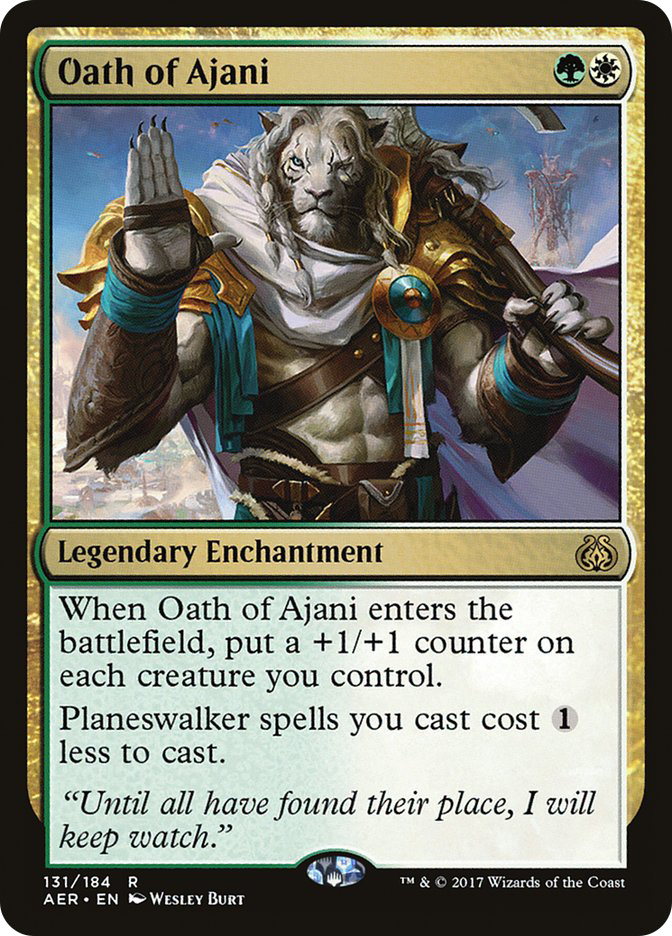 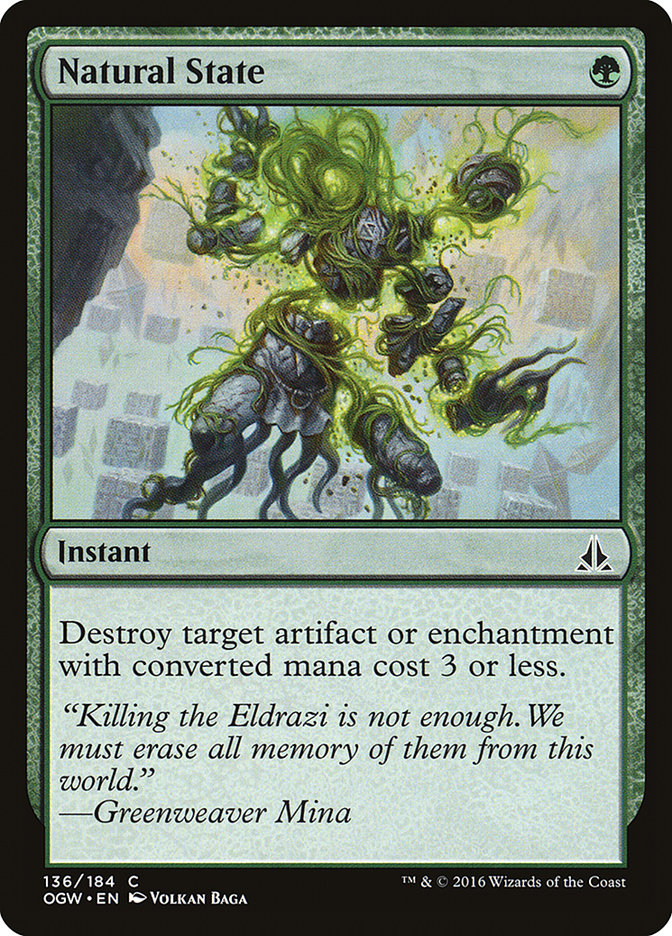 These nine spells are here to buff up the team. We don’t have many two-power creatures, so we have to improvise. Still, these efficient Anthem effects work great in multiples, and Oath of Ajani directly supports a playset of Gideon, Ally of Zendikar. Have you ever played a turn 3 Gideon and lost? I found through testing that Always Watching was nice, but multiples got worse, and it was often at the top of the curve for a given game. There are some nice synergies, though, including attacking with Crossroads Consecrator and pumping itself.

Again, the manabase relies on a large quantity of basic lands or cards with basic land types. This is as effective a mix I’ve found through some repeated transfer.

This deck was intense, and it relied heavily on the opener. After having some level of flexibility with my previous decks, I had to retrain my mind to more critically analyze my opening seven. You won’t likely have a winning game that lasts long enough for you to draw another hand’s worth of cards, so it’s important that the deck is built with those first seven in mind. Still, the deck was fairly exciting and not nearly as linear as I feared. Thraben Standard Bearer was actually quite a nice asset for those grindier games where my opponent stabilized at six or seven life. I think we can do better, though, playing on the idea of velocity and power.

Winding Constrictor has been the lynchpin aggro decks have needed to remain relevant in a format full of haymakers. The increased rate on otherwise decent creatures is often good enough to base a deck around, and here, I want to look at a couple cards alongside this +1/+1 counter boost that haven’t been explored yet. 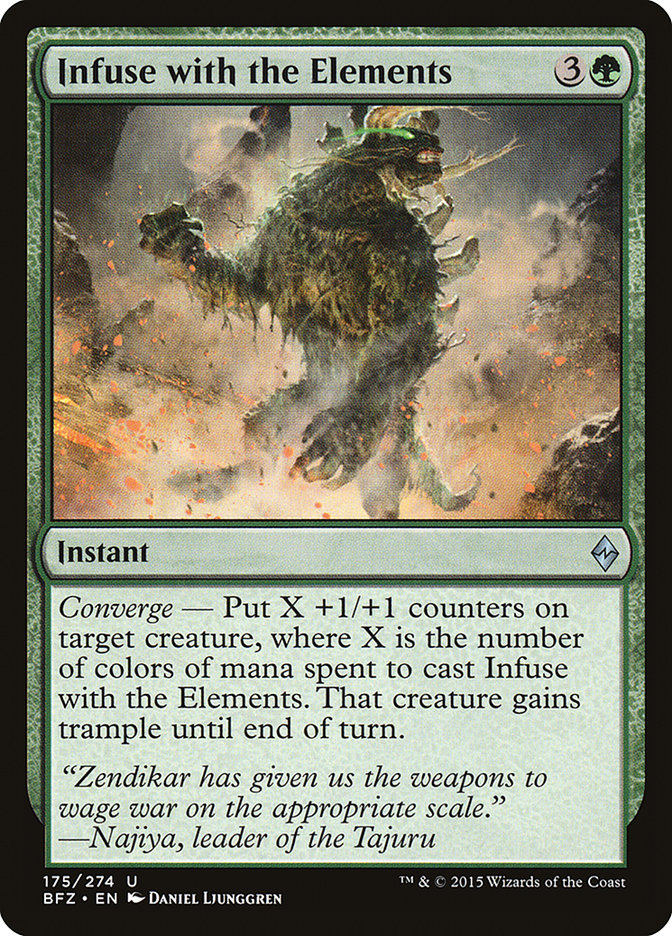 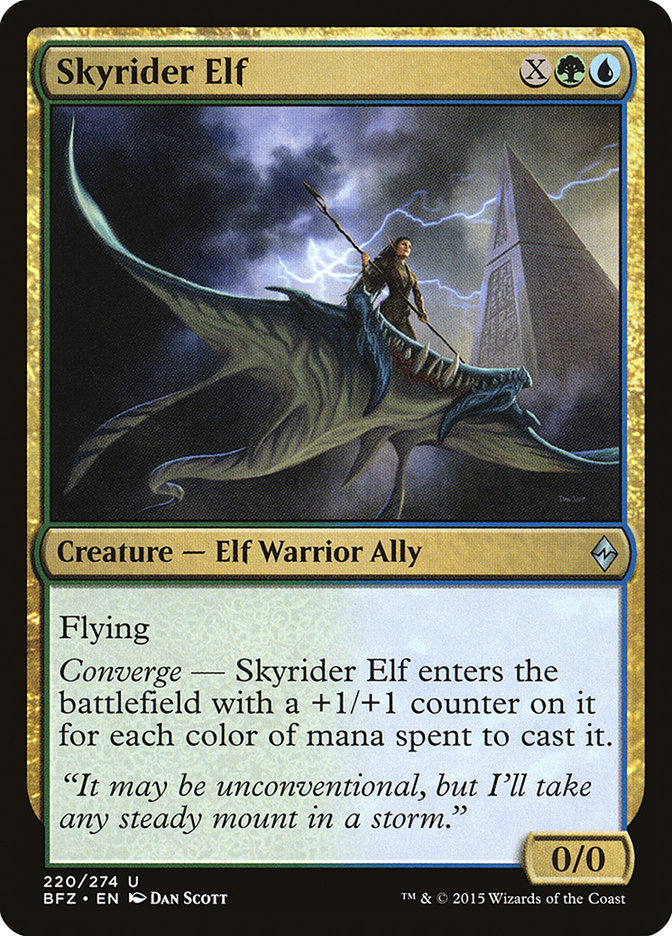 Skyrider Elf has been on the edge of vanilla playability, confounded by the presence of more broadly powerful cards. Making a nonchalant 4/4 flyer on turn 3 is enticing, and if I’m just about big, meaty creatures today, we’re headed in the right direction. This deck may not go as wide, but we want every creature to be a threat.

Infuse with the Elements is expensive, but it can be an incredibly powerful pump spell when you’re hitting them hard enough to bleed them of removal.

Working together, I think we can make a fun Sultai plan.

Unlike the previous deck, here our wide plan is more about making big, clock-making creatures. This deck features eleven creatures that directly or indirectly produce mana, both to help keep converge as big as possible and to fuel our most expensive threats, perhaps two and three at a time. Beastcaller Savant may not be impressive, but it does make every color, and its haste isn’t just relevant for itself. A huge Altered Ego can copy it, gain haste, and have all the +1/+1 counters to be relevant in combat. Bristling Hydra is notoriously difficult to kill, and with enough energy, you can power it up pretty well without spending mana, which leaves you free to shove in an Infuse with the Elements. Not many ways to stop a huge trample hexproof attacker. 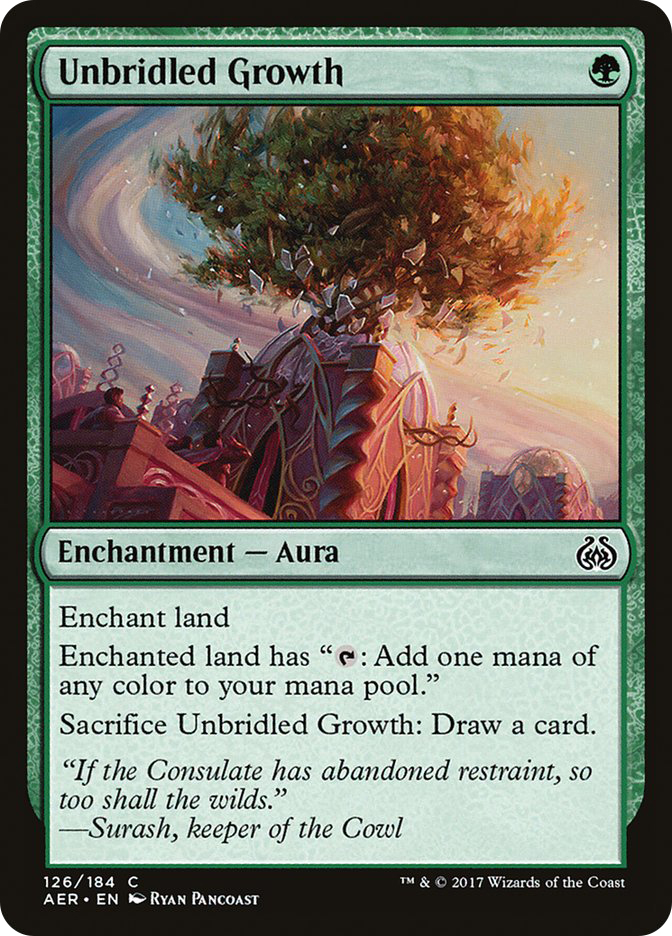 Unbridled Growth was made to go in this deck. Almost every land can cast it, and the free, on-demand sacrifice can line up perfectly with Fatal Push or as a way to cycle through the deck. Green doesn’t have many one-mana cantrips, so whether you need the fix, the revolt trigger, or the new card, this is the nuts-and-bolts kind of card that makes the deck run.

Out of the sideboard, I’ll mention Roilmage’s Trick as an on-theme way to handle a Felidar Guardian combo stopper. Sure, attack me with infinite -3/4s. I’ll draw my card after you burn everything you’ve got to kill me. Fog!

This deck was a bit more explosive, and the Bristling Hydra / Infuse with the Elements one-two punch was surprisingly effective. The deck occasionally stalled on energy, but when it curved out, it was often able to put up a good presence, even through removal and attacks.

As of the writing of this article, only a few, mostly low-profile Amonkhet cards have been spoiled. However, next week, we should have enough to get a bit deeper into the new set, which should be full of flavor and synergy. I can’t wait!