Oh, who am I kidding; it’s preview time for Aether Revolt!

Even if a format isn’t going your way or you feel like the decks in Standard just aren’t jiving with you, there’s always a new set just around the corner to throw things for a loop. Aether Revolt looks to follow up on Kaladesh with a new bevy of Vehicles, planeswalkers, and artifact-themed cards for us to enjoy. 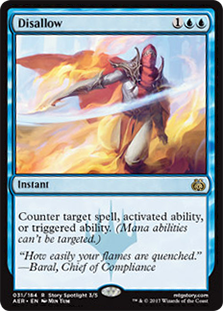 To a normal Magic player, a card like Disallow might not look that exciting. Essentially just an updated Voidslime, in most scenarios Disallow will be nothing more than the much-maligned, often-reprinted Cancel.

I’m not a normal Magic player, and I’ve cast Cancel more times than I’d like to admit in Constructed. Hell, I’ve won a PTQ with four copies of Cancel in my deck! Sure, it was Time Spiral Block Constructed, but that’s a lot of copies of Cancel!

I’ve been playing Cancel variants for years and will likely continue to do so until Wizards of the Coast decides to reprint Counterspell. If they can reprint Lightning Bolt twice, we can have Counterspell for a little while, right?

So three-mana unconditional counterspells are where it’s it, and Disallow is a very good one. Most of the time it is just going to be a Cancel, but most of the time, all the above listed cards are also just Cancel, and that’s okay. Magic has shifted to be very midrange in the last few years, and when many of the best cards cost four and five mana, all of a sudden Cancel isn’t an awful place to be.

But while counterspells are very good against the midrange threats that commonly populate a Standard tournament, counterspell decks tend to be rather weak against planeswalkers.

The list goes on and on, but the basic idea is that control decks often have trouble removing a planeswalker before its ultimate is able to go over and win the game. Even the planeswalkers like Liliana, the Last Hope or Ashiok, Nightmare Weaver, whose plus abilities don’t really do much, are threats as they ultimate quickly enough to be a major issue.

Now our Cancel can also double as insurance against planeswalker ultimates.

Considering that Cancel-type cards were already playable in control decks, this is the kind of extra utility that really adds power to a deck. There are of course a million other abilities that can be countered and be great, from things like Selfless Spirit all the way up to Westvale Abby, and while most of the time you aren’t going to want to use an entire card on countering an ability, having the option to is fantastic.

I love this card! 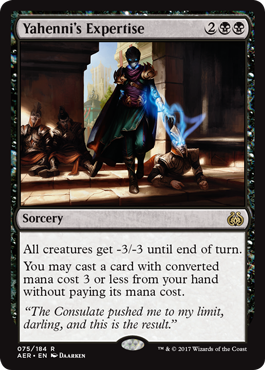 Hmm… looks like they stapled Languish and Bloodbraid Elf together.

Yahenni’s Expertise has a lot of unpack. Sweepers are great and free spells are also great, but how’s the whole package look?

Interestingly enough, I don’t think we’ve ever had a global -3/-3 effect before. There have been a ton of Infest variants, but three is certainly a lot more than two. As we saw with Languish, global –X/-X effects are good, but certainly not as good as a pure Day of Judgment effect. Killing everything without question is one of the safest feelings in Magic, and the feeling has not been common lately. You can certainly size your creatures in a manner where you can play both creatures and Yahenni’s Expertise, but that makes it more of a utility spell than a pure sweeper.

Not only is -3/-3 not always enough to kill many of the format’s threats, but sweepers also face a much larger issue in the current Standard format:

Standard is full of a variety of noncreature threats. Aggressive decks can easily diversify their threats across a variety of permanents like planeswalkers and Vehicles, which greatly reduces the value of a four-mana sweeper. If you are going to kill all your opponent’s creatures only to take five damage the following turn from Gideon, you’re going to have a bad time. This is the reason why Fumigate, one of the best five-mana Day of Judgment effects ever printed, sees very little play.

So as a sweeper, Yahenni’s Expertise is certainly underpowered. However, it has a second line of text:

“You may cast a card with converted mana cost 3 or less from your hand without paying its mana cost.”

Reading these words will instantly evoke memories of Bloodbraid Elf and Collected Company from some players, and with just cause. Both of those cards completely dominated the formats they were legal in for a long time.

There’s a major difference though— the card you cast must come from your hand. While Bloodbraid Elf and Collected Company were both tempo and card advantage cards, Yahenni’s Expertise does not actually provide you with the card to cast. This means it is purely a tempo tool, and there are going to be times you have no relevant cards in your hand to cast. This poses a similar deckbuilding restriction to Bloodbraid Elf – “play a large number of impactful and proactive three-mana spells” – without as much of the payoff. Yahenni’s Expertise does not play well with counterspells and really wants you to follow up with things like Liliana, the Last Hope or Ruinous Path.

Yahenni’s Expertise is a good Magic card, but it’s easy to look at it and see things that aren’t quite there. It is a card that requires some work, and also a card whose power level is going to vary wildly with where the Standard format is. 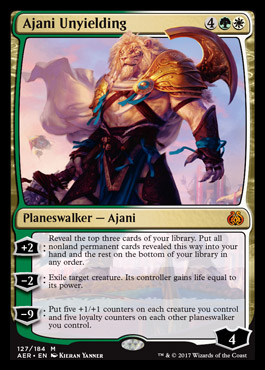 It really feels like planeswalker design is getting lazy. Jace, Unraveler of Secrets is essentially just a blue Ob Nixilis Reignited, and Ajani Unyielding feels like a G/W version of Sorin, Grim Nemesis.

+X – Draw some amount of cards in some way that is relative to the cost and loyalty of this planeswalker.

–X – Kill a creature in some way that is relative to the cost and loyalty of this planeswalker.

Ultimate – Do something that will likely win the game around 80% of the time on the spot.

I understand that there have now been a ton of planeswalkers printed since their inception, but the overall allure is starting to wear off. Yes, there have been some interesting exceptions, like Tamiyo, Field Researcher and Chandra, Flamecaller, but for the most part they have followed this formula.

Regardless, Ajani Unyielding is here and ready to make his mark in Standard.

Emrakul, the Promised End is the end-game of Standard, and she is the end of any attempt at a full-on midrange-style deck in Standard. As long as she exists to go over the top of everything, cards like Ajani Unyielding and Sorin, Grim Nemesis just aren’t worth the mana cost.

Ajani Unyielding is never going to be a format staple, but it is certainly a very playable one- or two-of in midrange decks that will want that sort of effect.

We can expect Aether Revolt to bolster the themes presented in Kaladesh with new artifacts, Vehicles, and energy producers.

I only hope that the energy producers don’t further power up the current crop of Aetherworks Marvel decks, which are already exceedingly powerful and frustrating to play against. The G/R Aetherworks deck’s ability to meld the energy and delirium themes is as impressive as it is difficult to beat.

Let’s be real, though. While I’m concerned about more good energy cards and examining how the new cards are going to affect Standard and other formats, what I’m really looking for is just sweet cards to cast off Torrential Gearhulk.

Despite Emrakul, the Promised End, despite Gideon, Ally of Zendikar, I just wanna cast some Torrential Gearhulks!