The Season Three Invitational has come and gone, but not without Tom “the Boss” Ross making his mark once again by pulling off historic back to back wins.
This is truly an amazing feat, and I am very happy to see my fellow writer stick true to his blood by taking it down with two decks he knows in and out.
For myself, the Invitational went “okay,” but I’m not satisfied with my 17th place finish.

I decided to play a deck I knew very well in the Legacy portion in Shardless BUG. Shardless BUG is a deck I have played for a little over a month now and
am very comfortable with it against much of the field. Between the hand disruption, counters, card advantage, and board control, Shardless BUG plays right
into the style of deck that I enjoy playing (which is something very important to me). I’m not saying you have to play one deck and stick with it, but
getting as much experience as you can with a particular archetype is very important. Even if the exact 75 cards change from weekend to weekend, the
strategy behind the archetype will most likely not, which should give you an edge. Take Tom Ross once again for example. His Standard deck from the Season
Two Invitational compared to his Standard from the Season Three Invitational were somewhat different but familiar to him. New cards came into Standard and
the metagame slightly shifted, but the strategy and the role Tom took on as the aggressor stayed the same and proved to be very successful.

Besides my comfort with Shardless BUG, I felt it would be a good choice for the metagame as I was expecting a good amount of Delver and Deathblade type
decks. My final record with the deck was 6-1-1 (with 2 byes, so 4-1-1) which is pretty good. My draw came against Miracles which in my opinion is a very
close matchup. You have a fair amount of hand disruption and counters, but they have a great long game with the threat of drawing an Entreat the Angels and
closing things out very quickly. Another factor you must consider is the threat of Blood Moon which is strongly making me reconsider my manabase. Most
Shardless BUG decks run anywhere from zero-to-one basic lands, but I’m going to try running one of each basic and see how that works. I think when going
into a big Legacy tournament, it is important to give yourself the best chance against a wide range of decks rather than showing up with the best build of
a deck. That might sound slightly confusing, but all I’m really saying is that it’s important to hedge your bets. Having three basic lands in the deck will
definitely draw some consistency and power from the deck, but I believe that not automatically losing to Blood Moon outweighs the drawback. My wins came
against the mirror, Burn, Miracles, and RUG Delver.

My one loss came against Elves in a very close three-game match. In the final game I drew my opening had and on the draw I saw these seven cards starting
back at me:

What would you do? Keep? Or ship it back?

I know I have a reputation of keeping pretty much any opening hand, but I have been really working on my mulligan decisions. If we break down the hand,
it’s clear that we have too many lands, but it is also clear that we have two of our best cards in the matchup in Thoughtseize and Umezawa’s Jitte. Since I
was on the draw, I had one extra draw step at finding a Deathrite Shaman which would be the ideal play since it sets up a turn 2 Jitte + Thoughtseize.
Other good draws include another Thoughtseize, Brainstorm, or something to control the board like Golgari Charm or Abrupt Decay. Since I had Jitte in hand,
I would need to find a creature and considering Shardless BUG has so many of them, that shouldn’t be a problem.

I ended up keeping and my opponent led off with a Bayou and Deathrite Shaman. I drew my card for my turn (another land) and led off with Thoughtseize. This
was the hand I saw:

This is actually a pretty good hand for me to see, since taking the Green Sun’s Zenith left my opponent with very little action. I ended up drawing and
playing a Shardless Agent (casting into an Abrupt Decay) a few turns later after hitting his Dryad Arbor with a Wasteland, but he ended up drawing a
Natural Order, searched up a Worldspine Wurm and that was that. Afterwards I went up to many of my friends to get their opinion on the hand, but now I want
to hear what you guys have to say so let me know what you would do.

After that round I ended up beating the mirror match and headed into Standard with a 3-1 record. I decided to switch things up, and instead of playing
Esper, I went with Mono-Black Devotion splashing Blue for a few sideboard cards (and of course my favorite planeswalker, Ashiok, Nightmare Weaver). I
figured the metagame would contain a good amount of aggressive red decks, U/W Control, and other Black Devotion decks. My thought process was that Lifebane
Zombie wouldn’t be all that great and Ashiok would play a much better role. Thankfully I was correct and got the matchups I wanted but only managed a 2-2
record leaving me at the end of day 1 in 105th place with a 5-3 record overall. I was disappointed, as I felt that I played well and was very prepared, but
I accepted the fact that I needed to step up my game and go 7-0-1 to make top 8.

The next day started out great and before I knew it, I was sitting in 11th place with a 10-3-1 record. I managed to go on a 5-0-1 run and was in the
feature match area against Jund Monsters. I needed this win and one other for top 8 but ending up falling short and had to settle for a 17th place finish.
All and all the weekend was a blast, and I was super happy to see my good friend Reid Duke finish in seconnd and earn himself a spot in the Players’
Championship. Also, I wanted to extend a huge congrats to Ross Merriam for his second place finish in the Legacy Open, proving once again knowing your deck
in and out provides a huge edge especially in large formats.

So now that the Invitational is over, its time to take a break until Khans of Tarkir comes out right?

I’ve been brewing something super sweet that I want to share with you guys. But before I get to the decklist, let me explain a few of my thoughts. Once the
rotation happens, players will be brewing like crazy and many decks will be untested to the fullest, which means the format as a whole will slow down, and
the more powerful strategies will dominate early on. Because of this I think the best gameplan for the Dual Open Series weekend in New Jersey and
Indianapolis should be to show up with something powerful.

This is still a work in progress, as numbers will change as new cards get spoiled, but the base of the deck is there, and this list is the real deal. You
see a good amount of cards that have proven themselves in graveyard type decks before, but there are also a good amount of Khans of Tarkir cards that make
a huge impact on the archetype such as See the Unwritten and Necropolis Fiend.

Did I mention the fact that Rest in Peace, Syncopate, and Scavenging Ooze are rotating out? This means as of now this deck is pretty clear from hate and
even if someone wants to show up, with a Tormod’s Crypt, you can just slam a See the Unwritten and bust out a turn 4 Ashen Rider.

There are also a good amount of small synergies you might not pick up on at first glance (or maybe you have but either way I’ll make it clear). First
things first: 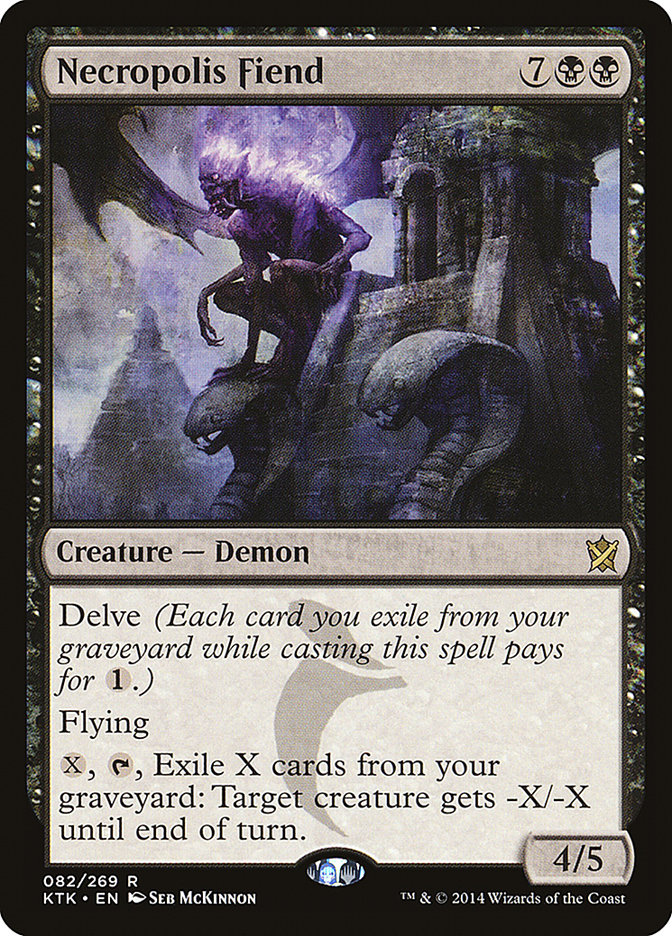 This thing has Delve!

Necropolis Fiend having delve means that the faster you fill up your graveyard and the bigger you make it, the cheaper Necropolis Fiend will cost and the
more powerful it will become while shooting down creatures. Another interaction is the fact you are likely to turn on ferocious quite often considering you
have Nighthowler and Nissa, Worldwaker to get things started.

Nissa, along with your six mana accelerants, will also help you hard cast Ashen Rider if you happen to draw it. Even though you only have six Forests to
work with Nissa’s untap abiity, you now get four copies of Windswept Heath to increase that number to ten without actually having to play ten forests in
this three-color deck.

Another small thing to consider is that you can now use your temples more freely since you’re able to shuffle your deck with the fetchlands in case you put
a key spell on the bottom of your library. With this deck, you tear through your library, which makes Whip of Erebos really shine, so I decided I wanted
three copies even though you often find one pretty easily with Commune with the Gods.

Speaking of gods, there are two copies of Pharika which allows another way for you to abuse all the extra cards that are going to the graveyard. You don’t
really want to Whip back an Elvish Mystic, but you wouldn’t mind eating it to a Pharika and spitting out a 1/1 with deathtouch. Remember: Pharika is a
creature when it is in your library so are able to choose it with See the Unwritten if that comes up as well. Pharika is also fairly easy to turn on with
this deck so don’t be surprised if you find yourself bashing in for five every now and again with the God of Affliction. Lastly, if delve ends up being a
powerful mechanic in Standard, Pharika has the added bonus of being a maindeck hate card against other graveyard strategies.

Overall, I’m very happy with the current build and how it is shaping up. The sideboard is a bit rough now so I would love to hear your ideas on what you
think are the important cards to sideboard once the rotation happens. Other cards I considered were:

The options you have are many, and once the complete spoiler is out, everyone will have a better feel for the metagame. Making a sideboard will be much
easier.

So there you have it! The Season Three Invitational didn’t go exactly how I wanted it to, but I definitely learned a few things to improve my game and
deckbuilding skills. I’m sure I’m not the only one to start putting work in on a deck like this so feel free to share your lists, and let me know if you’d
keep that hand!