If you were paying close attention to Wizards’ design process lately, the return of fetchlands shouldn’t be terribly surprising. I’d actually been
anticipating it for quite some time and realized this summer that Khans of Tarkir would be where they made their return. There were two major clues: Modern
Masters and M15.

The existence of Modern Masters demonstrates WotC’s clear commitment to making that format more accessible. Reprinting staples like Tarmogoyf, Dark
Confidant, and Cryptic Command helped dramatically increase their supply, which led to events like Grand Prix Richmond drawing over four thousand players
for what was once considered an inaccessible format.

The biggest barrier keeping most players from getting into Modern at this point is the price of fetchlands. While the Zendikar fetchlands are only five
years old, Magic has grown enormously since then, and the demand for them for both Modern and Legacy is enormous. As Modern has grown in popularity, the
price of fetchlands has skyrocketed, with Scalding Tarns peaking at nearly one hundred dollars apiece. Clearly something had to give.

That’s where the second hint came in: M15. The enemy color painlands in the Core Set were a clear sign of an allied color cycle to come soon after, because
it has become WotC’s general policy to offer comparable mana fixing to each two color pairing. It certainly didn’t make any sense to print the existing
allied color painlands in Khans, since they have names evocative of different planes than the one in which the new block takes place. What other allied
color lands make sense then? Why, ones with generic location names that WotC has motivation to reprint now. 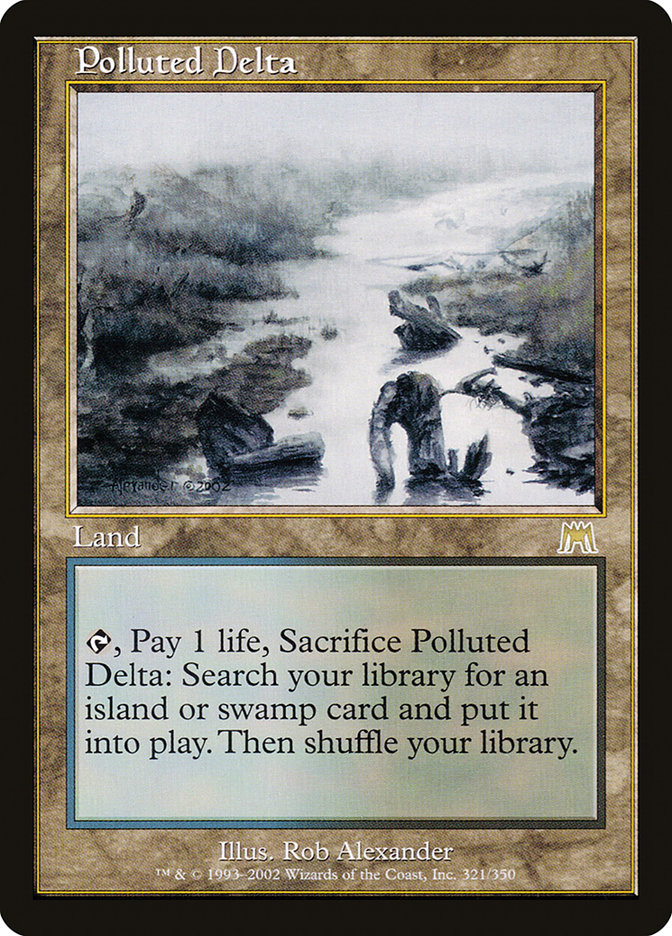 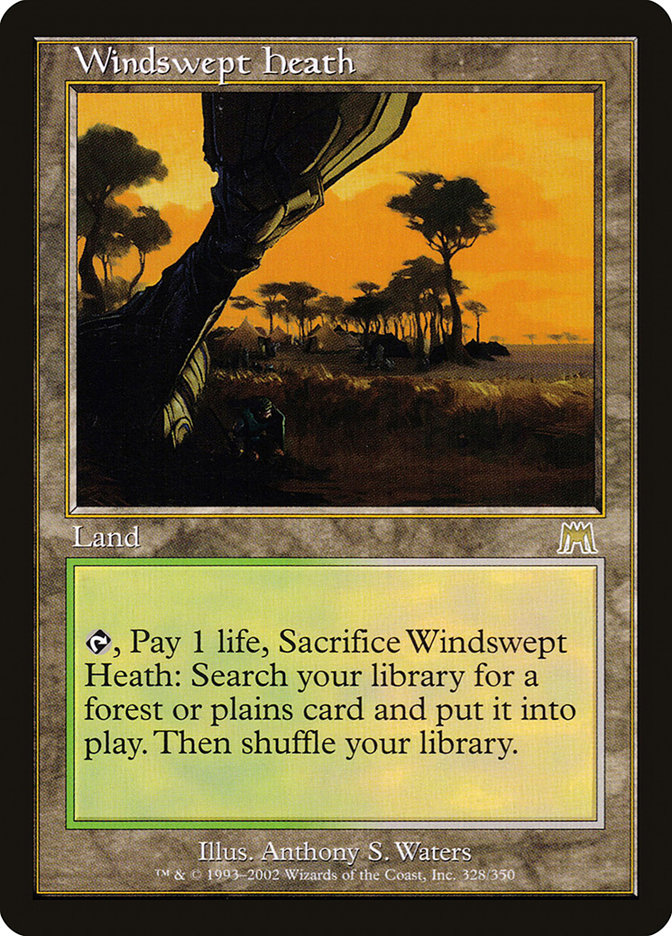 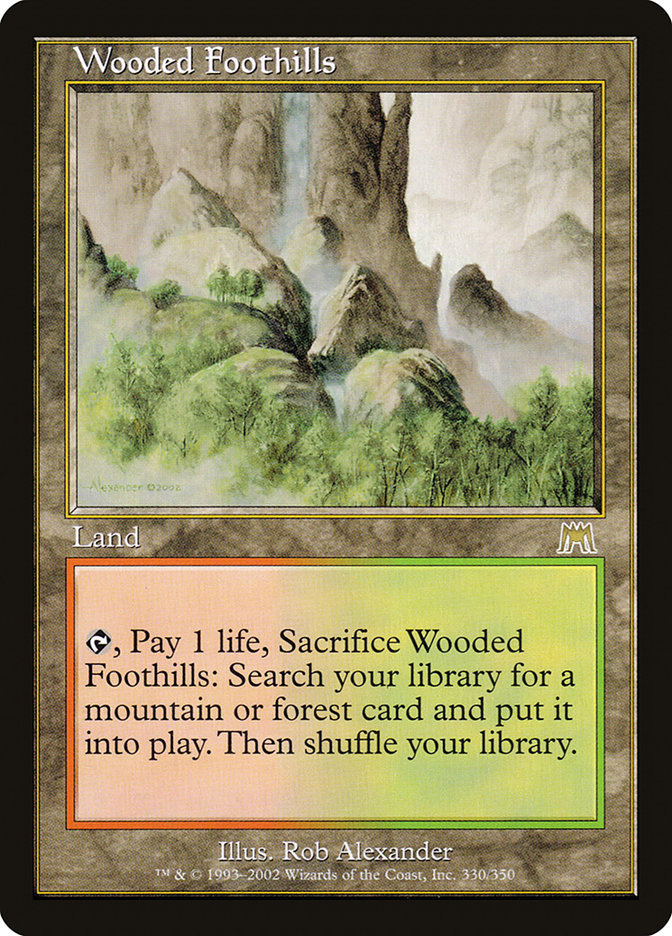 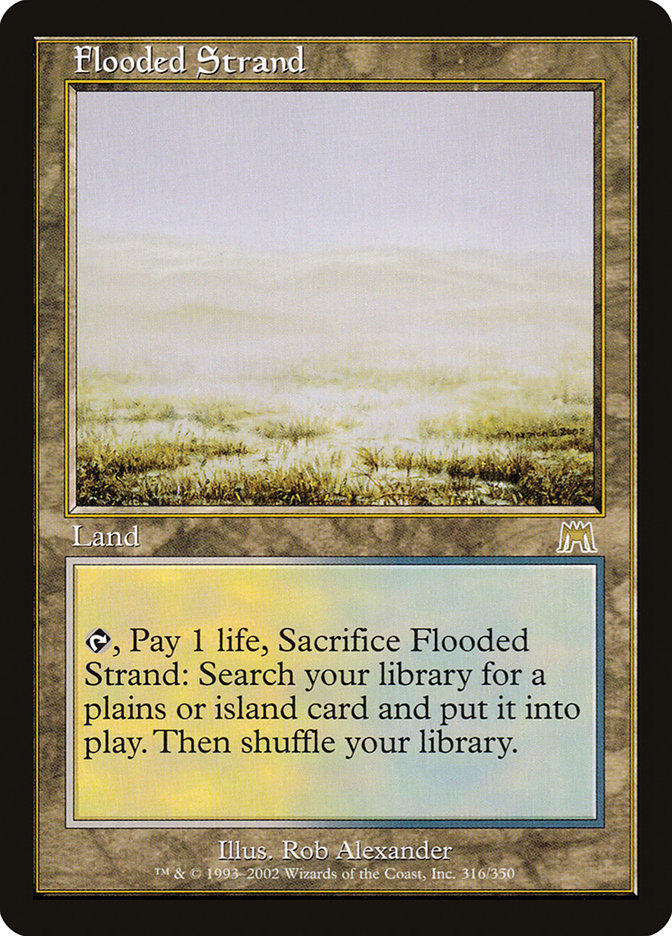 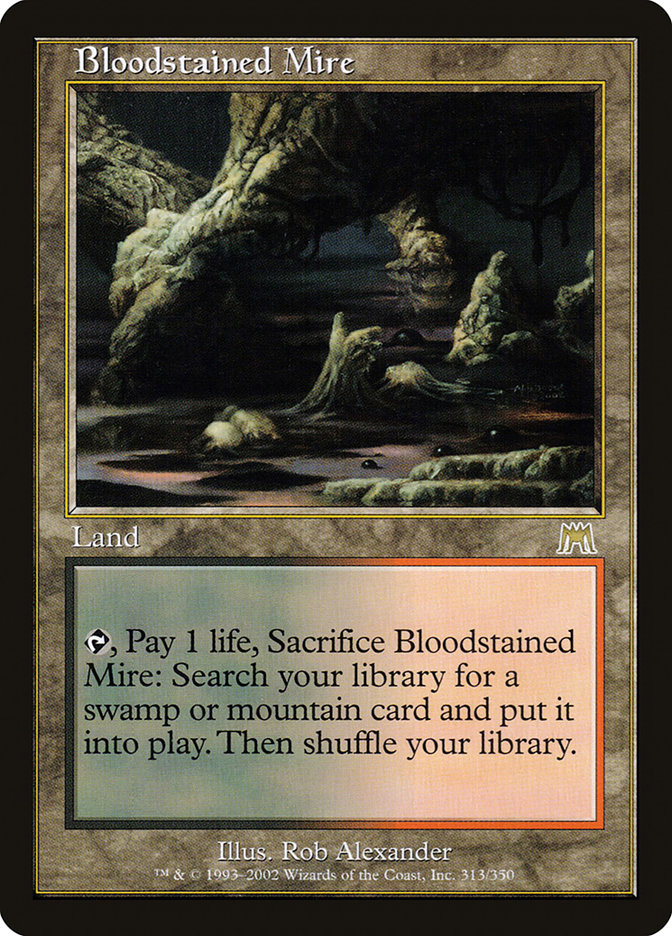 I have seen some speculation that these showing up in Khans means we are likely to see the enemy color fetchlands later in the block. I would highly doubt
it. The enemy painlands are what offer the mana fixing to offset the allied fetches. Fetches are the big guns when it comes to selling sets. WotC wouldn’t
squander two of their best sales drivers when it comes to reprints within the same block.

Now that we know why they’re here, what are we going to do with them? For Standard, the big winner is clearly Courser of Kruphix. Courser was already set
to be a major player in the new Standard since the departure of cards like Sphinx’s Revelation means the format is poised to become much better for the
kind of midrange decks in which the value centaur thrives. Fetchlands have excellent synergy with Courser since they not only net life rather than lose it,
but they also offer significant control over your draw steps. With fetchlands, you can use the information you have about the top of your deck from Courser
to shuffle away cards you don’t want to draw or get extra shots at hitting a land to put into play.

It’s hard to say much more about how fetchlands will play out in Standard without seeing more cards from the new set. I try not to use too much energy
speculating on what a format might look like after rotation since there’s a lot of important information missing. Modern though, is a format that we know a
great deal about already. What sort of effect might they have there?

Well, the biggest effect is what we talked about above – accessibility. More fetchlands in the system means more people with fetchlands, which means the
possibility of more decks with fetchlands. I would not be surprised to see a decline in the popularity of many of the previous “budget” decks like Merfolk
that play few if any fetchlands.

But even outside of simply having more fetchlands available for people to play with, we now have different versions in the mix. Previously, the situation
with mana fixing in Modern as far as fetchlands was concerned benefited enemy color combinations like G/B and U/R. Sure, anyone can use a blue fetch to get
an Island or any of the Ravnica shocklands with Island in its type, but only U/R or U/G could use the same fetch to get either of their basics.

This may seem like a minor point, but it’s far from trivial. Take a look at this list:

This deck has three basic lands – two Forests and one Plains – neither of which can be searched up by the same fetchland. And of the twelve fetchlands in
the deck, only five of them can get basic Plains, which means that a lot of the time when you want white mana, you’re going to have to pay two life for it.

This list has more ways to get both basic land types – almost double for basic Plains – and better options for fetching non-basics, because any fetch in
the deck can get any of the shocklands. It’s not an earth-shattering change by any means, but it allows the deck to operate much more smoothly in general.
Saving two life here and there can help in aggressive matchups, but mostly isn’t that big of a deal.

It is a big deal though, when you take the sideboard into consideration. This deck plays Blood Moon! Blood Moon certainly is a lot more effective
when you are able to cast your own spells while it’s in play. Navigating your own Blood Moons without being able to easily fetch the correct basic lands
for you to operate is no easy task, and having almost twice as many chances to be able to dig up a Plains is more than just a quality of life change – it’s
something that can have a big impact on your win percentage in games involving Blood Moon.

For less aggressive decks though, just the difference in life loss can make a huge impact on their viability. We’ve seen a lot of Jeskai, in both control
and aggressive versions, but we haven’t seen very much U/B or Grixis. How big of a deal is Polluted Delta for a deck like Faeries that has cards like
Bitterblossom and Thoughtseize taxing its life total already? The Vendilion menace has seemed like it was at the edge of viability already, is this enough
to push it over the edge?

Suffice it to say that fetchlands are a really big deal, and they’re going to have a huge impact on all Constructed formats once they’re legal.

But fetchlands aren’t even the only cards we’ve seen so far, even if they are certainly the most exciting. Let’s take a quick look at some of the other
stand out cards that have been spoiled so far. 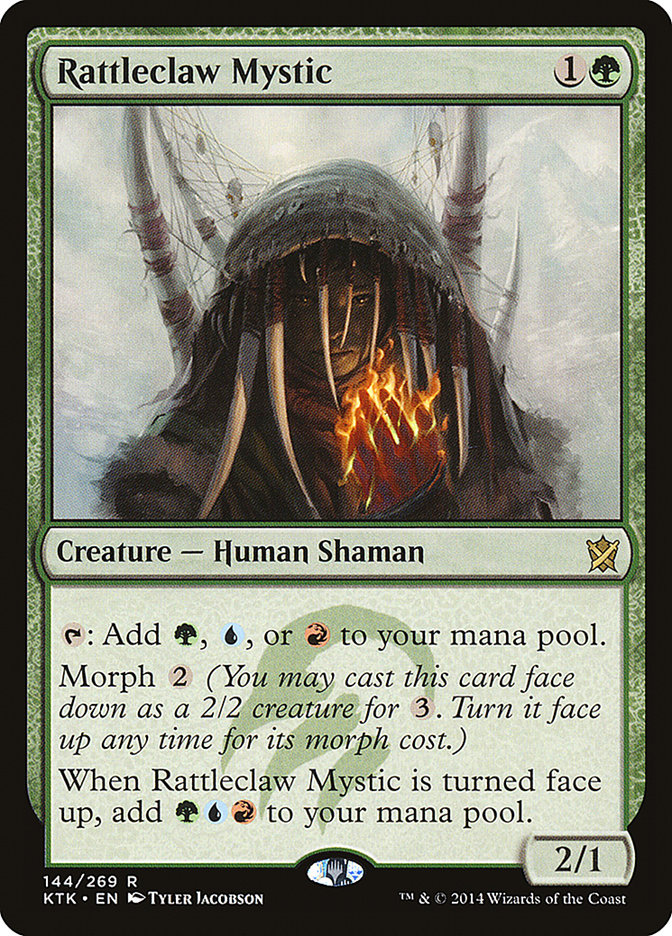 It’s no Noble Hierarch, but what is really? Rattleclaw Mystic is an interesting card. Not only is it a mana accelerator, but it’s a reasonable body for
combat too, not unlike Lotus Cobra back in Zendikar. Rattleclaw Mystic also shares the potential for facilitating explosive turns, though not nearly to the
same degree. At best, Rattleclaw Mystic’s morph ability can let you play a big spell one turn early, though it is worth noting that it can also fix your
mana in the process. You can actually morph Rattleclaw Mystic for three colorless mana, and then turn it face up for two colorless to generate GUR, which
can potentially get you out of a jam when you’re mana screwed. 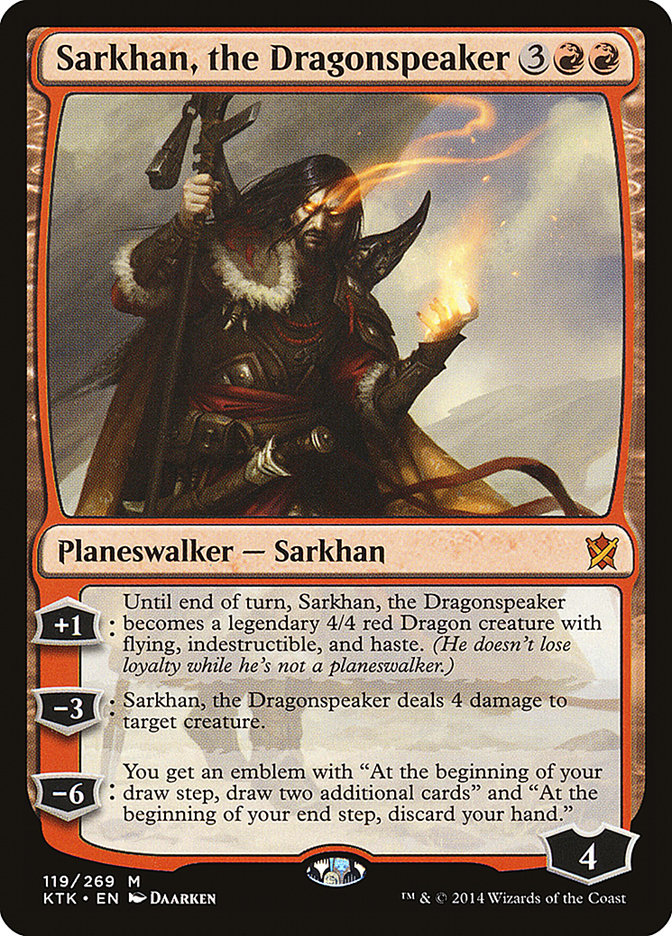 Now this is my kind of card. The new Sarkhan is a serious customer. And it’s a good thing too, because he’d really gotten a bum rap in his previous
incarnations. How could a planeswalker who is obsessed with dragons be as lame as Sarkhan Vol and Sarkhan the Mad? Sarkhan has never really made an impact
on a Constructed format before, but that’s about to change.

The new Sarkhan offers both important elements of any effective planeswalker: the ability to help control the board, and the ability to win the game if
unchecked. Sarkhan’s +1 ability makes him the enemy of opposing planeswalkers everywhere, letting him fly over and take out something like a Kiora or
Xenagos the turn he hits play and threatens to come back for more. He can also just kill an unprepared opponent this way, since he becomes an
indestructible dragon–which, I would just like to point out, is pretty damn awesome.

It’s worth noting that Silence the Believers does deal with Sarkhan when he turns into a dragon since it is an exile effect, and Hero’s Downfall can still
kill him in response since he’s still a planeswalker until the ability resolves. That’s sort of a bummer since I expect those to be the most played removal
spells in the new format, but that doesn’t mean Sarhkan is even close to worthless.

Even if he is likely to die, you can still fire off his -3 ability to deal four damage to a creature – conveniently just enough to kill a Courser of
Kruphix, who – as mentioned earlier – is sure to see a lot of play in the new Standard. Five mana to deal four damage certainly isn’t a particularly good
deal, especially since it takes several turns to get enough mana to fire it off once again, but when it comes attached to a dragon-body, it’s hard to turn
it down.

Sarkhan’s ultimate is also pretty awesome. It should be no surprise that an emblem that draws two extra cards per turn is pretty amazing, though it’s
certainly at least somewhat less exciting when you have to play them all right away or lose them. At first glance my thought was that you’d never use the
ultimate because you’d have already long since killed them by attacking with a dragon, but it’s only a -6, and Sarhkan starts at four loyalty! You can
threaten to go ultimate with Sarkhan very, very quickly, which can put your opponents in a really tight spot if they can’t attack him right away.

All in all, Sarkhan is pretty incredible. He’s quite the offensive player and puts your opponent under tremendous pressure. He can even play defense in a
pinch. I would be shocked if he isn’t a card that I play a whole lot of over the next year or so of Standard.

What do you think? What are your favorite cards you’ve seen so far? What cards do you think will have the biggest impact on the new Standard?