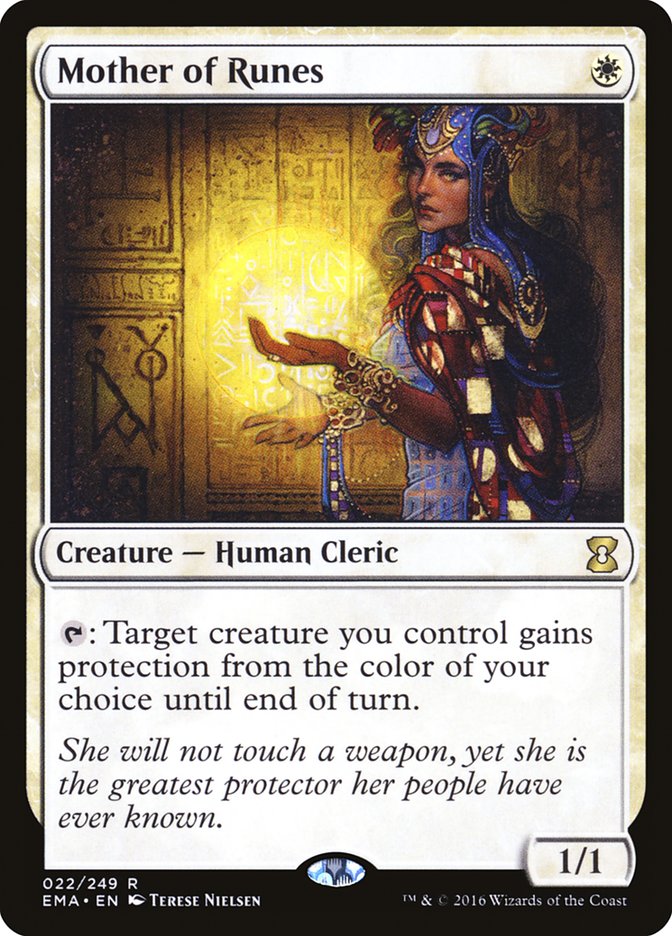 Scabs is Thomas Enevoldsen, one of, if not the best Death and Taxes players to pick up a Mother of Runes.

Delver aims to disrupt you with Wasteland and Stifle and to play a very low-resource game with the opponent. Death and Taxes has the same plan, but goes far over the top with it. Instant-speed Aether Vial activations are a nightmare for a “counterspell, tempo, creature combat” deck like Delver.

This particular build of Death and Taxes looks really tight, as I would expect to come from the hands of Thomas Enevoldsen. Not going fancy with Palace Guard and instead sticking with the cheaper Banisher Priest. Just running enough Recruiter of the Guard to get by on toolbox and value. Some key one-ofs to tutor for, all of which are completely fine in multiple matchups on their own.

The sideboard looks fantastic. Some Path to Exile to complement the Swords to Plowshares. A nice assortment of graveyard hate to work with given the particular need. Gideon, Ally of Zendikar looks like the best “non-creature big thing” that you could want after sideboard. No Cataclysm, a card I’ve passionately disliked ever since I first saw a Death and Taxes sideboard. I also don’t like Armageddon, for the record. 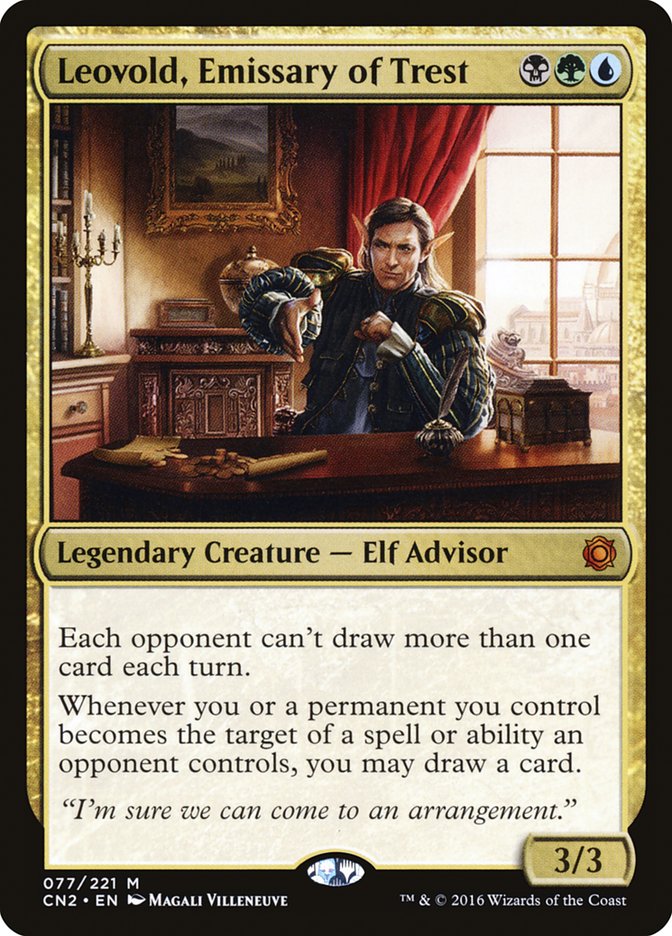 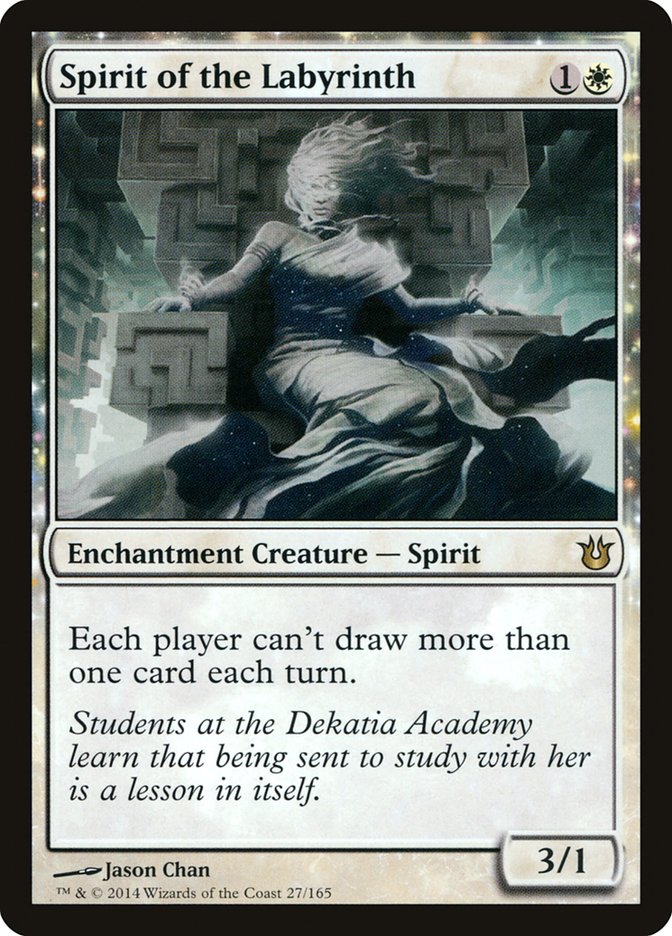 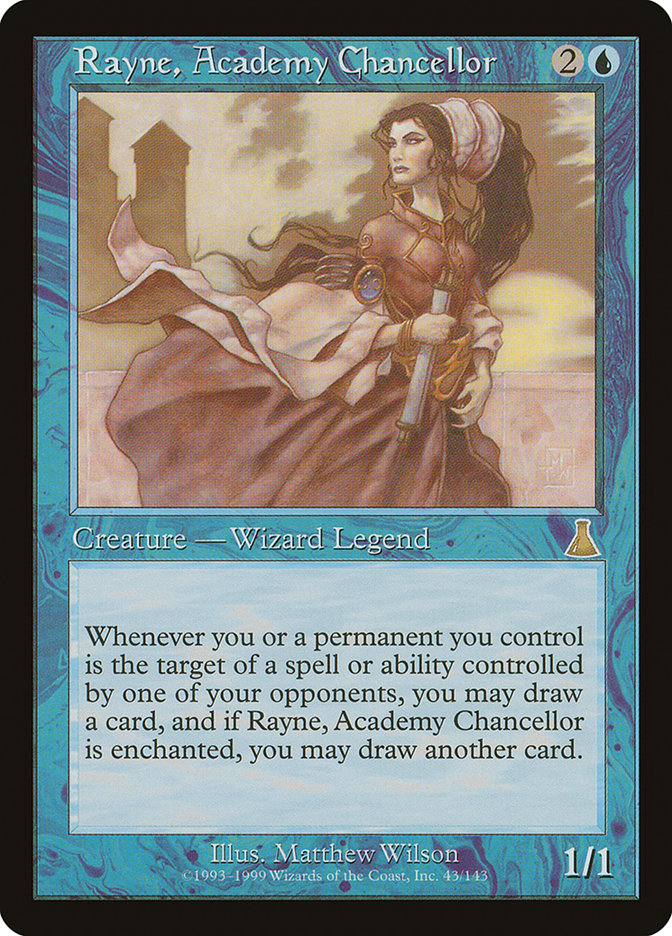 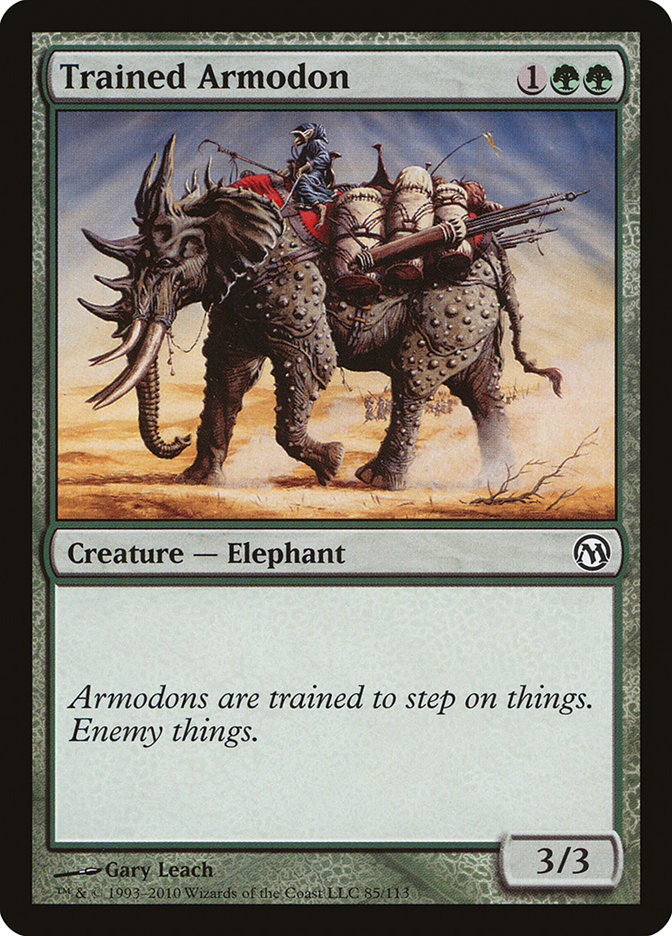 What does Leovold, Emissary of Trest do? Of course you’ve read the text box, but what does that really mean in the context of Legacy games?

Each opponent can’t draw more than one card each turn.

Spirit of the Labyrinth is a powerful card from Death and Taxes that puts a stranglehold on any deck that full of blue cantrips. The Spirit also sometimes has a tough time being relevant in combat with its one toughness. Leovold is bigger and better than that (if you can cast him).

Whenever you or a permanent you control becomes the target of a spell or ability an opponent controls, you may draw a card.

This means the obvious creature removal spells like Swords to Plowshares, Abrupt Decay, and Lightning Bolt. The key word in that sentence is permanent. We’re talking Wasteland and Rishadan Port. We’re talking people blowing up your artifacts or enchantments. If something on your side of the battlefield is targeted by the opponent, for any reason, pluck one off the top of your library.

Quite a powerful card, but Leovold comes with his own set of drawbacks. First is the very restrictive mana cost. Leovold just can’t slot into any deck, but there are plenty of Sultai variants going around for him to find a happy home. 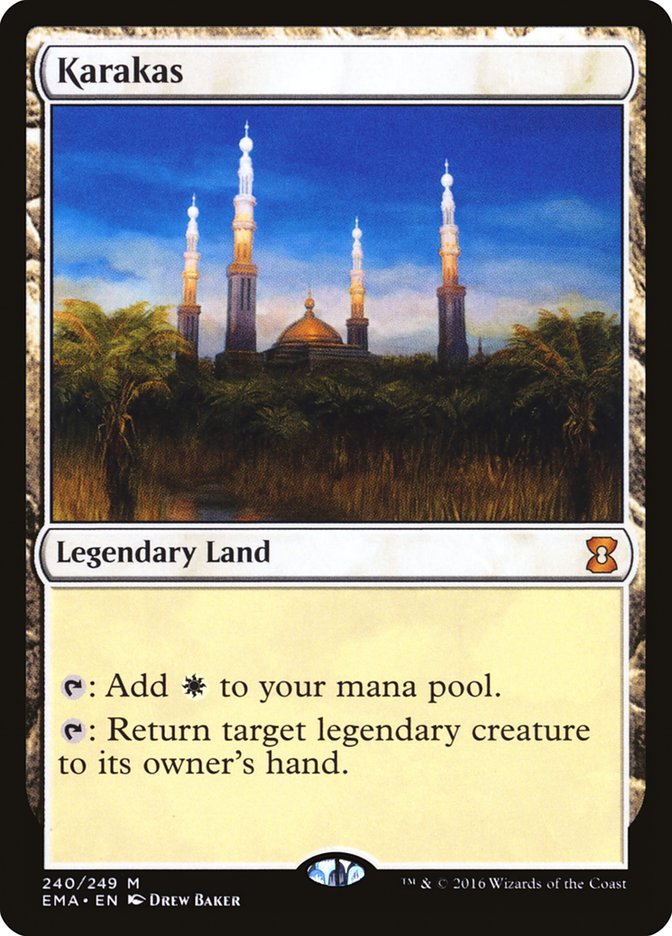 Next is his vulnerability to two of the top Legacy cards: Lightning Bolt and Karakas. Both deal with Leovold very efficiently from a tempo aspect. You do get to draw a card, which is rather nice. Overall, given the very cheap nature of Legacy, I much appreciate incidental card advantage, as often the player ahead by a single card wins in a very attrition-heavy matchup.

Notably, those Sultai decks are already full of card advantage with Baleful Strix and Shardless Agent, so it’s unclear if another card is what you need. Still, with Force of Will and grindfest matchups like Miracles, any bit helps.

Let’s look at some Sultai variants that’ve already adopted Leovold, Emissary of Trest into their decks.

Shardless Sultai is a great fair deck to combat other fair decks, particularly ones interested in fighting you on a one-for-one basis like the Delver decks. It also has a reasonably varied assortment of casting costs among its spells, which gives Shardless Sultai resistance to cards like Counterbalance and Chalice of the Void. 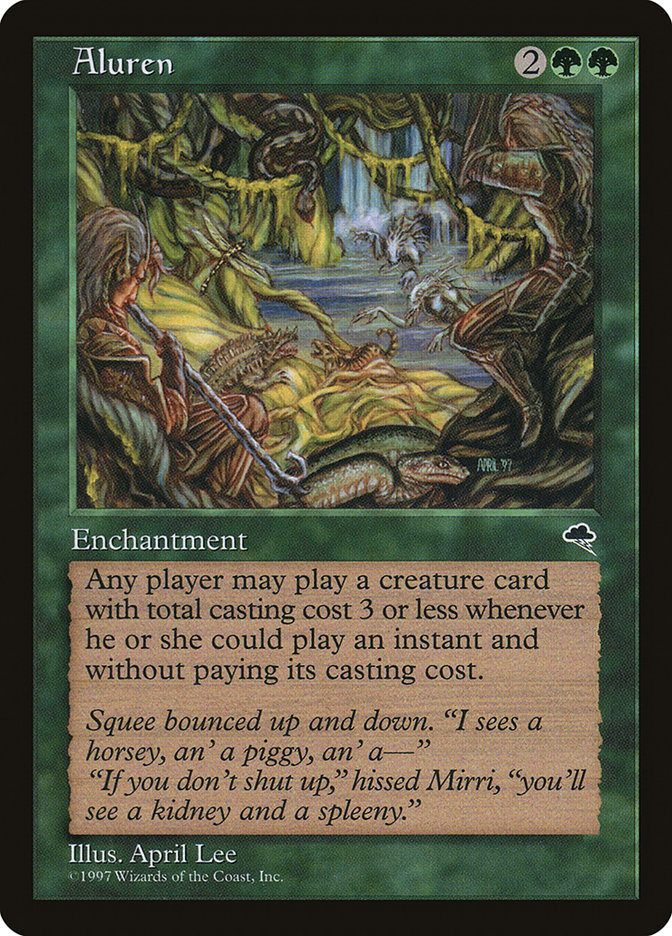 Aluren is an old English word meaning ‘paradise’. The More You Know.

As a creature-combo aficionado, Aluren has always been a favorite deck of mine, as well as of Cedric Phillips and Gerry Thompson. It works by creating a value-loop with Cavern Harpy and either Shardless Agent or Baleful Strix. Eventually a Parasitic Strix is found to drain the opponent out on the spot.

Older versions played Imperial Recruiter and more silver bullets to both piece together the combo while having interaction like Reclamation Sage or Bone Shredder to tutor up. Not-so-older versions exchanged Imperial Recruiter for Recruiter of the Guard and played some white interaction creatures like Containment Priest and Meddling Mage. This new strictly Sultai build plops in some Leovolds to have a complete and functional deck.

What does Leovold add to the synergy of Aluren? In short, nothing. It’s simply a very strong card that increases the overall power level of the deck. Leovold, Emissary of Trest offers enough disruption as well as enough protection where those pros outweigh the cons of having a fourth color in the deck, which include vulnerabilities to Wasteland as well as general mana problems.

Also an Elf? Why not.

Akira Homna Top 8ed the last Legacy Grand Prix in Chiba with his innovative take on Elves. The archetypes already wanted access to black mana for Deathrite Shaman and sideboard cards and it’s not much more work slipping in a Tropical Island for a Leovold hardcast. With Birchlore Rangers and Green Sun’s Zenith, you often won’t even need blue from your lands.

Those Nissa, Vital Forces are cool, though I’m rather hesitant to agree with their maindeck necessity. They’re very good in post-sideboard games when people are aggressive at killing your Elves to keep you off of Natural Order or what not. I’d recommend putting the Nissas in the sideboard for now and bringing them in very often. 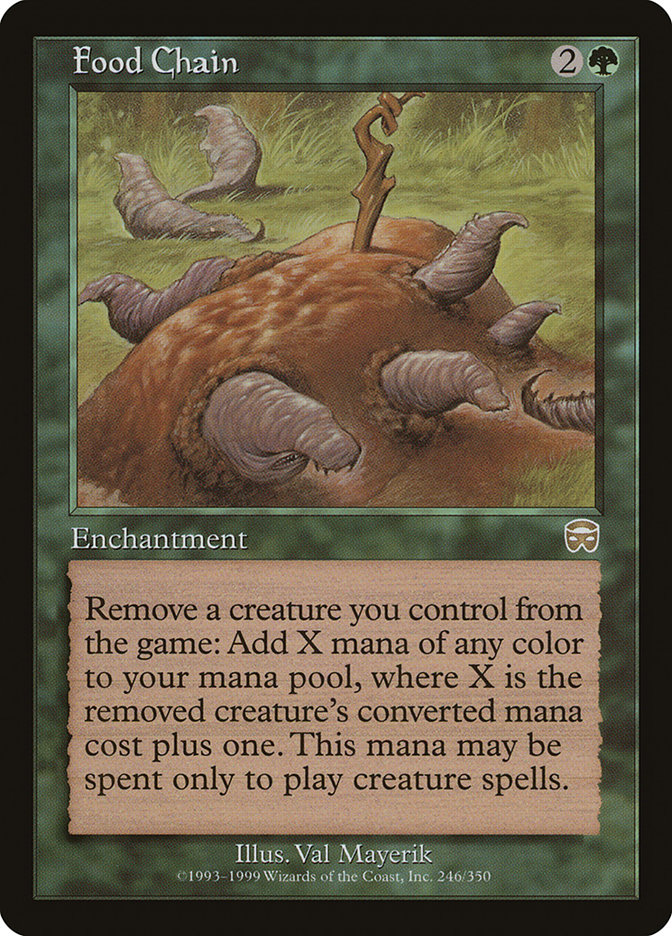 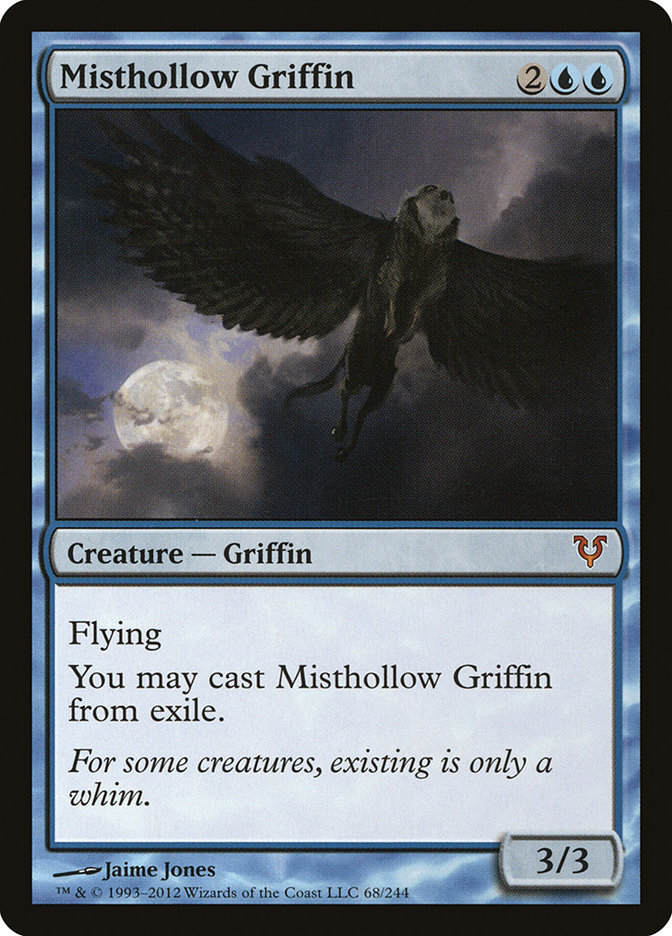 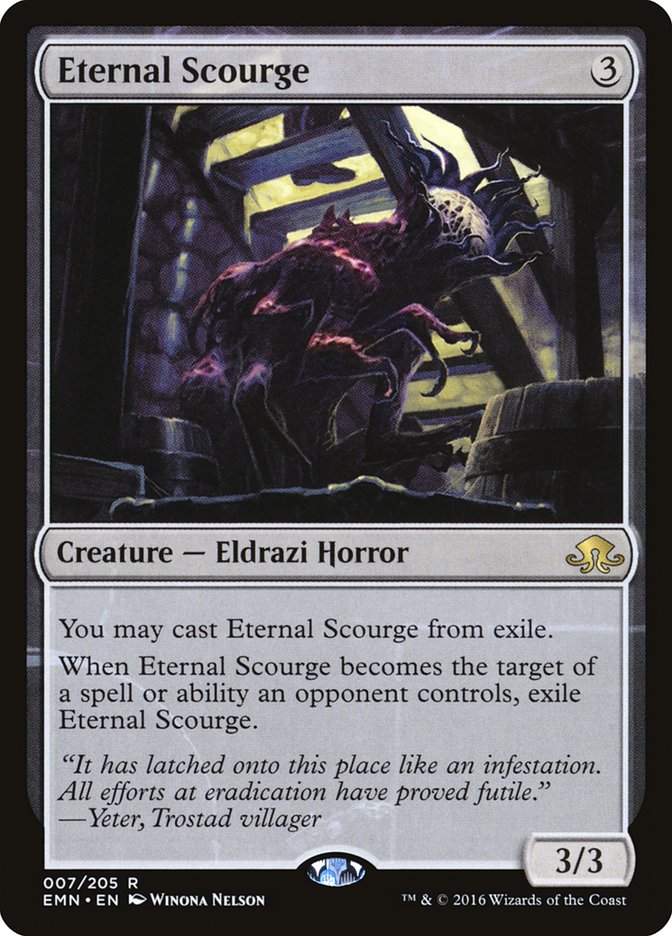 Food Chain has always been a deck I’ve had my eye on as a creature combo option with a lot of the grindy pluses that Shardless Sultai has to offer.

The deck functions with its namesake Food Chain on the battlefield, exiling creatures that you’re able to play from exile like Misthollow Griffin or Eternal Scourge. Each iteration of exiling and recasting generates one mana useable only to cast creature spells. With the abundance of creature mana, eventually a Fierce Empath is cast for The Big Thing, which can be a Tidespout Tyrant to return all of the opponent’s permanents to their hand or Emrakul, the Aeons Torn to take an extra turn and set up annihilation and/or lethal damage.

I always liked Vela the Night-Clad as a win condition that could be pitched to Force of Will. She never really caught on, though. 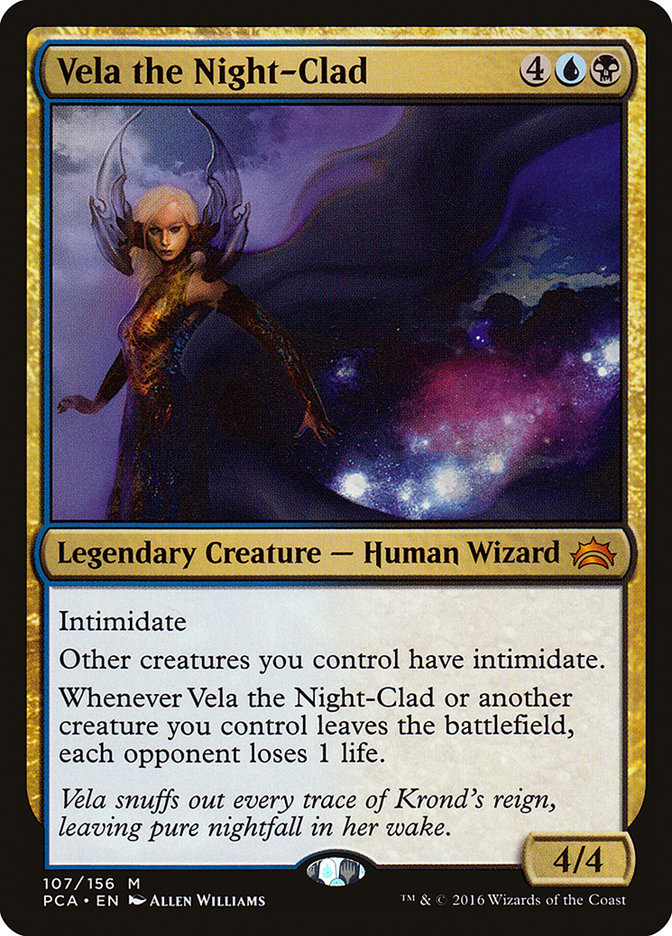 However the PC goes, I’ll hopefully my Grand Prix Louisville deck figured out by the time it comes. I don’t mind spending extra hours on Legacy now, since it’ll pay off twofold as the next big event I’ll be attending also happens to be Legacy.

I think I’ve gotten Modern figured out well enough. Standard will come down to choosing a top deck and playing it as best I can.

Legacy is a tough nut to crack.

I’m currently deep in the tank trying to emerge with the Legacy deck to combat Four-Color Delver and Miracles. Leovold, Emissary of Trest seems to be too great to pass up. He’s a reasonable threat with two very relevant forms of disruption/interaction tacked on quite smoothly.

Maybe I’ll stick a Bayou, a Green Sun’s Zenith, and a Leovold, Emissary of Trest into Infect and call it a day.