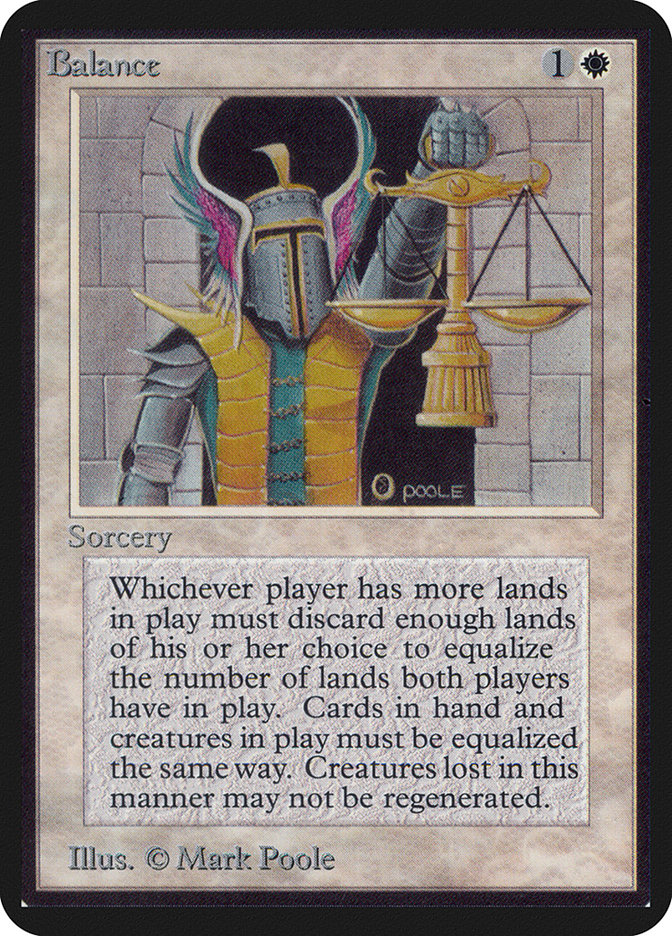 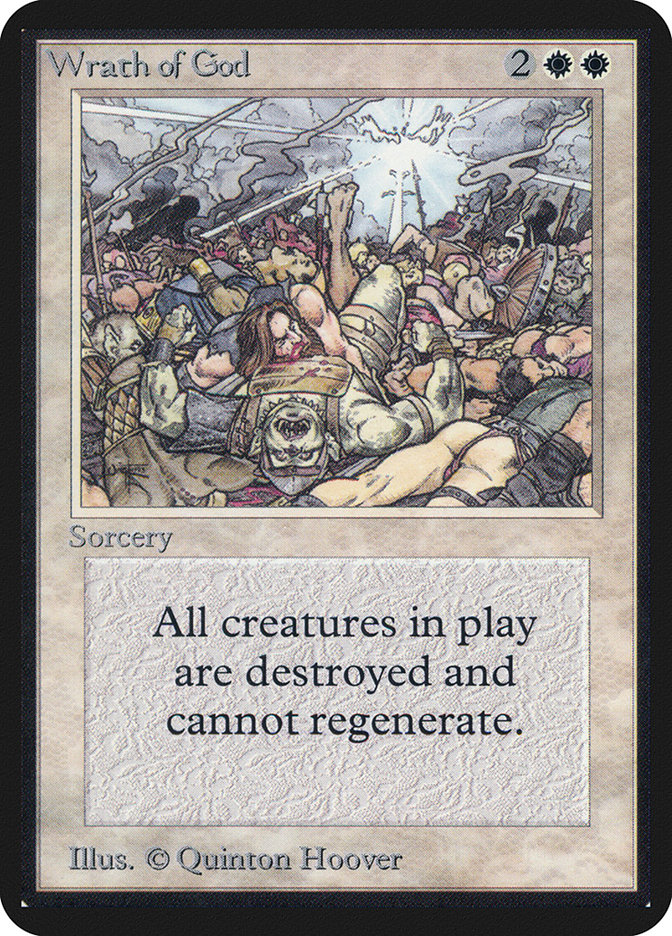 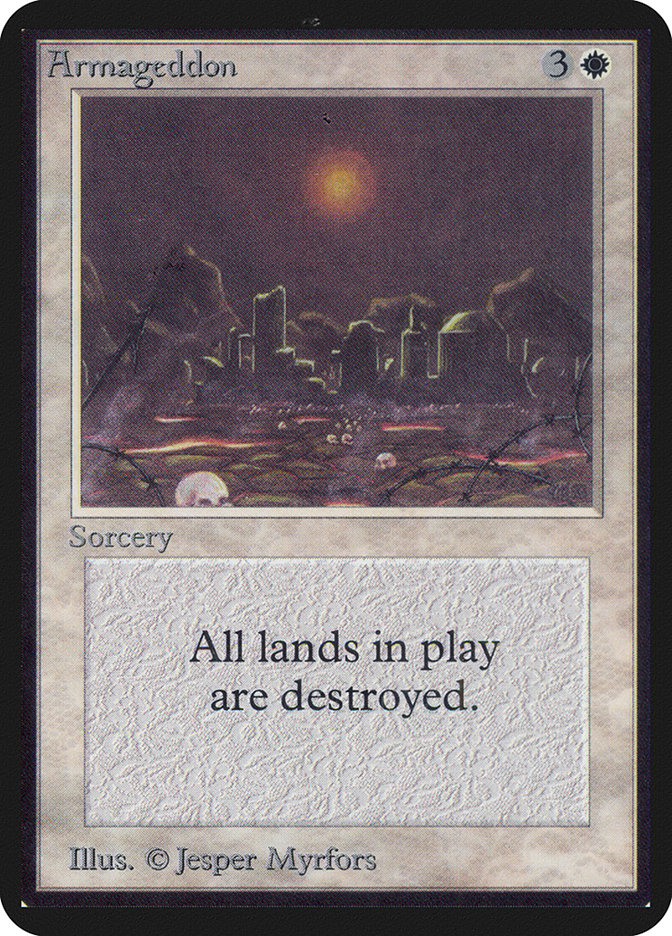 Dating all the way back to Alpha, symmetrical effects have been marquee cards in Magic. Repeatedly, these cards have shown that they are extremely powerful because you can plan for the symmetry and break it. Balance doesn’t account for artifacts you have cast. Wrath of God doesn’t kill your creatures if you play none or hold the best ones back. Having no lands post-Armageddon doesn’t matter if you have already cast your spells.

Extrapolated up a level, tournament Magic itself is a symmetrical effect. Everyone has the same sets of cards for Constructed or the same types of packs to open for Limited. When you get bogged down in testing for a format, you are often stuck in a symmetry point. You are doing all the known things, but all the known things only do exactly what people know they do.

You need to break the parity. Develop a plan that doesn’t execute on the same level so you aren’t left to the mercy of “didn’t randomly miss a good attack” or “drew the right number of the best twenty cards” as routes to victory. The questions and procedures to go through aren’t anything new or hard, but people still get stuck in a rut time and time again. Your goal should be to develop a consistent plan that helps you break the cycle and actually get to something new and exciting.

Over the years I’ve been a big proponent of macro-level positioning. Playing a deck that is better than you are makes winning easy. How do you get to that point when the format is super-strained?

The same way you always aim to target a non-hateable strategy: go over or go under. The difference is that we are discussing some scenarios that might need a slightly finer touch than “eighteen Mountains, 42 Lightning Bolts.”

The first step to going under is determining if you can actually generate an advantage somewhere that leads to an end-game. In Standard that often occurs by generating traction; in older formats it often occurs via traditional tempo tools like using a zero- or one-mana answer to stop more mana worth of development or just killing them.

I’m going to focus on the Standard scenario for now, and a lot of the same things apply to Limited. Try to figure out if the traction-generating blowout actually gets you somewhere. To use simple terms, it doesn’t make sense to Giant Growth your Grizzly Bears to beat their Grizzly Bears aggressively if they are just going to cast Hill Giant, but if their next play is Warpath Ghoul or your Grizzly Bears is suddenly a Garruk’s Companion that generates real value on the retrick, then we are talking. This is why Gerry Thompson just didn’t care about early-game blowouts with G/W Tokens: because Dromoka’s Commanding over their Sylvan Advocate didn’t actually clear out a planeswalker most of the time, your attack was still not great with it the next turn or the turn after that. 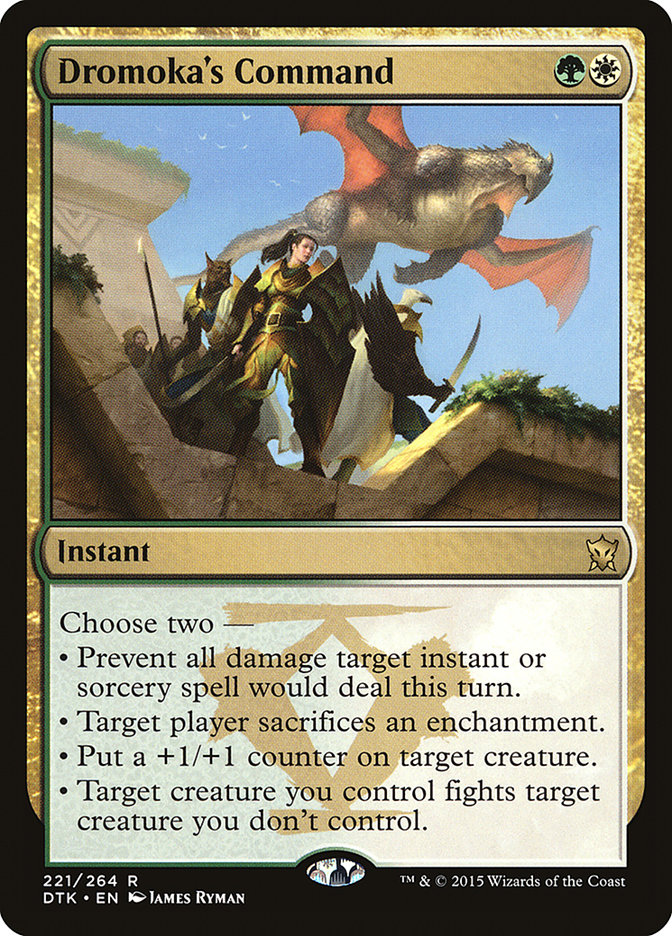 Three big signs you should be going under your opponent:

Note that sometimes going under presents as breaking up one key standstill to get ahead. It isn’t always about the fast kill; it’s about finding your opening. For example, I would consider sideboarding Red Elemental Blast as more one-mana answers to Counterspell and Jace, the Mind Sculptor as going under an opposing deck. Maybe the interaction happens on turn 5, but it is still aimed at getting ahead on tempo, which leads to some sort of traction. 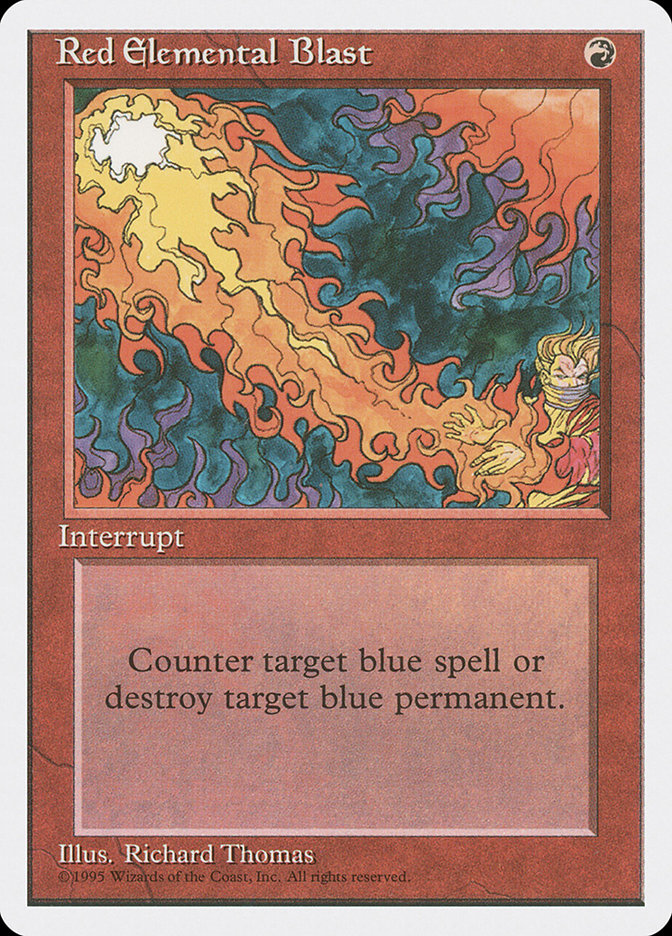 Going over is basically the reverse. There are no profitable simple exchanges anywhere, so you win via something that can’t be exchanged for or simply invalidates all of their cards.

This is what Gerry was doing in the above G/W example. No trades were good, so he needed something that transcended trades to take over the games where someone didn’t just run away with a Nissa-Gideon tag team.

Three big signs you should be going over your opponent: 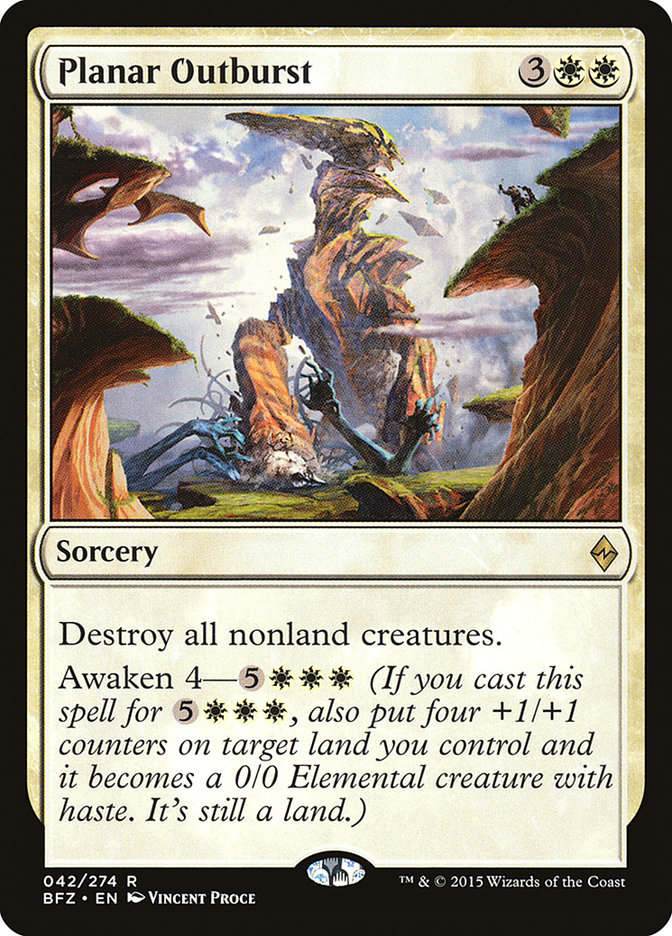 When looking for ways to go over the top of people, don’t dismiss weird or narrow effects. Going under people is usually easy: look at the top right corner of the card and make sure there isn’t a big number in the mana cost. Going over can be a bit more finicky. If you have enough time, who cares that this effect costs five, six, seven mana? That isn’t the resource you care about. Same with strategies.

Current Standard appears to be very slanted towards going under people with Smuggler’s Copter and Toolcraft Exemplar, but that could change on a dime if answers are found. When that happens, swinging back the other way hard is a very good proposition and the format has many ways to deliver that.

Not only do we have Emrakul, the Promised End, but we have the possibly more game-ending Ulamog, the Ceaseless Hunger. If there is a candidate for going too far over, this might be it.

We also have Metalwork Colossus. Nice Puzzleknots, I’ll be over here casting Gearhulks….. oh, wait, you just have 30 power and I died. That sucks! If only your entire deck didn’t set up to do this exact thing…

This isn’t “who’s the beatdown” here. The direction you go can take proactive or reactive stances. The key is figuring out what cards provide those edges and which directions they point you in.

Aside: I’m pretty sure I reference Michael Majors’s Traction article about once a month. It really is an all-time great theory piece for the way Magic is currently designed and played.

The problem with everything above is that macro-positioning is at its best when you can completely blindside people, which has gotten harder and harder with information flow. Sure, you might crack a Pro Tour with all-new cards and decks that get people on one axis when they expect to be Bant Company-slogging each other. But after that when everything is known? That’s where micro-level things dominate.

The biggest part of this is just having a plan. Know what matters and don’t accidentally play for the wrong thing. A lot of this is matchup-dependent, but the key is to just try different things reliably and note it. What actually happens if you just try to race back in a Smuggler’s Copter mirror on the draw as opposed to trying to play a defensive role? When does it work and when does it fail? Is there a point of trading where you may have to try to turn the corner and go on the offensive? 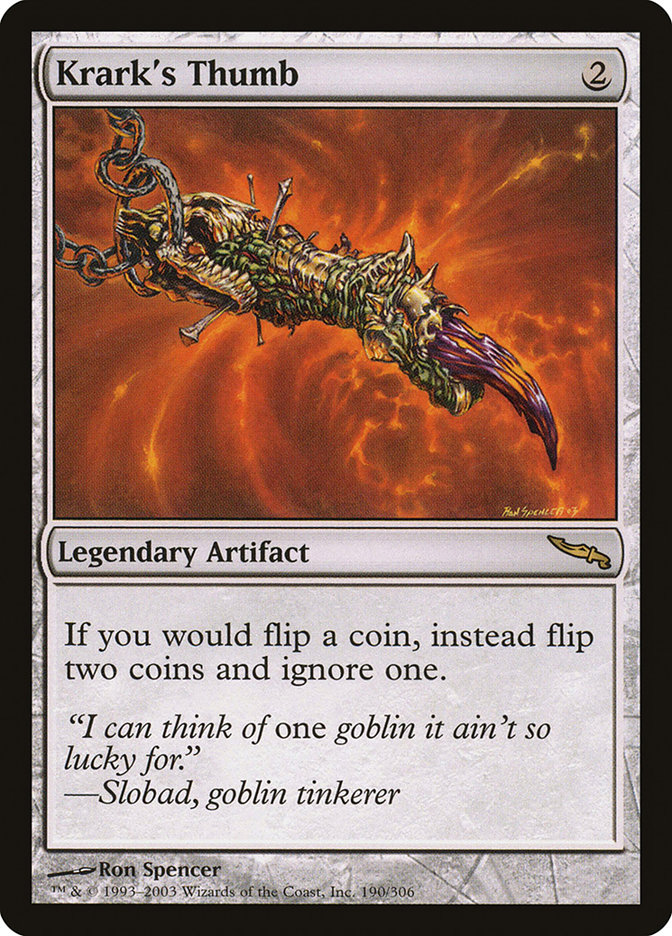 Be methodical in what you try. Don’t just play a ton of games and try things at random. Go with one or two heuristics, see how they perform in spots, and then examine and change if needed. Note you can use a lot of the above macro-level things to guide your way. If a play pattern immediately exposes itself as something that can be gone over or under easily, start the “reconsider and change direction” thing earlier.

One point of this that people tend to gloss over is mulligans. While I think the general strategy of “keep lands and spells that you can cast” is good, there are often requirements. Maybe you need a specific draw to break serve. Maybe you need to have lands to hit a specific drop. Think about these things. Bad hands are easy traps that set up games that feel like unbreakable nonsense. While a six-card hand may look worse, if there is a focal point your seven-card hand doesn’t have, it is going to be better. This is the same “mulligan to Leyline of the Void” mentality you have against Dredge, only with more things that can approximate Leyline or the lack thereof. Do you have a one-drop, a two-drop answer, a Liliana of the Veil? Small details absolutely define how a game plays out.

Finding these things can be hard, and knowing when one just isn’t quite working is harder. But knowing what you are looking for when and why is clearly the way to go, because throwing stock decks at the gauntlet and seeing what sticks is not how you win. It’s just how you get stuck in the middle of the pack.