Hello, and welcome to this edition of Sullivan’s Satchel. As of the writing of this I finished off the last few pieces I needed for a paper Legacy deck, Julian Knab’s Izzet Delver deck. I do not know why I did this. Ostensibly it is because there’s a shop in my area that runs Legacy events on Sundays, and I went there once to hang and the people seemed cool.

I think the reality is that accumulating cards for some purpose (a tournament, a hypothetical tournament, whatever) is so ingrained in me at this point that it feels like something that should always be in the rotation, like changing the filters in the furnace or getting the oil changed. I’m guessing that most of the satisfaction will come from loaning it to people who otherwise couldn’t play Legacy as opposed to actually playing with it myself, but that isn’t the worst outcome.

With that, the questions. As always, you can send in yours to [email protected] or DM on Twitter @BasicMountain. I answer some number of them, and in addition to all of that a winner is selected each time for the title of Question of the Week™, along with $25 in SCG credit. Win that approximately 150 times, and you too can (maybe) build a Legacy deck you won’t play.

What are your thoughts as a designer about damage on stack?

It was atrocious, and probably the singular moment the pro/pro-adjacent community soiled themselves the most thoroughly in public discourse, which is really saying something. For those of you who are newer to the game, “damage on the stack” references a combat rules set that existed from 6th Edition (late 90s) until M10. Without getting too much into the nitty-gritty, essentially there was an additional priority window after damage got “locked in,” so to speak, but before combat would actually resolve. So if I attacked with my Grizzly Bears and you blocked with your own, I could “stack damage” and then Giant Growth my Bear, so even if you have a Doom Blade for my Bear, your Bear would die as well, as the two damage got locked in once damage went on the stack.

Why does this suck so badly? In no particular order:

In short, one of the worst rules ever introduced into Magic (not totally indefensible at the time; the combat rules prior to 6th were an incoherent mess that also involved a lot of memorization), both in terms of intuitiveness, complexity, and allowing skill to manifest at the expense of memorizing things. Good riddance.

Broadly speaking, what do you believe to be the most misunderstood concept in MTG or general game design?

Designer frequently talk about the importance of “variance,” which raises alarms with certain segments of the player base. After all, variance is how they lose (as they imagine things) to weaker players, and while they may abstractly appreciate the need for weaker players to get their dubs, they still don’t want it to be at their expense. I was there once upon a time; I recall a PTQ where I overheard someone say they heard a Magic designer suggest that Beast Attack and Shower of Coals were at uncommon in large part to help weaker players win games of Limited. While I don’t know if that story is true, the thought of it was enough to make my blood boil.

Even though variance has value on that front, there’s a bigger picture. The novelty of any game is largely defined by how vast the possibility space is, and that space can only be so large without permitting variance as part of the experience. That isn’t just about new players, either. Mastery is best expressed by one’s ability to navigate an infinite number of permutations with ambiguous information, and that can’t manifest without random elements or some proxy thereof. I don’t think Magic would be a game people played for thirty or more years unless the random elements made Game #100,000 as stimulating as Game #100, and so variance is often misrepresented as a tool to get weaker players over some amount of the time, rather than about creating a vast array of experiences that make “just memorizing the steps” an impossibility.

Love The Resleeveables podcast. Question. Do you think we will see a more dedicated visit to Mirrodin with it being artifact heavy?

I don’t know, but Mirrodin is a popular enough realm that I imagine it is at the minimum under consideration for a return. It does come with some unique design challenges —”everyone plays a ton of artifacts” is a riskier and less organic starting point than, say, “gold cards,” and neither of the previous blocks came out all that great in my honest assessment. To me, the biggest challenge is spreading the incentives out the right way. If some people want to go “all-in” on the artifact stuff, I think that’s fine as long as that isn’t the best thing to be doing, and finding ways to make sure everyone has an artifact or two they’d consider is the more fruitful space and the space the previous blocks have been deficient.

People harp on the original, but Scars of Mirrodin was full of the same problems. Metalcraft (pretty all-in), proliferate (sort of open-ended, sort of not) and infect (extremely all-in) is a pretty rough distribution of mechanics inside of an artifact block. I would be shocked if a return didn’t happen within the next ten years or so, but solving the mechanical challenges is a tough ask.

Lastly, and the Question of the Week™, from Alex Wang:

Big fan of the column and the Recurring Insight series. I was wondering if you could talk about cards and design in the style of “Cancel with set mechanic,” “Bear with set mechanic,” etc. It seems like recent Standard sets have really relied on this type of design and I increasingly notice new “X with set mechanics”, e.g. 5 CMC burn spell (Farideh’s Fireball, Synchronized Spellcraft, Burn the Accursed, Pigment Storm) or 6+ CMC green fatty w/ lifegain (Ravenous Lindwurm, Honey Mammoth, Hill Giant Herdgorger, Rise of the Ants) (maybe some of these examples are loose). How long has this mode of design been around? I imagine that sets and cards are designed this way to keep power level within known limits; do you think they can continue to design Standard-legal sets this way in perpetuity? Will it get old eventually? Make it hard for cards to enter older formats?

Thanks for your insight!

There are a number of good reasons to make the derivative stuff you’re mentioning in your email. Some of it is literally logistics — allowing the designers to “paint by numbers” a bit at the lower rarities, with known quantities that play well in Draft, helps move the process along and allows the team to focus more on the higher-rarity designs and Constructed formats, which is a tougher and more important thing to balance. Even if you had unlimited resources and time such that that wasn’t a consideration, I still think some amount of it is really good.

To begin with, the designers have to assume that each set brings along with it some amount of new players. The experience can’t be optimized for them necessarily, but they should be kept in mind. Some of that involves defining the color pie — what do the colors do? That needs to come through in the lower rarities, the cards newer players see the most of. If you want red to deal damage, you could solve that by putting Shock into every set, but that sounds like something that’s engendering boredom from established players. “Shock, but with a small twist” keeps everyone happy; new players get to see something similar that defines the colors and set themes, and established players get to see something new but familiar. 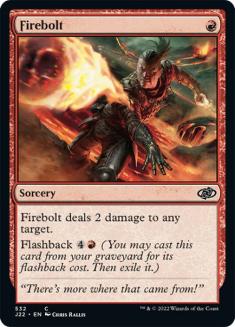 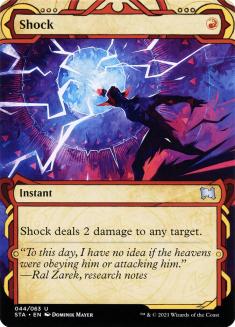 Sometimes the context is materially different. Yes, you can shorthand Firebolt to “Shock with the set mechanic,” but the set mechanic wildly changes how you might use the card. For example, you can mill or loot it away, something you can’t do with Shock, and sometimes you can cast it and flash it back in the same turn to kill a 4/4, something Shock can never do. That’s an extreme example relatively speaking, but almost all the cards are going to produce novel incentives or experiences that their baseline effect or previous incarnations of the derivative version can’t.

Lastly, sometimes the template is just the right thing to do. Take the Ravenous Lindwurm family of fauna. You’d like to have a big creature at common in green; that’s a color pie thing. You’d like to have it have an ability that speaks to green as well. So what should you do? Mana ramp? Not that great on a six-drop. Pump a creature? Sure, nothing wrong with that, but six-mana creatures are already good while you’re winning, do you want to tack something on there that biases towards being on the front foot? Something that flattens it out a little bit would be nice. How about gaining life? Simple, appealing, helps you when you’re losing, kind of everything you’re looking for there. Maybe you could do something else, I’m sure you can, in fact, but why mess with a good thing?

In short, easing the workload, remixing the hits, defining the color pie, and threading the needle between the often-divergent needs of new and established players are all great reasons to not reinvent the wheel each time one makes a new set.