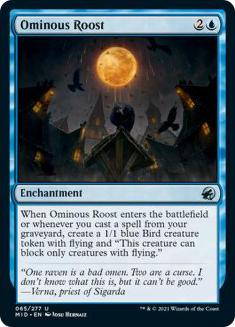 According to 17lands.com, Azorius has been the most successful color pair in Innistrad: Midnight Hunt Premier Draft by .7%, which is actually a pretty large amount.  Is it the strongest color pair? That's actually hard to evaluate, because it's played less than half as much as Dimir, so players might only win more because the archetype is less contested. But if it's the most successful deck, that strongly suggests that it's currently being underdrafted, meaning you should probably draft it more.

I've taken this advice to heart, and I've drafted Azorius in six of my last eight and four of my last four drafts, to a record of 27-4 in my last 4, and 36-8 in my last six Azorius decks.  This is to say that my personal experience supports the assertion that Azorius is the best deck to be drafting on Arena at the moment.

Why is Azorius so strong?

Two weeks ago, I wrote about how the format was driven by the strength of removal. This paradigm works perfectly for Azorius, because removal doesn't line up well against any of the cards you want, since you're looking for creatures that cost less mana than most removal spells that kill them, offer some kind of value when they enter the battlefield or die, or, in many cases, both.  I'm always drawn to decks whose core strength is resilience, and that describes Azorius in this Limited format perfectly.  In most of my games, it just doesn't feel like any of my opponent's cards matter because they don't line up well with what I'm doing.

The best Azorius decks have the lowest curves in the format.  They go under other decks, but use the graveyard so well that they simultaneously have great late-games and don't run out of gas.  This might sound somewhat unfair, or like it would be the kind of balance issue that designers would try not to print, at which point, I'd agree, but suggest that we're here anyway.

We know that this deck wins the most, I'm just unpacking why.

There are a few different sub archetypes of Azorius, but any of them are strong, and I don't think it relies on any particular card.  Honestly, the most important common might be Lunarch Veteran, because the easiest way to lose is against an aggressive opponent who can beat you before you can out value them because their early creatures just beat yours in combat, such as Boros or Rakdos, and Lunarch Veteran stops those decks from going under you.

(presented roughly in order of priority) 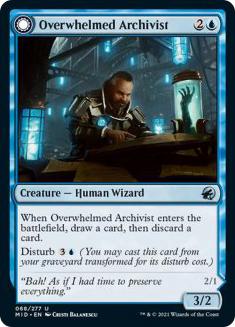 This card is just the total package. It's a good rate for its stats, offers card advantage if you can discard something you can cast from your graveyard, and offers value itself when you mill it.  This can play every role you want a creature for, so it's a safe pick that's always what you're looking for. 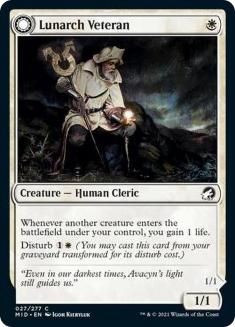 It feels weird to choose "disrespecting Organ Hoarder" as my spot to go against the stats, but I think Lunarch Veteran should be the highest priority common in Azorius.  I discussed why it's important in the metagame above, but I also just find that I can always build my Azorius decks to have plenty of ways to use their mana, so Organ Hoarder is more replaceable.  For a lot of the best builds of Azorius decks, I want to maximize the value of dumping a card in the graveyard, and Lunarch Veteran as the huge advantage that it's such a card.  It's also by far the most important card to pair with Ominous Roost, since it gives you time to take over with your flying army.

There are a lot of cards with higher win rates than Ominous Roost, but I'm reasonably confident that's because people aren't properly building their decks to maximize Ominous Roost, and it's felt much higher impact than other cards in my decks that are built to use it.  It's also bad in all but the most dedicated decks, which means it's not often picked by other drafters, especially if you're taking the cards that enable it, meaning that if you get one early it's not that unlikely that you'll get a second. 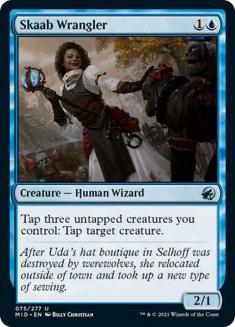 Azorius is great because it makes lots of cheap creatures.  Skaab Wrangler makes sure you won't lose games to fewer bigger creatures. 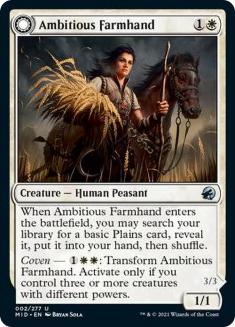 This is just such a clean value card, and a 3/3 lifelink is a huge body in this format. 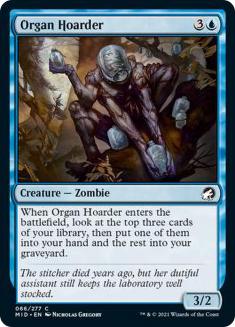 I'm not going to make the mistake of disrespecting Organ Hoarder too much, and I don't want to give the impression that it isn't amazing.  Between the card selection and the self mill value, this ability is very close to as strong as drawing two cards in this deck.  I want four to be roughly the top of my curve most of the time, but as long as I can avoid playing many other expensive cards, I'm happy to play as many Organ Hoarders as I can get my hands on. 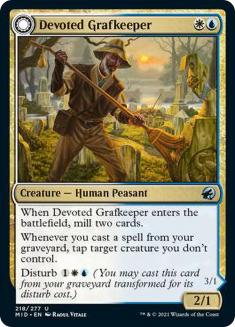 This is just the total package, offering a discounted, slightly weaker, but overall very similar card to Overwhelmed Archivsit. 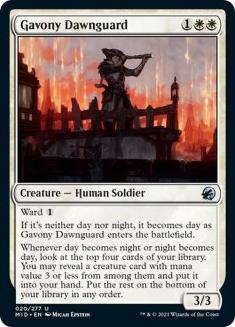 Some builds of Azorius want to have low creature counts, and might correspondingly prioritize Gavony Dawnguard less highly, but a 3/3 with ward for three mana and a terrifying threat of activation that can force your opponent to play their spells differently is just a great rate regardless of how reliably it finds a creature when you trigger it. 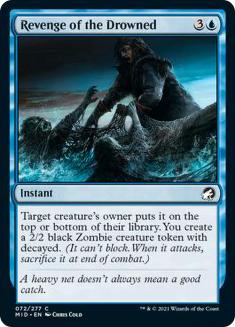 This has felt like the only removal spell I need, and it's great because it's so reliable.  It doesn't answer a creature forever, but it's always felt like it answers creatures for as long as I need. 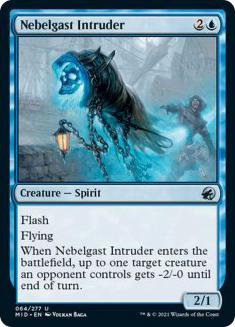