Magic: The Gathering Head Designer, Mark Rosewater, has provided details on the future of the game — including potential areas for expansion and improvement.

According to Rosewater, whenever the Design team starts building a set, they look for ways to include old mechanics in new ways — citing the proliferate mechanic, which first “appeared in Scars of Mirrodin block…” paired with -1/-1 counters and poison counters. Proliferate later returned in War of the Spark, but was instead paired with amass and planeswalkers.

Being such a deeply complex game, filled with numerous mechanics (both successful and not), Rosewater and his team are constantly “on the lookout for mechanics that showed potential that was never realized…”.

An example of a “rehabilitated” mechanic from Magic’s past is chroma. Designed originally by Aaron Forsythe for a “one-of card in Fifth Dawn“, Rosewater saw potential in the mechanic and decided to “save it for later.” It eventually debuted in Eventide to a less than stellar response from players. Fast-forward several years, chroma was reworked to be included as a “new” mechanic in Theros — devotion.

According to Rosewater, new frames “…allow us to spread into new design space” and help to accomplish three key objectives: 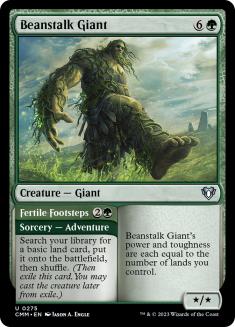 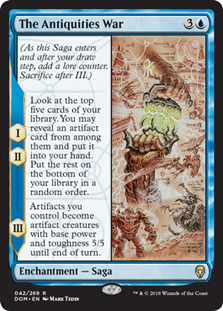 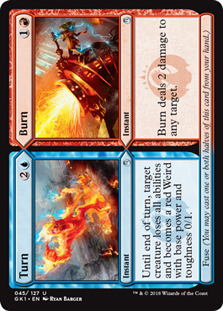 Despite the number of positives from introducing new frames, they also “come with a lot of baggage” and the Design team is limited on how often they can be used.

First introduced in Amonkhet block, these unique pack inserts provide ways to keep track of in-game components, such as marking creatures that are embalmed, or have -1/-1 counters placed on them.

Bringing back the Punch-Out inserts provides several benefits, including providing players better ways to represent the state of the battlefield and also provide “…enhancement to permanents on the battlefield.” 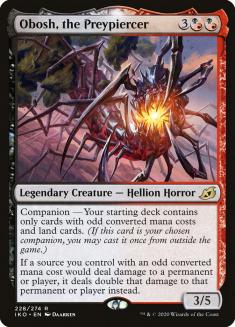 Companions are the most relevant example of cards that affect deck construction, and according to Rosewater, this type of mechanic could be expanded to work in two ways:

The trick is finding ways to tap into what makes them popular without producing the downsides in tournament play.