In today’s Banned and Restricted Announcement, Wizards of the Coast (WotC) has made changes to Brawl, Legacy, and most surprisingly, Vintage. 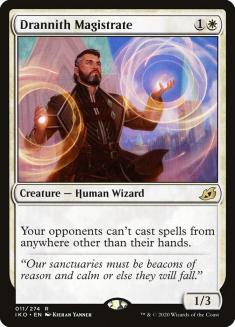 According to WotC, the decision to remove Drannith Magistrate was made with the mindset that individual cards shouldn’t shut down a “wide class of commanders”, citing cards like Sorcerous Spyglass as an example.

As for Winota, Joiner of Forces, WotC reportedly saw a drastic increase in playrate, leading to “reduced diversity of play experiences for Brawl players.” In short, Winnota is just too strong for Brawl. 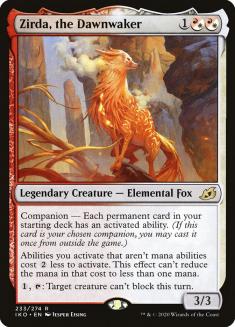 With such a large card pool at its disposal and many powerful, low-costed permanents already seeing play, the companion restriction for Lurrus of the Dream-Den was just too easy to build around.

Since Ikoria: Lair of Behemoths was released on Magic Online, several variants of Lurrus decks have been recorded maintaining win rates “above 55%” and “matchup data indicates that metagame forces alone aren’t sufficient to keep these decks in check”.

Additionally, WotC reported seeing a steady rise in decks utilizing infinite mana combos fueled by Zirda, the Dawnwaker and Grim Monolith. While not currently seeing a drastic amount of play, analysis of the Magic Online metagame data “indicates that these decks would become problematic in both win rate and metagame share…” in coming months.

Coming as the most surprising change, WotC has decided to outright ban Lurrus of the Dream-Den in Vintage — a format that typically never bans problematic cards, opting instead to restrict the number of playable copies to one.

Similar to Legacy, the deckbuilding restriction attached to Lurrus was just too easily met in Vintage due to the large card pool and high amount of powerful, low-costed permanents (such as the Moxen, and the infamous Black Lotus).

According to WotC, the win rates of several Lurrus decks in Vintage have “surpassed 55% in Magic Online league play and collectively, decks using Lurrus are representing too large of a portion of the metagame with no indication of a shift away from this trend.”

While no changes were announced for Standard, Modern, or Pioneer, WotC is very aware of the impact of companions on these formats and intends to keep a close eye on their development.

While the metagames for these formats are currently “shifting too quickly for data to indicate what, if any, card or archetype poses a problem” they are watching for “signs of long-term health issues resulting from high metagame share of companion decks…” and are “…willing to take steps up to or including changing how the companion mechanic works.”