Nieh is a member of the Council of Colors, an advisory council that informs the rest of the design studio about the color pie. Nieh is the white representative and works on adjusting and suggesting cards that could be white or could help white get things the color typically doesn’t have in Magic. The Council of Colors listens to the feedback from play testers and the player base and diagnose the problems. Lately they have had to address that white needs more ramp and card draw, which then leads the members to figure out how exactly they will implement the changes in future sets. The goal is to make flavorful white cards that do these things while not duplicating abilities from other colors.

After some discussion on theory and how to come up with these changes, the duo talked about specific cards from Strixhaven that show off things they are trying in white. 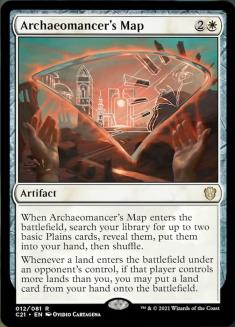 Archaeomancer’s Map is both a form of card draw and possible ramp that operates through fairness and balance. By always getting two Plains, the card has a solid fail state of simply drawing two lands for one card. 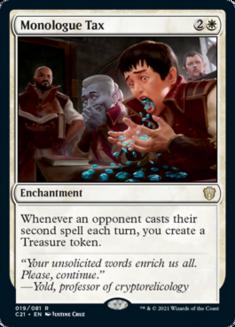 Monologue Tax is another rule setting card that gives you a bonus if people don’t play by the rules. It scales with opponents who look to break the rules more than others. 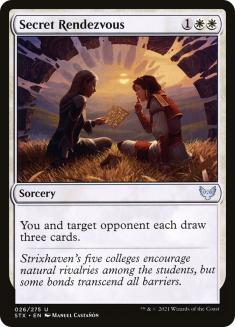 Secret Rendezvous is a symmetrical effect that plays well with groups that like politics in their games. They have a wide range of white card draw effects to try out and see how players respond while acknowledging not all styles of card draw will be appealing to all types of players. 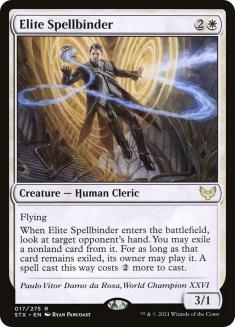 Elite Spellbinder introduces a new form of taxing and is targeted rather than a blanket effect like many taxing cards. This ability is a a novel and interactive effect that can change the way people play white. 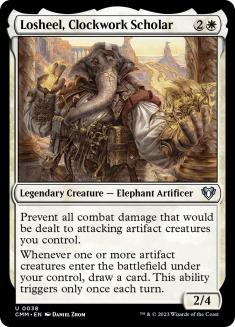 Losheel, Clockwork Scholar rewards white players for doing white things while not making players want to make infinite combos. By limiting the card draw to once per turn they can design the card without a mana gate for the card draw effect.

Verhey and Nieh made sure to reiterate that this is the tip of the iceberg for changes and improvements coming to white. Many more ideas will be coming in later sets, with Strixhaven being one of the first sets with fundamental changes to white’s color pie.

Emma Handy's Proliferate Cube is back on Magic Online. Ryan Overturf shares the latest changes, his new first picks, and the power of the Talismans.

Sullivan's Satchel: Commander Cards In Constructed, One-Off Designs, And The Power Of Collaboration

Patrick Sullivan answers mailbag questions on Commander-leaning cards appearing in Constructed and why some designs are best in small doses.
View More