Courtesy of Wizards of the Coast (WotC) and TCGplayer Infinite, check out the latest version of a Legendary Vampire from Innistrad: Crimson Vow — Edgar, Charmed Groom!

Edgar is back with a new version following his debut in Commander 2017 and this time he is missing red. 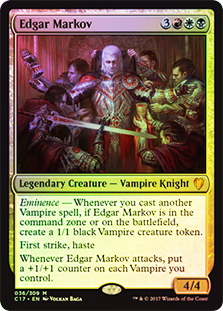 Edgar maintains his 4/4 stats but is now four mana and is quite difficult to keep down.

Edgar functions as a lord for your other Vampires and gets placed in his coffin when he dies.

Edgar Markov’s Coffin is a legendary artifact that not only makes Vampire tokens, but brings back Edgar from the grave.

Give it three turns and Edgar returns, pumping the tokens his coffin created. And if the opponent deals with Edgar a second time, start the process all over again.

What do you think of Edgar, Charmed Groom? Does he have the chops for Standard play or will he live on forever in Commander alongside his original card?