Courtesy of Wizards of the Coast (WotC) and Crokeyz, check out a new red one-drop that can do some wild stuff from Adventures in the Forgotten Realms — Minion of the Mighty!

Minion of the Mighty not only shows off a new flavor word from Adventures in the Forgotten Realms but also has players brewing up potential Turn-2 kills in Standard with this rare Kobold.

While it’s a one-mana creature with no power, it has menace and pack tactics. As long as you attack with six power, whether it be from Minion of the Mighty getting buffed or just with other creatures, you can put a Dragon from your hand onto the battlefield tapped and attacking. Players have already identified the Magical Christmas land scenario of playing Minion of the Mighty on the first turn, then pumping it with two copies of Infuriate on the second turn and attacking to gets it pack tactics ability, allowing you to put Terror of Mount Velus onto the battlefield attacking for a Turn 2 kill. 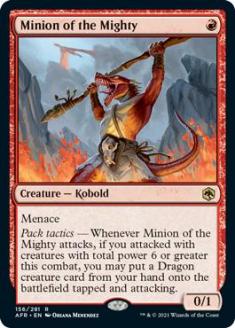 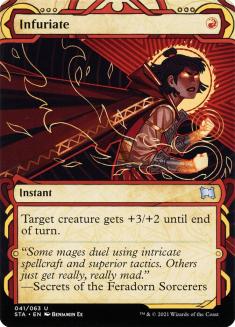 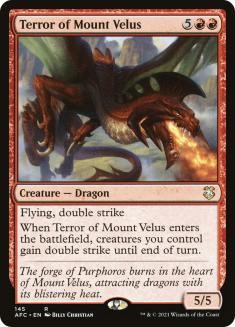 Of course, Minion of the Mighty could also have considerations in non-combo decks, but it looks like a prime target for auras and pump spells to cheat out large creatures.

What do you think of Minion of the Mighty? Is its combo potential overblown or will it be a menace in Standard?

Dungeons & Dragons: Adventures in the Forgotten Realms is scheduled for release on July 23. View our official preview gallery.