In my article a few weeks back highlighting The Top 5 Cards of Each Warhammer 40,000 Commander Deck, I mentioned that I have a Temur-sized hole in my collection of paper Commander decks. I’m actually pretty excited to build a deck around Magus Lucea Kane, so today I wanted to dig deep into making a cool X-spell “tribal” deck with Magus at the helm as commander. 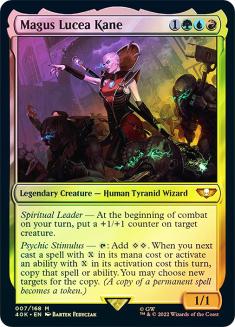 While Magus isn’t the “face” commander of the Tyranid Swarm precon Commander deck, there are a ton of goodies that we’d want in a Magus deck, so I’ll do my best to pick up at the very least the Tyranid Swarm deck for parts.  It doesn’t hurt that we’ve got brand-new art on all the reprints too!

Before we dig into cards we’d want in this deck, let’s review the card’s Release Notes:

Spells with additional costs that include {X} won’t be affected by Magus Lucea Kane. {X} must be in the spell’s mana cost.

A spell or ability with a cost that includes X, but not the mana symbol {X}, won’t be copied.

Magus Lucea Kane’s ability will copy any spell or activated ability whose mana cost or activation cost contains {X}, not just one with targets.

The copy will have the same targets as the spell or ability it’s copying unless you choose new ones. You may change any number of the targets, including all of them or none of them. If the spell is a permanent spell with targets, such as an Aura, you may also choose a new target for that spell. The new targets must be legal. If, for any target, you can’t choose a new legal target, then it remains unchanged (even if the current target is illegal).

The copy is created on the stack, so it’s not “cast” or “activated.” Creating the copy won’t cause abilities that trigger when a player casts a spell or activates an ability to trigger.

The copy will resolve before the original spell or ability does.

If the spell or ability that’s copied is modal (that is, it says “Choose one —” or the like), the copy will have the same mode or modes. You can’t choose different ones.

The copy has the same value of X.

If the spell or ability has damage divided as it was put onto the stack, the division can’t be changed, although the targets receiving that damage still can. The same is true of spells and abilities that distribute counters.

Any choices made when the spell or ability resolves won’t have been made yet when it’s copied. Any such choices will be made separately when the copy resolves.

The token that a resolving copy of a spell becomes isn’t said to have been “created.”

Wow, that’s a lot to digest. That being said, I think Magus works pretty much as you think it does. If a spell you cast or an ability you activate has X in its cost and you’ve tapped Magus for mana, you copy it.  If the spell is creating a permanent – like a creature – you’ll make a token copy.  Which sounds super-fun!  Let’s dig in.

First off, I wanted to take a look at the cool creatures with the ravenous mechanic. Past ravenous and ravenous-esque creatures typically have zero power and toughness and enter the battlefield with X +1/+1 counters, where X is what you paid in the X part of the casting cost, but if X is five or more, you get to draw a card when the creature enters the battlefield.

What’s awesome is that Magus taps to add two extra mana, making it quite easy to satisfy ravenous for most of those creatures, but you’ll get both the creature and the token copy with ravenous to enter the battlefield and draw you two cards. Having eleven creatures in the deck that will often double up and draw you two cards will keep this deck drawing gas throughout the game.  All the extra abilities on top of ravenous are just gravy.  I’m going to play all of these.

Beyond ravenous creatures are some other cards that synergize nice in an “X-spell”-focused deck.  Nexos turbocharges your basic lands for casting X-spells. Biophagus is an incredible mana creature for any creature-heavy Commander deck. It kicks things up a notch here by making it easier to reach that ravenous threshold.  The Swarmlord functions well in the 99 of the deck, paying you back in cards for most of your creatures when a sweeper deletes the battlefield.

Outside the Tyranid Swarm deck, Magic has a long and deep history of cool creatures with X in its mana cost. I’ve picked some of the best ones here, but I’m sure I’ve forgotten something sweet in the crush of likely candidates. In particular, I really love Stumpsquall Hydra since Magus is rather squishy as a 1/1 for four mana. If you cast Stumpsquall Hydra with Magus’s ability, you’ll be able to add quite a few +1/+1 counters to Magus to help get it out of small-ball damage range.

There’s a bunch of really cool noncreature X-spells in Temur’s colors I’m looking forward to putting in my deck.  Copying spells like Pest Infestation or Klauth’s Will with Magus sounds like some devastating battlefield control.  Or how about copying Mana Bloom, giving you two extra mana each turn to cast even bigger spells?

I can’t wait to really scour my boxes of cards looking for nifty abilities with X in the activation costs that I may be overlooking right now, but these are the ones that spring to mind.  Magus of the Candelabra will let you squeeze extra mana from your manabase.  How about cycling a big Shark Typhoon to get two cards and two flying Sharks?  Heck yeah!

The Mana Rig might be a bit too cute, but adding Magus’s two mana to four more mana to activate The Mana Rig where X is two will let you draw four cards, which sounds exactly like what I want to be doing with extra mana.

If we’re having so much fun copying one spell or ability each turn, why not copy it yet again?  Kiora, Behemoth Beckoner seems perfect here, especially if you’re using Magus mana to copy one of those tasty ravenous creatures.

I might try to squeeze in some new ways to discount spells that will get bigger values of X. Shadow in the Warp is another sweet addition from Warhammer 40,000 Commander, discounting the first spell you cast in a turn by two while also punishing each player for casting their first noncreature spell for two damage. Thryx, the Sudden Storm provides a one-mana discount on higher-cost spells and blanks counterspells.

Unbound Flourishing has been a boon to X-spell decks ever since Modern Horizons knocked on our door. Last year we got Elementalist’s Palette, which is a slam-dunk inclusion. I might even consider Raggadragga, Goreguts Boss for the deck—casting spells that cost seven mana or more should be relatively easy with Magus, so you could potentially untap Magus and give it +7/+7 and trample, and it even gets the static bonus from Raggadragga. That could be a victory from commander damage in the making!  Or more realistically, just crash in with a ravenous creature you’ve already cast.

While I don’t think it’s necessary to lean too hard into the +1/+1 counters matter theme, I think a few of them might be handy.  Hardened Scales and Inspiring Call are already in the Tyranid Swarm deck, so why not keep them around?  Herald of Secret Streams making most of our creatures unblockable is rather disgusting, but games gotta end at some point.  I might even find room for a Vorinclex, Monstrous Raider in the 99.

Kamigawa: Neon Dynasty brought a fair number of cards that care about “modified” creatures, and +1/+1 counters count. In particular, I’m going to jam Kodama of the West Tree, since giving a bunch of my large creatures trample and potentially ramping a bunch for even bigger spells the following turn sounds too good to pass up.

Tell me, what other cards are you excited to try out in your Magus Lucea Kane deck?  Are you going to pick up the whole Tyranid Swarm deck or just some key singles?