The early data is in and boy howdy, was I wrong.

A week ago today, I came in with the scalding hot take that Brokers were the worst family in Streets of New Capenna (SNC). Since then, 17Lands users have dominated with Bant decks to the tune of a 60% win rate. How are they running away with the format early and what can we do to beat them? Let’s look at the numbers.

Our Mythic Common For The Set Is…. 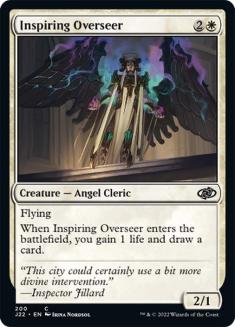 Folks, would you believe me if I told you that, based on Game In Hand Win Rate (GIH WR), Ob Nixilis, the Adversary is in a dead heat with Inspiring Overseer? The 2/1 common flyer that draws you a card is currently ninth overall, doing its best Organ Hoarder impression in the format’s most oppressive deck. As more data rolls in and people have a chance to play with mythics, this number will fall. But this tells me two crucial things about SNC: card advantage and evasion both matter more than usual.

Our Mythic Uncommon For The Set Is…. 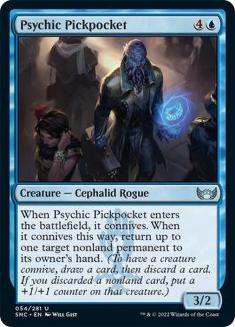 Whether you’re playing Best-of-One or Best-of-Three, Psychic Pickpocket is our top single color uncommon in the set. I’ll admit that, at first glance, I wasn’t blown away by Very Expensive Man-‘o-War. In SNC, however, you’re happy to do several things that are unique to the format: using connive, adding a counter to it, and then bouncing one of the myriad tokens that people are creating. No tokens on your opponent’s battlefield? Bouncing their most intimidating blocker at the top of your curve is never a bad play for a tempo deck.

An honorable mention goes to Disciplined Duelist, which is the true #1 in both Premier and Traditional Draft right now. In a vacuum, I’d prefer the Pickpocket to preserve flexibility, but the double striker is doing serious work in decks that are happy to buff the Duelist’s power. They’re happy to run Quick-Draw Dagger, For the Family, Majestic Metamorphosis, Backup Agent, Revelation of Power, or even a Raffine’s Guidance to make that 2/1 suddenly very intimidating and incredibly difficult to remove its shield counter. Don’t get me started on a Caldaia Strongarm the next turn.

We have a few cards in this archetype that thrive when we’ve earned an incidental counter, but they work best in more Azorius-based decks. Celestial Regulator is an absolute beating when it can tap something down for a full turn and then proceed to attack on its own. The aforementioned Revelation of Power can steal games, as I noted last week when talking about Illuminator Virtuoso. Metropolis Angel feels unfair when I’ve cast it, as you can start drawing the turn you cast it, not needing to venture into danger itself. At the bottom end, you have Backstreet Bruiser, which I think is a trap in even the heaviest of counter-themes. You’re much happier playing Raffine’s Informant or Backup Agent in this slot, with Civil Servant being the go to in Bant decks.

At one mana value, you’re loving Brokers Initiate in Citizen-focused decks but would rather have Hypnotic Grifter when conniving. Expendable Lackey is a fine card in either. Turn two, you’re happy with Sky Crier to pump up, Backup Agent to do the pumping, and Raffine’s Informant all the time. Hold for Ransom is also as good as we thought it would be. Three drops are abundant, but I seriously think people need to be picking up a Gathering Throng early in the event you can get to three or more. They’re really doing work. Rooftop Nuisance can help you reload your hand, as it’s easy to pay the casualty cost. And for Pete’s sake, stop passing Out of the Way. Giving people a card for doing what they want to do is how you lose games of Magic in 2022.

First, I think it’s critical that you don’t try to “out shield” them. Keep in mind that most of their tempo plays involve tapping or bouncing your creature, rendering your shield counters meaningless. Second, it’s very important to have instant-speed interaction to answer their tricks. Good players will see your Murder coming a mile away, but a Prizefight or Make Disappear can ruin their day. Third, their strategy involves really committing to the battlefield, so if I can start off with a Corpse Explosion, Hostile Takeover, or even nab a Night Clubber, I feel good about my odds.

At common, I keep taking Snooping Newsie higher as a way to keep your life total from getting too low while they bash early. Combine them with Deal Gone Bad as a way to dodge a shield counter while milling yourself to hit the critical number of mana values in your graveyard. With reach being in such short supply, consider cards like Wrecking Crew and High-Rise Sawjack a necessary evil for now. You can always Majesticly Metamorphize your own creatures and send them to the air, but the blowout potential makes me incredibly nervous. Your mileage may vary.

I love playing decks like this early in a format when everyone is still figuring out how to build each family correctly. It punishes slow play by constantly pushing forwards with attacks. It punishes people who are low information drafters with a series of tricks. And it punishes people that don’t build decks that can handle a variety of different lines of attack. If you’re the kind of Texas Hold ‘Em player that likes pushing your chips all in, Brokers might be your new favorite draft deck.