I hadn’t touched a card since Urza block when my buddy Cory rolled up to my house in a Kia Soul on a Saturday morning in 2014, bumping a set review podcast to get some last-minute intel. My backpack contained a pad of scratch paper, two random six-sided dice I pulled from board games, and a water bottle that would render several pieces of paper ruined from condensation. The crash course that took place over the ten-minute trip to our LGS confirmed removal was still good, mana burn no longer exists, and you should attack these new things called “planeswalkers.”

We were going to the Prerelease that would reignite my passion for Magic.

I’ve been lucky enough to compete in myriad events in my life, but nothing tops a Prerelease for me. Catching up with friends. The pulls. New pack smell everywhere. The hero collecting the discarded wrappers and throwing them away. “Can I have that token?” Mountain Dew in the morning. People yelling “Judge!” because neither person knows what they’re doing, rather than one person being extra. Only having to sleeve 40 cards. Losing to a twelve-year-old. It’s all there.

When the guy from my new Commander group that everyone now refers to as Old Jake started a group thread about Kamigawa: Neon Dynasty events this weekend, I couldn’t resist. I also remembered for all the above reasons it would be a perfect event for my buddy Andrew, who is new to in-person play outside of his preconstructed Commander deck getting pubstomped by some cEDH players. A few texts later, he sent me the following questions:

And the venue supplies lands?

I was catapulted back in time to the guy with the backpack full of soggy paper and mismatched dice, clueless on what was about to happen. If you’ve never been to a Prerelease, let me break down what the experience is like before you head out into Kamigawa this weekend.

What Even Is This?

A Prerelease is your first chance to play with the paper cards in person and happens roughly a week before everyone else gets their cards. You can, in reverse order of importance, take pictures with your new cards and post them for clout on the internet, swap out a proxy in a deck you’ve been dying to play since early preview season, and win packs.

Where Do I Go?

Wizards of the Coast (WotC) has a handy-dandy Locator that can help you find a shop in your area, but click on “Filter” to drill down to a Prerelease event. Times and prices will vary, but the latter is usually in the $25 to $30 range, depending on prize support. I always recommend picking up the phone and asking them how registration works. Pay in advance? Name on a list? Sacrifice several Goats? They’ll let you know.

No conversation about playing paper Magic in 2022 can ignore the virus in the room. Know what your local game store (LGS)’s COVID-19 policy is and pack accordingly, whether that’s having proof of vaccination, a negative test, or a mask. Regardless of your personal opinion, give them some grace: the last two years haven’t been ideal for small businesses where people gather.

You’ll want your typical accouterments: sleeves that don’t have your last draft deck in them, assorted counters, a playmat, and something dry to track your life total. Put all of these items in a larger vessel you won’t lose. Some stores use the MTG Companion app for check-in and pairings, so it never hurts to download it on your own Wi-Fi and save your precious data. They should supply lands, but feel free to pack up your favorite basics, whether they’re full art or white-bordered.

Most stores don’t have a short-order cook, so I try to eat a decent breakfast before and pack a nutritional snack. That sentence just aged me two years. Bring a water bottle that has a top, lest you Jokulhaups your table. Shower.

You’ll usually check in and exchange a pleasantry or two with a person at a counter, just like in the before times. A Prerelease pack will then be distributed, which contains six Kamigawa: Neon Dynasty (aka NEO) Draft Boosters, a foil promotional card, a deck box, and a spindown life counter. Do not open this pack until you have the express verbal consent of someone in charge. Instead, make more small talk or play a sixth of a game of Commander until everyone gets eerily quiet for the rules talk.

Yes, there is usually a presentation by the organizer/judge that explains the mechanics of the set. Ryan Saxe has an excellent breakdown of them if you’d like a head start, but they’re also printed on the cards. They will ask if you have any questions and, if you’re lucky, no one will say anything.

Okay, I Opened My Packs. Do I Just Shuffle Them Up?

Please don’t. I’m not going to delve into the intricacies of Sealed Deck as a Limited format, but here’s my general workflow:

This is the broadest advice possible, designed to give you the least amount of awful. The world won’t end if you have thirteen creatures and boatloads of removal, but it’ll be hard to win games with five creatures and a ton of ramp spells. It’s the reason we practice driving in parking lots, not on freeways, or why bananas are the demonstration object in health class. Stick to low-risk, low-variance strategies.

Okay, There’s a Stranger Sitting Across from Me Now?

That’s great! They’re here to play Magic. You can introduce yourself and wish them good luck. The nice thing about a Prerelease is that it’s the most casual level of rules enforcement, so shake off any nerves you may have. It’s okay to make mistakes here and there. 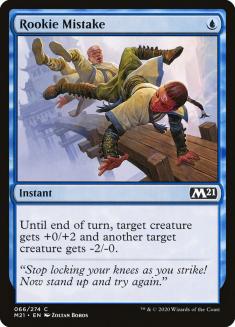 Things that aren’t chill mistakes: slipping extra cards into your hand, calling them anything I’d have to use asterisks for in this article, grabbing your opponent’s deck and making a run for it, barreling over several people in your dash for the exit. Don’t do any of those things.

You’re going to repeat that for a few more rounds, depending on how many people showed up. Count on being there for at least three to five hours, depending on if you’d like to yeet your deck into the sun or not.

If you’re not having fun, you can let the organizer know, at any time, that you’d like to drop. Don’t just slink out! They may offer you a prize pack just for showing up, and letting them know you’re out prevents your ghost from facing someone in the next round. More so, you should be proud you tried. I’m proud of you.

What If None of That Applies to Me Because I Live in the Middle of Nowhere or Can’t Risk Going Out in a Pandemic?

Thanks for hanging in there. A number of places are doing a “Prerelease at home” pack that lets you get together with friends/enemies to recreate the entire experience I outlined above in the safety of your own home. If the “Pre” part is less interesting to you, I’d recommend grabbing a booster box and doing a Sealed event on your own terms. To hell with me!

If being around humans really isn’t your thing right now, I get it. Spelltable offers a remote game experience that can be run without assistance from a Zoomer, although finding a Discord server with Prerelease hijinks can be more tech-challenging. These are the sorts of obstacles I’d have killed for in the late 1990s, for what it’s worth.

As much as I’ve loved drafting Innistrad: Double Feature lately, it can’t be 3 PM MDT on Friday quickly enough for me. If you decide to check out your first Prerelease, don’t hesitate to Tweet your pool at me. Have fun and play your bombs, which Andrew guessed meant “powerful cards.” He’s gonna do fine.