With the Arena Open coming up this weekend, understanding the details of Strixhaven Sealed Deck is more important than ever. Today, I’ll go over my experience with this Sealed format, which differs surprisingly little from the Draft format. In particular, I’m focusing on overarching themes to building the best deck possible. On Thursday I’ll use what I’ve discussed in this piece to build an exemplary pool.

I find Sealed to be quite difficult, as building a pool can have an overwhelming number of permutations. I find I need some heuristics to help me find the optimal build. In most Sealed formats, the first things you look at are your rares to try to find direction. Following that, each format has some other types of cards that are important to look at. In Strixhaven, that next level is your learn/Lesson package. In fact, the data suggests it’s arguably as important as your rares!

Because of this, the first deck I build almost always just plays the most rares and Lessons possible. This is often some multicolor pile, and more often than not, the deck I end up building is leaner with two distinct base colors and a light splash if needed. But I still find it useful to see the apex of power my pool can offer.

The second deck I build is the opposite: the fastest deck my pool has to offer. Basically, I aim to see the opposite ends of the spectrum that my pool can produce. This is unique to Strixhaven; I haven’t done this in other Limited formats. And the reason I find it so helpful in Strixhaven is because matchups can be particularly polarizing.

There are three ways to win in this format:

While you can make the argument that these types of decks exist in any Limited format, I find it particularly necessary to attach myself to one of the three categories in Strixhaven Limited. That’s why I find the best possible decks for Category 1 and Category 2 to start my exploration of a Sealed pool. I expect most pools will yield decks of either Category 2 or 3, but this way I don’t miss a great aggressive deck if I’m lucky enough to have one.

Strixhaven is a guild format, meaning it has five supported two-color archetypes. In Draft, an overwhelming majority of the time, it is correct to draft one of these five potential archetypes. In Strixhaven these are referred to as “colleges,” so I like to refer to the non-supported archetypes as “vocational school.”

One of the biggest differences between Sealed and Draft in this format is that, in Sealed, it is correct a significantly larger portion of the time to build an unsupported color pair.

I have seen all of these archetypes now, and have a good grip on what they tend to look like. The above thread describes this for Dimir (blue-black). It’s always a controlling deck and can basically never play the beatdown role. With this as the case, this color pair isn’t playable without rares in Sealed, as you won’t be able to go over the top of opponents with piles of commons like the trophy deck I drafted above.

All the other non-college color pairs fit the midrange category that needs to be flexible. Selesnya (green-white) is an aggressively leaning prowess deck in Draft, but in Sealed it will more likely look like a flexible midrange deck leaning on the color white for learn spells and flyers. Azorius (blue-white) is a flyers deck, and Rakdos (black-red) aims to learn a lot and play removal spells.

Only explore these options if they are where your density of rares and learn cards are. I know the previous section of this article already suggested looking at the color pair where that is the case, but it’s all too easy to dismiss non-college options because of their lack of gold cards. Don’t do that, as they can truly support some great Sealed decks.

As a last comment on these color pairs, they actually get access to four out of five of the common creature Lessons, where the supported colleges only have access to three out of five. It’s a nice little boost to the learn/Lesson package, which is correlated with winning.

I’ve heard some say that, because learn/Lesson provides a density of common card advantage, this becomes a less important part of the format. While that has merits, it also has faults. It’s quite difficult to be aggressive in this Sealed format. I would love an aggressive Sealed pool if it’s given to me, but more often than not, you must fight card advantage with card advantage of your own. It boils down to the type of card advantage. Discard, in my opinion, manifests differently from card draw.

I have found Mind Rot effects like Go Blank to be solid in this Sealed format. However, I have found them to be worse than usual because they have much less impact when cast early. Generally, Mind Rot is better in Sealed because simply spending three mana to go up on raw cards is a good exchange. In this format, so many commons provide raw cards that the advantage a Mind Rot effect provides isn’t so potent. Then again, learn/Lesson does make Mind Rot less likely to be a dead topdeck, so it gains some stock. 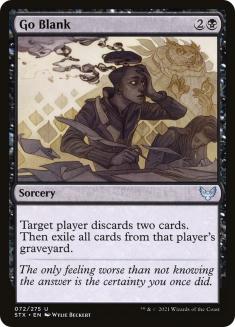 Overall, I think non-assertive decks should play most copies of two-for-ones that they can, including Mind Rot effects. But I think the dynamics of learn/Lesson providing enough other mechanisms for card advantage makes it less of a guaranteed inclusion.

As a final note, I have found targeted discard to be particularly backbreaking in Sealed. With Lessons, it’s pretty easy to know exactly when the right turn to cast Duress is, and it rarely misses. I would play two copies in the majority of my black decks.

This question really hammers it home. I haven’t found synergy to be particularly important in this Draft format. Blood Researcher doesn’t get me to draft Witherbloom, and Quintorius, Field Historian doesn’t get me to draft Lorehold. I draft them when they are so open that my card quality and mechanisms for card advantage, will squash my opponents. The only difference between Sealed and Draft here is that a Sealed pool is less likely to yield a highly synergistic deck than the open Draft archetype.

I just don’t find synergy important in either, but you are even less likely to get a good synergistic deck in Sealed. My main takeaway preparing for writing Sealed content is that this format is all about card advantage. Nothing else matters. Aggressive decks are great because when everybody is trying to draw cards, attacking is really just a form of card advantage. If my opponent dies with five cards in their hand, I basically drew five cards!

Good luck in the Arena Open this weekend. I hope you open as many cards that give you card advantage as possible, and if not, turn ’em sideways!