Each week I’m going to take an in-depth look at a single Adventures in the Forgotten Realms Commander preconstructed to see if it’s worth buying simply to acquire the parts rather than buying the singles individually. The past weeks I took a look at Dungeons of Death, the Esper deck focused on venturing into the dungeon, and Draconic Rage, a Gruul beatdown deck that has a pretty heavy Dragon theme running in it.  If you haven’t read them yet, be sure to stop in and take a look.

This week I’m going to do a deep dive into the cards in Planar Portal, the Rakdos deck that leverages advantages from casting spells from exile.  If you’re interested in keeping Planar Portal mostly intact and are just looking for ways to upgrade it, be sure to check out this video by StarCityGames.com’s own Jeremy Noell and Jonathan Suarez:

I’d like to say bravo to the designers of all the Commander decks on their manabases. Three of the four decks have 39 lands, and the other has 38 lands, and the lands include solid Tier 2 dual lands like Foreboding Ruins and Smoldering Marsh. Not a Guildgate or a Temple of the False God in sight!

This deck’s total non-bulk value currently isn’t all that much higher than the cost of the individual singles. Unless you find that you want every one of the cards on the list below, it’s likely best that you try to order the singles that you want if you’re not interested in simply playing this deck out of the box or upgrading it. 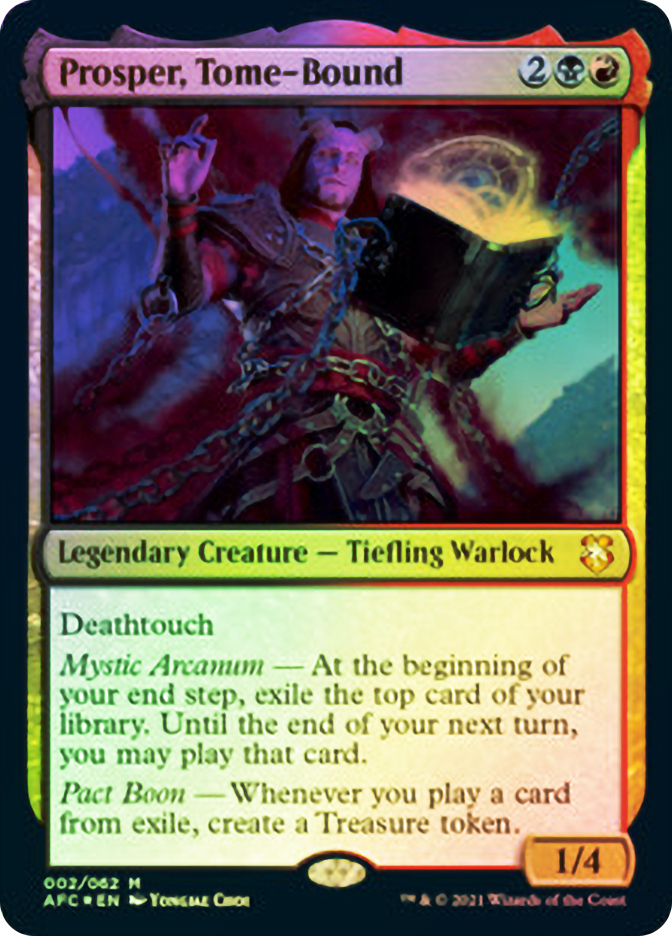 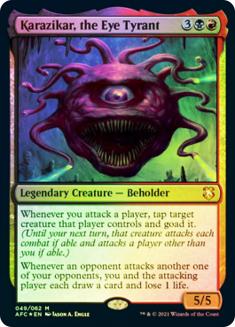 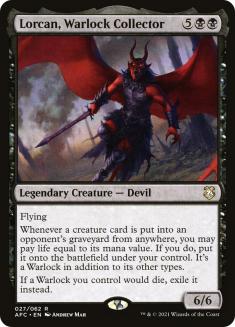 I have to say I’m not overly excited about the face commander for this deck, Prosper, Tome-Bound. His Mystic Arcanum ability can backfire if you cast Prosper on-curve and you end up exiling a powerful card that you can’t cast on your next turn and lose it forever. For instance, in the Planar Portal deck, imagine you exile Etali, Primal Storm and can’t cast it.

This leads me to think it might be better if you hold off casting Prosper until you have enough mana to cast whatever might get exiled, which just feels odd.  Prosper might be better in the 99 of some other deck, maybe with a bunch of foretell cards. I will readily admit cards that create Treasures tend to play stronger than they appear, so I’m probably wrong about this one.

On the other side of the coin, I simply love Karazikar, the Eye Tyrant!  First, let me just say that artwork totally captures the scary nature of the Beholder creatures ripped straight from the pages of Dungeons & Dragons. But as a Magic card, it’s got a ton of great things going on for Commander, in addition to a 5/5 body for five mana. Its first ability “has haste” and can be used immediately after you cast Karazikar if you have any creatures that can attack that turn. Also, if you attack multiple opponents, you get to tap and goad a creature for each player you attack. If you’ve got ways to get multiple attacks this ability gets even wilder—think Aggravated Assault, Combat Celebrant, and Savage Beating.

The goad ability feeds directly into the second ability, which triggers whenever an opponent attacks another one of your opponents: you and the attacking player each draw a card and lose a life. Drawing extra cards is awesome, especially if you’ve been able to goad each of your opponents!  Just make sure you’re able to offset that life loss with some lifelink or life-draining cards.

While I think Karazikar would make a great Rakdos commander, I also think it makes a fantastic addition to the 99 of other Commander decks too. I quickly found room for it in my Saskia the Unyielding and Thantis, the Warweaver decks.  Saskia loves to tap down blockers and Thantis loves the goad.

Then there’s Lorcan, Warlock Collector, which costs a whopping seven mana! If you have access to cards like Cabal Coffers, Nirkana Revenant, Crypt Ghast, and Magus of the Coffers, that sort of mana shouldn’t be too difficult to scare up. Being able to reanimate opponents’ dead creatures for no mana is quite powerful, and black has a lot of ways to recoup the life loss.  There are even cards that benefit from losing life, such as Font of Agonies and Vilis, Broker of Blood.

Lorcan’s ability triggers whenever a creature hits their graveyard no matter what zone it’s coming from. So, in addition to the usual occurrence of dying on the battlefield, it will trigger off a creature card being discarded or milled from the library. Cards like Altar of the Brood, Altar of Dementia, Syphon Mind, and The Eldest Reborn get super-interesting with Lorcan on the battlefield.

A few of these new cards play into the theme of playing cards from exile. Wild-Magic Sorcerer leaps out here with its ability that the first spell you cast from exile each turn has cascade. Note that this will work on another player’s turn too! If you have a Commander deck built around Jhoira of the Ghitu; Grenzo, Havoc Raiser; Jeleva, Nephalia’s Scourge; or Etali, Primal Storm, you should definitely make room for trying out Wild-Mage Sorcerer.

Fevered Suspicion is expensive but packs quite a punch, potentially casting three nonland spells from exile, and then going into exile itself to cast again next turn with rebound. That’s a lot of value and I could see this being played even outside of the theme of playing cards from exile in decks that can produce a lot of mana regularly.

Share the Spoils is another one but is much cheaper to cast and as an enchantment could potentially be sacrificed and returned to the battlefield to reset it. Chaos players will certainly love what this card does.

Then there’s Hurl Through Hell, which is a really nifty instant removal spell.  Four mana is a lot for pinpoint removal but having the option to cast the creature from exile under your own control makes it quite flexible. Within the theme of playing cards from exile this is a slam dunk, but I could see it working its way into other decks too, particularly Rakdos decks that could potentially dip into creatures outside its normal reach—imagine exiling a Sun Titan, Notion Thief, or Seedborn Muse.

Grim Hireling obviously supports Treasure token themes and would slot right into Prosper, Tome-Bound or Kalain, Reclusive Painter Commander decks. But it’s also quite amazing in a deck that does a lot of attacking.  Note that Grim Hireling will give you two Treasure tokens for each opponent you deal combat damage to, so you could potentially nab six Treasure tokens each combat! Pair it up with Xorn, Marionette Master, and Revel in Riches!

Death Tyrant is an intriguing card. For just one black mana and four generic mana it fits easily in any deck that can generate a black mana. A 4/6 creature with menace that can bring itself back from the graveyard is already in the realm of playable. So, does its Negative Energy Cone ability take it over the top?

The ability is narrow and requires you to have attacking creatures that die during combat and/or your opponent having blocking creatures die during combat to generate Zombie tokens. It can potentially do some work in decks like Breena, the Demagogue that can encourage opponents to attack each other, or a goad deck such as Karazikar, the Eye Tyrant where you can hope that blockers will be dying.

All that being said, I think the way to leverage this card better is to have ways to sacrifice your own attacking creatures whether or not they’re going to die in combat. I’m thinking cards like Viscera Seer; Priest of Forgotten Gods; Woe Strider; Krav, the Unredeemed; Plumb the Forbidden; and Ghoulcaller Gisa. Death Tyrant is a Skeleton, so if you’re playing Skeleton Swarming, Death-Priest of Myrkul, and Death Baron, you should probably find room for it too.

As the president of the Brash Taunter Fan Club, I love to see a card like Fiendlash see print. At first glance it looks like another version of Blazing Sunsteel, but instead of pushing damage dealt back at an opponent, instead it deals damage equal to the equipped creature’s power back to an opponent or planeswalker whenever it is dealt damage. Imagine equipping this to a Blightsteel Colossus, ouch! I slotted this card immediately into my Bruenor Battlehammer deck and might try to find room for it in my Valduk, Keeper of the Flame deck.

Hellish Rebuke can make for a pretty nasty surprise if some is dishing damage to you from multiple sources. Even if you’re dying from the alpha strike, you can make them pay if you’re feeling vindictive. Three mana is costly to hold up, so unless you can shave the mana cost with something like Jet Medallion, or have other mana sinks you use in case you don’t need to cast it, I’d hesitate to put it in your deck.

I don’t think that Reckless Endeavor, Danse Macabre, Bag of Devouring, Bucknard’s Everfull Purse, and Underdark Rift are worth playing outside of dice-rolling decks where you can get some extra value from the cards. Ebony Fly might be surprisingly decent even outside dice-rolling decks; nongreen decks appreciate a two-mana rock, though green decks might appreciate the ability to give one of your monsters flying when you activate and attack with the artifact Insect.

The deck has some great reprints, with Disrupt Decorum being a popular and powerful Commander card that had really crept up in price – pushing up to $20 – before showing up here. Vandalblast is an uncommon card that’s awesome and pushed north of $5 on occasion so it’s super nice to get more supply out there. Sol Ring, Arcane Signet, Fellwar Stone, Talisman of Indulgence, and Bojuka Bog are format staples, and any Commander collection can always use more of these.

So, what do you think, will you be buying Planar Portal for parts or just investing in some singles?  Which of the new cards and legends are you excited to try out, and in what decks?