One of the best things about doing this column is that the framework allows me to take as broad or as narrow a view of the week’s event as I want. While my preferred approach is to highlight the under-the-radar archetypes developing before our eyes, there are also opportunities to explore broader metagame trends and look at individual deck building decisions.

This week’s SCG Tour Online was tame in terms of outright new archetypes. But come Sunday’s Top 12 action, something special started to come to fruition. For the first time in a long time, things appear to be well and truly balanced. There were nine mostly distinct archetypes, a completely new deck, and a diverse set of ways to approach a match of Magic. Even more important than their archetype decisions, the individual card selections of the players that succeeded reflected an adaptability inherent in the metagame that many, including myself, would have thought impossible just a few weeks ago.

It’s time to eat some crow. This is a solid Standard format, and Sunday’s Top 12 deserves some in-depth analysis. I expect that we are only at the beginning of this Standard metagame, and there’s plenty meat on the bone to keep us metagame analysts well-fed up until rotation in about six (!) short weeks.

So much of the churn this week was derived from removal choices. Where last week, Burning Hands was the go-to removal spell, Redcap Melee and Crippling Fear felt like the big players this go around. Enter Mono-Green Aggro, along with the premier expert on the archetype (sorry Cedric!), Kenton Stalder, aka Rumti. Rumti has been dominating the tippy-top of the Arena ladder with this archetype for so long, it’s fitting that the moment people’s guards were let down Rumti busted through the door.

Given the reps Rumti has here, I would take every decision he made in deck construction very seriously, and that includes the decision to play fewer copies of Ranger Class and Werewolf Pack Leader. Nobody is questioning that these cards are great, but Rumti used those slots to squeeze more removal into his deck, and given the prevalence of Naya Winota in this tournament, he did so correctly. I particularly like the inclusion of Ram Through, with instant-speed interaction being more important than ever given the explosiveness of Winota, Joiner of Forces.

Also targeting Naya Winota are the Weathered Runestones hanging out in the sideboard, and Rumti is the first person I’ve seen go this far. Again, I think it was absolutely correct to do so. Naya Winota is an incredibly powerful deck, but I don’t believe it will wear the target particularly well. In Sunday’s competition, 42 players (27%) registered the archetype, but only two made Top 12, and the deck’s overall win percentage was a lackluster 48%. I don’t think Winota is over and done with at this point; it just needs to not be the absolute focal point of the metagame. Of course, even in that role it still just barely missed raising the trophy.

Naya Winota made its own shifts this week, mostly in terms of removal for the mirror and a few more copies of Kenrith, the Returned King to serve as a Winota hit. Kenrith is a big deal when the format is shifting to Redcap Melee as the anti Winota spell of choice. However, you can see that Tatsuaki Yajima (aka ryuumei) was absolutely cold to Rumti’s Weathered Runestones in the finals. You can’t account for everything, but in the coming weeks, I think Masked Vandal will merit some consideration, especially for open-decklist play.

Beyond that, Winota pilots should probably just bide their time. The deck is too consistent and too strong to be completely squeezed out of the format, and with as diverse a metagame as contained in this Top 12, sideboard slots are going to get used up quickly.

Rivals League competitor Noriyuki Mori has had a dominant run on the SCG Tour Online and this go-around put up another strong finish, this time with a deck completely off the beaten path. Last week I summarized that the absence of traditional format standbys like Dimir Rogues (Lurrus) and Sultai Ultimatum (Yorion) had the potential to open space for some weird stuff, but I certainly had nothing like this in mind.

This is a wonderful example of a metagame-targeting deck. At a moment where red removal is at its apex, you go all in on it and find the best end-game from there. Midnight Clock and Kiora Bests the Sea God go bigger than basically anything else in the format besides Emergent Ultimatum. Meanwhile, you get to be the only good Cinderclasm deck in the format, and boy is that card a beating for Winota. I don’t know that this deck can really have long-term legs, but in the hands of a masterful player who had a clear gameplan for this event, I’m not surprised to see it put up a strong result.

Again, much of the decision-making process here boils down to removal. The haymaker of Emergent Ultimatum often feels a turn too slow in the present format, and that means you need ways to keep battlefields in check for a longer period of time. Enter the criminally underplayed Kaervek, the Spiteful and an almost laughable amount of spot removal and sweepers. Shadows’ Verdict; Extinction Event; Heartless Act; Binding the Old Gods; Erebos’s Intervention; Polukranos, Unchained; Essence Scatter; Power Word Kill; Flunk; and Murderous Rider… this deck wants to get creatures dead.

The finisher of choice here is Lochmere Serpent, and while I like Kiora Bests the Sea God more in a vacuum, in this deck that always wants to hold open mana a genuine flash threat is probably the way to go, especially since you will still have to battle some adherents to the old ways of Sultai Ultimatum. Also, six is less than seven. Sometimes the simplest answer is the correct one. If the metagame remains creature-focused, it’s easy to see the appeal of a deck that just kills everything with ruthless efficiency.

This take on Mono-White Aggro first popped up on my radar when Grzegorz Kowalski (@urlichmtg) got hyped about it last week after posting a ludicrous 93% win rate over 30 matches. I love decks that have split gameplans, and I’m also still a huge believer in the staying power of The Book of Exalted Deeds. In fact, most of my own Standard games over the past two weeks have been spent tuning a midrange version of Mono-White Book.

As we move away from Emergent Ultimatum-defined endgames, approaches like this become more and more realistic. I’m not here to sell you on my version of Book over the more aggressive take of Laurent Delade / Daftendirekt. I just want to put you on notice that you should be taking The Book of Exalted Deeds plus Faceless Haven seriously.

The demise of Dimir Rogues (Lurrus) was definitely exaggerated. While one of its prime targets in Sultai Ultimatum (Yorion) might be on the decline, rebuilt versions of Rogues chose to put the uber-popular Naya Winota decks in their sights. Ray of Enfeeblement, Power Word Kill, and Crippling Fear all reside soundly in the maindeck now, and the matchup against Winota felt extremely favorable in my testing. Hive of the Eye Tyrant and Hall of Storm Giants have also proven to be welcome additions to the archetype, and no one is ever going to question the efficiency of the Rogues / Into the Story core that has terrorized Standard for months now.

In every metagame since its release, Dimir Rogues (Lurrus) has had its moment where it felt dominant, before targeted hate brings it back down to earth. For Adventures in the Forgotten Realms Standard, I think that moment is right now.

What is there to say at this point about Kosuke Nakamoto’s / Atelier’s love for Dimir Control (Yorion). A regular in this column, they’ve been playing this deck for ages now and continue to crush every event with it. Meanwhile, everyone else flounders when you put the archetype in their hands.

It’s wild how much of the base here aligns with Chase Masters’s Sultai Control (Yorion) deck. It’s the same all-removal / Kaervek, the Spiteful / Lochmere Serpent core. For my money, I think Sultai just gets more options at extremely little cost to your manabase, but for Atelier, why change what very obviously works? Keep doing you and carrying the torch for the Dimir mages.

I highlight this final deck for the sheer fact that I can’t really come up with any good reason why Rakdos Sacrifice should work right now. It doesn’t seem like it has any hard targets in the metagame, and probably just has a bunch of close or losing matchups. But that’s the beauty of a wide-open Standard. If your baseline gameplan is powerful enough, you can exploit the lack of any focus on your archetype and let yourself play a bunch of 50/50 matchups in Game 1s, and then look to find a definitive edge with your sideboarding advantage in Games 2 and 3. After all, who has sideboard cards that are targeting Rakdos Sacrifice at this point? What would those cards even be? 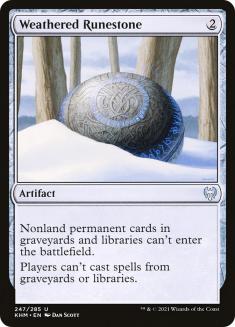 I don’t have any real reason to sell you on the quality of Standard right now. We’re coming to the end of its cycle, and I’ve certainly said my piece about the downs caused by two years of format oppression under Throne of Eldraine. Things have changed though. Seriously, this is Standard working as designed.

It’s okay if there are things about the play patterns here you don’t love—I share a lot of the same concerns. But in terms of a rotating metagame with lots of ground to cover for both deckbuilders and tuners, Adventures in the Forgotten Realms has delivered a nice surprise.