If you can’t beat ‘em, make like Winota and join ‘em.

After spending my early days of Adventures in the Forgotten Realms trying to figure out the antidote for the most robust deck in the format, now it feels like I’ve been Princess Bride-ing myself and slowly ingesting the poison that is Rakdos.

The last thirteen Quick Drafts I’ve done? All base Rakdos. It’s not even a tough decision to make when the best cards in the deck wheel. We’re not talking about underrated commons here, but rather the cogs that make it work. Again, when you can always guarantee you’ll make playables, you have a bevy of options at the beginning of the draft.

Consider scenarios in which you don’t end up in Rakdos. An absolute 5.0 bomb like Xanathar, Guild Kingpin? Or a rare like Skeletal Swarming that feels truly at home in Golgari? Splash them. Hell, splash them both and go 7-0.

As I file this, the deck has an absurd 59.8% win rate while being responsible for almost 43% of all wins in the format. Selesnya, my pick last week for your best answer to it, has a respectable 57% win rate. Yet, I still wouldn’t draft it. Why not?

Because the best answer to Rakdos is Rakdos. Steal their sacrifice outlets first, respond to their Price of Loyalty by eating the target, and beat them at their own game.

You are the beatdown. When you’re unsure which card to include, ask if it deals damage or removes a threat. In the case of a tie, which deals more damage? Do that.

This deck establishes an early battlefield presence with one- and two-drops, pressuring the opponent until you can ramp into a threat using Treasure you’ve accrued. Alternately, you remove a key blocker with Price of Loyalty and swing for lethal damage. A lot of times, you’re doing both. 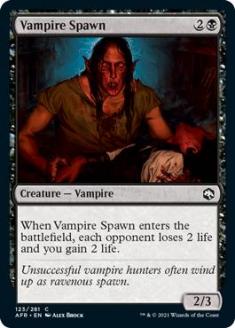 People kept trying to tell me that Vampire Spawn was a viable aggressive creature, and I felt like Kanye standing in the middle of Mercedes-Benz Stadium. However, casting it led to a much different opinion. First, getting a drain when it enters the battlefield actually matters, as there’s much less value in stealing it for opposing Rakdos decks. Second, it’s decently statted in this set, something I wasn’t expecting to say of a three-mana 2/3. Last, the data loves Spawn, giving it better marks across the board than cards like Dragon’s Fire and fellow three-drop Plundering Barbarian. 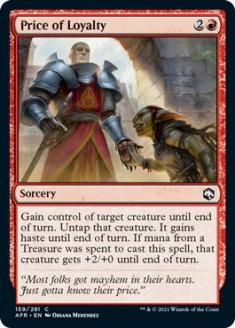 The absolute linchpin of this deck is Price of Loyalty. Rakdos has the easiest time producing Treasure tokens, which you’ll gladly use in exchange for an added two points of power to whatever you steal. That can be the difference between needing a sacrifice outlet post-combat and outright winning the game. For the red common that rates highest in Win Rate Improvement When Drawn (IWD), there’s bonus flavor that it’s a steal on the wheel.

I’ve heard rumblings about Shambling Ghast not being that great, and I want to assure you those people are dead wrong here. I don’t think you’ve built a proper Rakdos deck in Adventures in the Forgotten Realms without at least one to two of these, with a pair of 7-1 decks running a full playset. What you love is how many different lines this enables you to pursue. Sacrifice it to Deadly Dispute to creature two Treasures and draw two, enabling ramp strategies. Or make one Treasure and win a combat out of nowhere. Slap a Reaper’s Talisman on it and go HAM. Pick off any X/1 your opponent has on the battlefield. It’s extremely versatile and incredibly loud.

One of your core four sacrifice cards. I find myself happy playing as many Deadly Disputes as I can get my hands on. Fortunately, they nearly always wheel so that number can get absurd. In a Rakdos-dominated format, the player with the most sacrifice outlets wins. Being able to respond to a Price of Loyalty at instant speed is a requirement in the format, and Sepulcher Ghoul (ATA 6.29) doesn’t always hack it. They will attempt to steal your Ghoul. It’s their priority. 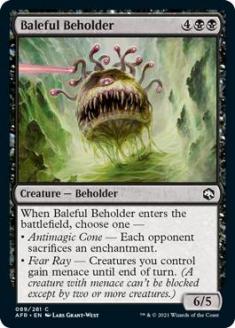 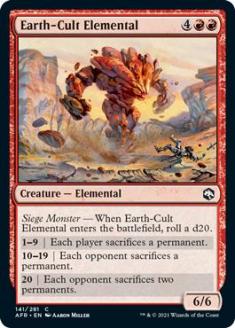 People’s biggest mistake with this deck is to go too low to the ground and not take advantage of the ramp potential. Remember: this deck generates more Treasures than Studio Ghibli. Being able to cast Earth-Cult Elemental on Turn 4 —a feat that’s easier to achieve than you’d think — can leave your opponent down a land and struggling to answer the 6/6 body that just showed up. Baleful Beholder taking out their recently leveled-up Class is demoralizing. When you think of these creatures as pseudo-five-drops, they look imposing as hell.

You’ll notice that the wheel cards do not appear in this list. While I think you should draft them, I also know that people will skip the article and go straight to the pick order.

The key to beating the bots isn’t to blindly follow a pick order. Instead, you amass value by letting key cards go undrafted initially so you can pick them up later, getting a free card in the process. You also need to guide the bots. Take this pack, for example:

Swarming Goblins is a strong play in this deck that generates you extra creatures to sacrifice and rates much better than its ATA of 6.50 would indicate. You’re never not playing it, but you’re also usually fine in terms of nabbing a top-end threat, so I think it’s safe to eliminate it.

Plundering Barbarian shows better in this current Quick Draft meta than I think it gets credit for, as picking off a Reaper’s Talisman or the occasional Treasure feels great, while you’re always game to create your own. With an ATA of 7.49, you will find one.

That takes us to the Hobgoblin Captain, which I’ve found to be awful with so many Shambling Ghasts running around. Still, an opening hand win rate of 62% is nothing to laugh at. That said, Vampire Spawn isn’t close behind at 61.1% and has the benefit of being the only black card in the pack.

No, we’re not worried about signaling to the bots. What we know is that it’s rare they’ll have three bots that want mid-tier red cards over any other card in that pair. I think Vampire Spawn is the correct pick because it means we’ll get one of these three red cards back, and that’s how to beat the bots.

As such, I would probably slot in Price of Loyalty, Shambling Ghast, and Deadly Dispute after Ray of Enfeeblement from Pick 6 on. Starting with your sixth pick, you’re no longer guaranteed a card wheeling. You must draft accordingly; this means paying attention to what you’ve already seen in Picks 1-5 and drafting based on need.

I’m also not rating rares. They’re almost all delicious, and you’re happy to play them, although they’re not necessary to make this work. Keep in mind that you should always be splashing single-pipped bombs (including Adult Gold Dragon and Triumphant Adventurer) and can make accommodations for Mordenkainen or Grand Master of Flowers by including more Treasure generators and Unexpected Windfall.

Battle Cry Goblin is your best two-drop by a mile and represents a finisher in and of itself, as a great mana sink for Treasures. Reaper’s Talisman is a mythic uncommon and gives you inevitability. I’m Team Black over Red when it comes to Dragons right now. Tiger-Tribe Hunter and Skullport Merchant are essential ways to sacrifice creatures and must be valued highly if you’re not seeing Sepulcher Ghouls and Deadly Disputes. Finally, I may be too low on Chaos Channeler, as it rates incredibly well right now in this deck.

In terms of traps, I’m incredibly down on one-toughness creatures right now, and my ratings of Hobgoblin Captain, Lightfoot Rogue, Dungeon Crawler, and Rust Monster reflect that. They combine with this format as well as Jagermeister and chowder do, as they’re easily picked off at a net gain for your opponent. With the removal Rakdos has access to, I think Farideh’s Fireball is far too expensive. Broadly, venture is not a mechanic this deck cares much about. Anything that’s not ranked? Definitely don’t play it.

No one should be surprised that the bots are tragically undervaluing the best color combination in Adventures in the Forgotten Realms, especially considering how often they whiff on Rakdos. Remember, though, that there’s only so long we have to abuse them. Make sure you have an even split of steal effects and sacrifice effects and farm to your heart’s content.