Okay, so the title of this article is a bit of hyperbole, but the general premise holds: aggressive decks are good and the synergy decks are not.

I have lost a lot at this format. The pattern I recognized, outside of when I run bad, is that I continually lose to my opponent playing above-rate creatures and rarely lose to my opponent assembling synergy. Furthermore, whenever I build decks that seem synergistic, even if it looks like I have all the pieces, when I draw them all, it just doesn’t deliver a boost much ahead of casting good-rate creatures. So there just isn’t incentive to draft a deck that will sometimes be inconsistent when the reward doesn’t win you the game.

I spent twenty drafts trying to make synergy work. I really tried my best, but it just doesn’t. All my decks that are just good rate creatures and removal win, and my decks that are trying to build around a mechanic like die-rolling lose. This doesn’t mean you can’t have synergies in your deck; it just means you can’t build your entire deck around them. Don’t put Brazen Dwarf in your deck. Instead, look for pockets of synergy. Two generally good cards that interact well together. Any two-drop is good for an aggressive deck and so are Equipment. Pairing Armory Veteran with Dueling Rapier is a recipe for success, and both cards stand well on their own. 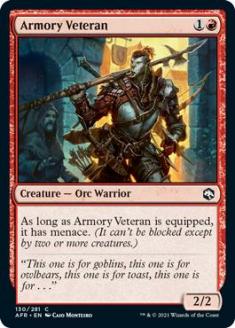 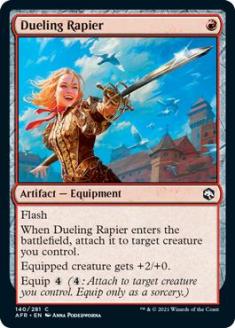 Because of this, aggressive decks shine. Anybody trying to do something sweet just isn’t going to get the type of payoff that stops curving out in its tracks. Dragon’s Fire is the best common, but when I tell you Hobgoblin Captain is not far behind, I mean it. I haven’t figured out Izzet Aggro yet, but here’s how the others work:

Now, with all of this in mind, how would you approach the following draft?

Hobgoblin Bandit Lord may look unplayable, but there are a surprising number of Goblins at common. It combos particularly well with Swarming Goblins, which are pretty easy to pick up. Overall, I decided not to take it because most red decks aren’t built to take advantage of it, but I wouldn’t fault anybody for taking this, especially early in the format for science.

I think Djinni Windseer is much better than Wizard Class. It’s a cool idea to draw cards and then spend five mana to gain inevitability in the long game, but nobody has time for that. Just play good-rate creatures that affect the battlefield and kill your opponent. I know last time we saw Phantom Monster with the set mechanic it underperformed (Augury Raven), but that’s because Kaldheim was an extremely synergistic set that didn’t care so much about playing good-rate flyers. Adventures in the Forgotten Realms is the opposite.

Prosperous Innkeeper is a fantastic card and currently underrated. Soul Warden isn’t a great Limited card, but throw a Treasure token alongside it and it becomes well worth it. Playing a Hill Giant Herdgorger or Owlbear above curve can completely take over a game, and this card provides a nice padding from the aggro decks as well as a body to block one-toughness creatures. It also supports lifegain synergies if your deck is suited to take advantage of that. It does a lot and it’s first pickable. I think it’s really head-to-head between Prosperous Innkeeper and Priest of Ancient Lore.

Priest of the Ancient Lore is the best white common. Yes, above Minimus Containment. Priest just does everything. Like Prosperous Innkeeper, the life-padding and body help against aggressive decks. But for one more mana, a Treasure becomes a card, and the body can actually trade for many of the two- or three-drop creatures. It also holds Equipment in the aggressive decks, so even Boros is ecstatic to play the card. I take Priest very highly and you should too, as it’s in my Top 5 commons (below Dragon’s Fire and Grim Bounty). But is it better than Prosperous Innkeeper?

The Innkeeper is a much better enabler for Selesnya Lifegain while maintaining a good rate for the cost. Out of most packs, this would be head-to-head and go either way. However, Priest is the only white card, allowing the “send a strong signal” to come in as a tie-breaker and lead me to take the white common. I get to tell the person sitting to my left “I took a white common” and that’s enough to sway me in that direction.

You may look at this pack confused at why it would be anything other than Moon-Blessed Cleric. It looks like I’m extremely likely to be Boros, and I already have a Minimus Containment to find with the Cleric. However, I don’t actually like the card much at all in Boros. I would much rather have three-drops that provide card advantage like Priest of Ancient Lore or three-drops that provide immediate impact like Valor Singer (and I’ll prefer a lot of two-drops over most three-drops anyways).

Because of this, I don’t even think Moon-Blessed Cleric has a guarantee to make my deck. It’s fine to tutor for a removal spell but it’s not actually as exciting as it sounds. It’s not embarrassing to take here but I would take Steadfast Paladin, Hobgoblin Captain, or even Armory Veteran here if they were in the pack.

Given that there’s nothing that’s great in my deck, I chose to speculate. Remember Pack 1, Pick 1? There were two green uncommons, Druid Class and Prosperous Inkeeper, that work really well in the lifegain deck. If I wheel either of them, and red looks like it’s closed, then Lurking Roper might end up being one of the best cards in my deck. I know I said that synergy decks aren’t good, and they aren’t, but Lurking Roper is just a good card.

For its rate, it’s an insane blocker, and even getting in just twice is worth three mana. This may look like I’m not following my own advice, but I actually am. I’m taking the card that’s best on rate and opening the door to be able to have micro-synergistic support for that card. This format is about playing good cards that make each other better. To me, Moon-Blessed Cleric is a mediocre card that makes my removal spell a bit better, but Lurking Roper is a great creature that makes my already-great creatures like Steadfast Paladin and Priest of Ancient Lore better. That’s where I want to be!

The straightforward pick is Iron Golem, as it’s a solid four-drop that can make any deck. Underdark Basilisk and Elturgard Ranger are filler cards for Selesnya. While looking at this pack, you may make you think red is closed and green is open. But, again, I encourage you to go look back at Pack 1, Pick 1. A majority of cards from every color have been taken and it was just a mediocre pack. This doesn’t mean green is open. In fact, two green cards that go really well with white cards are missing. From this, I basically think the correct thing to do is evaluate if it’s possible I could be blue. If it is, I should speculate on Contact the Other Plane, as it’s the best card in this pack. If not, I should just take Iron Golem.

In the end I decided to take Contact. I think it pairs well with either my white cards or my red cards, and if blue turns out to flow, I’ll be very happy I took it. I also just think I wouldn’t miss the Golem if I end up in Boros anyway, which is the most likely scenario.

And, I was right! I ended up in a fantastic Boros deck, and if I had taken Iron Golem here, it would have ended up in my sideboard.