Everybody is talking about the multicolor good-stuff decks in Modern Horizons 2 Draft. That’s not really surprising, as I think most of the Magic community prefers to durdle instead of attack. And those multicolor decks are quite strong; I’ve played them many times myself.

However, the aggro decks are extremely fast in this format. Selesnya and Boros intersect at the counters theme because Boros is a modular deck and Selesnya is a proliferate deck. This means that it’s possible to start a draft with any of the white cards that synergize with +1/+1 counters, and navigate towards a very fast deck. The Rakdos madness deck hits extremely hard with particular combinations of commons that go pretty late, namely Viashino Lashclaw and Skophos Reaver. 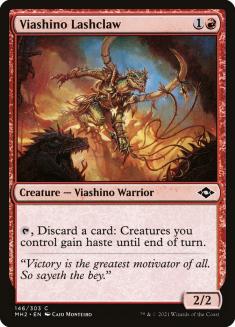 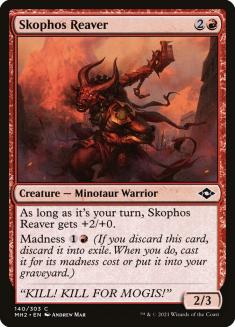 And there’s even more nuance and texture to these aggressive decks. While the Azorius Affinity archetype is often slower, fast versions of the deck can exist. I have cast enough artifact creatures to double-spell with Sojourner’s Companion on Turn 4 in both Boros and Azorius, and that can overwhelm some opponents.

It’s not that I think this format is crazy fast and you should only draft aggro decks. I like the slow decks. I just don’t think enough people are respecting the aggressive decks. This also means a lot of the slow decks I play against aren’t prepared for my speed. They spend time landcycling, and by the time they’re set up, the game is over. On Sunday I attacked on Turn 4 with three four-power creatures, all of which are common. It’s time to take a step back and start re-evaluating cards to respect aggressive decks.

This is looking like a Rakdos Madness draft, but it’s still possible to take this another direction. Izzet Delirium would much prefer this Sojourner’s Companion, and so would Boros Modular/Affinity. It’s also probably just the best card in this pack. However, I think the other options to stay on the Madness path are a better idea.

Cabal Initiate is overrated. It’s a fine enabler for madness, but it’s not really a premium discard outlet because the body and effect aren’t all that relevant. It’s still a good card that I’m happy to have when I care about discard, but I don’t take it highly. I would rather take madness cards over it, like this Skophos Reaver.

This begs the question, is Necromancer’s Familiar a good enough card to take over Skophos Reaver? I don’t think so. Familiar is flashy, as it has lots of semi-relevant text. It’s a flier, can have lifelink, can be indestructible, and is a good discard outlet. However, it’s also four mana, and Rakdos Madness gets extremely clogged at the four-drop slot. Most creatures with Madness are four mana, and there’s enough interaction that I don’t expect my two-drop discard outlet like Viashino Lashclaw or Cabal Initiate to live.

I don’t want to draft a deck that falls on its face without a discard outlet, and the more four-drops you draft, the more likely that’s the case. In fact, Skophos Reaver as a good-rate three-drop to play without madness fills that exact role. I am happy to cast this on Turn 3 if my Lashclaw is killed, and if it’s not, I get to attack for four on Turn 3. That’s a win-win. Also, Reaver has the nice bonus of keeping doors open to a nonblack red deck. While I don’t like Reaver in those decks, it can still play a beatdown role if that’s what I need. So, while I think most people would take Familiar, I think this is a pretty clear Skophos Reaver.

Mount Velus Manticore is a cool card that initially looks like it’s a madness enabler, but it’s actually quite bad in most madness decks because the four-drop slot is so clunky, and most cards for that deck are only a single card type. Manticore is actually meant for Izzet Delirium, as it’s two different card types, gets better with other cards that are two different card types, and discards cards to get Delirium.

Once you adjust your evaluation of Manticore in that manner, I think both the other options are better picks. Vermin Gorger is the correct pick if you’re committing to Rakdos Madness because it’s a solid aggressive two-drop. Myr Scrapling is the better hedge to a different archetype because Arcbound Shikari and Arcbound Whelp push in that direction, so I’m more likely to pivot to Boros than Izzet.

I took Myr Scrapling because I just don’t think Gorger or Manticore make my good Madness decks. I think it’s higher-value to open the door to pivot than it is to take a mediocre filler card for the deck I’m currently drafting.

Blazing Rootwalla is an uncommon madness card, and it’s a pretty cool one. Madness for no mana can be quite a surprise. You’re tapped out and your opponent thinks they will win the race, but then an extra three-power attacker on their end step changes the race in your favor. It also really helps cards like Faithless Salvaging have good moments to cast, because a big problem with that card is that spending two mana to discard can be awkward with a lot of the madness cards. If I have multiple copies of Salvaging, I really try to prioritize Rootwalla and Kitchen Imp higher than I usually do.

I wouldn’t fault anybody for taking Rootwalla, but I actually think Viashino Lashclaw is the correct pick. This card has been the main reason my opponents feel hopeless. Turn 4 casting a two-drop, and then activating Lashclaw to cast Skophos Reaver with haste is just so much damage out of nowhere. The games where I cast this card on Turn 2 are vastly different from the games where I don’t, so drafting multiples is a great way to succeed in this archetype. I ended up with four copies, and because of it, I cast it on Turn 2 almost every game. So I wasn’t particularly surprised when the deck below took home the trophy.