Innistrad: Midnight Hunt is here! I hope everyone enjoyed their Prerelease and have started picking up all the new cards they want for their decks. I’m waiting patiently for the preorders I placed with StarCityGames.com and cannot wait to give them a whirl in some of my Commander decks. One card I’m really looking forward to checking out is the newest Simic legendary creature: Slogurk, the Overslime! 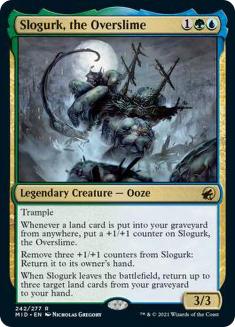 It’s no secret that many of the Simic legends in recent years have seemed incredibly redundant and overpowered, typically revolving around ramping and drawing cards, so Slogurk’s design is a breath of fresh air! While it still plays in typical Simic “lands matter” space, Slogurk’s collection of abilities are quite nice all tied up within a 3/3 trampling body for 1GU.

This ability feels a little like The Gitrog Monster, only not nearly as busted. But since Slogurk has trample, the accumulation of +1/+1 counters can make Slogurk into a real threat assuming you have ways of getting multiple lands into the graveyard quickly. Simic also has plenty of +1/+1 counter synergy you can tap into as well.

Being able to protect your commander from removal spells is huge game, and ties directly into the last ability:

You can see the basic loop here: get three land cards into the graveyard while Slogurk is on the battlefield, adding three +1/+1 counters to Slogurk so it’s a 6/6 trampling Ooze. Remove those counters from Slogurk to return it to your hand, and when it leaves the battlefield, you get to return three lands to your hand. Rinse, repeat. What’s cool is that last ability triggers regardless of how Slogurk leaves the battlefield. If you don’t have enough +1/+1 counters on it and it gets destroyed or exiled, you’ll still be able to get up to three target lands back from your graveyard.

So, what do we do with this little bundle of abilities?  Let’s dig in!

I think the strongest approach to building a deck with Slogurk is to lean quite heavily into +1/+1 counters synergies in Simic, and there are a lot of them! One of them, Slurrk, All-Ingesting, is even a fellow Ooze!  If you can boost Master Biomancer with a +1/+1 counter, Slogurk will enter the battlefield with the three +1/+1 counters it needs to bounce itself. If you want to tap into Simic’s quality land ramp options, Retreat to Kazandu can generate a ton of extra counters, especially with lands that sacrifice to search for another land, so you get extra counters on Slogurk. Sword of Truth and Justice protects from some of the best exile creature removal spells out there like Swords to Plowshares or Ravenform, and its proliferate trigger is awesome if you really lean into the theme.

Tyrite Sanctum is an awesome land that I love in many decks, but it likely shines the best in a deck with Slogurk. Add a counter and make it an Ooze God, and then next turn sacrifice it to make it indestructible, giving it yet another +1/+1 counter. If Slogurk is removed some other way you’ll be able to get it back from the graveyard with Slogurk’s last ability.

Okay, so how do we get those +1/+1 counters rolling? Well, there are plenty of lands that will put themselves right into the graveyard for our Ooze overlord.  Lands that sacrifice to search up other lands are nice here, like Evolving Wilds, Myriad Landscape, and Misty Rainforest. Also, cycling lands like Tranquil Thicket and Remote Isle. In fact, I would play every cycling land I could get my hands on, since when Slogurk gets them back from the graveyard those are low-cost redraws as you cycle them again.

If you have land search in your deck (including, say, Tolaria West) you can assemble Dark Depths with Thespian’s Stage multiple times in a game with Slogurk. Other good options include Crop Rotation and Elvish Reclaimer since they both put a land in the graveyard to boost Slogurk. Or how about Scapeshift? If you want to play it safe, just sacrifice three lands to boost Slogurk that you can get back later if needed and go get Dark Depths, Thespian’s Stage, and my personal favorite, Mirrorpool!

Turntimber Sower and Centaur Vinecrasher are interesting designs that I’ve always considered just not quite good enough for Commander land-based strategies, but they both seem to be perfect inclusions in a Slogurk deck since they both trigger from land cards entering graveyards from anywhere. Centaur Vinecrasher even triggers on lands entering any graveyard, not just your own.

I really love Command Beacon as a way to completely sidestep commander tax on Slogurk since it will be so easy to get back for multiple uses.

Other ways to get lands into the graveyard are the dredge and retrace mechanics. Simic can make use of the green side of Golgari’s dredge suite with the high-quality Life from the Loam and Golgari Grave-Troll, but also some of the cards a little lower on the power scale. There’s no shame in dredging back Moldervine Cloak, maybe milling a land in the process, and enchanting your trampling Ooze commander with +3/+3 to get your breatdown on. Life from the Loam with cycling lands has been a potent engine in all sorts of decks over the years, and we can make use of it here.

Retrace isn’t quite as explosive as dredge, but once retrace cards are in the graveyard, they provide a nice way to cash in lands you’ve gotten back to your hand with Slogurk for a nice effect, especially Spitting Image copying the biggest threat on the battlefield outside of your own Slogurk.  Oona’s Grace being an instant can make Slogurk’s +1/+1 counter ability into a combat trick, or a way to put that third +1/+1 counter to bounce it back to your hand to dodge removal.

I’d like to look for some ways to get lands into your hand so that they can eventually be played and sacrificed or find their way into the graveyard some other way. Realms Uncharted is picture-perfect in a Slogurk deck; at instant speed you can put two lands in the graveyard to give Slogurk two +1/+1 counters, and you know you’ll be able to get either or both of them back with Slogurk sooner or later.

I really love Trench Behemoth’s ability to pick up cycling or lands you may have needed to play early for mana so you can make use of their cycling later. The same goes for modal DFCs like Bala Ged Recovery that can be played as lands.

If we’ve got lands in hand from Slogurk or other reasons, let’s toss them in the graveyard for profit!  Dreamscape Artist is great for this since you can discard a land to the Spellshaper ability, sacrifice a land, and go put two basic land cards onto the battlefield, netting two +1/+1 counters for your Slogurk. Trade Routes can give any land cycling. At the top end of the curve, if you’re playing a relatively spell-heavy deck, you might consider Jadzi, Oracle of Arcavios, since both sides can return to your hand by pitching a land card.

There are other ways besides dredging that let us mill cards for profit, potentially dumping more land cards into the graveyard for Slogurk. Drown in Dreams seems sweet with Slogurk on the battlefield since you can target yourself for the mill at instant speed and potentially make Slogurk huge! World Shaper and The Mending of Dominaria can mill and eventually get all those lands in the graveyard onto your battlefield for some serious ramping. I don’t see Bond of Insight seeing much play in Commander but it seems like it could do some nice work in this deck.

While we can bounce Slogurk by its own ability, there are some other ways we can have Slogurk leave the battlefield and retrieve lands from our graveyard. Sanctum of Eternity is an easy one that happens to be a land, so it plays great with our other land synergies. Sword of Heart and Home let us search up a basic land and blink Slogurk, so you get to retrieve lands without having to recast Slogurk. In fact, we can make use of other blink effects like Conjurer’s Closet and Thassa, Deep-Dwelling. This would be a great deck to use that sweet Conjurer’s Closet promo from the Commander Parties being held by WPN stores Halloween weekend, including the Commander Celebration at SCG CON!

Another angle to a Slogurk deck is to go Ooze tribal. You miss out on some of the cool black Ooze creatures like Necrotic Ooze and The Mimeoplasm, but you get the sweet Simic Oozes like Experiment Kraj and Prime Speaker Vannifar and a deep bench of quality green Ooze creatures like Biogenic Ooze and Acidic Slime.

If we want to lean hard into Ooze tribal, Simic gives us some really nice creatures with changeling, especially the crop from Kaldheim. Mistwalker gives us a flying Ooze! And of course, any blue tribal deck gets access to the absolutely bonkers Kindred Discovery.

Before I sign off, I did want to mention this new little weird card from Innistrad: Midnight Hunt, Willow Geist: 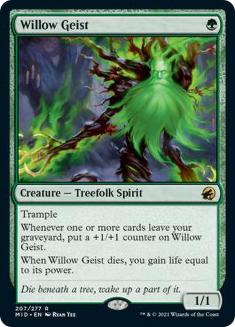 With all the lands jumping in and out of our graveyard, this little Treefolk Spirit might grow a bit over time. The wording of its triggered ability means we can’t grow it fast; each time Slogurk leaves the battlefield you’d only get one +1/+1 counter on Willow Geist even if you get back three lands. I went looking for other Simic cards that might trigger from cards leaving my graveyard and couldn’t find anything, but maybe this design space will see further exploration in future sets. If you’re leaning into +1/+1 counter synergies I could see finding a slot for this!

So, what do you think of Slogurk, the Overslime as a Magic card?  Are you going to play it as a commander or in the 99 of some other Commander deck?  What other cards work great with it?

Do me a solid and follow me on Twitter!  I run polls and get conversations started about Commander all the time, so get in on the fun!  I’d also love it if you followed my Twitch channel TheCompleteCommander, where I do Commander, Brawl and sometimes other Magic-related streams when I can.  If you can’t join me live, the videos are available on demand for a few weeks on Twitch, but I also upload them to my YouTube channel.  You can also find the lists for my decks over on Archidekt if you want to dig into how I put together my own decks and brews. And lastly, I just want to say: let us love each other and stay healthy and happy.