Innistrad: Crimson Vow continues to deliver sweet new commanders to build decks around!  I’ve done deep dives on four legends so far (you can check them out here). This week I’ll dive deep into one of the Humans fighting back the night in the world of Innistrad: Halana and Alena, Partners! 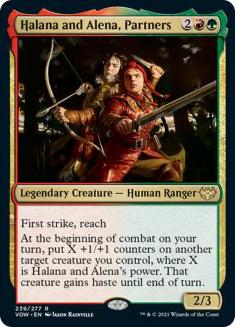 At first blush, Halana and Alena, Partners (hereafter “H&A”) isn’t the most bonkers or splashiest legend we’ve seen over the years. A 2/3 for four mana is definitely below rate for a rare, even with the abilities first strike and reach. But there’s a lot going on in the rest of the text box!

At the beginning of combat on your turn, put X +1/+1 counters on another target creature you control, where X is Halana and Alena’s power.  That creature gains haste until end of turn.

That word “another” is critical here and means that H&A needs other creatures on your battlefield to get the full measure of its abilities. It’s actually a nice bit of design here, because otherwise your correct line of play is to cast H&A, target itself with its ability to boost its power to four, and then you could either target itself again to double its power or give a massive boost to another creature you control.

As it’s worded, you need to jump through a few more hoops to unlock its power.  First of all, you need plenty of creatures, and preferably one already on the battlefield. And then you’ll want ways to boost H&A’s power so that boost increases.  And since the boost is in the form of +1/+1 counters, you might want to dip into the vast and deep well of +1/+1 counter synergy that Wizards of the Coast (WotC) seems to love to constantly fill with new and powerful cards.

The first things I wanted to look for are ways to boost our commander’s power, and one of the first cards I reached for was Rancor. This little enchantment provides a whopping two power boost for just one green mana, with bonus trample and the ability to return to your hand if it goes to the graveyard from the battlefield. Boosting H&A’s power accomplishes two things: it makes its triggered ability more effective, and it also plays great with its first strike ability.

Another card I ran across while researching was Colossification.  +20/+20 is an incredible rate for seven mana, but with the downside of tapping the targeted creature.  Luckily for us, even if H&A is tapped, it will still provide insane value for its triggered ability, adding at a minimum 22 +1/+1 counters to some lucky creature you control, making it instantly one of the most threatening monsters on the battlefield. Yes, there’s some risk involved if an opponent hits H&A with an instant removal spell in response to targeting it with the Aura, but this is the kind of high-risk/high-reward haymaker play that Commander was born for.

Stumpsquall Hydra and Verdurous Gearhulk are particularly awesome because they are creatures that can provide a boost to H&A when they enter the battlefield, and then you can immediately turn around and give that boost right back – and then some – and have the creature attack with haste if you want. So yeah, cast Verdurous Gearhulk the turn after H&A, and potentially attack with H&A for six and the Gearhulk for a whopping ten power, boom!

Next, I wanted to look for creatures and spells that benefit from an increased power benefit since we’ll be boosting H&A’s power as well as the power of other creatures with H&A’s triggered ability. Gyre Sage, Incubation Druid, and Marwyn, the Nurturer can turn those extra +1/+1 counters into more mana.  Wild Beastmaster and Cultivator of Blades take that power boost and translate it to all your attacking creatures when they attack. Champion of Lambholt can make it so that smaller creatures can’t block your attackers.  Boosting Krenko, Tin Street Kingpin’s power can pump out a bunch of Goblins you can block with or attack with later. Tana, the Bloodsower can do the same if she tramples through for enough damage.

It shouldn’t take long before you have a creature of sufficient power to cast The Great Henge ahead of time, and the subsequent creatures getting extra +1/+1 counters plays nicely with everything else you’ve got going on.

Speaking of all these +1/+1 counters, let’s tap into some of those synergies that are so plentiful in green. In particular I really like the creatures that play well with +1/+1 counters, and number one on my wish list is Kalonian Hydra.  Cast this the turn after you’ve cast H&A, add two counters from H&A’s trigger, and then attack, doubling the Hydra’s counters and smashing in for a whopping twelve points of trample damage.  Mowu doesn’t hit quite so hard, but the vigilance makes up for it by attacking (with haste) while also pulling blocking duty.

Bloodspore Thrinax can play the role of your mini-commander, adding to each other creature you control however many +1/+1 counters it has on it, and with H&A you bank on getting at least two.  How about if H&A is enchanted with Colossification and you add 22 counters to Bloodspore Thrinax?  Those are some really big boom-booms coming!

Creatures that come with +1/+1 counters often have special abilities tied to those counters, so they can make great use of H&A’s ability.  Fertilid can help you ramp, and Spike Weaver can keep large counter-attacks at bay. Hooded Hydra, Hangarback Walker, and Ochre Jelly provide resistance to battlefield sweepers.  Imagine putting all those Colossification counters on Lifeblood Hydra and your opponents reluctantly have to kill it?  Boom, so much life and card draw!

Let’s not overlook how sweet it is that H&A gives the target creature haste!  There are some incredible creatures with attacks triggers where we normally have to wait around a turn before we get to make use of it, like Etali, Primal Storm.  Kogla, the Titan Ape can come down, fight a creature, immediately attack with an H&A boost, and then destroy an artifact or enchantment.  Plus, H&A is a Human, so you can even use Kogla to save your commander from a terrible fate (while hopefully benefitting from gaining indestructible along the way).

Pathbreaker Ibex covers all the bases, getting haste and a power boost from H&A, and it boosts your entire team and gives them trample!

Since our commander has first strike, I wanted to look for ways to give it deathtouch, and thankfully green has access to some good ones, in particular Ohran Frostfang since it can lead to some nice card draw if your opponents don’t have chump blockers or don’t want to block your attacking deathtouchers. I’ve also been adding Saryth, the Viper’s Fang to a lot of decks these days. Giving your tapped creatures deathtouch is nice with an aggressive deck, and if you give Saryth haste with H&A you can even untap an attacking creature if someone is trying to target it with removal to turn back on the hexproof protection.

Let’s fill the lower end of our mana curve with some decent creatures that will get even better with two +1/+1 counters from H&A the turn you cast it. Experiment One will get a counter from its evolve ability, and then two counters from H&A, and you’ve got a 4/4 Human Ooze that can potentially regenerate.  Pelt Collector will grow in a similar way and will easily gain the trample ability. And how about Slumbering Dragon, which can dissuade opponents from attacking early but can accumulate some +1/+1 counters from H&A and get in on the action quickly!

Since it was printed, Ragavan, Nimble Pilferer has been terrorizing Modern, so it’s easy to forget about the first time we say this legendary Monkey, attached to Kari Zev, Skyship Raider!  Kari Zev was built for Standard and gets outclassed quickly in Commander, but if we lean into a more aggressive build, adding +1/+1 counters to Kari Zev can quickly make her first strike and menace abilities quite fierce.  Robber of the Rich is another aggressive card that can benefit from getting larger so it can keep attacking and steal some cards from opponents whose hands are flush.

Kodama’s Reach and Cultivate are must-run ramp cards for just about any green deck, but in this deck, I value the body attached to ramp spells like Wood Elves and Springbloom Druid. I’m a huge fan of Radha, Heart of Keld in any deck that can run her, but giving that power boost from H&A combined with Radha’s first strike when attacking is awesome!

Also keep an eye out for are extra-attack effects, of which there are plenty in red! Getting H&A’s trigger multiple times in a turn can be quite helpful, especially if we’ve been able to boost our commander’s power along the way. Creatures like Combat Celebrant and Port Razer are awesome because they can be used immediately when given haste from H&A’s ability.

Before I wrap things up, why not add the original incarnations of our commander?  Alena, Kessig Trapper is particularly nice since she can likely generate a fair amount of mana with her ability, and her first strike ability certainly appreciates any +1/+1 counters you add to the card. Halana is a little less synergistic since her fight ability can’t wait until you add counters to the creature, but if you pick off something small, the counters that your commander adds can make it safer to attack.

Before I wrap up, let me just say that I think H&A is a great card to include in the 99 of a lot of other Commander decks, and look forward to that incremental value even if it’s not doing all the explosive stuff you can do with it as your commander.

So, what do you think of Halana and Alena, Partners? Is there anything you would play with it that I didn’t mention above?

Do me a solid and follow me on Twitter!  I run polls and get conversations started about Commander all the time, so get in on the fun!  I’d also love it if you followed my Twitch channel TheCompleteCommander, where I do Commander, Brawl and sometimes other Magic-related streams when I can.  If you can’t join me live, the videos are available on demand for a few weeks on Twitch, but I also upload them to my YouTube channel.  You can also find the lists for my paper decks over on Archidekt if you want to dig into how I put together my own decks and brews.  And lastly, I just want to say: let us love each other and stay healthy and happy.