Recent designs for legendary creatures have impressed me.  For Strixhaven and Commander 2021 in particular, many feel potent and cool, yet not generically overpowered.  I really like how niche their abilities are, and you really have to tailor your deck in certain ways to unluck each commander’s full potential.

The “downside” to this?  Well, these sorts of commanders are catnip to a deck brewer like me, and not only do I enjoy cooking up deck ideas for them for my column here and other content, but I’ve also found the inspiration to build a lot of these decks in paper. Since the release of Strixhaven and Commander 2021 I have built five brand-new Commander decks in paper and have another one on my desk in progress.  If you want to see more on that, make sure you follow me on Twitter. 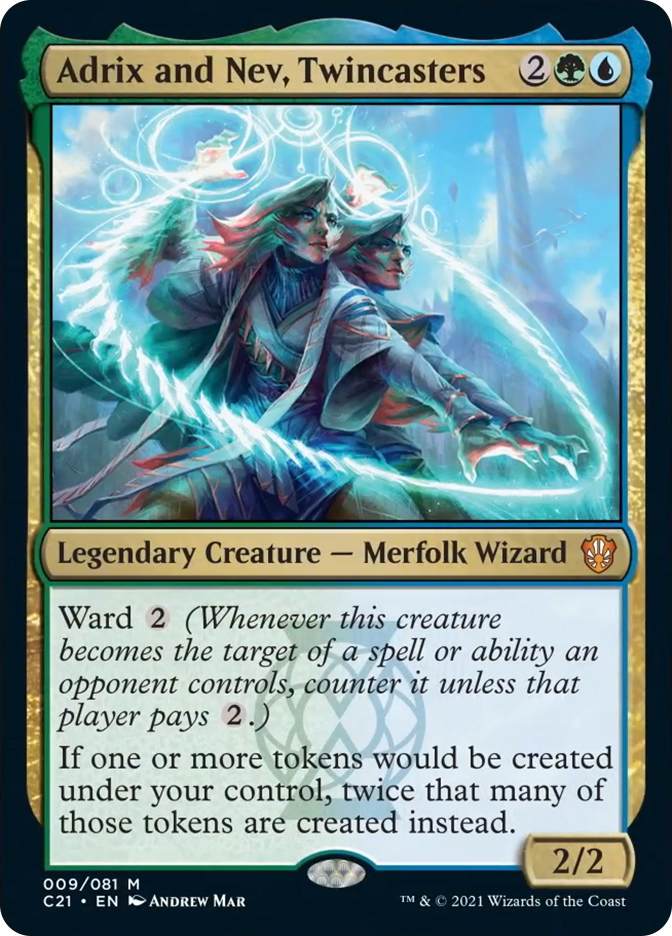 This is the “face” commander for the Quantum Quandrix deck from Commander 2021, and its abilities are so straightforward that there isn’t even any explanation for this card in the release notes from Wizards of the Coast (WotC).  It features the ward ability, which makes it two mana more difficult to be targeted by a spell or ability an opponent controls. Which definitely helps make it a little more resilient as a commander and easier to lean into taking advantage of its static ability:

If one or more tokens would be created under your control, twice that many of those tokens are created instead.

Adrix and Nev basically offer an Anointed Procession that you can cast from your command zone.  Anointed Procession is a highly potent card in Commander, so much so that it’s now going for around $40 as a single. Having this effect stapled to a creature is actually a bit of a detriment in Commander since everyone’s deck is usually packing a lot of sweepers and pinpoint removal for creatures, which is why that ward ability helps a bit. Luckily, if you can play Adrix and Nev you also have access to the best mana ramp in the format, so if it’s your commander odds are pretty good you’ll be able to recast it several times from the command zone if needed.

What’s really neat about that one-sentence block of text is how many different angles you can go with it.  Obviously, if you want to make a deck chock-full of token creatures Adrix and Nev is going to juice up that strategy quite nicely, but token creatures aren’t the only thing that we might want to copy—there are all sorts of tokens that get created from a wide variety of spells and effects, which makes Adrix and Nev good as a supporting card in the 99 as well as being your commander.

To my mind, the coolest way to leverage Adrix and Nev’s token-doubling ability is to focus on ways you can make copy tokens of creatures and other permanents.  Copying things can lead to some wild game states in a singleton format like Commander and having a lot of copy effects also tends to scale quite well in a game of Commander where power levels between decks can be off.  If the best creature on the battlefield is high-power or low-power, your copy spell scales with it, which I think makes some great gameplay.  This is how I built my own deck in paper. Consider it strongly if you’ve got access to Adrix and Nev in your deck.

When you think of blue’s ability to copy things, you often think of Clone and cards similar to that, but there are also a ton of cards that just make copy tokens, and Adrix and Nev will double those copy tokens. Plus, when you use these spells, you get to use one of the coolest Copy token cards around:

I’m particularly excited to finally get Bramble Sovereign off the bench.  This gem from Battlebond jumps into a lot of decks I’m brewing but always seems to get left behind when I have to make the final difficult cuts to get down to 100 cards. Imagine casting Faerie Artisans with Adrix and Nev on the battlefield and paying the mana on Bramble Sovereign’s ability to copy it.  Now, whenever a nontoken creature enters the battlefield under an opponent’s control, you get to create six copies of that creature!

There are a lot of cards that do cool things with tokens, so a deck with some of these and Adrix and Nev will work quite well.  I really love Curiosity Crafter, a new card from Commander 2021, since it helps keep the cards flowing when you deal combat damage to opponents with your tokens. In particular I want to copy Curiosity Crafter and draw extra cards off the token copying our Bird Wizard.

Nacatl War-Pride often gets my mind whirring.  I like to ponder about multiple attack steps, where you can attack several times with those copies you’re making that survive the first round of attacks.  In a deck with Adrix and Nev on the battlefield, attacking someone with Nacatl War-Pride basically means three points of damage to a player for each creature they control.  That can potentially be a lot of damage!

Clues are another type of token that are awesome to copy, providing more delayed-blast card draw artifacts for each effect that gives you one. Ulvenwald Mysteries even generates 1/1 white Human Soldier tokens too for more doubling.

Making Treasure tokens is white-hot these days, with lots of high-power cards like Hullbreacher, Dockside Extortionist, and Smothering Tithe providing a rush of tokens you can sacrifice for mana, so why not get twice as many with Adrix and Nev?

Strixhaven and Commander 2021 bring us a brand-new type of creature token: Fractals!  These 0/0 creatures tend to enter the battlefield with +1/+1 counters on them, so if you are double-dipping on tokens and +1/+1 counters with cards like Doubling Season, Adrix and Nev can push that theme even further.

I’m particularly excited about casting Body of Research with Adrix and Nev on the battlefield.  Creating one gigantic Fractal token is going to be awesome, but it’s going to have a huge target on its head for pinpoint removal, so let’s make an extra one just to be sure.

Food is another nifty type of token with a fair amount of support that could play alongside Adrix and Nev. In particular, why not take Oko off the bench and reassure your opponents that you just want to make double Food—one for eating, and one for Elk-ing!

It’s always a good idea to keep an eye on the creature type line for new legendary creatures. It’s nice that Adrix and Nev is a Merfolk given how many Merfolk cards make tokens. Adrix and Nev is also a Wizard, but I didn’t really see all that many cards that generate Wizard tokens.

When researching cards for this article I ran across two versions of Jace that make token copy of themselves, so if that’s something you’re interested in doing (and if you are, you might also be playing Doubling Season), maybe you should add Adrix and Nev to the mix for maximum Jace-ception.

Saprolings are a long-hallowed creature token type, around since the hoary days of Fallen Empires. I’ve selected a few of the more powerful cards that generate Saprolings above, but any quick database search will reveal a ton more.  If you’ve also got access to blue, make sure you find a spot for Adrix and Nev for extra crunchy 1/1 green token creatures.

If your decklist has creatures with embalm or eternalize and access to blue and green, Adrix and Nev can double your fun.

There are a ton of cards that make creature tokens, and I only touched on a small fraction of them here, but I picked ones that looked particularly juicy alongside Adrix and Nev. I really love that Retrofitter Foundry leaves behind a token each step of the way thanks to the doubling effect so that you end up with a 1/1 Servo, a 1/1 Thopter, and two 4/4 Constructs at the end of the chain. Which now that I think on it, you can ultimately create six more 4/4 Constructs all from that first activation that creates a Servo.

Lastly, I wanted to call out the cards that create token creatures for extra card draw.  Green and blue in Commander have a metric ton of raw card drawing ability that you’re often going to be playing anyway, so why not turn that into extra tokens generated by these cards in your Adrix and Nev deck?  I know I personally put in an order for some extra Tentacle tokens for the Nadir Kraken in my Adrix and Nev deck, because all those Kraken Tentacles are sure to make my Merfolk commander feel right at home.

What do you think?  Are there any other cards you think would play great alongside Adrix and Nev, Twincasters?