My experience drafting often informs my approach to Constructed, for better or worse, and lately, I’ve been drafting a lot of Azorius Party decks because I keep winning with them.  That has very little to do with Standard, but some of the cards felt so strong I just had to try it.

The reality of Standard, particularly a small Standard format like we have now, is that a lot of decks are simply off-limits because the mana isn’t good enough, especially relative to other decks.  The disadvantage that you sign up for by playing a two-color combination without a Pathway against a two-color combination with a Pathway really can’t be overstated.  I knew that I could try playing with these cards to get a feel for them, but I’d lose enough games because my mana just didn’t work that I wouldn’t win at a competitive rate.  Still, when you’re just trying to learn about the spells, you can write off those losses and move on, and there’s still something to learn by just casting the spells against other spells in Standard.

The first card I wanted to cast was Spoils of Adventure.  At six mana, Spoils of Adventure is a horrible card.  At five mana, it’s fringe-playable, and at four mana, I’d expect it to be a Standard staple.  With a printed cost of two or three mana, Azorius Control would probably be oppressive. 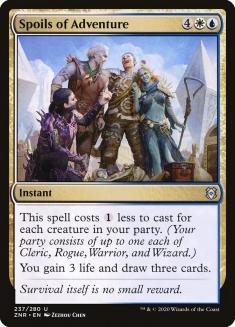 There are two kinds of party cards.  There are some that really want you to have a full party, and some that are happy if you just have a party member or two.  The cards mostly explicitly tell you which category they fall into by including the words “if you have a full party” if that’s what they’re looking for.

We’ve seen Acquisitions Expert show up without any other party members, and cards like Concerted Defense and Spoils of Adventure are good enough if you’ll only have one or two types — they don’t need you to balance types in your deck and play huge numbers of creatures. Concerted Defense isn’t unreasonable if you’re just playing Dimir Rogues, for example.

Trying to get a full party requires playing a really high density of not-especially-great cards, but Brazen Borrower by itself gets you a good part the way to being able to cast Spoils of Adventure with just a little support.

I wanted to try to build an Azorius Control deck that could mostly play at instant speed and could take advantage of Spoils of Adventure, so I looked for other creatures with flash and a party type.  I found a few options. They’re not great, but here’s what we have to work with: 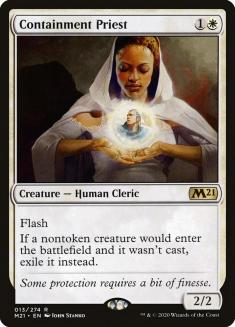 A 2/2 flash Cleric with text that can sometimes come up against Yorion, Sky Nomad or Feasting Troll King.  Not great. 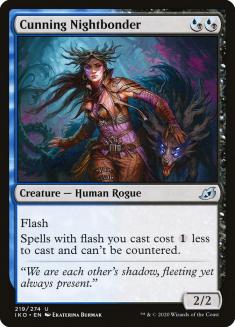 A little harder to cast in an Azorius deck and the type isn’t as good since it’s the same as Brazen Borrower and Glasspool Mimic.  The text is maybe a little better, but overall, I think this is a worse fit. 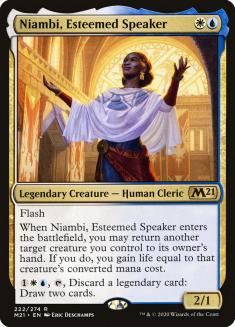 Another flash Cleric.  This one has a lot more text and a bit more potential.  It plays well with Brazen Borrower and Skyclave Apparition, and I might be able to find some legendary cards I want to play. 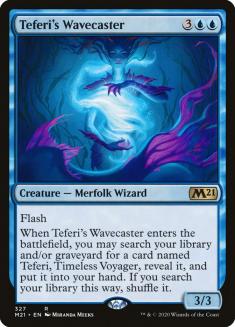 What? Okay, it’s a five-mana 3/3 flash Wizard that comes with another card.  As far as five-mana flash threats go, this doesn’t sound better than Thryx, the Sudden Storm; Voracious Greatshark; or Zareth San, the Trickster, but I’m willing to consider it.  So what’s this other card it comes with? 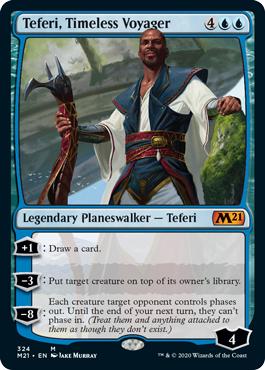 So it’s basically the standard five-mana planeswalker template except it has a relatively weak version of the +1 ability, a very weak version of the -3 ability, and a horrible ultimate. All in all, that would probably be roughly balanced as a four-mana planeswalker, but it costs an extra mana instead of a discount.  Sounds about right for a Planeswalker Deck card.  At least it’s a legendary card I can discard to Niambi.  (And, as I discovered while playing this deck, then return to the battlefield with Elspeth Conquers Death.)

None of these options are appealing compared to the alternatives in Standard, but I really wanted to cast Spoils of Adventure, so let’s go.  Long story short, here’s where I decided to start:

This isn’t the worst deck I’ve ever built, but despite the fact that I won the first two matches I played with it, it’s probably in the bottom 20%.

So what did I learn from this? 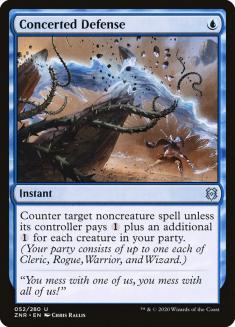 Concerted Defense was at its best where it was at its most narrow —countering Embercleave and The Great Henge was awesome, but games against control decks went long enough that it was pretty bad.  This card is strong, but only if you’re ending games.  This isn’t the right fit for Spell Pierce, even if you can sometimes make it a little more powerful. 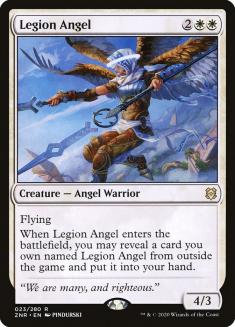 Legion Angel kind of impressed me.  As far as bad cards that I was playing for types go, it was a pretty real threat.  This matches my experience when I randomly threw one in a Yorion deck for a Best-of-One event.  It’s big enough to matter, which means your opponent basically has to spend a card answering it, which means that if you’re not already far behind, each copy buys you time to deploy another copy, and a lot of opponents will just run out of ways to deal with them. 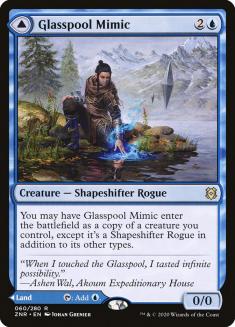 Glasspool Mimic continues to be a little awkward, but great with Skyclave Apparition.

Niambi is more cute than strong, but I could see it being a role-player in some kind of Party deck. 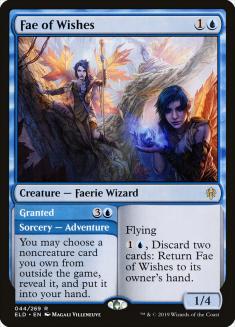 The Planeswalker Deck cards were definitely much worse than just playing four copies of Fae of Wishes instead, as it’s a better way to get a Wizard on the battlefield and a better way to spend a lot of mana for value.

Spoils of Adventure was powerful, but definitely clunky, and would have been a lot better if I had better cards to draw.  When I was a kid, and talking about the best card in the game, a friend made the point that “Ancestral Recall isn’t any good if your deck sucks,” and the point kind of stands here.

This deck tries to learn lessons from the previous deck.  More creatures and a more aggressive plan make Concerted Defense and Spoils of Adventure a lot stronger.  I also just really like the idea of curving Watcher of the Spheres into Master of Winds.

Playing a bit with the deck, the missing Pathway hurt a lot, but the high land count thanks to the DFCs helped, and the deck actually played out pretty well.  I think this is the most promising approach I’ve found. 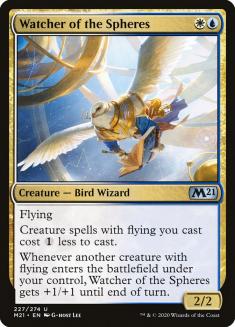 As anticipated, Watcher of the Spheres really impressed me here. I haven’t really managed to find a deck that wanted to play it with a good number of four-mana flyers that it could let you cast on Turn 3, and it’s particularly great with both Master of Winds and Legion Angel because both add more cards do you hand, so you can continue to use the discount to keep making plays, rather than just emptying your hand and running out of stuff to do.

You could also add some combination of Elspeth Conquers Death, Skyclave Apparition, and presumably Omen of the Sea and turn this into a Yorion deck, which seems roughly as strong to me.

The other direction I explored was leaning into the full party matters side of things.  The fact that Archpriest of Iona; Nimble Trapfinder; Linvala, Shield of Sea Gate and Squad Commander form a smooth one-through-four curve of rares that want a full party and give you a full party points to the idea that these cards were all intended to be played together, so I figured I’d try doing that. 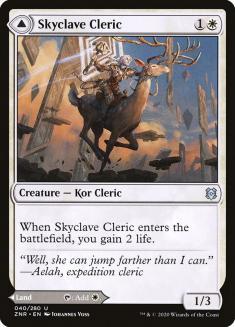 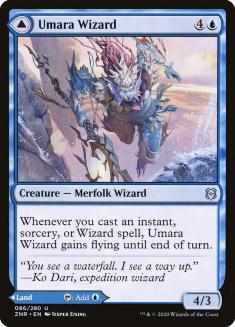 I liked having a lot of DFCs with types, since I could play the ones that matched types of creatures I drew as lands and save unique types to round out my party, but when combined with Temple of Enlightenment, I just didn’t have enough untapped lands.  Again, a Pathway would be huge here. 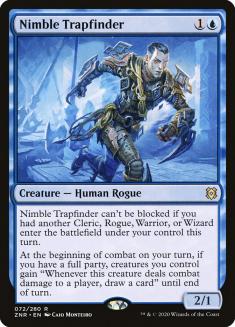 Nimble Trapfinder is probably the weakest of the full-party rares.  The unblockability is pretty nice, and this deck does actually draw cards off it sometimes, but it’s mostly a win-more at that point.  It might be better if it weren’t always getting Stomped, but as is it feels like too much of its power is tied into drawing cards when you’re already killing your opponent. 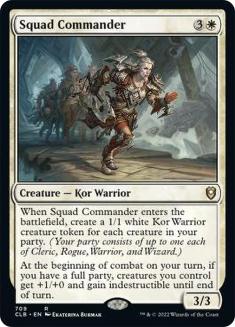 Squad Commander was the payoff that actually mattered, it scales nicely with party members and isn’t embarrassing to cast with a partial party, and often puts you in a position to win whenever you complete your party. 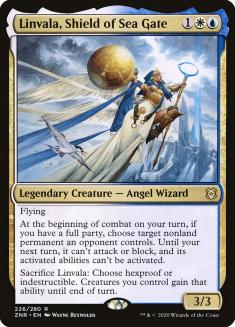 Linvala was also pretty good here, as all the text really matters, and protecting your other creatures in this style of deck definitely comes up.

Spoils of Adventure was actually the weak link here.  It’s kind of like a super-extreme Thoughtcast, which doesn’t see play in Affinity for the same reasons.  This deck really just wants its cards to build up types on the battlefield for Squad Commander and Tazri, Beacon of Unity that are a lot more synergistic with the game plan.  Spoils of Adventure could help against an opponent with a lot of removal, except that those are the people you can’t cast it against because you can’t build up a discount.

What this deck really wanted was just more cheap party members that aren’t horrible.  There aren’t enough one-drops and the two-drops either don’t have enough power or die to Stomp.  When you combine that with the fact that it’s really unlikely that three of your lands enter the battlefield untapped, Glasspool Mimic isn’t really a card you can cast on Turn 3, and it just turns out to be a lot harder to build a battlefield than you’d expect. 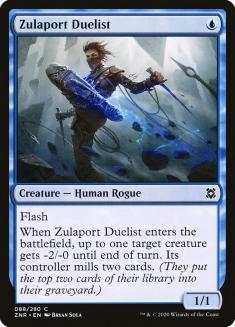 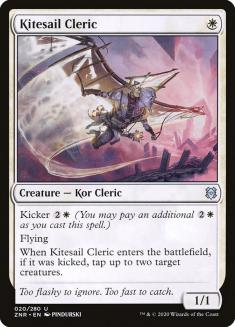 I tried rebuilding the deck with Zulaport Duelist and Kitesail Cleric, but those cards are just tragically low-impact.  Seasoned Hallowblade can give you a creature that has enough power to matter while being a bit less fragile, but you don’t really want creatures that share a type with Squad Commander when that’s your big payoff.

This makes me think the best way to build a Squad Commander deck at the moment is probably just taking the Skies list and cutting the Spoils of Adventures for Squad Commanders, which could easily be an upgrade.

So, to sum up, the main conclusions from my foray into building Azorius Party decks in Standard are as follows: