Hello, and welcome back to this week’s installment of Sullivan’s Satchel. February is going to be the most Magic-focused month of my life since the old grind of the SCG Tour, with three shows plus a visit to Seattle to work in-office with Magic’s Play Design team. This has required a ramp up of knowledge in multiple formats, and it’s been fun to do a deep dive after years of skating by on grit and charm. Life as a full-time contractor continues to satisfy: flexible hours, a sense of adventure, and the occasional conference call interrupted by my daughter asking to have her orange juice “cut with water.” As always, thank you for your questions, and send yours along to [email protected]. With that:

A few years ago, a Rhystic Studies YouTube video used Crux of Fate as a model to explain how important choice was in the Khans of Tarkir block, from choosing your favorite clan(s) to choices on cards (like the Charms or the Commands).

How important is “choice” in when you consider things from a design perspective in games (could focus on card games, or look more broadly at any types of games)?

I read a quote a few years ago that I don’t think was related to game design and that I don’t recall verbatim, but it went something like, “Choice isn’t about the number of options someone has, but their agency to create materially different outcomes.” That is a core concept in my understanding of game design, but Magic is a multiplayer game, and so the notion of players having choices is more complicated.

If I have a Jayemdae Tome and a Disrupting Scepter and some mana, I get to choose between one of my two options. Those options are quite a bit different from one another, and choosing between the two can be stimulating. But my opponent doesn’t have much agency over my choice, and if I elect to use the Tome my opponent isn’t really participating at all (the Scepter presents a choice, but I leave it to the reader to make their own judgment on how satisfying that choice is). But if my opponent draws a Disenchant, suddenly they are presented with a choice, which can be very satisfying. Yet my opponent exercising a choice (which of my cards to destroy) now leaves me less able to exercise a choice (which of my cards to activate) in the future.

That example isn’t convoluted; in fact it’s about as core to Magic’s engine as any example one could produce. The game is balanced around destructive interaction, at least at the highest levels. I am frequently choosing which of my opponent’s cards to counter, destroy, make them discard, exile along with all other copies from their deck, etc. Conversations around “choice” are adjacent to those around “interaction” in that they are subject to interpretation, and often two players would use different words to describe the same action, through that prism.

This tweet is a few weeks old, prior to Oko, Thief of Crowns’s ban in Modern. In some respects I understand what he’s getting at: the old Urza decks were about dominating on the battlefield, they played a number of cards that could be described as “interactive” and “conducive to producing choices” (certainly far more than, say, Gifts Storm), and their namesake card actually costs a full four mana. But I think most people have a sense that there is something different about Urza, Lord High Artificer and Huntmaster of the Fells and their respective surrounding cards, besides just rate and the dominance of their respective strategies.

How meaningful are the choices that one is picking from? How satisfying are they to think about?

No one can say the Urza deck is light on options. Part of the reason the deck went to time so frequently was because the player was presented with so many options, often starting on the first turn. Do you sacrifice your Mishra’s Bauble to look for a payoff, or keep it around for your Mox Opal? If you decide to use it, whom do you target? Do you use it on your turn in hopes of peeling one of a handful of cheap counters, or wait to protect your new card from discard? Sub-games built around Oko, Thief of Crowns aren’t simple to navigate, either.

These choices are difficult, and optimizing them does contribute to win rate, but we’re largely talking about optimizing an algorithm that’s about accumulating raw material (more mana, more cards, more whatever); noticeably absent from this algorithm is much concern about whatever cards your opponent might play.

Compare the above to Jund. The individual cards are distinct from one another, and they synergize not by being a perpetual resource motion machine, but by adding to the sum of each other’s parts: “I use a discard spell to take your one removal spell, and now my Tarmogoyf is bigger and there’s another card type in the graveyard.” The cards are both flexible and discrete in their functionality, in contrast to the volume of the Urza decks that don’t do anything other than draw cards, make mana, or provide architecture for a handful of payoff cards.

This ports over to deckbuilding, too. If you asked a Jund player why they’re playing almost any card, they would probably respond by describing cards within the framework of opposing cards: their Inquisition of Kozilek / Thoughtseize splits are about how much they want to beat aggressive decks versus Cryptic Command, their removal suite is informed by similar considerations. There are some light synergies; maybe playing Grim Flayer makes Liliana, the Last Hope more appealing, but you can justify playing both, one or the other, or neither for other reasons.

These sorts of thoughts have nothing to do with the Urza deckbuilding process. The player is priced into so much infrastructure for their payout cards, and Modern is flush with powerful infrastructure that makes mana or draws cards, and then that’s the whole deck. Deciding to play an Aether Spellbomb isn’t moving the needle much for me.

How many options come at the expense of another option?

Even if you hand-wave the discard spells, Jund plays a lot at sorcery speed. Activating your Treetop Village means you no longer have access to Abrupt Decay on the opposing turn. And since some of these options are public (like Treetop Village, Scavenging Ooze, etc.,) your opponent gets to play along ⁠— when I eschew an option on my own turn, it gives you a sense of what I might want you to do on your turn. That sort of cadence lends itself to meaningful decisions and interaction in a way that, for example, passing with all your mana up and then freerolling a bunch of activated powers if the opponent doesn’t play into your cards doesn’t.

Are the decisions stimulating, or just boring and hard?

Optimizing Urza activations is hard, in the same way that optimizing your credit cards for maximum rewards can be hard. I would argue it isn’t that much fun, especially when it usually emerges when winning the game is a foregone conclusion. It is extremely rare for a Jund player to be presented with a repetitive and usually meaningless decision.

I picked this example in part because Jund is revered by most game design types and the recent Urza decks are not, and from afar they can appear similar (not like Edgar’s tweet is an absurd take or anything), but I think they can be helpful in illuminating how I think about choice in games.

On a card file level, I think it is fun to choose between unlike things. Not every card can be modal, so one of the best ways to get that experience is by encouraging decks to play a range of card types, mana costs, etc. I don’t mind the occasional Humans deck (in large part because the creatures themselves have such a wide array of functionality, keywords, etc.), but I think the ideal decks have a more diverse range of cards in them.

Among modal designs, again, pick among unlike things. I think Wizards of the Coast (WotC) generally does a good job, with a couple of notable exceptions. I would like to highlight Boros Charm as an example of the “bad way.” 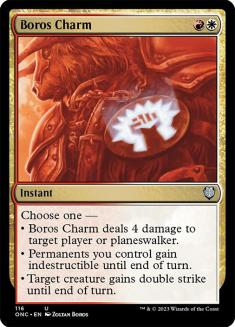 To come back to the original question ⁠— the notion of choice is complicated and nuanced, which is weird because “choice” seems like such a simple word. But not all choice is created equal, and some forms of it are much more conducive to producing satisfying games than others.

Congrats on the Play Design gig. How is it going?

Thanks, and really well. I can’t go into too much detail but I’m learning a lot, I’ve got a lot to learn, and the conversations (regardless of lockstep agreement or otherwise) have been illuminating. It’s helpful to have previous relationships with a lot of the team members, and everyone has been super-helpful getting me up to speed and showing me their process, which is quite a bit different in some regards compared to other places I’ve worked. I can’t speak for them, but so far it’s felt very good to me.

What is your favorite Magic card that sucks?

I’m guessing “sucks” means “power level,” which doesn’t mean “sucks” to me but that’s where most players are at, so cool.

I’ve told this story on the broadcast a few times but it has to be Folk of An-Havva, a Homelands superstar. My first “big” tournament was a Grey Matter event in Edison, NJ (Brian David-Marshall as either TO or Head Judge, can’t recall). The format was Vintage (then Type I), and I was maybe 14 years old and didn’t own any power. I had what could charitably be called a Gruul Beatdown deck, roughly:

Anyways, scouting around the room before the event, I noticed all the older players also played with Juggernaut. I wanted to “metagame,” so to speak, so I cut some cards (couldn’t have been that hard) to add four Folk of An-Havva. 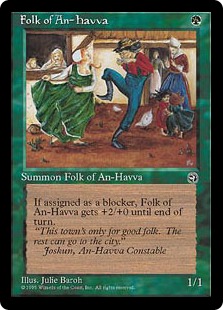 Round 1 my opponent was on the play and opened on a Turn 1 Juggernaut fueled by some artifact mana (maybe Black Lotus was involved?), and I responded with a Forest and a Folk. My opponent untapped, read my card, shrugged their shoulders, and traded their Juggernaut off. I went on to win that game and the match. It was to be my only win of the day as I stared at Marhault Elsdragon in hand with all my lands in the graveyard round after round, but after that first match I hooked on Magic for life.