I’m excited about the Core Set 2021 previews that have come out so far. It looks like Wizards of the Coast (WotC) really juiced this set with a lot of exciting reprints, Grim Tutor and Azusa, Lost but Seeking among them. A lot of the new cards look exciting to play with as well. If Mangara, the Diplomat is an indication that WotC will give card draw to white as part of a tax mechanic, I’m all for it!

However — and take this with a grain of salt — there’s one part of this set that is making lives difficult. This is specifically the issues surrounding the number of variants on Teferi, Master of Time.

There are nine distinct versions of Teferi in Core Set 2021. All nine are functionally identical, but each of them has distinctions to make them their own unique artwork. These are:

How Often Does Teferi, Master of Time Appear?

Mike Turian’s article “Collecting Core Set 2021” is a great resource for knowing what type of cards appear in which pack, and how often they show up. I appreciate Mike Turian taking the time to clearly write these out!  However, this article doesn’t answer the question, “Do all versions of Teferi, Master of Time appear equally?”

At least for the Showcase/Borderless Frame cards, I think I have a pretty good guess. The precedent for this is Unstable. When Unstable was released, several cards came in multiple variants but had the same card name (Very Cryptic Command, Extremely Slow Zombie, and the like). Each non-specific variant of the card had the same normal odds of appearing in any given pack, but each sub-variant was split within that slot. 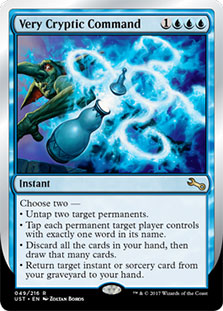 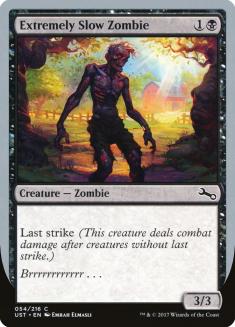 I don’t have confirmation of this, but it’s likely that the printings of Teferi was handled similarly for the Showcase / Borderless Frame sheet seeded into Draft Booster Packs.  According to Mike Turian’s article:

This breaks down to the following cards:

A Magic print sheet has 121 cards.  This works out in this case to:

This would put it at 120/121 cards on the print sheet. Traditionally the 121st slot could be a filler card (the blank cards that sometimes end up in your packs but are supposed to be thrown out), an overprinting of one card on the sheet (so a rare would be on the sheet nine times rather than eight), or a card that belongs to another slot entirely (for instance, the uncommon that they are shifting to rare for the reprint Borderless slot).

This also means that a sheet of 121 cards would have the following Teferi breakdown:

In the end, the gross number of Teferis would be the same as any other mythic on the sheet, but the individual variants (#290, #291, #292, #293) would all individually be four times more rare than any individual other card on this sheet.

Wait! How Many Types of Teferi, Master of Time Are There?

So right off of the bat, there are nine printings of Teferi, Master of Time in Core Set 2021 Draft Booster packs. WotC has also said that each variant is going to come in foil. This doubles the number to eighteen total printings.

Each of these languages will have versions of each of these cards, so now we are looking at eighteen printings in eleven languages (9 cards x 2 foilings x 11 languages) for a total of 198 different printings of Teferi that will be released at the time that Core Set 2021 comes out.

There are also two other ways to get printings of Teferi — Prerelease Stamped and Promo/Planeswalker Stamped versions. Traditionally, both of these versions have not included versions of the Alternate Frame, so Teferi #290-#293 (Showcase) and #281 (Borderless) would not have these variants. However, it’s unclear if all four variants of the regular version will show up with Date Stamps and Planeswalker Stamps.

Did I mention all of these promotional versions are also available in all eleven Magic languages? And that the Planeswalker Stamped versions are in foil and non-foil?

To put this in perspective, Lightning Bolt is one of the most-reprinted cards in Magic. It was in Magic’s first set ever (Alpha) and has been reprinted as recently as last year (Mystery Booster). If we look at the tournament-legal official printings of Lightning Bolt (so no Summer Magic, Collectors’ Edition or the like), we come up with this number:

Is This a Good or Bad Thing?

Now here’s the part where you can draw conclusions about what this all means. There are two ways of looking at this many Teferi variants coming out at once:

In the end, I fall more into the first camp than the second. I think that many people overlook that having this many variants of a card all dropping at once serves to drive down the price of the card in general. Yes, there are going to be specific versions that command an astronomical price tag (Russian Foil Showcase Art individual variants, anyone?). But based on how the multiple variants have worked out in the past (see: Theros Beyond Death Gods), the price of this card will be lower than if multiple variants didn’t exist.

So, if you just care about picking up any version of Teferi, Master of Time to play with, this is a good thing. The price of the most affordable version of the card will be lower than it would be if there were fewer variants.

But If you care about collecting everything Magic has to offer, you have my condolences. You and our warehouse team (which will have to figure out all 231 or 330 variants) can both sob uncontrollably in the corner as I tell you, “Everything is going to be all right.”