In considering the top cards in Core Set 2021, one thing that really stood out is how all the cards I’m most interested in are general-use tools rather than build-around cards or outstanding Uro, Titan of Nature’s Wrath-style bombs.  That means there are lots of different ways to build decks that use any of them and they generally feel more like small upgrades to a strategy that could exist without them.

Today I’ll look at building decks to show how these cards can be used, but I want to highlight that, since these aren’t cards like Sorin, Imperious Bloodlord that go in exactly one deck, this shouldn’t be read as the final word on how to play any of these cards, just an example of how they can be used.  Also, a lot of these cards will show up in multiple decks, for similar reasons. 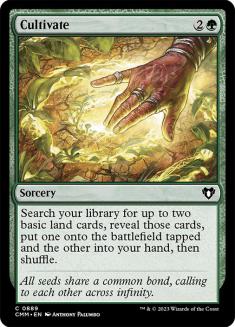 Cultivate might be my favorite ramp card ever.  As a combination between Rampant Growth and Divination, it encourages less explosive, more fair big mana decks.  I also really like the way that it functions as color fixing, allowing for interesting splashes and playing additional colors, but in a way that still requires restraint and care in building your manabase.  Cultivate might let you play Niv-Mizzet Reborn, but it won’t let you play Time Wipe with Casualties of War without a lot more help.

It’s in an awkward spot because it’s nowhere near as strong as Uro, Titan of Nature’s Wrath, but they do play well together, and it can also shine in decks that don’t have blue mana. I’ll come back to Cultivate in other lists, but I want to start with a deck that really leans into both the ramp and mana fixing of Cultivate.

This deck is just trying to build up mana so that it can chain through spells with Song of Creation to win by decking itself with Thassa’s Oracle or Jace, Wielder of Mysteries.  Song of Creation prevents you from holding Thassa’s Oracle in your hand until you can win the game with it, but Tamiyo, Collector of Tales, which is excellent at tearing through your library, can pick it up when you’re ready. 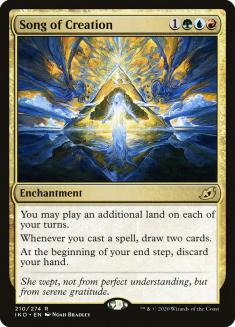 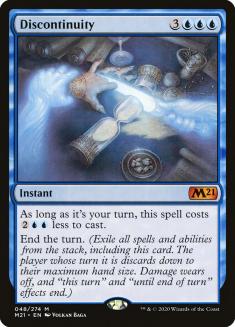 All in all, I’m a little worried about the interaction available for this deck and not sure it can really win quite quickly enough, so it might need some kind of alternate plan like Ominous Seas, but getting a strong, reliable ramp spell that can fix your mana for less than four mana is a big step in the right direction for this kind of deck.

It’s also worth noting that, between Cultivate finding Islands and the addition of the Triomes, Mystic Sanctuary is looking a lot more realistic in Standard than it looked when Throne of Eldraine was first released, so I’d definitely keep an eye out for opportunities to take advantage of that. 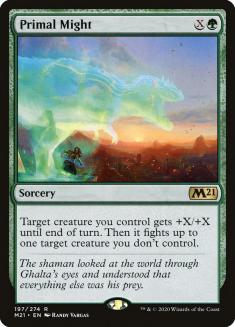 Primal Might is an awesome card.  I think it’s hard to register just how strong it is because it’s so rare that fight effects have been good enough for Constructed, but this is just so much better than similar cards that it’s hard to compare.  This could bring Naya Feather back into the metagame, can really prop up any of the existing Mono-Green archetypes, and should generally offer a good removal spell to any creature-heavy green deck.  I’d like to highlight a fun linear creature deck that’s probably not good enough, yet is remarkably close.

Hooded Blightfang is interesting because its ability is so explosive offensively, but deathtouch creatures don’t typically have very aggressive stats.  Still, that effect has been strong enough to carry four-mana creatures, so it’s worth paying attention to at three mana, and while this deck uses some fringe creatures, none of these are cards that haven’t seen play before. 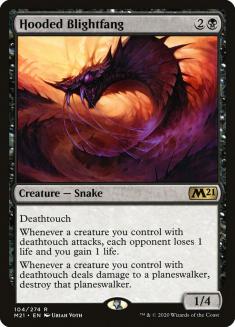 The four-mana cards in this deck all seem awesome, and I like that this deck is capable of taking advantage of deathtouch as an excellent ability with both fight cards and with trample.  The synergy with trample is strong enough that it’s possible that Gemrazer should find its way into the maindeck, possibly over some number of Orzhov Enforcers.

Another consideration that would play really well with Gemrazer is the addition of Embodiment of Agonies. 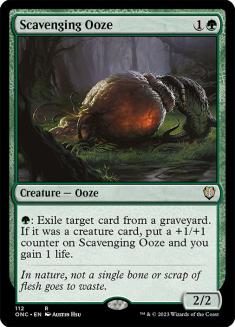 A strong reprint with a history of success across every format where it’s legal, this is an interesting addition to Standard.  On the one hand, there are tons of powerful cards in Standard that it’s excellent against and it should be a very important addition to the metagame. On the other hand, no one’s really playing the kinds of decks Scavenging Ooze typically shines in, which raises some questions about whether such a deck can exist in the format.

This is a nice, straightforward midrange deck that really takes advantage of the card advantage offered by Llanowar Visionary and Cultivate to incorporate ramp/big mana elements into a midrange deck that often might not be available to such a strategy. It’s hard to play a lot of one-for-one removal spells with a lot of mana due to the risk of flooding out, but since the ramp spells generate card advantage and the top-end is so powerful, this deck can easily merge the two into a package that seems to have a lot of potential.

Nissa, as always, is another big part of combining these strategies, as it’s both a great threat and a way to ramp to Ugin, but certainly a lot of the strength is this deck is in the potential for Turn 3 or 4 Nissa, which, as always, is very likely to run away with the game.  On a related note, it might be worth playing some Triomes to increase the chances that you can play Nissa and use its ability to follow up with a Heartless Act or Eliminate. 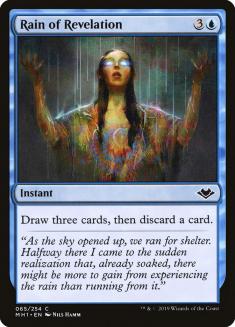 I doubt this card is anywhere near the top of anyone else’s rankings, but Rain of Revelation is an extremely powerful draw spell.  Drafting Modern Horizons, it was never really clear to me whether this was stronger or weaker than Fact or Fiction, and I basically concluded that they’re very similar.  Fact or Fiction was among the most-played and significant cards when it was in Standard, and we haven’t seen its equal since.  Threats are a lot stronger now than they were then, but I think it’s important to consider the kinds of decks this could open up.

Historically, Rewind has always looked weak to me, but I really like the idea of buying time to cast Rain of Revelation or to slam a Nightpack Ambusher by countering my opponent’s play on Turn 4 or 5 and freeing up my mana.

Frantic Inventory is another card that really appeals to me in principle, but in practice I worry that it’s too slow and low-impact. Still, this deck is designed to see enough cards that you’ll get to the big payoffs, and you can discard your first copy to Rain of Revelation.  What really makes the card shine for me is the interaction with Tamiyo and Mystic Sanctuary, allowing you to benefit from a two-mana draw-three or draw-four multiple times in the late-game.

Balancing interaction between countermagic and discard with this kind of deck can be tricky, but I think Rain of Revelation is a great tool to support building decks that attempt to make more one-for-one exchanges, which would potentially bring the metagame back to a point where playing a small game matters.  Between this and the addition of Ugin, the Spirit Dragon, we could see a major resurgence of true control in Standard.

Reanimation, including planeswalker (Ugin) reanimation, is another strategy to keep an eye on that Rain of Revelation perfectly supports.

It feels weird to call this out as another card to build around after including it in most of my other decks as well, but we can’t really ignore the elephant in the room here — Ugin, the Spirit Dragon is likely the most impactful card from Core Set 2021.

I was drawn to this shell because I think the current deck is strong and Mazemind Tome and Solemn Simulacrum are both fantastic with Yorion, and both naturally lead to the deck getting more mana, making Ugin an easy addition.

If you wanted to make Ugin an even bigger focus of the deck, you could potentially play Liliana, Waker of the Dead and four copies of Elspeth Conquers Death. You could then try to use Liliana to discard Ugin and Elspeth Conquers Death to bring it back, ideally after Liliana has cleared your opponent’s hand of answers.

I believe there have been statements from Wizards of the Coast that what we’ve seen in recent sets is typical of what we can expect their targeted power level in Standard to be moving forward, barring a few exceptions that crossed a line. The thing is, in Magic, those most powerful exceptions define formats, so “this power level, minus the top X cards” is a difficult statement to really understand. My hope was that, even while making that statement, they didn’t fully appreciate how powerful some of the cards they’d released were (I’d like to think that if they did understand, they wouldn’t have printed them).

My hope is that Core Set 2021, which I see as a big step back in power level, is the new normal, but I kind of fear that at this point, no one really knows if it is or isn’t.