Historic is not the same format it was just a couple days ago. In terms of foundational cards, the balance between Strixhaven’s Mystical Archive and Jumpstart: Historic Horizons is extremely close. That’s a wild statement to make when we’re talking about a set that added literal Brainstorm to the format and has already produced multiple bans, but I’ve got an even wilder one on deck for you.

It’s possible that Jumpstart: Historic Horizons has even more potential than the Mystical Archive to break the Historic format. Sure, Brainstorm empowered blue to a ridiculous degree, but it was always just a means to an end. Jumpstart: Historic Horizons contains some cards that take the general rules of Magic: The Gathering very lightly. High on that list has to be Throes of Chaos — a card which elevates doing nothing to an absolute artform. In conjunction with Tibalt’s Trickery, this card gets up to some real nonsense, and not in a way that creates appealing games of Magic.

And yet, this isn’t even the most broken interaction in the set. 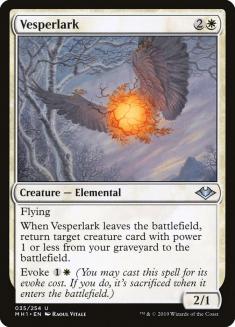 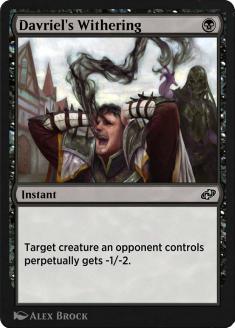 Davriel’s Withering targeting your own Vesperlark moves the Vesperlark from the graveyard to the battlefield as many times as you would like (and potentially more, forcing you to draw games where Vesperlark is your only returnable target and you aren’t benefitting from the loop), meaning that any kind of effect that triggers upon the death of a creature or the entrance of a creature to the battlefield is going to do its thing to the nth degree. A three-card creature-based combo isn’t the most appealing setup in most scenarios, but Davriel’s Withering is just a solid removal spell in the Historic context, and with enough work in deckbuilding, Vesperlark can carry its weight as well.

From the second these two cards were previewed, I started wracking my brain about how to best abuse this combo, and I’ve got no shortage of lists to share with you today. I’m presenting these decks in the order I developed them, as so many of the missteps along the way were critical for getting to my later (and probably best) versions. Even the earliest and weakest links here have potential though, and if you see an idea that catches your eye, I encourage you to work on refining it. I’m not sure how long we’ll get to play with Davriel’s Withering in its current state, but I’m already committing to playing with it until they take it away from me.

Honestly, I expected my job with Vesperlark to be simple. Pre-existing Abzan Company lists focused on Bolas’s Citadel were out there, and the combo slotted in alongside the Prosperous Innkeeper and Blood Artists you wanted to play anyway. The core problem here was a squeeze. Basically, it’s impossible to keep your creature count high enough to be able to Collected Company reliably while still maxing out Davriel’s Withering and Bolas’s Citadel. My first versions of the deck tried to get away without Collected Company, but even a known Collected Company-hater like myself must admit that playing pure creature combo without the card is somewhat silly.

I tried doing weird stuff like playing a bunch of Kazandu Mammoths and Tangled Florahedrons, but untapped lands were just too important. Unsatisfied with a pure combo approach, I drifted towards hybrid aggro decks for a while.

With black and white as required colors, beatdown options are kind of thin. I turned my attention to a Mardu Vehicles-type take, based mostly on the idea that Bomat Courier, Esper Sentinel, and Thraben Inspector could serve up early beats while still generating the card advantage that ultimately would carry us towards the Vesperlark combo.

This mostly worked, but the beatdown draws were extremely anemic. Not only were most of our creatures small (with the sometimes exception of Nettlecyst), but Corpse Knight, Blood Artist, and Vesperlark are just not the best way to put your opponent on the back foot. If the artifacts were mostly there for card advantage, maybe blue cards could support that plan even more efficiently.

Again, I abstractly love this deck. It has extremely powerful Emry, Lurker of the Lochs (which can be returned by Vesperlark) and is also getting access to recursive Soul-Guide Lanterns. Soul-Guide Lantern is a critical part of the metagame right now, but unfortunately our Vesperlarks prevent us from ever getting access to a companion Lurrus. Finding a different way to buy back Lantern is clutch, and if you’re ever in a spot where you’re rebuying Thought Monitors, the game is all but over. 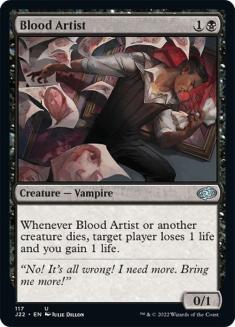 This deck was about the time I started to get really sick of Blood Artist. Not only was it negatively impacting our critical artifact count, but it also just wasn’t a very good card in the context of anything this deck was trying to do outside of the combo. I needed all parts of my combo to be useful cards in my deck if I was going to make a metagame defining archetype. Maybe actually winning with the combo was just a fool’s errand?

This is where my decks started to get extremely solid. We can grow our Ajani’s Pridemates or go off with a Heliod, Sun-Crowed on the battlefield and end the game in a turn, but we’re also weirdly okay with just gaining as much life as the Magic Arena interface will allow.

Ranger-Captain of Eos is a perfect companion to the Vesperlark combo once you start relying on Soul Wardens instead of Blood Artist. It’s both finding and protecting the combo, to say nothing of the two pips it provides towards making your Heliods live.

While this deck was finally executing the bifurcated gameplan I thought the archetype was capable of, its relative lack of card advantage made it a little harder to combo off than I would like. I was ready for a tribe that would allow me to draw all the cards I could ever want.

Not only were the Undead Augurs and Cryptbreakers a breath of card advantage-based fresh air, but I also picked up a secondary infinite combo for the first time. Liliana, Untouched by Death in conjunction with Shambling Ghast and Davriel’s Withering does a fine Vesperlark impression, and Liliana, Untouched by Death is a real-ish card in a deck loaded up with Zombies.

The disappointing side of the deck was that the beatdown plan was spiraling back towards anemic. I considered the various Zombie lords available, but those cards are just not a suitable power level for Historic. In fact, I was thoroughly fed up with the vast majority of my opponent’s cards just outshining mine on a one-for-one basis in all these decks. Why couldn’t I just play Vesperlark combo alongside the good stuff in the format?

This deck worked, but very little of it had anything to do with having a coherent plan. I just had the good cards now. Sure, there’s some nice overlap with Vesperlark returning Dragon’s Rage Channeler and Dreadhorde Arcanist, and those Dreadhorde Arcanists love firing off Davriel’s Witherings for a second time. Again though, we were back to some abysmal Blood Artists. A deck like this can be good, but it can never be great. The great decks are seamless, and everything just flows.

I was getting frustrated, and it felt like I was chasing my tail. So I went and spent some time in the woods by my house. I sat beneath the oaks. I watched the squirrels frolic amongst the canopy. And clarity finally struck.

Nah, I made all that up. As usual, I just sat scrolling through Twitter all day and eventually stumbled on someone talking about a Scurry Oak / Heliod, Sun-Crowned combo deck. I stole the package for my Vesperlark deck, and the rest will eventually be history.

This deck is the truth. Vesperlark is now functioning as both a potential combo piece and a step towards inevitability. Does your opponent risk leaving a Vesperlark on the battlefield to get comboed at instant speed, or will they kill it and allow you to return the Soul Warden that will eventually make infinite Squirrels with your Scurry Oak? Maybe you just use that Vesperlark to rebuy a Fiend Artisan and end up with a legitimate beatdown squad. Or the Fiend Artisan will go searching for the combo piece you need. Of course, all of this can go down at instant speed with the help of Collected Company, which finally has a suitable number of targets.

Heliod, Sun-Crowned plus Scurry Oak is such a squeeze. I’ve blocked in perpetuity by giving my Squirrels lifelink and creating a new one every turn. It makes your Heliod activations a viable mana sink, all of which is backed up by multiple “Oops I Win” combos. This deck has zero fear of burning resources to survive early. It rebuilds easily, often in unexpected ways.

I don’t know how this list reads on paper. I’m telling you though, go play it. This is the creature combo deck that the Historic format has been missing, and if you work to refine this archetype, I expect you will be rewarded. Maybe Tibalt’s Trickery nonsense or Dragon’s Rage Channeler eclipses Vesperlark and friends for a little while, but these creature-combo decks will be long-term players in the Historic format. The pieces are simply too good to deny.