In the arms race between Wizards of the Coast (WotC) releasing new products and my wallet to keep dumping money into said products, I will say confidently that I’m losing. The last six months have been brutal, as it seems like every time I have a handle on things, a new Secret Lair comes out, making some random staple I’ve been pining for suddenly affordable.

Let’s just say that Artisan Commander came into my life at the perfect time.

A variant of Magic: The Gathering’s most popular format, “artisan” simply means you can only build with cards that have been printed at common or uncommon. That doesn’t necessarily mean budget decks, which I’ll cover shortly, but it sure takes the pressure of constantly needing to find the latest, greatest card and break the bank. In fact, if we look at every Standard-legal set, there are only thirteen commons or uncommons worth more than $1. 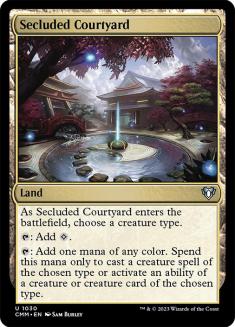 In terms of spending money in 2022, it’s probably easier to drop a ton of it on ringtones than it is upgrading your Artisan Commander deck when a new expansion releases.

I’d also laud the ability to brew your own madness in a format that isn’t plagued with decks that belong in certain tiers, like Ad Nauseam, or with commanders that have been explored ad nauseam. It’s a small, cool community that gives you room to be creative. If that’s not what you’re looking for in a game of Commander, this might not be for you. If you like creating your own secret menu items at fast food places, read on.

Since Artisan Commander relies on whether a card has ever been printed below rare, the stumbles of an early design team give us some absurd cards to play with, especially in blue. Mana Drain, Power Artifact, Transmute Artifact, Force of Will, Personal Tutor, and Mystical Tutor were all printed at uncommon. Staples like Rhystic Study and Mystic Remora were originally commons. Isochron Scepter and Dramatic Reversal? Go for it. Sensei’s Diving Top and Counterbalance? Yuck. It’s fine. 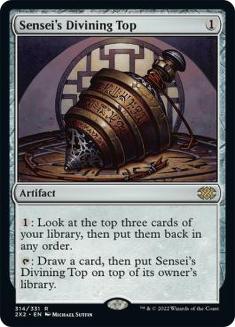 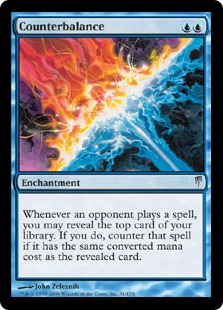 Their Discord has a channel that’s just #bonkers-legal-cards.

Once you get past the initial shock (“I can play how many tutors?”), it actually opens you up quite a bit from default deckbuilding choices I find myself guilty of making lately. Building a manabase gets a little more difficult in terms of lands, not to mention Nature’s Lore not fetching the goods like it used to. Fast mana auto-inclusions like Jeweled Lotus or Mox Anything are summarily dismissed. Safety blankets like Teferi’s Protection or The Great Henge are ripped away from me, the big baby.

Most importantly, we’re working at uncommon for our commander. Are you trying to draw all the cards with Simic Tatyova, Benthic Druid, or are you giving a more aggressive Rakdos deck a try with Kardur, Doomscourge or Juri, Master of the Revue? Maybe you’d rather just try to get silly with Syr Konrad, the Grim and go mono-black. Cormela, Glamour Thief from Streets of New Capenna gives you an option to go three colors and sling some spells. Compared to most games I play, these are relatively unexplored options that will give you food for thought.

It’s also a perfect time to sling some Backgrounds, with Commander Legends: Battle for Baldur’s Gate (CLB) giving us a slew of interesting new uncommon options that come with a free enchantment. While they feel noticeably underpowered in even the most casual of Commander games, I think they fit a niche here and can make those CLB boxes feel a little less sadge.

In terms of uncommon commanders, I’ve been eager to cook something up with Rocco, Cabaretti Caterer since they started whipping up pastries in New Capenna. I’m not huge on playing tutors, something my buddy Cory beat into my head when I was new to the format. It makes games feel more like Draft when you’re always playing the same cards.

In the most casual of formats? I figure, let’s have some fun. When I was a kid, my mom always took me to the cheap theater that showed second-run movies so that we could get an extra large popcorn. The same rules apply here. I’m also going to jam an Imperial Recruiter (uncommon in Portal Three Kingdoms) and a Worldly Tutor I picked up at CommandFest Richmond in here.

Since we’re already being extra, I wanted to see just how many infinite combos I could toss in here. Going through my untagged list, I legitimately couldn’t remember all of them. RIP Myr Retriever, which I’m sure worked with something. I’m still not sure exactly how many are in here, but I know it’s more than ten. Let’s run over a sampling. 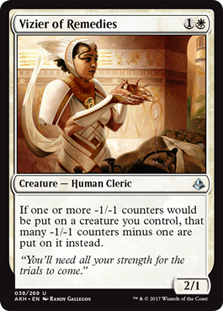 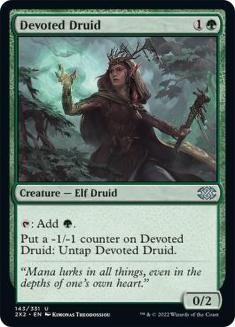 Vizier of Remedies works with a number of our persist creatures, but Devoted Druid doesn’t require a death to do bad all by itself, giving us infinite green mana. If we draw either half, we can simply tutor for the other with Rocco, which we love to see. 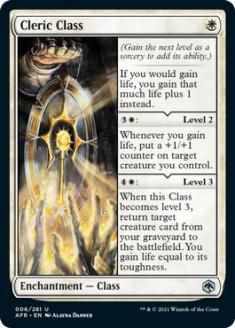 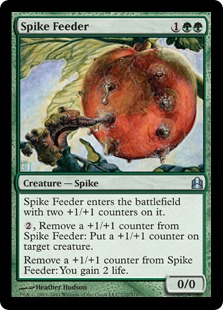 I’m not sure how much infect is running around the meta, but we’ll find out once we gain infinite life with this little sweetie. With a Cleric Class on Level 2, we get a Spike Feeder onto the battlefield through various means and remove a counter from it to gain a couple life. That triggers Cleric Class, allowing us to repeat for more than a few spindowns. 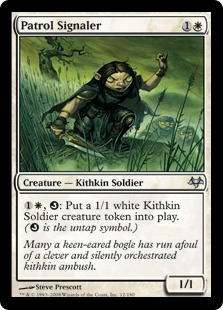 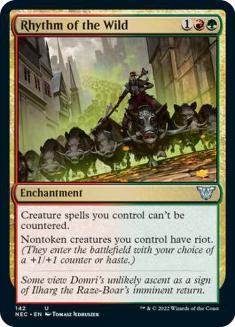 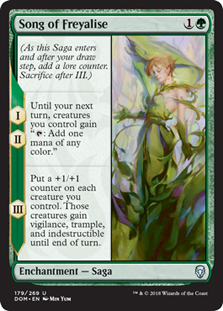 You know we wouldn’t be comboing off without an untap symbol in here. With a Rhythm of the Wild and a Patrol Signaler on the battlefield, we cast Song of Freyalise to turn our creatures into Birds of Paradise, Then, we simply need to tap our little stabby friend for one mana and create a 1/1 Kithkin Soldier token that also taps for mana, untap stabby, and repeat. If we have an Impact Tremors or Goblin Bombardment on the battlefield, we don’t even need to stress about being able to untap. 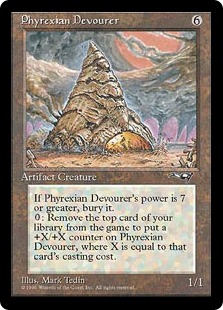 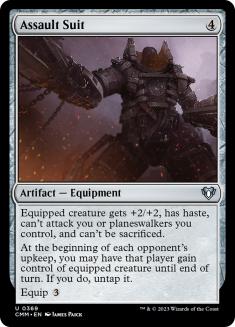 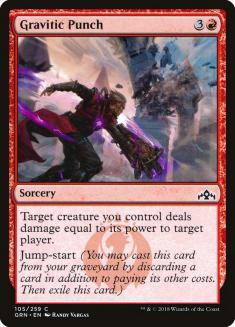 You knew these were also going to get super-convoluted, so let’s dig in. For six mana, we’re busting out Phyrexian Devourer, a card that lets us exile the top card of our library for free and add the card’s mana value to our 1/1 in the form of +1/+1 counters. While there is a clause that causes us to sacrifice Devourer if its power exceeds six, we can slap an Assault Suit on to prevent that from triggering. So then what? It seems pretty easily chumped, right? Gravitic Punch (plus some jump-start) can then go to the face of a pair of opponents for the low, low cost of eight mana and something to discard. Seems like a steal. 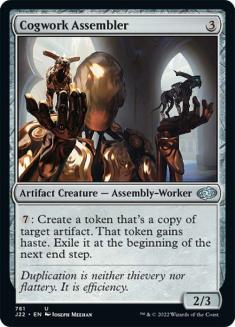 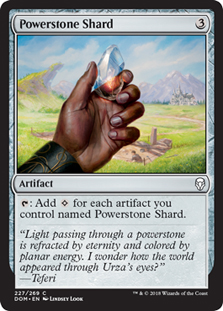 I have to admit that if this ever happens, I need to retire the deck. Ostensibly, we need access to 21 mana before we’re able to create infinite additional Powerstone Shards, which then allow us to make infinite Cogwork Assemblers. Maybe this is what the Myr Retriever and Krark-Clan Ironworks were for? I’m legitimately unsure. I just don’t see this happening in my lifetime, like hoverboards, but maybe it’ll do a decent impression of one, like a Lime Scooter.

With Double Masters 2022 downshifting a number of powerful cards, I likely need to retune the final list, but take a look. We still have access to some solid interaction, utility creatures, and lots of combo. Probably too much combo. The nice thing about Rocco is that drawing any of my enablers (such as Light of Promise or Careful Cultivation, for example) makes the tutoring part easy. Now, I just need a cheat sheet for what exactly I’m trying to do all the time.

Have an Artisan Commander deck built? Hit me with your list so that I can see what you’re up to (and how you’ll disrupt my combos) on Twitter or in the comments on Facebook.