Earlier this week, a leak gave players a first look at Atraxa, Grand Unifier – a new card from Phyrexia: All Will Be One – that included mention of what was assumed to be a new card type: battle. 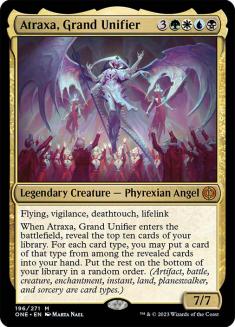 Today, Magic: The Gathering’s Head Designer, Mark Rosewater, has confirmed via his Blogatog that battle will be the first new card type added to MTG since planeswalkers in 2007.

While Rosewater did not provide any additional information on how battle will function, he did confirm that despite not being listed as a card type on the new Atraxa, tribal is indeed still a card type.

So what do you think battle will do? Will it change Magic as drastically as planeswalkers? Let us know your thoughts in the comments on Facebook and Twitter.

Phyrexia: All Will Be One is scheduled to release on February 10. View our official preview gallery.