With the full set of Dominaria United previewed, I wanted to cast my ballot for the Prom King and Queen (best cards) of Dominaria United Limited. Limited formats are always captivating to watch evolve as players figure out what works and how to beat what works. In this article, I will list my candidates for the best commons and uncommons of each color, as well as provide some context and elaborate on my thought process behind it. Buckle up; we will be joining our new neighbors, the Phyrexians, for dinner. 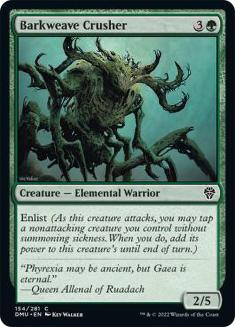 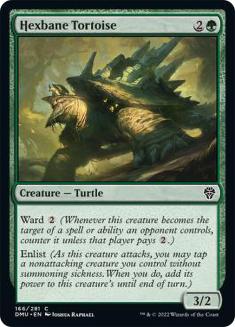 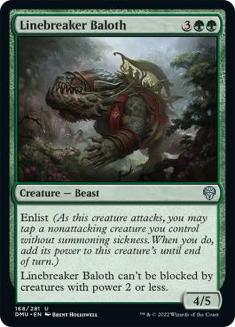 I need to get some housekeeping out of the way before we dive in! In last week’s article, I had predicted that, in addition to white and red, black would likely be the third color (if any) to receive the enlist mechanic. Well, on Dominaria, greens Elementals, Turtles, and Beasts (oh my!) are scouting for new recruits. All three colors of the Naya faction feature two common creatures and one uncommon creature with the enlist keyword, and that’s the kind of balance that makes me think that Dominaria may pull through this whole ordeal after all. 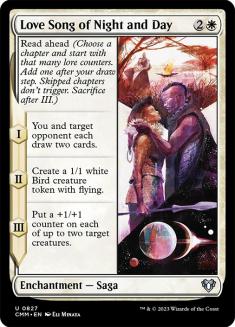 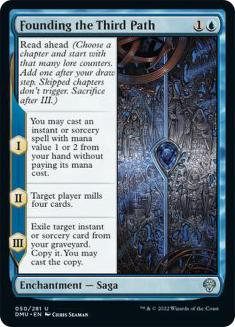 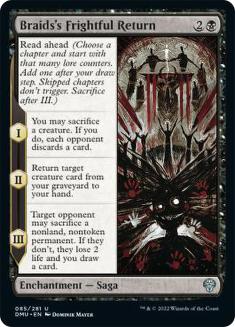 The second thing to address is that saying “Braids’s” (see the above black Saga) out loud makes me more upset than it should. [Copy Editor’s Note: Take it up with Chicago.]

The last thing to address that I failed to mention in the previous article (still not as important as “Braids’s”) is the new mechanic present on all Dominaria United Sagas, read ahead. I love a descriptive word or phrase, and read ahead lets you start your favorite Saga at any chapter you wish!

This revolution let me make eye contact with Love Song of Night and Day for the first time in days. This is a very simple, yet innovative twist on the historically linear experience that grandpa’s Sagas provided. With the new technology, we have a lot more autonomy in how our story will be told. Each color has one uncommon and one rare Saga. Green’s ‘rare’ Saga is actually a mythic rare because… trees. I think these will still be popping up in drafts enough for you to read ahead and choose your own adventure when you see them!

There are two uncommons for each of the ten of the two-color combinations (Azorius, Orzhov, Selesnya, etc.). I will be writing a separate article diving into the archetypes more thoroughly. First, though, I want to provide a little context that will help illustrate the game plan of each guild. 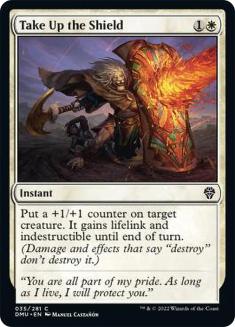 Last week, I had Take Up the Shield as a front-runner for best white common. Now that I’ve seen the rest of what Dominaria United has to offer, I’m still on this being the chosen one. To avoid too much repetition, feel free to read my early take on it here. Instead, let’s talk about a couple of other stand-out white commons. 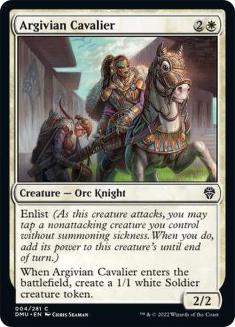 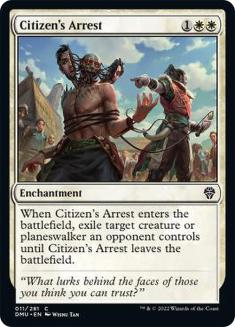 These runner-ups are definitely nothing to scoff at. Argivian Cavalier gets you 3/3 worth of stats for three mana, with enlist split between two bodies and a cherry on top. That’s a lot of descriptors, and white wants all of them! Well, maybe not the cherry. This is white’s premium creature option for every deck. Citizen’s Arrest is premium common removal, reminiscent of Oblivion Ring. The downside is the double-pip mana cost of 1WW. I would guess that the majority of white decks will aim to be two-color aggro machines that won’t stumble too often. 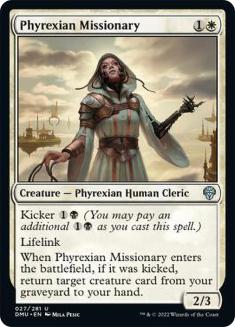 I guess Phyrexian Missionary is what happens when you combine Steadfast Paladin and Gravedigger, and I’m a fan. This card seems insanely strong and equally annoying to play against. The 2/3 stat line on a two-drop tends to be very difficult to deal with – yes, I’m talking to you, Viconia, Nightsinger’s Disciple. But let’s up the ante, and throw lifelink on it. The floor of what I just described is a very strong Limited card – but that’s not all, tell them what else they’ve won! A brand-new car!! In the shape of a previously living comrade… that you can’t drive. This is a first-pick card. 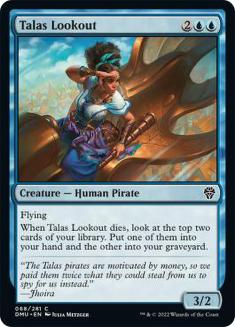 Move over, Expedition Diviner. Wizards are so fetch, anyway. This Pirate’s on the lookout for some of that sweet, sweet booty. Looking at two cards and picking the better one on death is pretty huge as well (in addition to the other card going to the graveyard). This card seems overall solid for every deck. A word of caution; this card has the potential to be a little slow, so don’t just play all six copies you got without some early-game resilience! 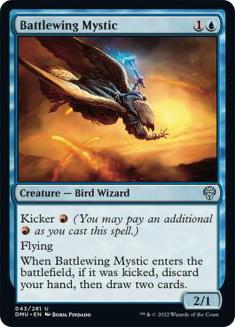 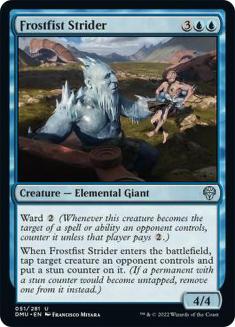 Blue has a few solid uncommons to choose as a front-runner, but they are all very different. Battlewing Mystic seems like an awesome card for most decks, and can be great in an aggro or Izzet deck. Frostfist Strider (Chillbringer’s uncle) is an all-around great card as well. You’ll be happy to play him in aggro and control decks alike. Shout-out to Rona’s Vortex because it just seems like another solid option. 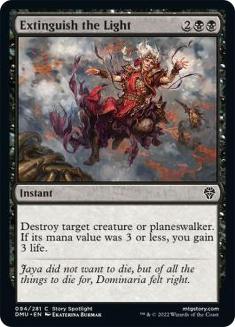 “Jaya did not want to die,” but her mana value was too low. Yes, you will technically always have to trade down on mana with this kill spell, but it is instant and gives you three life for your trouble. Black has another solid spot removal for small threats in Tribute to Urborg. I also need to tip my cap to ol’ reliable Phyrexian Rager – rage on, little buddy. 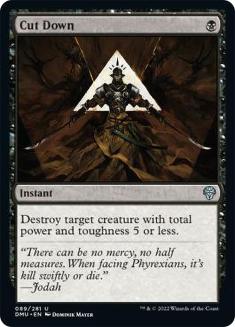 What a surprise, another black removal spell. Well, to be fair, it is one of the coolest removal spells I’ve seen lately, another innovative tweak Wizards of the Coast (WotC) slipped in. We’re familiar with the many iterations of power/toughness permission-based removal spells like Smother, Collar the Culprit, etc. But to the best of my knowledge, I don’t believe we’ve seen permission-based removal check the total between the two. Though the likelihood of me learning about three similar cards mere minutes after this is published is significant, I just think it’s neat.

Nonetheless, at the low, low, low cost of one mana, you can kill a lot of different things, including almost all one- and two-drops, a good amount of three-drops, and some other random innocent Dominaria taxpayers going about their business. 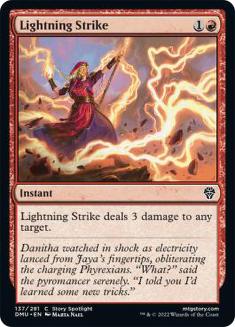 Sure, it’s no Lightning Bolt – we may need to wait another decade for the power creep to let that back into Standard. But in the year 2022, this is top-notch red removal. You can hit creatures, planeswalkers, and faces! This looks to be one of the best commons at the moment, and I’d have no qualms first-picking one! 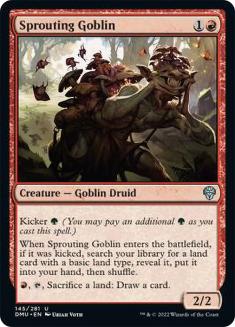 We’ve seen our fair share of Goblin Shamans, but a Goblin Druid? The second of its kind, after Owlbear Shepherd, and the first in a Standard-legal set, I guess Jeff Goldblum was right: “Life, uh, finds a way.” Three mana for a 2/2 that can get you another domain piece or the mana-fixing you need seems like a fantastic deal.

Two for a 2/2 is pretty standard in today’s economy, but sacrificing lands to draw cards is the part that I’m interested to see in action. Not only is this Druid great for the Four-Color decks that can be prone to flooding, Sprouting Goblin also seems like a great inclusion in most aggressive or midrange builds. Tired of drawing lands? Well, throw those in the trash and try not to draw another one!

This provides the more aggressive decks some inevitability. For the low, low price of destroying Dominaria’s historical natural resources, you can draw two cards a turn – that’s right, two cards in one turn! Shout-out to Electrostatic Infantry, because it will inevitably derail some of my drafts in a quest to get a screenshot of a 10/10 Dwarf Wizard. Also, shout-out to Twinferno for the obvious reason of having a sweet card name. 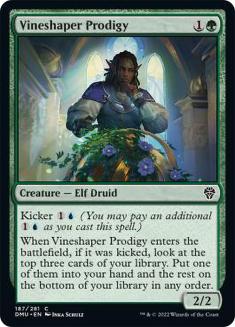 I had Vineshaper Prodigy pinned as a likely candidate for the best green common last week. It’s not quite Organ Hoarder, but this green-thumbed virtuoso is going to grow on you. Splashing will be particularly easy in green, so don’t think you need to be Simic to let the Prodigy shine! 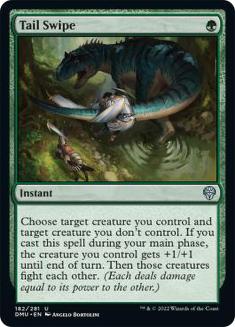 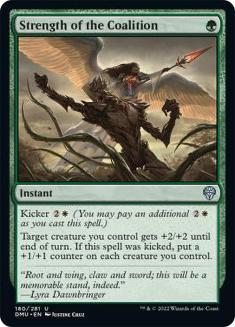 Dominaria United has lots of great tricks, and I’m extremely excited to see how they all will play out! I think Tail Swipe is the first universal one-mana instant-speed fight spell? I have a proclivity for one-mana tricks or kill spells because they cost less than the two mana that so many players look for.

Speaking of, Strength of the Coalition seems insane in Selesnya. It’s a fine pump spell in its own right, so these will get snagged early, but if you get this card in the true Selesnya go-wide deck – send me a screenshot of the carnage! There are a lot of other great green uncommons like Tear Asunder, Nishoba Brawler, and The Weatherseed Treaty that should not be overlooked!

Please join me in celebrating our 2022 nominees of Dominaria. I will be dropping an article on Friday, exploring the role-players and overarching synergies to help you get an early edge this weekend! I know I will be attending a physical Prerelease this weekend, and I’m certain I won’t know where to put my mouse…