While preview season has already marched on past Commander Legends: Battle for Baldur’s Gate, don’t get so distracted by the upcoming shiny new reprints from Double Masters 2022 that you neglect digging into Baldur’s Gate!  The set is rich with all kinds of cool new cards for Commander, and I haven’t been so driven to explore and build new decks in a long, long time.  You may have even overlooked that we got not one, not two, but three new planeswalker cards that can be your commander! 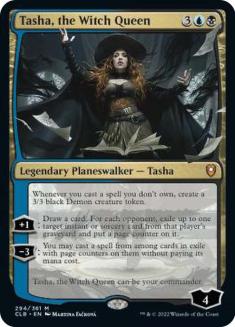 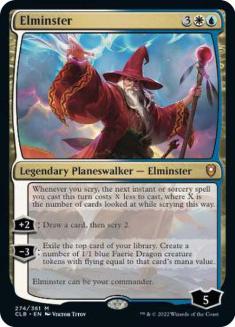 The original Commander Legends only had two of them, Jeska, Thrice Reborn and Tevesh Szat, Doom of Fools, but having the partner mechanic certainly made them interesting. The three new ones are more in line with the multicolor commanders that are so popular in Commander, and I think all of them make for interesting commanders to build around.  This week, I’d like to dive into Tasha, the Witch Queen!

Tasha’s goals are straightforward: cast spells you don’t own and create a 3/3 black Demon token each time you do with Tasha’s static ability.  Each of Tasha’s loyalty abilities can help set that up, but the Dimir color combination has a ton of other spells and abilities that let you cast your opponents’ spells to help further crank out Demons.

I’m personally not a big fan of milling strategies in general and especially in Commander, but I do really like the approach to milling that Tasha, the Witch Queen suggests.  Instant and sorcery spells will naturally end up in players’ graveyards through the natural rhythm of a typical Commander game, but adding just a smidge of milling cards can help stock graveyards with more juicy targets.

While the Demons you make with Tasha can help protect Tasha from ground-based attacks, we’ll want to find some other ways to keep her around too.  Creatures with deathtouch like Baleful Strix are a great choice since they heavily discourage otherwise powerful attackers that opponents won’t want to die. Cards that bring monarch to play are helpful, as they encourage opponents to attack you rather than a planeswalker; Court of Cunning is particularly good here because it can incidentally mill some cards into your opponents’ graveyards to provide more possible choices for Tasha’s spellbook.

If an opponent is able to bum rush Tasha or you with a bunch of creatures, that’s where Aetherize and Illusionist’s Gambit come in!

While I wouldn’t personally lean too heavily into milling opponents as a win condition, I think it’s worth adding cards in there to help give you more options for Tasha’s +1 ability, like Altar of the Brood, Maddening Cacophony, and Ruin Crab. Extract from Darkness does double duty as milling plus reanimating a hopefully large creature, all in one card. Consuming Aberration got some creepy new artwork, yet still does solid work here as a threat that can stock graveyards.

Cast Noncreatures You Don’t Own

There are quite a few spells and effects that let you cast instant, sorcery, or other noncreature spells that your opponents control, and we’ll definitely want a fair number of them here.  I’m personally a big fan of Chaos Wand, since you never know what you might get from an activation. Those effects tied to a creature like Diluvian Primordial and Dazzling Sphinx are particularly handy, as they provide a body to help defend Tasha from attacks.

Cast Creatures You Don’t Own

Tasha’s static ability triggers from any spell you cast that an opponent owns, so you can cast creature spells too.  Draugr Necromancer is quite powerful if you want to run a fair number of snow lands, since black already gives you a bunch of ways to directly kill creatures. I’ve been wanting to play Havengul Lich for a while, and I think it’s going to do some sweet work with Tasha. King Narfi’s Betrayal gives some more mill and hopefully nets you a few creatures you can cast.

Cast Spells You Don’t Own

There are a bunch of cards that just let you cast any sort of spell from your opponents, and what’s fun is that many of them are cards you rarely see at a Commander table, like Hedonist’s Trove and Nightveil Specter. I would probably load up on those cards, since they give you a lot of flexibility and options to cast creatures if you need them, or a clutch instant or sorcery if you need that.

Mnemonic Betrayal is a potent spell if you’ve got ample mana at your disposal, so if you’ve included big mana in the deck, such as Urborg, Tomb of Yawgmoth and Cabal Coffers, this is a fun inclusion. I think Dead Man’s Chest is really cool but have a tough time finding a good home for it, and I think Tasha might be perfect.

There are some cool new D&D-flavor cards that I’d personally be thrilled to run in the deck with Tasha, like Intellect Devourer, Elder Brain, and Brainstealer Dragon. Since a lot of Horrors synergize well with what Tasha wants us to do, I might even be tempted to use Tasha as a secret tribal Horror commander, especially in conjunction with new cards found in the Horror precon deck Mind Flayarrrs.

There are some other cards that play great with Tasha that I’d avoid putting in your deck unless you play exclusively in person.  Trying to play cards you exile from your opponent face down or searching an opponent’s library is very awkward over webcam on Discord or Spelltable, and I think there are plenty of other great options to run instead. That said, if you can play safely in person, these cards will do good work in Tasha!

There are some other goodies that synergize with Tasha that you might consider for the deck.  Agent of Treachery levels up if you control three or more permanents you don’t control. Sage of the Beyond was designed to boost the foretell mechanic, but plays great with casting your opponent’s spells. Tasha doesn’t really have a game-winning ultimate, but I do think it’s still worth running The Chain Veil to keep activating the +1 ability to draw a card and stock Tasha’s spellbook. And any deck with a planeswalker as a commander has got to run Luxior, Giada’s Gift to live the dream of killing someone with commander damage from a planeswalker!

What’s fun about a Tasha deck is how well is scales with the power level of the Commander pod you’re playing with. If your table is just goofing around with slower, more expensive spells, then that’s the sort of game you’re playing too. The same goes if your pod is playing higher-power, faster-mana spells. To further bolster that theme, I’d recommend playing Clone effects, letting you get creatures of the power level that the rest of the table is playing.

What do you think of Tasha, the Witch Queen?  Which other cards do you think play great with it?  Which decks will you be putting it in the 99?