Hello, folks, and welcome back to the third article of a joint collaboration between Star City Games’s own John Dale Beety and me from Hipsters of the Coast. We’ve returned once again this quarter to illuminate our collective experience both in and outside of Magic, and today we open up a proverbial treasure chest of creativity based on something we both find wonderfully interesting: jewelry. Today on Hipsters, John Dale has introduced some of the greatest jewelers working today, each of whom could lend their hand, eye, and expertise to the world of Magic art. If you haven’t read that article yet, hop on over and check it out now.

He’s tossed out some examples of cards and cycles that might work in these folks’ favor, and this article will complement and expound upon those suggestions. I’ve looked back on the history of jewelry-related Magic cards, and using JDB’s suggestions of jewelers, crafted Jewelry Boxes of sorts, collections of cards that would function as the Secret Lair vessels for the aforementioned artists. These would be the assignments given to artists to create, whether in physical form or card illustration, and pays attention both to their artistic strengths and the proposed cards included, from reprint necessity to current card pricing. I’ve curated five collections, as follows.

When I hear the word “jewelry,” my mind immediately goes to rings. For nearly fifteen years, I wore a blank, sterling silver signet ring on the middle finger of my left hand, taking it off every night and returning it to my hand every morning. That has now been replaced by a platinum wedding band, which will never leave my finger. Additionally, I’ve collected a small group of carved intaglio rings I like to wear for special occasions.

A ring and its ownership are symbolic; they become an extension of its wearer, a piece of the larger whole. These rings above all belong to someone: a man of myth, a legend, male and female, a newly wedded bride, or even an entire culture.

As such, I’d like to see Hancocks of London recreate these rings as their original owners might have, pouring 175 years of tradition and design into the process. Would the rings of Aladdin and Jandor draw inspiration from the Arabian Nights, where they first appeared? How would they invoke Jamuraa into Sisay’s Ring? What does the community of the Brighthearth flamekin of Lorwyn have to say in terms of jewelry-making? And a neo-Gothic wedding ring, using that brilliant piece by Olena Richards as inspiration? A snap-purchase at any price. I would wear and play any one of these creations if they were to come to life.

Some of my earliest Magic memories involve the five Primeval Dragons, from watching my best friend open a Crosis, the Purger to building some of our very first EDH decks around these legendary creatures. In Invasion, each Dragon was given a three-color instant spell called a Charm, and only two of those have ever received new artwork. I’d love to see these reborn as artifacts, physical objects in a hyperrealistic, larger-than-life style in order to bring these Dragons and their trinkets into contemporary Magic.

The jeweler for the job for this must be Michelle Ong of Carnet, who employs the boldness fit for these Elder Dragon legends. Her brooches are unique, and make one heck of a statement using no words at all. I can imagine her boiling down the essence of these ancients, and the final result would be one for the ages.

John Dale spoke to the idea of “sky’s the limit” creativity for his proposed artists, and there is perhaps no better vessel for such creativity than one of the most-played cards in the game, Sol Ring. While the card already has a dozen artworks (both released and announced), it’s a keystone to deck customization, which is near and dear to my heart, and essentially a blank canvas, moldable to both Magic: The Gathering planes and artistic talent.

For this triple Sol Ring Secret Lair, I’ve chosen those artists suggested by Beety that work in localized and Indigenous traditions. Azza Fahmy‘s work evokes the essence of the Arab, African, Ottoman, and similar traditions she weaves into her metallic metamorphosis.

Andrew MacGregor of Carved in Jade draws upon his Māori heritage, and perhaps the koru, an unfolding native bush fern and regular subject of his, could now take the shape of the famous Sol Ring, both as card and as physical pendant.

And last but certainly not least, Matthew Charley, a Dinė member of the Navajo Nation, works in traditional turquoise and sterling silver among other materials, creating everything from elaborate belts, bracers and cuffs to singular rings imbued with tribal symbology. What might the Sol Rings of the First Nations look like?

Sol Rings seem the perfect flagbearer to celebrate these cultures that may not have been fully realized in Magic, and these three suggestions are but the tip of the proverbial iceberg of possibilities. 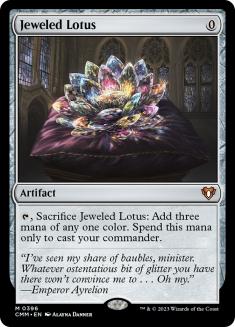 A single-card Secret Lair hasn’t happened yet, but when JDB mentioned Jacob the Jeweler, who has become a staple of hip-hop lyrics and a cornerstone of that jewelry wearing and collecting community, my mind went to one place. Jacob Arabo is multi-talented, from timepieces to fine jewelry, and now even NFTs, but the gemstones of his so-called “high jewelry” bewitch the mind and dazzle the senses. Imagine a Jeweled Lotus in a style similar to his Lilia Ring.

An actual Jeweled Lotus is entirely possible, and his design on a card would be unbelievable. A reimagining bringing Magic’s most identifiable symbol in focus with the height of contemporary jewelry, it would no doubt be a dynamite inclusion for folks seeking an alternative to the singly printed card.

Think of these four cards, present in an overwhelming majority of Commander decks, regardless of general, budget, or power level. Consider all their printings, what they mean to the worlds they represent and how you’ve seen them depicted. Now imagine them come to life, in physical form, to sit upon your desk, hang around your neck, or wear on your finger. This is not far-fetched.

Last year, Allison Cimino of RockLove released two collaborations with Magic: The Gathering, one featuring a range of famous artifacts, the other the game’s most recognizable card, the Black Lotus (and I promise you I’ve almost bought the signet ring a half-dozen times).

Cimino is simply brilliant, and the proof is already here, folks. It would simply be another commission for her to bring this ‘Commander’s Toolkit’ to life, just as she has done before. A collection of relics to wear, and her very designs as card illustrations for a Secret Lair. Put a bow on it, done and done.

I hope you’ve enjoyed this bit of postulating about what future jewelry-box Secret Lairs could hold, and I do think this is something we could definitely see in the future, following in the footsteps of the Dan Frazier Signets and just recently released Talisman series, as well as Magic’s collaborations with RockLove. The game’s art directors are adding new and exciting artists to the roster every day, and this would be another horizontal yet appropriate outlet to go looking for something completely fresh, with card, merchandising, and brand implications.

Before I leave, I ask who would you like to see create these cards, based on my suggestions above and John Dale’s roster posted over on Hipsters? Would an Amonkhet-based assemblage by Azza Fahmy fit the bill? What about a Kaladesh-inspired cadre by Jacob the Jeweler, with all his tiny gears and shiny gems? Or should each artist get the chance to choose their cards, a la the Artist Series, and interpret the cards in their own way? No art description beyond a title, pure blind creative chaos, into the mind of genius and onto the tabletop in front of you. Let me know over on Twitter what you think, and remember, the sky’s the limit.

John and I will have one more pair of articles later on this year coming in Quarter 4, and remember, you can find me regularly over on my home site of Hipsters of the Coast. As always, stay tuned, and thanks for reading.