For a while now, I’ve been focused pretty heavily on playing G/W Knightfall. After finally giving up on Summoning Trap, I turned to G/W Knightfall and it carried me to the finals of States last year. It’s a good deck, chock full of powerful cards… and yet when I’m checking out the Top 8s of the recent big Standard events, it seems to keep falling short. I thought I’d dig deeper into the performance of the archetype in the past two Opens to see if there is anything to learn.

Personally, I’ve been tinkering with the deck nonstop since States, nibbling around the edges, trying new things. Stoneforge Mystic has added a powerful dimension to the deck that I really like, and it’s obviously made a big splash in other White/x decks in the format. My most recent experiment was moving some copies of Mark of Asylum to the maindeck. Why would I put a card that appears to be a marginal anti-burn spell into the maindeck? Simpleâ€”the synergy between it and Master of the Wild Hunt is off-the-chart insane! If you’ve never experienced sicking indestructible Wolf tokens on your opponent’s creatures you should give it a try.

Here’s what I took to last FNM:

We had a pretty small group playing. I got Mr. Bye round 1 and crushed him, beat Vampires and this nifty Polymorph deck I called “Spreading Goblins” (more on this below) in the next two rounds, and drew into the Top 4 with my last round opponent. In the round of four I play against Eric playing a “stock,” older version of Jund. I mulligan on the play and stall out at 2 mana after he kills my mana dude for too long, he runs me over. Game 2 I play turn 1 Hierarch, turn 2 Cobra, Hierarch. Turn 3 I play a sacland, play Thornling, and have enough mana to give him Haste and still have a green up to protect from Terminate (and since it’s turn 3 and I’m on the play, he can’t possibly play two Terminate). Yep, that’s a turn 3 hasty 6/6 Thornling with the exalted triggers, and mana up to make him indestructible. That pretty much plays my hand out but it’s certainly enough to finish the game in short order. The last game is a heartbreakerâ€”my Hierarch lives, I get a turn 2 Mark of Asylum, then a Cobra (which gets Terminated). I then play Master of the Wild Hunt, which proceeds to dominate the board. Eric is quickly out of options, rips a Bituminous Blast off the top of his deck, and targets Master with it. Since it’s damage it’s not going to deal anything under the Asylum, but he still gets to Cascade. After turning over some lands, he hits… Maelstrom Pulse. He targets the Asylum with the Pulse, and then the Blast resolves, which now can kill the Master. Oof, talk about the worst possible Cascade for me (though I suppose he could have hit a Bloodbraid in between the Blast and the Pulse to technically be worse). I don’t rip any more gas and my Wolves and Hierarch can’t hold back Eric from doing what Jund doesâ€”rip sickness off the top of the deck and put the game away.

I mentioned the “Spreading Goblins” deck I beat in the Swiss. I sit down across from Joe West and I have no idea what he’s playing; last I saw him playing Standard he was rocking Eldrazi Green at States. I win the roll and end up having to double-mulligan into a hand with Hierarch, two lands, and two Exalted Angels. Figuring I might be able to pull something out (and especially if he’s playing monogreen) I keep, playing a turn 1 Hierarch. He Lightning Bolts my Hierarch; I play Stirring Wildwood, and he plays Spreading Seas on it. Spreading Seas!! I stall on two mana for a long, long time while he plays Goblin Assault and two Dragon Fodders, running me over with Goblins. I laughingly call his deck Spreading Goblins until I see what’s really going on Game 2 when Polymorphs a Goblin token into Iona, calling White. Lucky for me, I’ve got Maelstrom Pulse in hand to take out Iona, and go on to win the next two games and the match.

Joe goes 3-1 and makes the cut into the Top 4, and he ends up beating Eric Jund deck in the finals. I asked Joe to share the deck with me, because I haven’t seen anything quite like it before, though he was inspired by a version of the deck he ran across on Magic Online.

Bennie, credit should be given to MTGO player hellastupid11 (great name, right?) in some fashion, which is where the deck idea came from. I’m not sure if he is the original designer, but I took that build, made some minor tweaks, and added a Jace.

So I’m not the original deck designer, but then again, maybe it’s a new archetype?

Sideboard is a complete crap shoot that I just threw together. It needs work. To be honest, I think sideboarding a copy of Mindlock Orb might be worth a try for all the fetch decks running around.

Against Knight of Reliquary, Ranger of Eos, Stoneforge Mystic, and all the sac lands so many decks play, a second turn Spreading Seas, third turn Spreading seas, fourth turn Mindlock Orb should buy you all the time you need to win. Here is the version I played:

Personally, I think there should be some copies of Progenitus in the sideboard, since that was the one card I was most scared to face off against my deck. I did find Joe’s deck very interesting and wanted to share it with my readers. Joe won the tournament, and when he opened his Worldwake prize packs, what was waiting for him but a Jace, the Mind Sculptor… which cut me deep to my soul, since my two prize packs yielded an Archon of Redemption and Selective Memory.

Anyway, moving on to Knightfall and digging into Jared Sylva awesome “Too Much Information” spreadsheets!

At the Richmond Open, here’s how the Knightfall decks did: 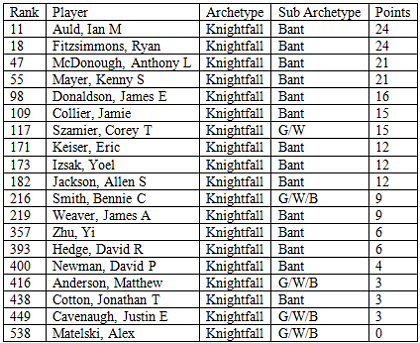 Wow! Only 5 Richmond players went with a non-Bant version of Knightfall? Corey Szamier got two more victories than I did, so let’s check out his decklist:

Corey’s story is pretty much my ownâ€”the deck does pretty well against Control and White Weenie, does fairly well against other non-Jund mid-range decks, but is hit or miss against Jund. 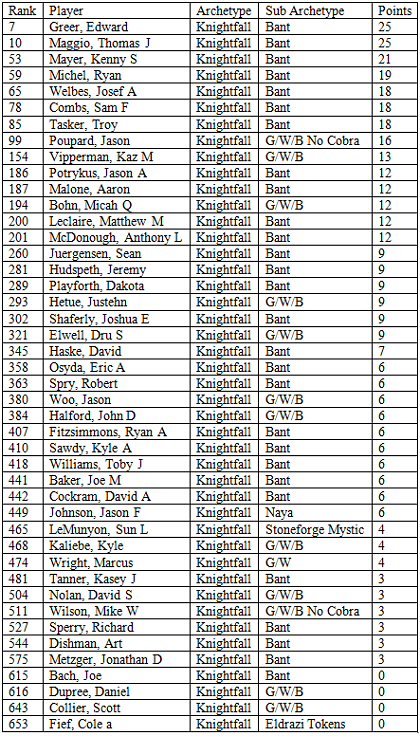 Wow! That’s a lot of Knightfall! Zvi’s Mythic was one of the breakout decks from Pro Tour San Diego, and while the decklist was available for Richmond, there probably hadn’t been a lot of time to digest the decklist. For Indianapolis though, you had plenty of information on how to play the deck, and certainly plenty of people gave it a whirl.

Jason was fortunate enough to only play Jund twice, sweeping one match and getting swept the other match. His loss in round 8 was against Tyler Blanchard, who made Top 8 with Naya. His deck included the devastating Cunning Sparkmage/Basilisk Boss Naya sideboard technology (technology by the way that’s shut down by Mark of Asylum). I find it interesting that he’s only running 1 Baneslayer Angel and wonder if that’s because of availability or choice.

Let’s look at Kaz Vipperman’s deck, the next one down the list:

Kaz was lucky enough to avoid Jund until round 7, where it knocked him out of the running with a sweep.

The Bant Knightfall/Mythic deck was much more popular in Indianapolis as well, but only wracked up an average 10.3 points. The non-Bant Knightfall decks again did about half as well, and averaged 5.9 points.

The evidence seems pretty strong to me: the Bant/Mythic Knightfall decks are just flat out better than the G/W or G/W/B versions. The biggest strength I’ve found in playing Knightfall are its incredible creatures, and how much you tax an opponent’s removal.

Okay. Turn 2 Lotus Cobra? You can’t let a turn 2 Cobra live and risk a ridiculous turn 3 play, can you?

Okay. Turn 3 Knight of the Reliquary? Everyone knows you’ve got to kill that guy now before he’s no longer summoning sick!

Okay. Turn 4 Emeria Angel or Master of the Wild Hunt? Either of these cards can quickly get out of hand with token creatures, you’ve got to get rid of that!

Okay… then we’ve got Baneslayer Angel, Thornling… at every stage of the game, you’re playing a creature that demands attention. Eventually one or more of them stick and start causing real problems for your opponent.

You’re playing attention-demanding threats turn after turn, add in some removal spells, maybe a couple Planeswalkers, and boomâ€”you’ve got Knightfall. The Mythic deck takes Knightfall’s strength and pushes it to the extreme by just stuffing it to the gills with threatening creatures and a couple copies of Finest Hour (a very scary enchantment). Mythic’s cards do a nice job too of combining for at least one devastating attack, unleashing incredible damage often out of nowhere and putting the game situation in your favor.

Until Rise of the Eldrazi comes out, I’m going to tinker around with a more Mythic-influenced version of my Knightfall deck, upping the threat count with some of those crazy Bant Exalted cards and see how it goes. I’ll hate losing Maelstrom Pulse, but one of the reasons I went in that direction was fear of Jace, the Mindculptor. In current Standard, Jace doesn’t seem quite as scary as I’d initially thought, so perhaps I’ll be fine. Here is my initial, anti-Jund build:

Maindeck Grizzled Leotau may look completely insane but hear me out. When I played Finest Hour Bant last year, one of the things I remember having issues with was defense. While it was awesome dealing double-digit damage with Birds of Paradise on the attack, Birds suck on defense. So do Lotus Cobra and Rafiq. Even though Exalted decks want to be on the attack, you can’t always be the beatdown when you’ve got Jund around. Turn 2 Grizzled Leotau can buy you the time you need to start dropping your higher-cost big guns, and thanks to the insane Exalted cards in here, Grizzled Leotau can go on the attack and dish out a lot of damage if the coast is clear.

Okay, that’s it for this week. I’d like to thank Jared Sylva for making the decklists available to me for this article, and thanks for your awesome efforts in putting together the Too Much Information spreadsheets! It’ll be interesting to see if I can keep focused on building a better Knightfall deck amidst the trickle of Rise of the Eldrazi spoilers; man, there are some tantalizing Eldrazi behemoths coming in that set! Something tells me “Eldrazi Green” is going to look a whole lot different after the prerelease.