I’ll start with Standard. I’m going to list the top 16 decks from the most recent $10ks — Dallas and Los Angeles — and the Top 8 decklists from St.Louis. (I can only find the Top 8 lists from that event.) I’ll do a bit of combining — for example, Vampires and Vampires with Red are different decks, but I’m combining them under “Vampires.” The same is true of Jund. There are a ton of Jund decks, and they all vary slightly, but I am combining almost all under Jund. The one exception is the Sedraxis Specter / Ancient Ziggurat decks, which are different enough form Jund to be worth noting.

Here are the archetypes that appeared, followed by the number making Top 16. Decks in BOLD won an event.

This is a moderately varied format, but there is still an elephant — or at least a Putrid Leech – in the room. Jund is still one-third of the total decks. The only positive sign is that the deck had the majority of its appearances at the first event, and the numbers are dropping a bit. Jund was just one quarter of the Top 16 in Dallas, down significantly from the 50% ranking a week earlier in LA.

Here’s a the breakdown, graphically: 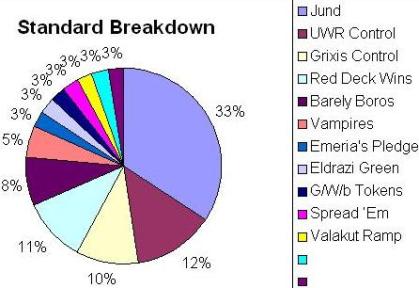 On Sundays, at the Open Weekends, SCG runs Legacy events. These feature a more diverse metagame. In this case, I have the Top 16 from Dallas, LA and St. Louis to work with — and nothing seems all that dominant.

This is a much more varied format — none of the decks account for more than 17% of the metagame. Best of all, an Enchantress deck won. I’ve been playing and writing about Enchantress since 1999, so that does it for me. What a great format! 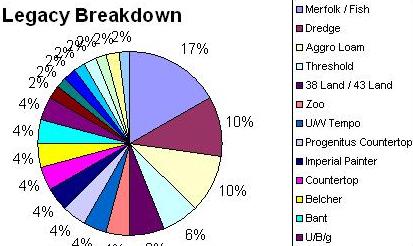 Let’s crunch the numbers a different way. I looked at the Top 8 decks from both the Standard and Legacy events in Dallas. Here’s some breakdowns.

I’m not sure how much you can draw from all this. The SCG Legacy events show a format in development. Each week, the metagame shifts, in reaction to the week before. Fish decks were almost invisible in the first couple events, then three made Top 8 last week. Having three Fish decks in the Top 8 does tend to skew the results a bit, but even in other weeks, Wasteland, AEther Vial, and Force of Will are always going to be major players in Legacy.

In Standard, one big surprise was the complete lack of Baneslayer Angel. The Top 8 had zero copies main, and just 4 in the sideboard. Control doesn’t need it, I guess — not even All American (UWR) Control.

Finally, how good is Lightning Bolt? This little three-mana burn spell was played in seven of the Top 8 Standard decks, and was the 15th most commonly played card in Legacy. All of the cards that beat it out — including Tarmogoyf in some cases — were played in Fish decks. With one less Fish deck in the Top 8, Lightning Bolt may well have cracked the Top 4 played cards.

Overall, both formats seem pretty open. Sure, Jund is powerful, but it can be beaten. I know I am enjoying playing both formats.

For those of you without premium, a few extracts to show you what you are missing. Check out their thoughts on one single combo deck:

Sam Black: “The following deck has done very well in Magic Online events. It’s probably worth taking seriously. … but this deck has a lot of really good things going on.”

Cedric Phillips: “Look, you guys can work on [it] all you want, but that deck sucks, and you are fooling yourself if you believe otherwise. … It has no shot in hell of winning now that everyone knows about it.”

Paula Vitor Damo da Rosa: “To me, Extended right now is defined by UW Tezzeret, [this deck], Fast Zoo, and big Zoo (which can be either Saito’s or Kibler’s – I personally like Saito’s build more).”

Paulo also said: “I think the biggest disappointment was [this deck]. I think it was played a lot and didn’t really deliver, but that doesn’t mean it’s necessarily bad.”

Richard Feldman: “Given the success of Zoo at Austin, I was particularly interested when Manuel Bucher wrote about [this deck] that smashed it. However, looking over the top-performing decklists at the tournament, it seemed like [this deck] would be too slow for the format’s several successful combo decks, and Manu B’s matchup discussion at the end of his article confirmed this fear.”

Want to know what deck the pros are talking about?

Here’s a hint, though. Cedric said: “I have a clever name for it if you remove the F.”

This is a bit of a cheap shot, since I am taking parts of different articles, written at very different times. The format is evolving — and it is also fairly diverse. I certainly don’t have it figured out. If I did, I’d write about that. Maybe next time — and maybe not.

In Extended, whatever deck I playtest heavily seems to win, for a while. Then I try something else, and it does the same. Over time, all the decks seem to win sometimes, but not all the time.

I think that’s what they call a diverse format.

“one million words” on MTGO