Going over a deck consists of enacting a plan that is fundamentally more powerful than that deck’s gameplan. If both decks realize their plans, the over-the-top deck will win simply by going bigger. For instance, maybe one deck plans to cast a planeswalker each turn until the cascading advantage results in victory. The other intends to curve out with mopey creatures and ‘walkers and then cast Command the Dreadhorde to generate a massive battlefield presence. Even if the first deck successfully casts ‘walkers up the curve, the Command the Dreadhorde deck will win unless it stumbles on lands, fails to find Command or otherwise fails to be functional. This forces the Superfriends deck to attempt to go under Command, even though it is not built to do so.

Mono-Red decks in general are highly resistant to attempts to go under them due to their speed. A deck has to be very low to the ground to reasonably race a deck filled with burn spells. In the current format, the only deck that attempts this is Mono-White Aggro. Between a whopping twenty one-drops and a handful of convoke spells, Mono-White can consistently get ahead of Mono-Red in the early-game. But Mono-Red can effortlessly become a credible control deck in that matchup. Its burn spells all trade with Moon-White’s creatures and Experimental Frenzy trumps anything the leaner deck can produce. That’s not to mention the fact that Goblin Chainwhirler’s trigger kills more than half of Mono-White’s one-drops and its body roadblocks even pumped History of Benalia tokens.

A similar strategy has made Mono-Red favored against most fringe aggro decks, most notably Mono-Blue, to the point that these decks have been driven completely out of the format. Because Mono-Red is so resistant to this approach, the only true aggro deck that has been successful lately is Mono-Red itself.

This means that the only realistic way to attack Mono-Red is to go over it. To go over Mono-Red, a deck must:

This is no small feat, but I think decks like Ben Friedman’s winning list from Grand Prix Kansas City manage that balancing act.

With Oath of Kaya and Basilica Bell-Haunt to stay afloat and an army of Teferis to delay Experimental Frenzy while generating advantage, this list manages to be a solid favorite against the best deck in Standard. Decks along these lines have existed since early in War of the Spark Standard but they have not taken over despite the overwhelming popularity of Mono-Red.

The reason for this is that the rest of the format has re-trumped these decks and gone over them. As I alluded to above, Command the Dreadhorde dismantles planeswalker-heavy midrange decks. Even the small choices in that deck make clear the intent of its creators. Vraska, Golgari Queen was included specifically for her ability to remove the three-mana ‘walkers that Esper decks like Friedman’s rely upon. Likewise, Teferi, Time Raveler makes it impossible for sideboard cards like Dovin’s Veto to bail them out. Command the Dreadhorde is built, from top to bottom, to lock out every angle of attack Esper has available.

If the format had stopped there, Standard might have reached equilibrium. The red decks are ground out by Esper Midrange, which is overpowered by Command the Dreadhorde. The latter deck, in turn, is filled with clunky cards like Tamiyo, Collector of Tales and built around a six-mana sorcery that’s blank if your life total is low. As a result, Mono-Red is favored against Command, keeping the balance.

But the wheel keeps turning and Standard keeps evolving. Players seeking to go over the top of Command the Dreadhorde identified a simple truth: it doesn’t matter how big they make their battlefield if you untap with enough mana and Mass Manipulation. The resulting ramp strategies frequently win games against Command where the namesake card is cast from twenty or more mana. They trump Command’s gameplan just as soundly as Command trumps Esper’s. But Mass Manipulation is too expensive to be relevant against Mono-Red, and mana creatures like Paradise Druid and Llanowar Elves are extremely vulnerable to Goblin Chainwhirler. As a result, these strategies remain weak to good old Mono-Red.

This is a classic example of an arms race: all these reactive decks are constantly trying to go over the top of each other. The result, like most real-world arms races, is that everyone involved loses. Every week, players seeking to go big find a new way to trump last week’s deck. But while they succeed at that goal, they still lose to Mono-Red. It doesn’t matter as much if your Level 3 deck beats Level 2 when it loses to Level 1 in the process. At the same time, Mass Manipulation and Command the Dreadhorde keep Esper from ever winning too much, checking the popularity of one of Mono-Red’s only bad matchups.

If you’re uncertain of what to play at the Season One Invitational this week, my first instinct would be to just play Mono-Red. You won’t be without bad matchups, but you will be favored against most of the field and even your bad matchups are quite winnable. Mono-Red was, by far, the most popular deck in the Magic Pro League last week and has been racking up trophies since the format began. Metagaming is highly overrated, and in this environment, Mono-Red’s bad matchups have plenty of bad matchups of their own.

I have few strong opinions of the specifics of your Mono-Red list, save this:

Experimental Frenzy is the best card in your deck — don’t even think about playing three.

The main risk of playing Mono-Red is that if it is too popular, the winners’ metagame will consist of entirely red decks and their bad matchups, with Mass Manipulation and Command the Dreadhorde pilots losing early to the fiery menace. If you think that outcome is probable and want to avoid Mono-Red, I recommend opting out of the reactive-deck arms race and playing something proactive.

Gruul Midrange has a favorable Mono-Red matchup and stands a fighting chance against the bigger green decks by virtue of being able to just kill them. Gruul’s wide variety of strong haste threats lines up well against the many planeswalkers of Standard. Additionally, Nullhide Ferox stands out as well-positioned at the moment. It’s bigger than the entire format, immune to the popular removal, and awkward to answer via planeswalker. 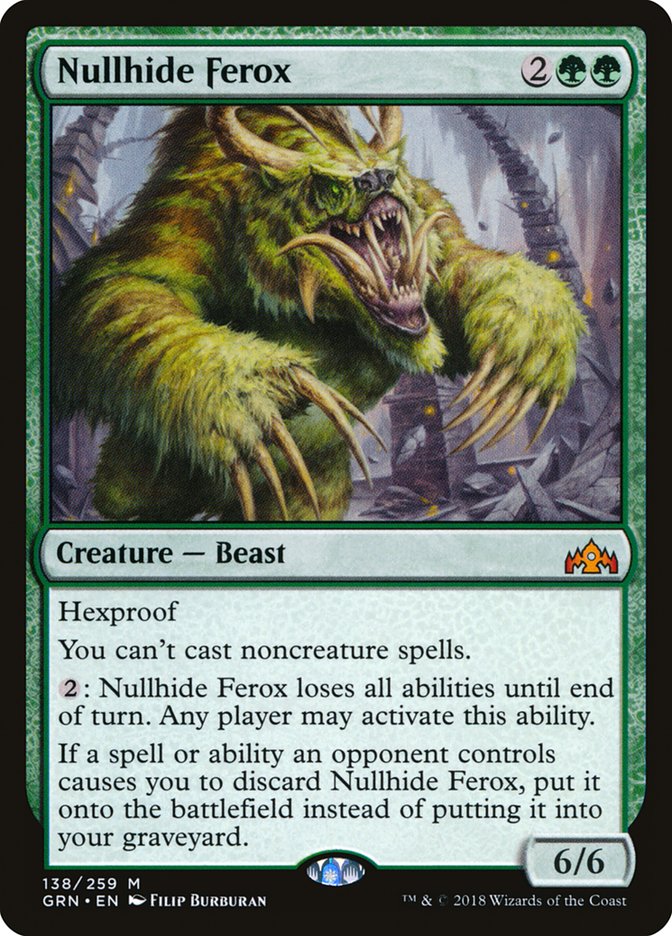 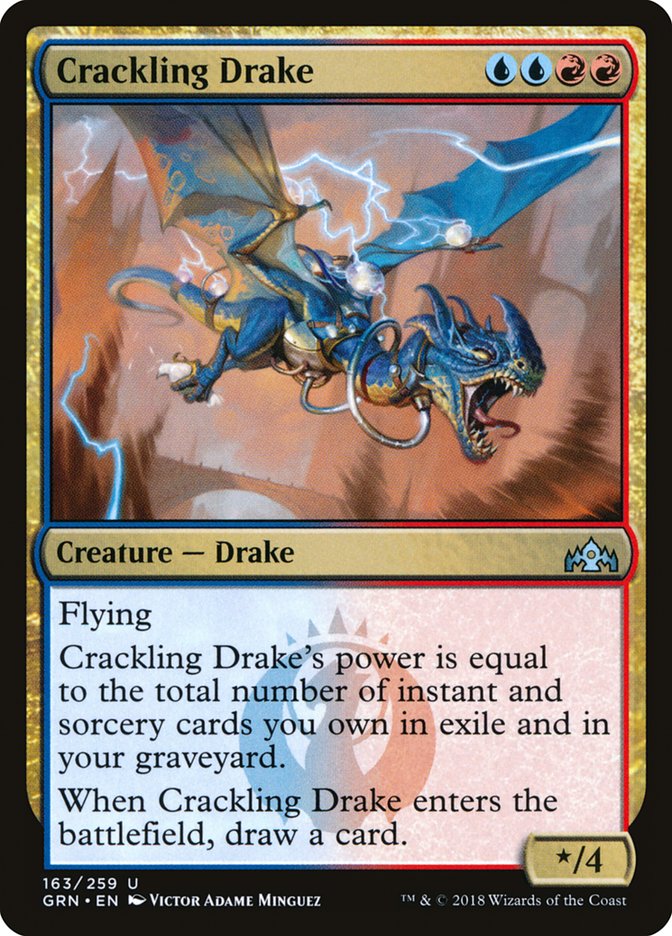 Izzet Phoenix is another consideration, as nobody is prepared for the deck at the moment. Once, every deck in the format could efficiently answer your Crackling Drakes. But these days, Vivien Reid has been completely supplanted by Nissa, Who Shakes the World and the most popular black removal spell is Tyrant’s Scorn. The counterspells Izzet Phoenix has access to give cards like Mass Manipulation and Command the Dreadhorde fits, while the deck’s namesake 3/2 clears out any problematic Teferi, Time Ravelers. Spell Pierce is also effective against Experimental Frenzy and Chandra, Fire Artisan out of Mono-Red, cementing its place in the maindeck. Izzet Phoenix may not have an amazing Mono-Red matchup overall, but I still think there’s a good chance it rises from the ashes this weekend.

Honestly, I think there is merit to even generally Tier 2 options like Boros Feather and Mono-White Aggro this weekend. As long as you play a deck that can end the game before your opponent casts Mass Manipulation for four, you’ll be in a fine spot to hoist the trophy. In the end, it doesn’t matter if your opponent is up one hundred cards, controls 47 permanents or has access to thirteen mana.

All that matters is that their life total is zero.