This past week I ventured north for Grand Prix Montreal, where I finished with a record of 12-3 in thirteenth place. My tiebreakers were fantastic after day 1, and a strong Draft performance meant that I earned myself three Pro Points. But in all truth, I was never close to making Top 8. It happened again as it has so many times before—I lose the first or second round of a Grand Prix day 2 and then grind out my few hundred dollars to finish up somewhere between ninth and thirty-second place with three losses.

"So dat’s it den? Just like a young man coming in for a qvicky. I feel so unsatisfied." –Teddy KGB, Rounders

However, if man is truly known by the company he keeps, then I’m in great shape. Alex Majlaton and Ben Friedman picked me up in a beat-up Subaru station wagon somewhere outside of Philadelphia, and we were off to the Great White North. It wasn’t until we hit the highways in the northern part of New York that the conversation turned Magical and Alex started in with his usual "I hate this format, I can’t win at anything, someone tell me what to do," so I obliged him.

You can read Alex’s thoughts on his Grand Prix experience here, but his memory of my rant while driving provides the perfect transition to my article topic this week.

"Basically, he said that for Sealed the three deepest colors are white, green, and black and that the deckbuilding process should start by looking at these three colors as a base. Blue and red are often too shallow to do anything but be support colors . . .

In addition to various color strengths, Harry said that archetypes are also very important. For example, W/R is a very strong and well-known archetype capable of having both powerful and synergistic decks. On the other hand, decks like G/W might be lacking in one of those departments. This format is mostly tempo oriented, so you want a deck that is capable of either having a fast start or dealing with a fast start. Of course, both of those is obviously preferable, but the main idea is to have a solid well-defined game plan. Harry said that his favorite archetypes are U/G and W/R. He also said that he really prefers not to splash a third color and generally sticks to two-color decks."

So today I’m going to go over the Top 5 Theros/Born of the Gods Limited color combinations.

The combination of two-drop mana acceleration and Nessian Asp is still a format-defining series of plays, and green got some new toys to play with in the form of Swordwise Centaur and Pheres-Band Tromper. But it’s really the blue bounce and tempo spells like Voyage’s End, Retraction Helix, Griptide, and Sudden Storm that put this archetype over the top and into my number one spot. There will be many arguments made for my number two choice to get the nod over the G/U, but I’ve made my decision mostly as a result of the power of blue as a support color and how it impacts games of Limited.

With so many quality bounce spells available in the environment, it’s important to evaluate decks from the perspective of how their creatures look at a basic level. The beefier base stats of green creatures mean that spells like Voyage’s End will not be able to keep large amounts of damage in check like they do when handling creatures such as Wingsteed Rider and Akroan Skyguard. It takes a lot of resources to rebuild those creatures into formidable monsters, while Nessian Asp is just a 4/5 with reach every single time.

The white aggressive cards are impressive when paired with blue support, and with great heroic cards like Wingsteed Rider, Akroan Skyguard, and Wavecrash Triton, the synergies of the W/U Heroic deck make it a serious contender for the best deck in the format when all the pieces come together. Wavecrash Triton in particular is a card that continues to impress, and I have no problem with first picking it at this point. Ephara’s Enlightenment is completely bonkers for anyone who might be unfamiliar, and it just so happens to also trigger heroic while comboing with the most abundant permanent in Limited: creatures.

While many of the creatures in blue and white fail to match up well with other creatures on their own, the fact that so many cost between one and three mana means that shaving a land is frequently encouraged. It’s easy to find yourself the benefactor of an increased number of spells, but I would caution going below sixteen lands in most W/U decks due to the importance of four-mana spells like Griptide and Sudden Storm.

Hyperaggression is the name of the game when you pair white with red. Heroic is still a central theme of the deck, but it can take a back seat to a good old-fashioned beatdown complete with removal and tricks. There’s something really special about taking your opponent’s only blocker with a Portent of Betrayal or putting four power into play on turn 2 that makes certain folks get up in the morning. I can empathize with these people, as I too love to administer a savage beating regularly while still having time for a snack in between rounds.

Unfortunately, if you’re looking for fragile cards in a standalone fight, you need look no further than these various 2/1s for one mana and 1/1s for two mana. If what you’re looking for is answers to the question of what happens when your opponent plays a 3/3, I’m afraid I can’t help there either. It’s possible some of the tricks will help, but only for a little while. And if your opponent’s deck is also good, it’s difficult for W/R to get going.

Another problem with the white cards is their dependence on heroic in order to be effective. When the core of your strategy is white heroic cards, blue bounce becomes better against you, and the only removal available is red damage based and white conditional four-drops.

The issue with base green decks and the reason why this powerful archetype has fallen to a very close fourth place is that they take a little while to get going. It isn’t until turn 5 or 6 that a base green deck is really in the driver’s seat and ready to turn the corner into winning the game. In the meantime, the opponent could very easily establish Wingsteed Rider plus Hopeful Eidolon, which will need to be dealt with immediately. Again, due to the limited effectiveness of damage-based removal spells like Lightning Strike, the G/R deck can be left a day late and a dollar short, even with Nessian Asp.

However, that doesn’t stop Fall of the Hammer from being at its best, as well as Archetype of Aggression.

I also present this mulligan to five cards for your enjoyment. Is that a turn 3 5/5? 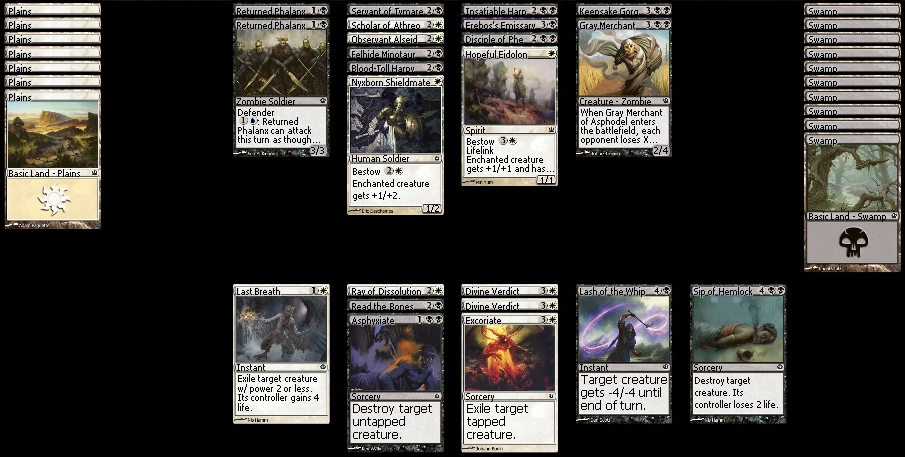 While there are some subtle differences that cause me to differentiate between the first four decks, I feel like the control decks (all of which are based in black) are miles behind the tempo necessary to compete with white- and green-based decks. As a matter of fact, it’s really only for diversity that I include B/W (which I believe is the best version of a control deck in this environment) over something more vanilla like G/W.

The reason behind highlighting B/W versus something like B/U is because of cards like Divine Verdict and Excoriate. When a deck doesn’t have the ability to put a great deal of power on the battlefield, then the effectiveness of blue bounce spells goes down quite a bit. The white removal is certainly conditional, but once a condition is met, the offending creature is gone for good, not just put somewhere for safekeeping. In addition, the power of cards like Scholar of Athreos and Sentry of the Underworld are on par with the benefits you receive from having access to B/U cards like Shipwreck Singer and Siren of the Silent Song.

While I do love me a deck full of creatures, the G/W deck has quite a few problems when the opponent gets around to playing creatures of their own. If the creature is threatening enough, then the G/W player is put in the very familiar situation of "Time to Feed or bust," as evidenced by my round 6 feature match against David Ochoa.

Did you notice how whenever he played a creature of any kind, the game came grinding to a halt or I just died? There was one spot in game 3 right after I cast Hold at Bay where I was about 15% to steal the game even though I was flooding super hard, but alas I couldn’t get lucky. The actual lesson about G/W is that the one-turn window at 15% was just about the best spot I could possibly play myself toward because I was so helpless to combat anything David had to contribute to the board.

The best part about Theros/Born of the Gods Limited is that all ten color combinations are playable to some degree. Blue and black can still produce a good control deck, while red can lend an aggressive hand to either black or blue with some degree of success. I’m not sure what the G/B deck has going for it outside of Sealed Deck, but I know that any quality spells paired with a green base can always produce a winner.

Happy PTQing, and see you all in Cincinnati!