A lot of powerful decks existed but were kept in check by Esper just demolishing slower, big-threat strategies. Think about the White Devotion deck Gerry talked about with Sphinx’s Revelations.

Three-color mana was sketchy without Sylvan Caryatid, but could support multi-color two drops if necessary.

This was the deck I opted to play at Pro Tour Theros. We were really high on Brave the Elements as a way to break through creatures stalls that inevitably happened in this format, and Mogis’s Marauders was basically the same card attached to a body. Our first draft had Chandra’s Phoenix as the second three-drop over Lifebane Zombie, but that made the mana much worse and didn’t line up perfectly with Mogis’s Marauder. Lifebane Zombie is also a much more powerful card and easily can win games on its own. 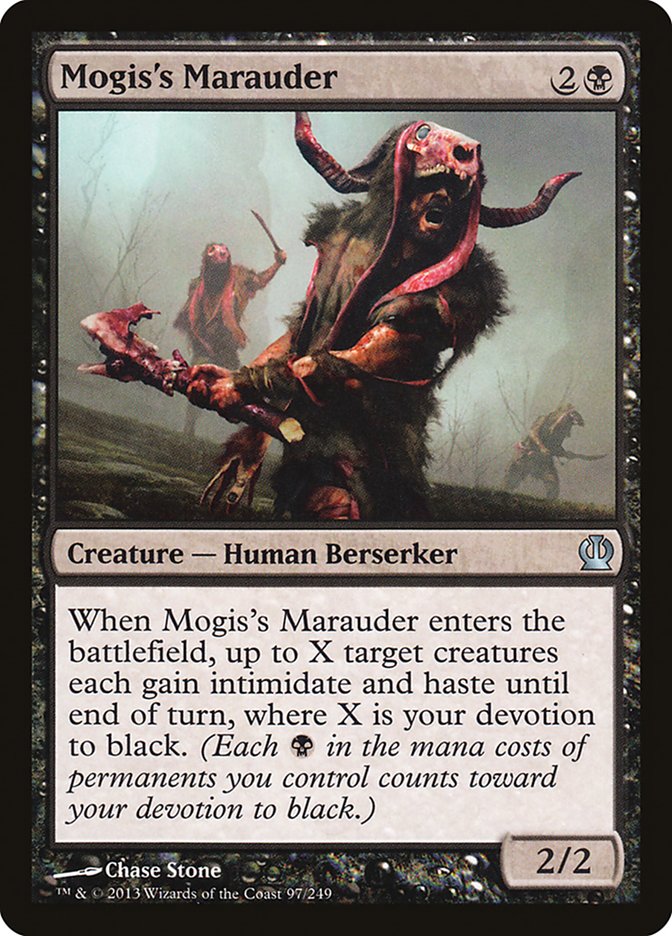 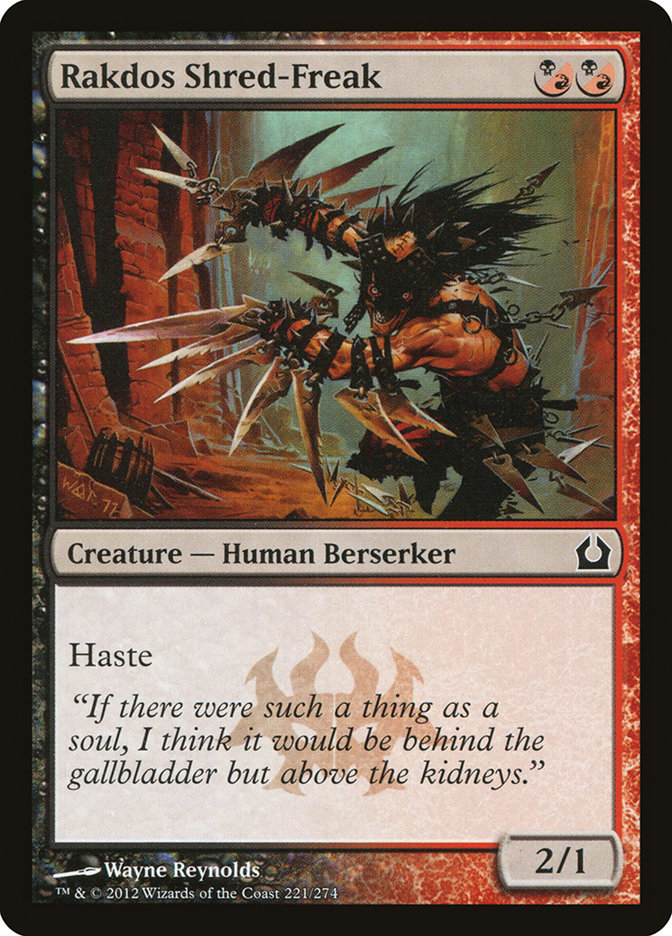 Rakdos Shred-Freak was a point of contention. It’s definitely filler, but it does what the deck wants to do. The previous two-drop we tried was Thrill-Kill Assassin, but Shred-Freak was a card that played better with the linear kill-them strategy of the rest of the deck. Moving forward into a format that punished red creatures (Tidebinder Mage) and x/1s (Frostburn Weird), I would switch to the 2/3 with Deathtouch.

This deck smashes Sphinx’s Revelation control decks and bigger green midrange decks. I played those matchups a combined one time. That match took under fifteen minutes.

The switch to the haste guys from the mono-red guys more focused on board presence really changes how the deck plays against Supreme Verdict. If your opponent has running Verdicts, they usually take an extra two to four damage in the middle. Add this to the fact that your nut draw has them at 15 life before they play a second land and you can see why it’s very difficult for control to make plays that don’t result in them dying.

Green-Red often just comes out too slow to not die. Even when they don’t, Mogis’s Marauders is a game-ender. I played against Junk at the Pro Tour, which is slightly worse than Red-Green but still very easy. Blood Baron of Vizkopa is a problem, but you have Lifebane Zombies and Thoughtseize to answer it and can just kill them before it hits.

I played base green-white decks three times to a 2-1 record. I kept some weak hands the first time around and lost, but I also was running pretty hot across all three matches. The matchup isn’t great, but it’s winnable. Oddly enough Naya is much better than green-white, as despite gaining access to Boros Reckoner and Domri Rade they have fewer one-drops and more tapped lands. Lifebane Zombie is a huge threat, and any game where you draw multiple Mogis’s Marauders is very hard to lose. On the flip side, games where they lead on Soldier of the Pantheon into Voice of Resurgence are a problem and you rarely beat an Unflinching Courage without removal. Gift of Orzhova is huge out of the board here as it pushes your creature through and prevents them from racing. Just be sure not to suit up a guy into Selesnya Charm range. 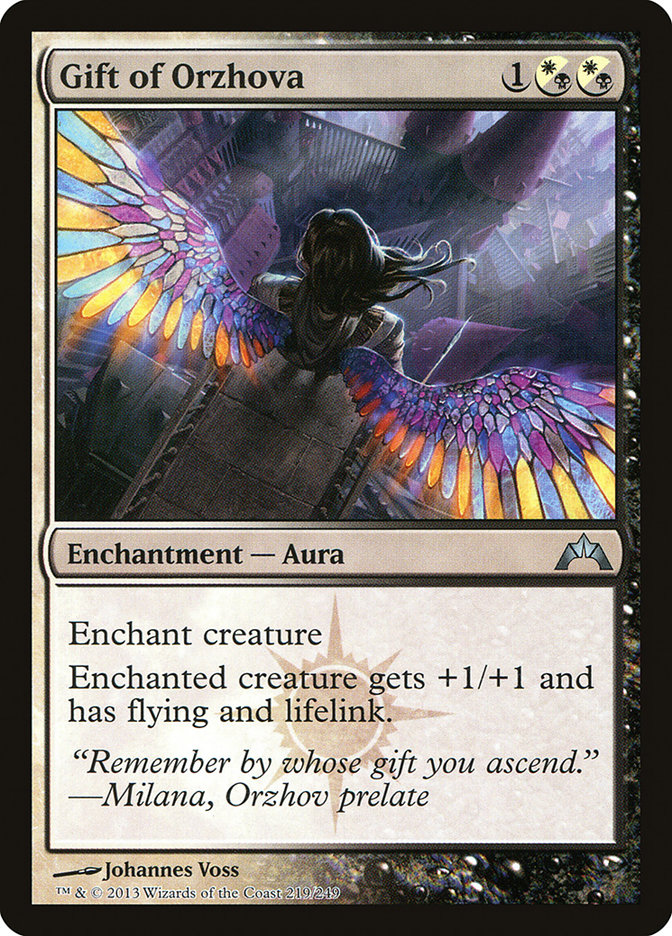 The matchup against Mono Blue Devotion is likely better than my 1-2 result suggests, but it’s not a great one to battle against. The list I beat was a Blue-White control hybrid list that I easily ran over, while I lost to Tom Martell and Kai Budde. They have a lot of good cards against you such as Frostburn Weird, Tidebinder Mage, and Judge’s Familiar (trades for Spike Jester), but their curve sometimes just doesn’t come together. The biggest threat they have is Jace, Architect of Thought as it makes applying pressure nearly impossible, but fortunately the current lists play very few of that card maindeck. Post-board you become a bit threat-light, but they are fairly removal-light. I think you want Gift of Orzhova against them, but it’s possible that between Tidebinder Mage and bounce spells that card just isn’t good.

I was defeated by a Red Devotion deck in a later round. Their access to eight great two-drop blockers and cheap removal is an issue. Similar to Mono Blue Devotion, the matchup seems winnable but a few things have to line up in your favor for it to go that way.

The only deck I felt I had absolutely no chance against was Andrew Cuneo’s black-white Humans deck. In other matchups, Intimidate was nearly synonymous with unblockable. Andrew was playing a bunch of black creatures, including Xanthrid Necromancer to make blocking profitable. He had normal problem blockers like Precinct Captain and Soldier of the Pantheon to fill out his early curve, making it difficult for me to steal games with nut draws, and capped off with the unbeatable Blood Baron of Vizkopa. I dealt approximately five damage to him in our games.

Given what we now know, this deck was clearly not a great choice for the Pro Tour. Given what we expected, I think this was a fine high-risk, high-reward deck choice that just didn’t pan out.

Yes, that is a 61 card list. The last cut was something that kept going around as a near-impossible decision to make. It’s likely that a Ghor-Clan Rampager or a Xenagos is the worst card, but I’m not sure.

This deck is the reason we discarded Mono Blue Devotion. We were three cards off of Sam Black build on our first shot, but that’s not surprising as there aren’t really a lot of actual options for the deck. It turns out that despite access to a bunch of cards that Red-Green Monsters should have issues with, the blue deck wasn’t reliably able to win here. Part of this was the fact our Monsters list had Reverent Hunter and was able to steal games with aggressive curves of Kalonian Tusker into a 4/4. If the deck with maindeck hate for red and green cards wasn’t beating the red-and-green midrange deck, what was it trying to accomplish? Had we tested against more stock Ember Swallower lists, we likely would have come to very different conclusions.

I make no promises this list is close to perfect. I just want to point out a few key factors as to why I liked where it was at late in our testing.

This list opted to play more powerful removal instead of hedging against Mono-Red Aggro. Considering we knew mono-red would perform very poorly at this event, that was a sacrifice I was very willing to make to be better-positioned against Red-Green Monsters and other midrange decks.

This list is not playing 4 Azorius Charm. The card does a lot of things, but you are leaning mostly on the Time Ebb mode if the card is going to be good. That’s fine against mono-red, but the other decks in this format are packing Voice of Resurgence or Stormbreath Dragons that make the card look much worse. You still want a decent number of this card, as it leads to smoother draws, but you aren’t obligated to play a full set.

I’m not playing the full eight scry lands. That could easily be wrong, but I wanted to demonstrate that casting your spells is more important than value. Our Naya lists originally had this same issue and played zero Selesnya Guildgates.

On this note, I really liked Guillaume Wafo-Tapa choice to max out on Hero’s Downfalls over Detention Spheres. It let him bias his requirements towards black mana, which in turn let him run the full eight scry lands. It ended up looking a little silly when the top tables were all Thassas that could be Detention Sphered but not Hero’s Downfalled, but if he was matched up against a bunch of Stormbreath Dragons instead he would look really smart.

I have talked a lot about upping my Limited game. I did average at this Pro Tour, but I feel like I had a better understanding of this Limited format than I have for a while. There’s a lot of things regarding removal timing, attacking, and combat tricks that I just feel like I make the right decisions about by default. I also feel like I have a very good feel for how the signals in this format work, and made very accurate guesses as to my opponents’ positions.

My first draft deck was green-white. During the draft, it looked like there was a two-person fight over green on the other side of the table, so I drafted to be well-positioned in those matchups. I lost round two to an aggressive black-red deck, but my draft planning paid off when I won a green- white mirror match in the third round.

My second draft deck was black splash white, which I feel is the only good white-black deck. I was missing early interaction and died to quicker Heroic or Ordeal-based starts, but I demolished my one green matchup. I should have realized that I was not actually committed to red earlier and picked up an extra Last Breath, but besides that I felt like I knew where I should be in the draft fairly early.

Both drafts had a common thread: not enough early action. I feel like this is a common issue I have in Pro Tour drafts, and I will adjust in the future.

As an aside: I mentioned white-black is conditionally good based on being mostly black, but that’s a rare case in this format. All the other color combinations are good with one exception: red-blue. It’s a tempo deck without good early drops beyond Vaporkin, which is really only good in one direction. If you end up behind the card is very bad, and it’s easy to end up behind. You are behind on size at many points, and your cards are just stretched too far to reliably win.

The big takeaway I have from this Pro Tour has not been a “why we failed” analysis of how we missed the best deck. We had the deck, we just had different expectations of what would show up. All the changes I plan on making are operations-based. It’s just a matter of creating processes for each one.