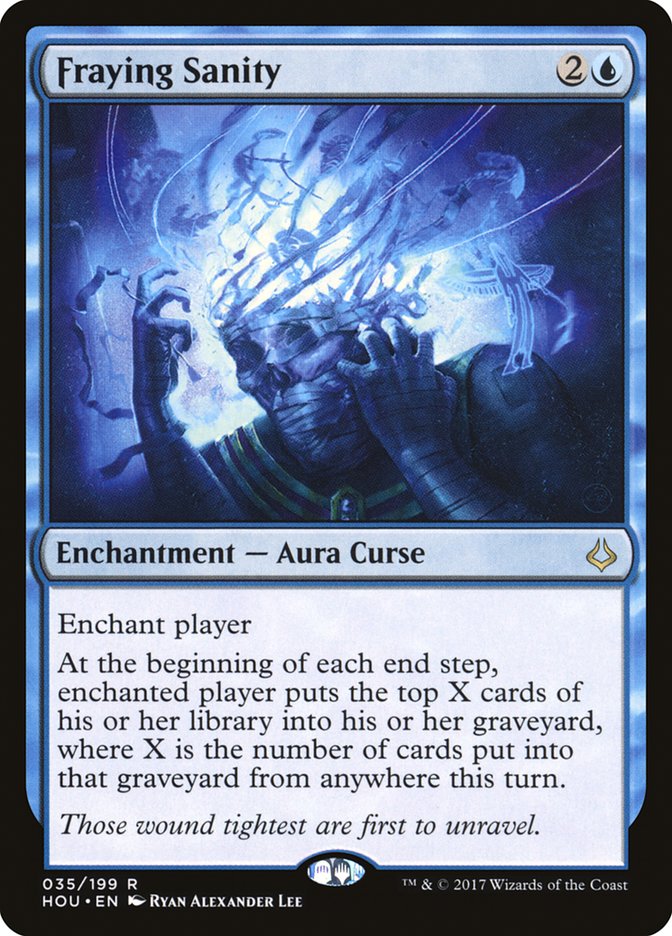 This may be the most powerful mill card ever printed, and it singlehandedly has made mill a real strategy in Standard. It’s unclear how much staying power Fraying Sanity will have when Started Awake rotates out of the format, but I’m not counting this Aura Curse out if it. Even though Fraying Sanity looks like it’s simply a casual card, don’t be surprised when you see it at your next large Standard event.

Five-mana creatures have to be extremely good to see lots of Standard play because there is so much competition at that slot between the different mythics, yet I think Crested Sunmare can get there. I learned from Ross Merriam that you don’t need to play underpowered cards to get maximum value out of Crested Sunmare and that it can simply fit into various midrange strategies just fine. I’m excited to see what tools Ixalan can bring Crested Sunmare and am even considering playing it alongside Courser of Kruphix in Modern. 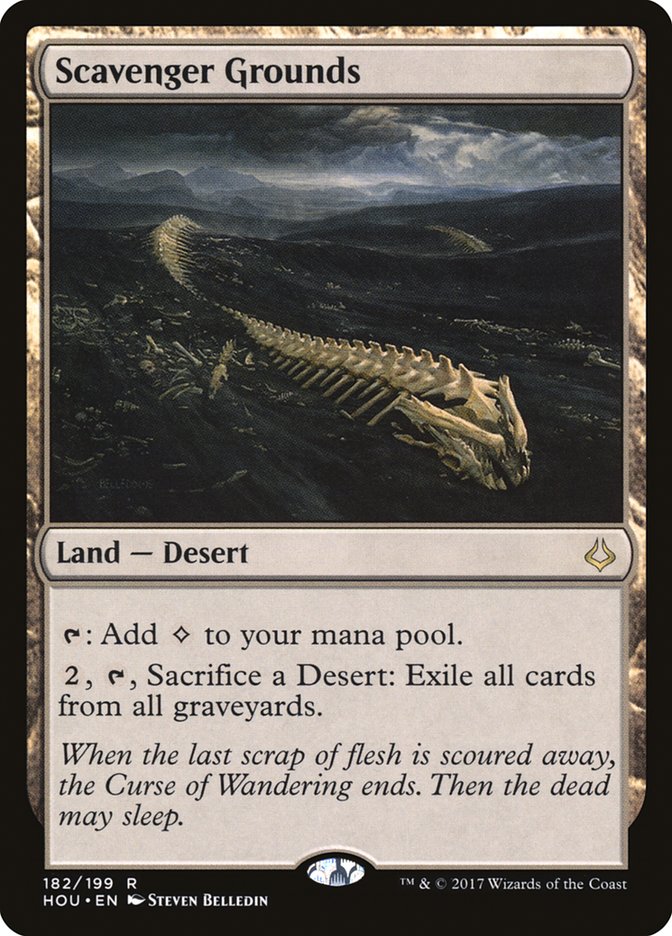 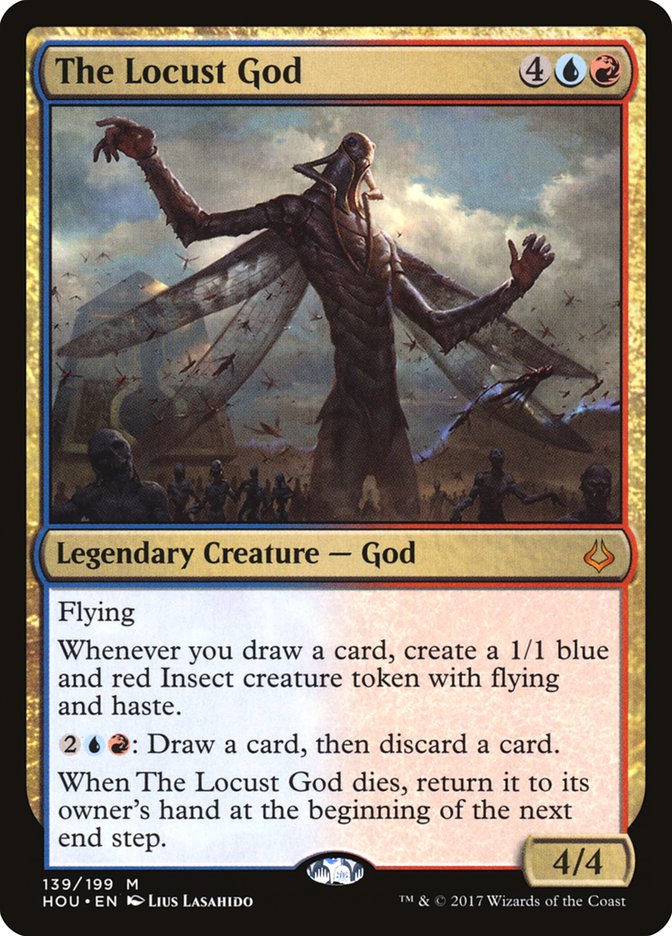 Our second God on the list, The Locust God is very similar to The Scorpion God, which was at number twenty. It has a very high power level on its own and is unbeatable in Limited, but it will most likely have a hard time fitting into Standard. A few problems with The Locust God in the current format are that it doesn’t pass either the Glorybringer or Hour of Devastation test and that it’s competing with Torrential Gearhulk at the top-end of the curve of control decks. I may have The Locust God too high on this list, as where it will slot in to Standard is somewhat of a mystery right now, but I like the upside that the card can deliver. 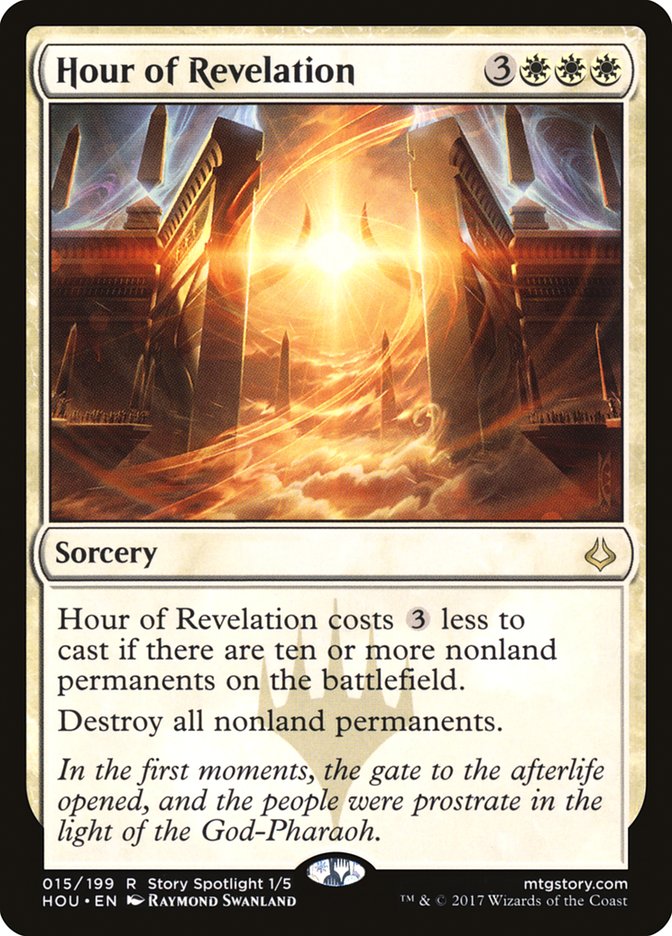 The best white card in the set for Standard doesn’t quite make our Top 10, making it a sad day for people who like to tap Plains everywhere. While Hour of Revelation is certainly an amazing sweeper, playing it means you can’t play the quality enchantment removal in the format in Stasis Snare and Cast Out. This is yet another card from the set where I’m skeptical about how much play it will see, but I could see Hour of Revelation control decks becoming more popular when Stasis Snare exits the format…and Ulamog, the Ceaseless Hunger. 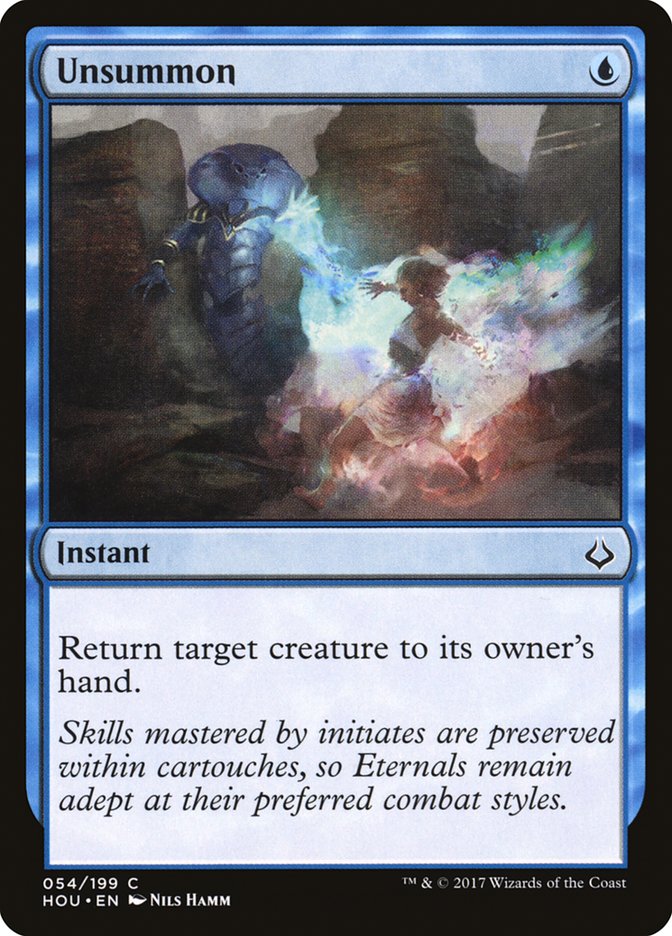 It may only cost a small amount of mana, but it will have a big impact on Standard. Unsummon has been around since the beginning of time ….well, Magic time, that is…. and with the power level of creatures these days it has never been better. There are plenty of ways to make your creatures larger as well, from Longtusk Cub to Verdurous Gearhulk ,and Unsummon can make your hard work go away in an instant. A wonderful tempo play that any aggressive slanted blue deck will be happy to have in its arsenal. 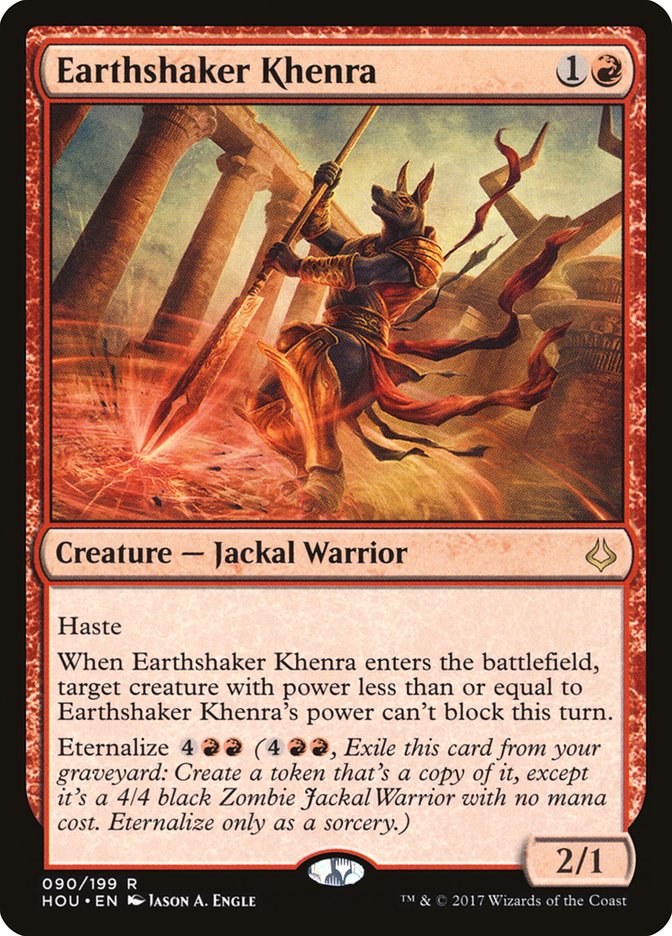 Earthshaker Khenra was the card I was most surprised about after playing #SCGCIN last weekend. A 2/1 for two isn’t a rate that gets anyone excited, but Earthshaker Khenra can put a ton of pressure on your opponent. The ability to eternalize for six mana is extremely relevant because red decks usually lose when they run out of gas in the late-game, but Earthshaker Khenra gives the red deck extra reach it didn’t have before. I may have left this card off my list completely if I had written this a week ago, but I’m all aboard the bandwagon now. 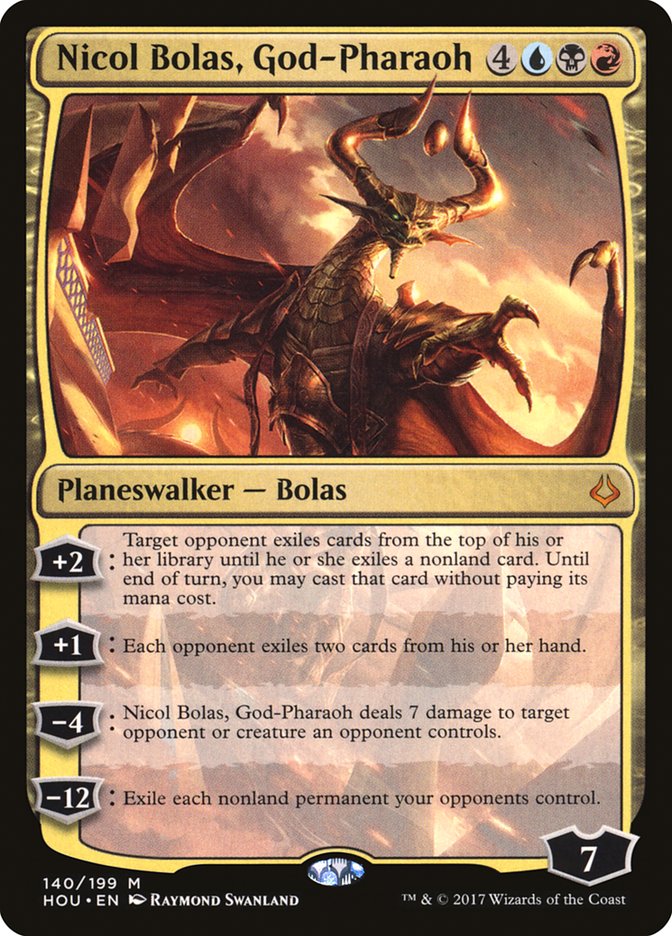 The God-Pharaoh himself only cracks our list at number eight, but that’s still plenty high for a three-color seven-drop. Nicol Bolas, God-Pharaoh is much better than I thought it would be the first time I read the card. The somewhat secret ability that I believe is the most powerful is the +1, which most likely takes the last remaining cards from your opponent’s hand. Even though Grixis Control is the most obvious home for Nicol Bolas, God-Pharaoh, I think the card is good enough to play elsewhere, as evidenced by my Temur-based Five-Color Planeswalkers deck from last weekend.

Our highest-ranked God is quite a tricky card to evaluate. At first glance it looks like you would only want to play this card in a Zombie deck, but it’s much better and more versatile than that. The number of quality creatures in Standard to copy with The Scarab God’s ability is basically endless, and it will take over any game given the time. The reason why I don’t have The Scarab God any higher on the list is because it is still a two-color legendary creature, making it hard to see widespread play. 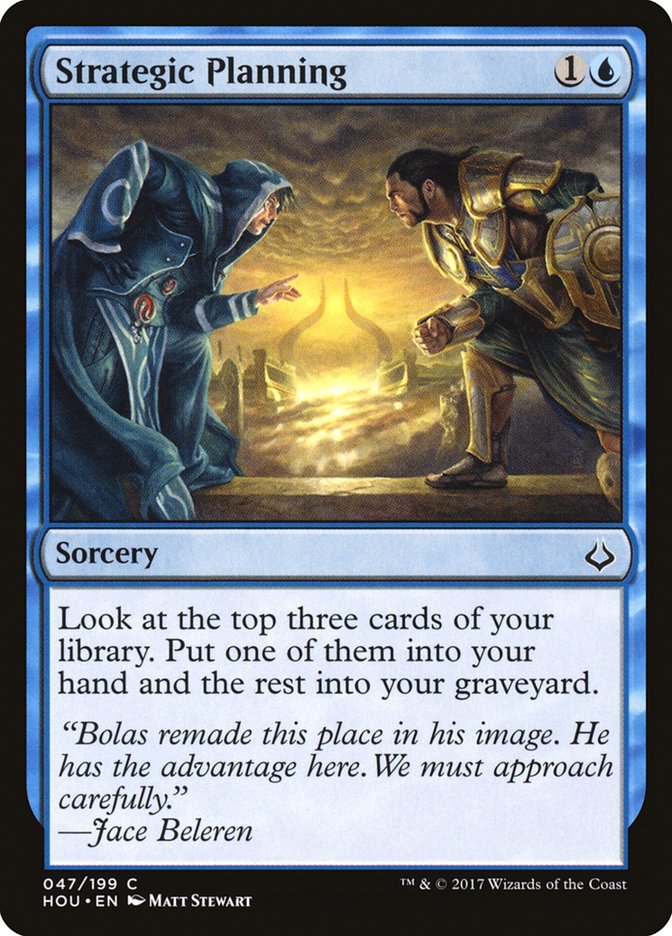 I’ve been very impressed with Strategic Planning since the first time I cast it in playtesting. There are numerous positive synergies with the card in the format that make it even better than Anticipate, a card I was already higher on than most people. Whether in a Delirium, Emerge, or some other graveyard value strategy, Strategic Planning will be a key role-player in many decks throughout its life in Standard. 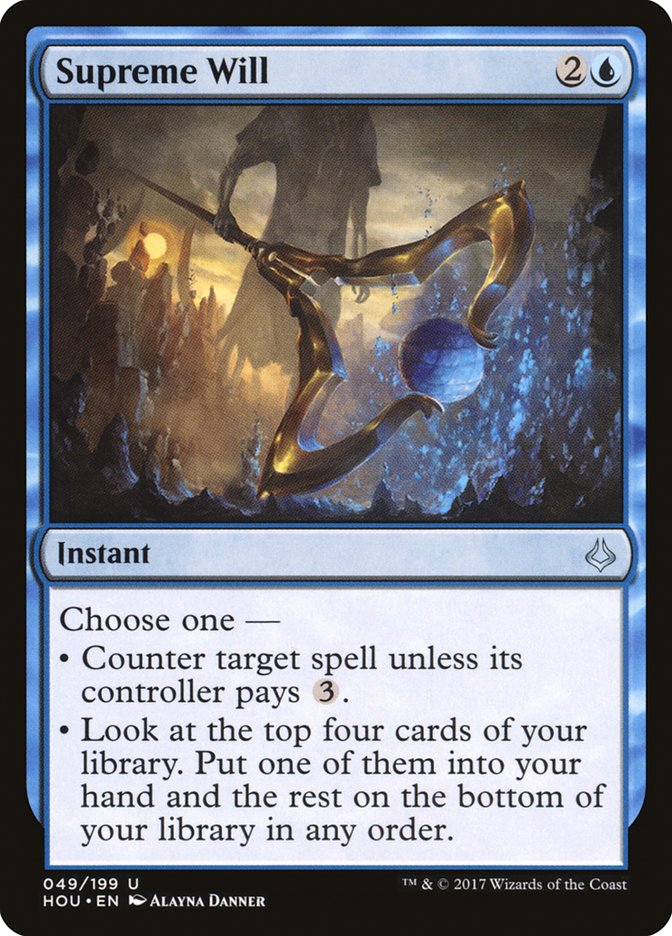 Like Strategic Planning, Supreme Will is simply a good card that will be played by many different decks. Blue mages received quite the options from Hour of Devastation. Supreme Will is yet another perfect target for Torrential Gearhulk, giving one of the best cards in the format even more options. The counterspell part of the card will be the most used, but selecting a card from the top four is an incredible amount of selection when you need to dig for that key sweeper or finisher. 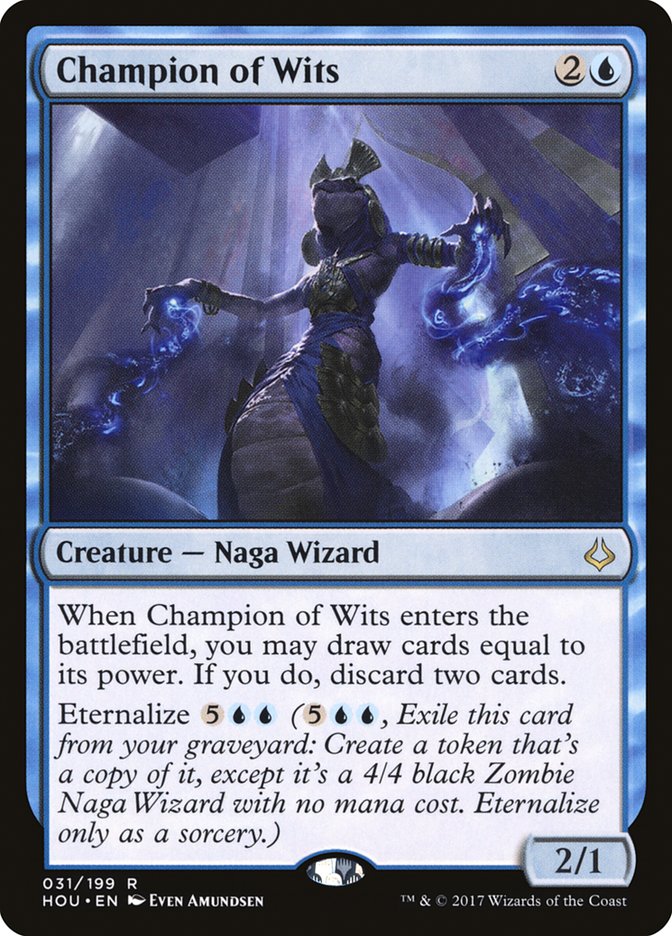 The hits keep coming for blue mages. Champion of Wits is the real deal, and if this list were simply based on the amount of play cards will see at the beginning of the format, then it would be even higher up. Unfortunately, I could see a sharp decline in the amount of play Champion of Wits sees once Elder Deep-Fiend rotates out of the format. For now, though, Champion of Wits does a wonderful job of smoothing your draws out for emerge decks while also being a perfect creature to sacrifice when emerging. That’s not all! Champion of Wits even comes back from your graveyard as a larger creature and source of card advantage in the late-game that can bring Prized Amalgams back with it. Magma Spray has never been so important. Expect to see plenty of this card until the fall. 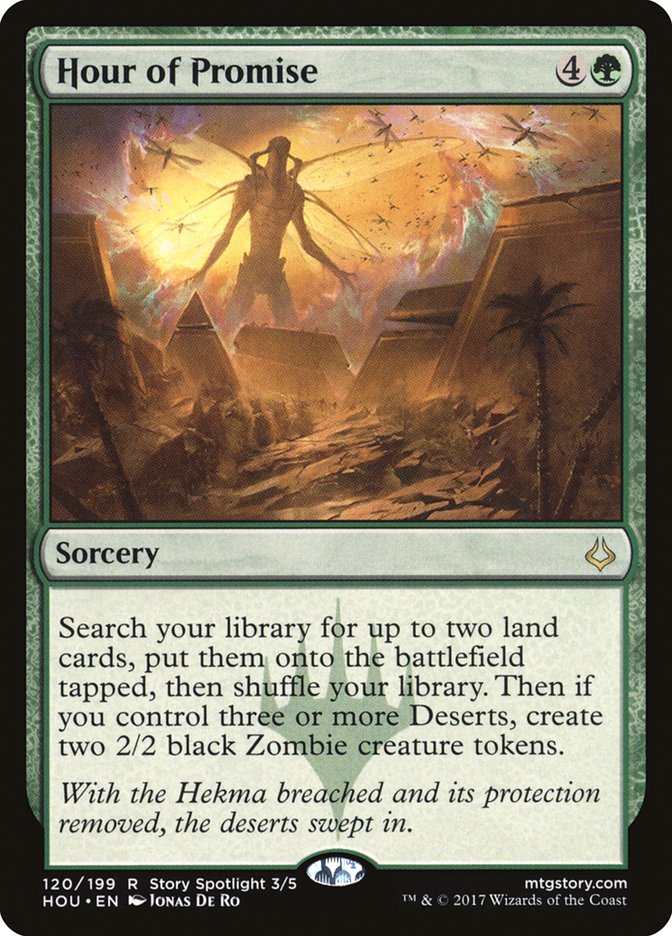 Similar to Champion of Wits, Hour of Promise will most likely see the most play that it will while Ulamog, the Ceaseless Hunger is still in the format, but I also think that we are just scratching the surface on how good this card can be. Ramp decks didn’t perform particularly well at #SCGCIN last weekend, but I also believe that was because people hadn’t found the best builds yet and Ramp decks will be a large part of the metagame post-Pro Tour. Building a Ramp deck that can take advantage of Hour of Promise’s ability to make Zombies as well as cast an early Ulamog, the Ceaseless Hunger is going to be key. Hour of Promise is the most interesting card for me from the set, and I’m still trying to find the best shell for it. 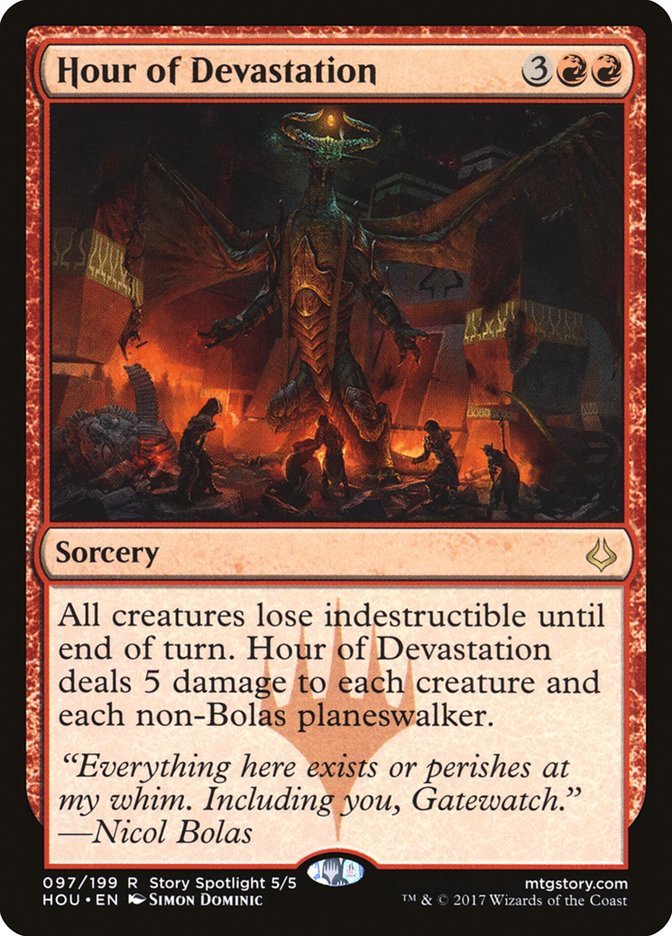 There’s not much to say about Hour of Devastation that hasn’t been said already, but it deserves the hype it’s gotten so far. It’s the best red sweeper that I’ve ever played in Standard and will be a pillar of the format until it rotates. Make sure you have Hour of Devastation in mind when building decks for the format, because you won’t be successful if you don’t and not even a Heroic Intervention will be able to save you.

It’s not glamorous, but Abrade will simply be the most-played Standard card from Hour of Devastation, even though it’s in direct competition with Harnessed Lightning, arguably the best removal spell in Standard, at the same mana cost. That’s really the only question on the amount of play Abrade will see, how much Harnessed Lightning will hold it back. By now I’m sure I don’t need to list all of the quality artifacts in Standard that Abrade can destroy to help convince you of its usefulness. Expect to see plenty of this cheap instant in the coming months.

So there we have it! Those are my Top 20 Standard Cards of Hour of Devastation. What picks did you like or dislike? Are there any cards that you think I was too high or too low on? We’ve already seen the first of this format, but it’s a long way from being solved, and I can’t wait to see what people bring to #SCGATL this weekend and then #PTHOU afterwards.

Speaking of #SCGATL, it will be the debut of Dapper Todd and the Bayou Boys, consisting of me, Tom Ross, and Jody Keith. I’ll naturally be playing Modern because of the recent success I’ve had in the format, with Jody on Legacy and Tom on Standard. Team tournaments are always the most fun, and I can’t recommend enough giving it a chance if you can make it. Hope to see you there!