Paper or plastic? The answer to that age old question is not unlike this dilemma. It is doesn’t matter which way you choose to go-you still end up with a bag.

Josh Bennett told me that I was a heavy underdog in this battle, but I am convinced that I will prevail. I will concede that Ted Knutson has clearly”barned” Mike Flores. But is he a good and proper barn? Mike is going to try and support his claim by pointing out the many instances where Ted name drops Mike and features him in event coverage. But can pointing out Mike’s misplays in the coverage from New Jersey be good form?

Flores:”What, no I didn’t. I just barely won that one, but I played so well.”

Urban:”Mike, if you had laid your Vault first, you would have had two Black mana available and could have attacked with your whole team and equipped the Plating as an instant, thus giving you a win.”

Flores:”Oh, you’re right. Dammit, I got the win right? But now I lose because I look stainsy in the Feature Match coverage.”

Shouldn’t Ted have stepped in and told Matt Urban to shut up in that situation? Shouldn’t he have explained that Mike was holding back the Vault of Whispers because”Mike did not want to reveal too much of his deck”? At the very least he should have simply not included Matt’s comments in his article. Ted not only allowed Matt to humiliate Mike, but was an accessory to it after the fact when he included that exchange in the match coverage.

On one hand, the fact that Ted sought Mike out for a feature match supports Flores’ argument, but it is trumped by the fact that he turned Mike’s triumph into an emotional defeat. Even in Ted’s article [author name="Mike Flores"]Mike Flores[/author] is a Big Fat Idiot he makes a case for both arguments. Sure, sure. He claims that Mike is the best Magic writer of all time, but if you were just glancing at headlines without reading the articles you might not only miss that claim, but get an entirely negative impression. He continues to trump his barn side with his bagginess inside the column as well. Take this little morsel for example:

Flores’s opinion about what the best deck for a particular format happens to be has improved greatly over the years (he’s generally spot-on these days, though part of that should probably be attributed to BDM)

This is an accurate assessment (Mike has often used a stingy”we” when talking about decks. You can translate”we” to mean”BDM showed me this great deck I was completely unaware of and convinced me that it was good”.) and I appreciate the credit here Ted, but I appreciate the support of my case for Bag even more.

To bolster my argument further, let’s look at this excerpt from the same column:

BDM told me a story (which he then asked me not to repeat, to which I would only promise to hold it until the right time), of how he was in his apartment getting ready for a PTQ one morning when someone buzzed their door. Brian asked his wife (Carla) to see who was buzzing them, and she answered,”It looks like some Hispanic grandmother.” Brian replied,”Oh, gotta go, babe. That’s Flores.”

He immediately supports my side of the dilemma by boldly announcing that he has violated the unwritten writer’s code-don’t step on the other guy’s material-especially when they have explicitly told you not to use it anywhere. I was saving that story for a rainy day. Plus he told it wrong! The story is not actually about Mike so much as his moldy old grandma sweater that he always wears.

I live in an apartment building and I was waiting for Mike to leave for a tournament. My wife, Karla (with a K!) noticed that it was past the time I was expecting Mike to arrive and I asked her to look out our window into the parking lot and see if anyone was there. She said,”No, the only person down there is an old Spanish lady.” I hopped up, gave her a kiss on the cheek, definitely did not call her”babe”, and bolted for the door, since that was clearly Mike Flores and his beloved brown sweater. [Guilty of screwing up the story as charged. – Knut]

Mike will attempt to convince you of the correctness of his own argument by showing you an incriminating photo of Ted giving him money to use as modular counters. Once again I think I have the upper hand here with a picture that once again bolsters Mike’s claim a little, but pushes mine over the top. 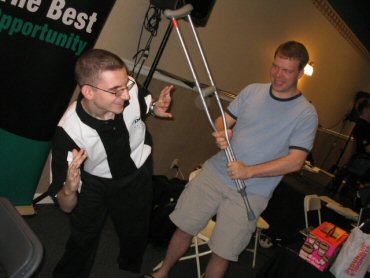 Ted overheard judgling Mike McGee say that he was going to initiate a deck check against Mike Flores. An enraged Knutson leaped up and ripped the crutches from under McGee’s arms and forced him to hop away in terror under threat of a beating.

Before I go, I leave you with this final though: Paper, plastic, or just Ted Knutson?